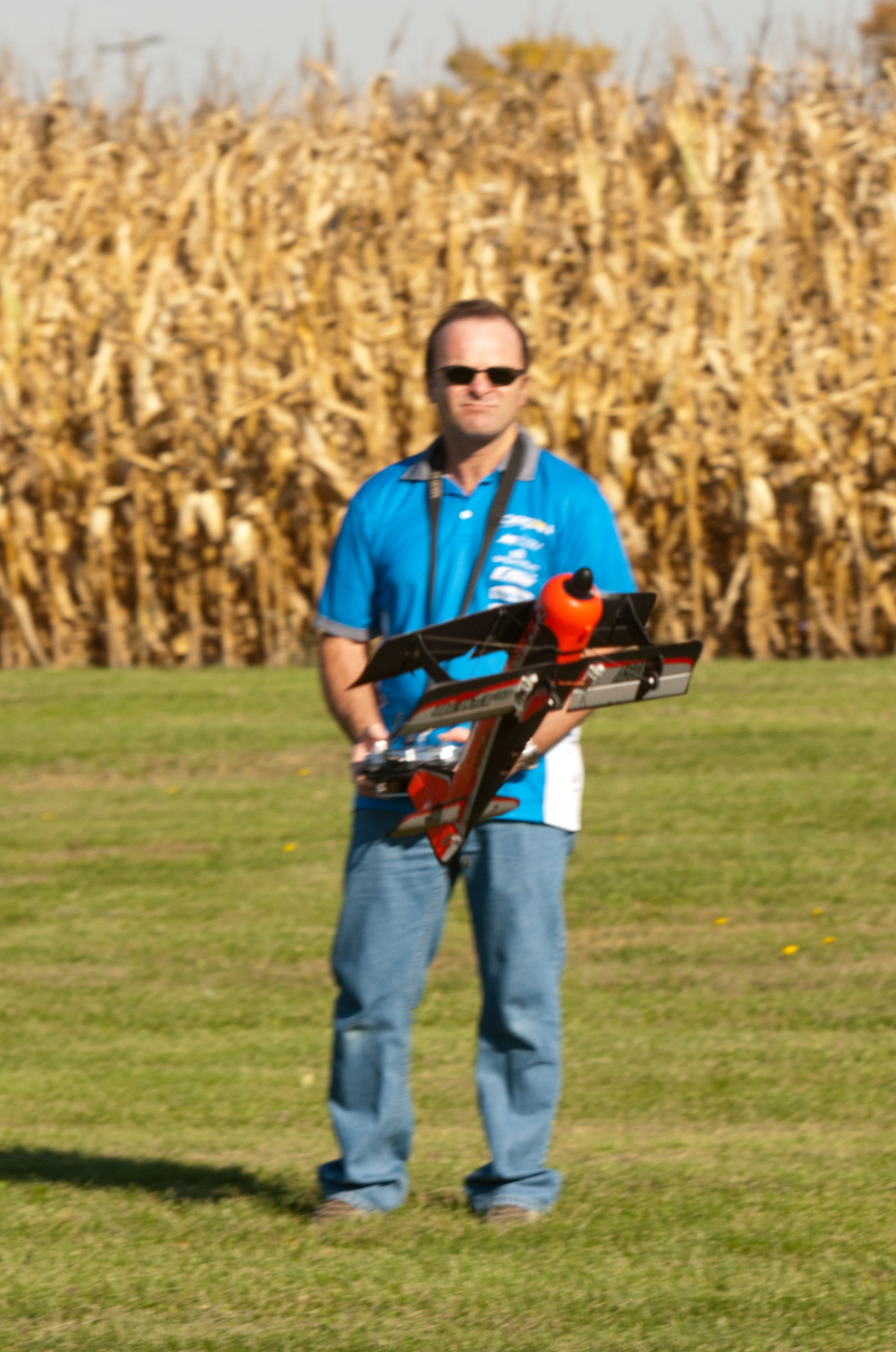 Here’s an article by one of our favorite authors and pilots, Quique Somenzini, who not only helped to invent 3D flight, but also created new moves like the harrier roll. With his tips you’ll be wowing the crowd in no time.

Quique: At the time, I called it the “cobra,” but it soon became more popularly known as the “harrier.” The harrier roll grew out of that basic maneuver, and it is one of the most spectacular 3D moves you can add to your flight routine. Like all demanding maneuvers, it requires a lot of practice to nail down. In this article, I’ll take you through the finer points of the maneuver. 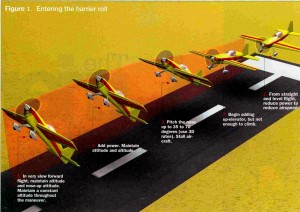 WHAT IS A HARRIER ROLL?

It is important to understand that the harrier roll is a 3D maneuver that requires the airplane to be in a nose-up attitude, i.e., more than 35 degrees, while it maintains a constant altitude during the entire maneuver. If the nose is not that high, you are simply doing precision rolls. The harrier is 3D flying at its best because it requires a true mix of lift and propeller thrust to keep the airplane in the air at well below the model’s stall speed. While flying at a very low forward speed, the nose must be held up; a lot of elevator throw is needed to keep the airplane in the harrier attitude. Now, simply do an aileron roll at the same time, and you turn the harrier into a harrier roll. Basically, all a pilot needs to do is to keep the model’s nose high—between 35 and 60 degiees—while the airplane rolls continuously. This is easy to explain but difficult to do.

As always in aerobatics, perfecting a maneuver takes a combination of pilot skill, proper technique, airplane setup and airplane design. Of course, a lot of practice is also required. Technique. To keep the airplane in the nose-high attitude during the roll requires a graceful mix of risk and finesse. You have to use all four control functions—rudder, elevator, throttle and aileron— with great coordination. If you roll to the left, the airplane will be able to roll faster at a slower airspeed because of engine torque. Start at an altitude that’s comfortable for you but not too high. You’ll want to keep the airplane close enough to see what’s happening. Throttle back to reduce the airspeed, select your high-rate mode, and pull up elevator slowly to lift the nose (but not so much that the aircraft starts to climb). Maintain your entry altitude. Keep pulling until you reach a nose-high attitude of 30 to 35 degrees. By now, the airplane has stalled, but by adding power, you can prevent it from losing altitude. You have just entered the 3D aerobatic world! If the airspeed is correct, even w i th high rates (with aileron travel at around 40 degrees), y o u should have a constant roll rate of about 1 to 1.5 seconds per roll. Use full left aileron, and maintain the nose-high position until you’ve completed the first roll. When you see the airplane start its roll, add right rudder, but don’t go to neutral elevator until the airplane reaches the first knife-edge position. Full right rudder now maintains the nose-high attitude. As you go from knife-edge to inverted, decrease right rudder and push in some down-elevator to keep the nose up. Now, from inverted to the second knife-edge, proportionally reduce down-elevator while transitioning from neutral rudder to left rudder. You should have neutral elevator and full left rudder when you enter the knife-edge position. Continue from knife-edge to upright, and keep doing the same thing: reduce rudder deflection and increase up-elevator until the airplane reaches a fully upright position again.

So, remember: use elevator inputs to maintain a nose-high attitude in the upright and inverted positions, and use rudder inputs in knife-edge positions. How much elevator and rudder travel you’ll need will vary and will depend on the airplane’s position. You should have neutral elevator during knife-edge and neutral rudder when upright and inverted. Positions between knife-edge and inverted/inverted require a mix of the two inputs. For example, while in the 45-degree position between inverted and knife-edge, elevator and rudder are both deflected by about the same amount. As you approach the knife-edge, rudder deflection must be increased and elevator decreased. The technique for flying consecutive rolls is the same; it requires repetition. Once you get the coordination and rhythm down, you will be able to make as many rolls you want. T o exit the harrier roll, add full power and reduce elevator to transition into normal forward flight. Power management. During the maneuver, you’ll see that the airplane will slow down because of the added drag generated by the altitude and the slow forward motion. I suggest that as soon as you start to roll, you add three or four clicks of power, and keep an eye on the airspeed. If you see that the model is losing airspeed, or you feel that you can’t keep its nose up—even with full control-surface deflections—add power. Another symptom of insufficient power is that the aileron roll rate will be too slow. W i t h proper throttle management, your airplane will feel light. 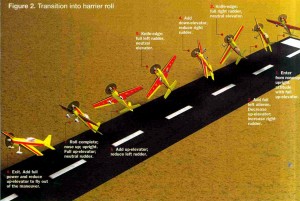 >Practice with your airplane flying into the wind.

>Always use the throttle. Throttle control is very important to keep the airplane flying at the same level altitude and to hold its nose up. It makes all the difference.

> Don ‘ t use your smoke system until you are used to flying this maneuver. Sometimes, smoke hides the airplane and makes it hard to see what’s going on.

>Practice the harrier roll in both directions—left and right. Keep in mind that the roll rate to the left will be faster at slower airspeeds because of torque.

> F l y the harrier roll at lower altitudes only when you are 100- percent confident of your ability to execute the maneuver.

>Never change the aileron-stick’s position. The ailerons should stay at full deflection at all times. T o keep the roll rate constant during many consecutive rolls, adjust the throttle slightly to increase or decrease airspeed.

As with any 3D maneuver, you’ll use high rate for the harrier roll . Rudder, elevator and aileron must travel to their maximum deflections if you’re to perform the maneuver properly. High rates will also help you to recover from unwanted situations, especially at the beginning, when you’re learning. Remember that the slower the airspeed, the higher the travel rate you’ll need to keep the airplane flying within the 3D window. For rudder, it can be slightly different. I fly Mode I, and I have a tendency to fly with a more sensitive rudder than Mode II pilots. If you fly Mode I I , it might be best to set up rudder for about 80 percent of its total travel. Exponential is also very important to dialing in the right feel. Never try to use too much exponential, as this will cause you to be too late with your control response, especially with the elevator. I find that less exponential on the rudder and elevator is better for the maneuver because of the high roll rates and the continuous rudder and elevator-stick movements. Higher exponential gives a softer feel around neutral, but it can slow your control inputs. As always in aerobatics, you need to find an exponential setting that is a good compromise for the maneuver and for the rest of your flight routine. I think you should also keep all your special programmable mixes active. Your airplane should perform at its best and fly as straight as possible with regard to pitch- and roll-coupling.  Aerobatic flying remains a combination of pilot skill, flying technique, airplane design and radio setup. Having to learn to get the best out of yourself and your plane is why 1 think aerobatics is one of the most challenging segments of aeromodeling.