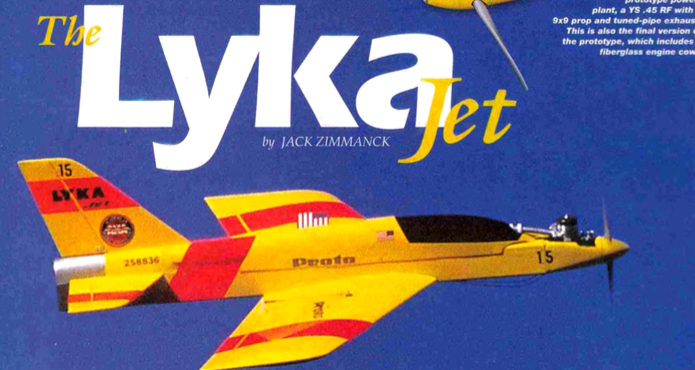 The first time I saw the fast, smooth flight characteristics of a ducted-fan model, I was hooked, but I did not want the temperamental operation and expense that often go with these exciting and graceful birds. I tried a couple of the prop/jet look-alike kits. They looked OK, but the performance and flight characteristics were not even close. What I wanted just was not available. That left me just one alternative.

I decided the best way to achieve the shape, balance and weight for the Lyka Jet was to design the airframe, “from the inside out,” around the components. I weighed the engine, pipe, tank and radio gear and dumped hem on the workbench over a blank sheet of drafting paper. I began to develop the long-nose, short-coupled jet silhouette that distinguishes the Lyka Jet. The swept wing and the tall, swept fin further define the Lyke Jet profile. The final touch of jet realism was to route the exhaust out through the rear of the plane. I chose a .40-size engine since it is fairly inexpensive and can easily be set up to turn the necessary rpm. The power system for the prototype was an O.S. .46. rear exhaust with a tuned pipe, a 9×9 APC prop and an 8-ounce tank. To keep the cost down, all servos were Futaba S148s with ball-bearing kits added to keep the controls slop free.

The name? Everyone who saw the prototype said it really looked and flew like a jet.

To read more, click the link to open the PDF: