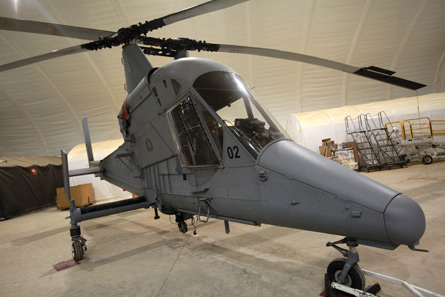 In this news story, Alex Healey of Flight International shares news of a new unmanned helicopter that will be used for delivery operations:

Perhaps because purpose-built unmanned air vehicles have become a fact of life in the skies over Afghanistan, the introduction last December of a full-size helicopter, converted into an “optionally piloted” airborne delivery truck, generated little attention. Yet the unmanned Kaman Aerospace K-MAX represents, arguably, not only a greater technical achievement but a bigger step towards a future where commercial aircraft with empty cockpits ply their trade.

Expensive piloting skills are no longer required within Marine Unmanned Aerial Vehicle Squadron 1. Whenever one of the two K-MAX currently attached to its Cargo Resupply component is tasked, an NCO (not pilot-qualified) climbs in and starts it up. He then switches control to another NCO at the nearby main operating base, climbs out and walks away. NCO No 2 presses a button to send the helicopter off on its flight plan. At its destination, a grunt in a foxhole guides it to the landing zone with a games console. When it lands back at base, another operator gets back in and shuts it down. 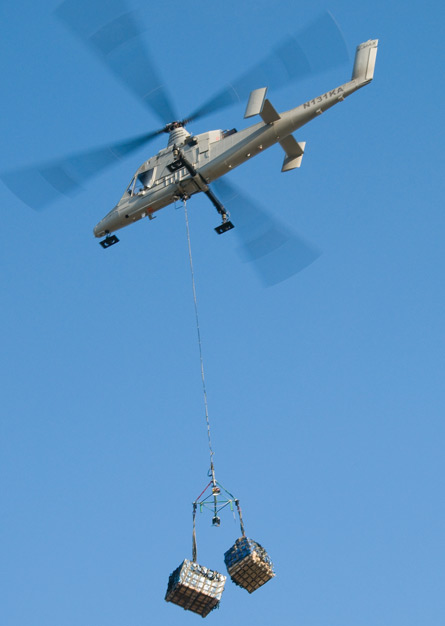 AUTOPILOT FUNCTION
The helicopter flies five or six missions on the trot, invariably by night and at altitude, guided either by its autopilot along GPS waypoints, or by a ground controller. “Handling” of the flight controls remains an autopilot function throughout.

K-MAX features a four-hook cargo carousel that allows it to deposit loads at multiple locations during a single round-trip. The platform can be re-tasked at any stage. The outbound loads typically contain food, water and ammunition but there is the opportunity for two-way traffic, for example if the patrol needs to return equipment for repair.

During earlier trials in Arizona, the helicopter dropped 10 GPS-guided JPADS (parachute-steered payloads), two of which were released remotely from the ground control station. Four parachutes with containers, each weighing 1,100lb, were airdropped at two- to three-second intervals, from 2,000ft AGL at 60kt airspeed.

Maj Kyle O’Connor, detachment officer for MUAVS# 1 who is overseeing the deployment, says that the Marine Corps had been looking for ways to get trucks off the road for some time. “We wanted a fast, reliable platform to resupply our combat outposts without putting Marines in more danger of IEDs.”

Serviceability has been high, with the helicopter requiring less than one maintenance man-hour per flight hour. “It’s such a new system that there isn’t a lot of reliability data,” says O’Connor. “The latest extension will give us more time to gather performance data from [within] the operational environment.”

The K-MAX first came to the notice of the USMC in 1998, when Kaman demonstrated its BURRO (broad area unmanned responsive re-supply operation) concept in the Arizona desert. The idea was to resupply Marines beyond the line-of-advance during a beach assault, without putting lives at risk. It is a tactic currently little in demand. These trials never dispensed with the pilot altogether, but there was talk of a single, manned K-MAX supervising a gaggle of load-carrying UAVs.

Click here to read the complete article at FlightGlobal.com.