This is the Yellow and Red Shoestring racer built from the May 2010 MAN Bonus Pullout Plans set. It is designed by master electric model designer and builder Pat Tritle.

The designer of the full-size ‘Shoestring” racer, Rodney Kreimendahl, made his home in Westfield, MA. As a young man, Rodney was an avid modeler and he was greatly influenced by the exploits of Charles Lindberg. He loved airplanes, but never became a pilot. After high school, he didn’t attend college but did win a scholarship to Northeastern University and later became a draftsman for Chance-Vought. Prior to WW2 he was recruited by the Lockheed Aircraft Corp., as a structural designer where he worked on the Lockheed YP-38 project. 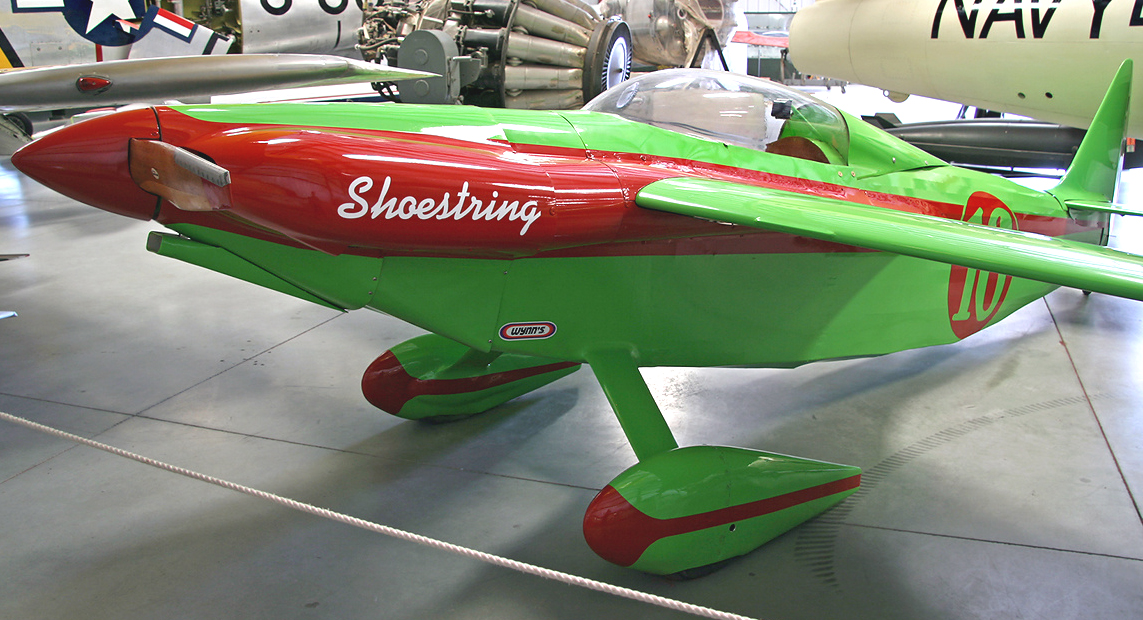 Retired to the San Diego Air Museum in 1981. Though it went through several design changes and paint schemes, the colors of the original Shoestring were Cadillac Chartreuse and Chinese Red.

Before the war, the Cleveland Air Races were the biggest event for aviation enthusiasts and in 1947 a new class of air racers was started called the Goodyear class. Often referred to as the “midget class” this class as an alternative to the very expensive Unlimited race class. The new class had specific airframe requirements and a max engine displacement of 190ci. The 85hp, 4-cylinder, air-cooled Continental engine with its 188ci displacement was the engine of choice and it quickly became the standard Goodyear powerplant.

Lockheed started a design team to develop a plane for this class, which eventually became known as “The Cosmic Wind.” Since there was plenty of interest in racer planes at the time, Rodney started another team where he did most of the design work for a new racer. Rodney’s wife was asked to name his new midget racer and she came up with “Shoestring”—since the airplane had been built on a shoestring budget. Each of the design team’s members chipped in a dollar each week during the plane’s construction and it was eventually finished minus the single most expensive item—the engine. The Shoestring made its first flight in 1949, powered by a loaner engine acquired from race pilot Bob Downey. After the Shoestring project, Rodney went on to work on other Lockheed projects including the X-7 (an unmanned test bed for ramjet engines,) the F-104 Starfighter, the vertical take-off XFV-1 Salmon fighter and the U-2 spy plane.

In 1965, an airlines pilot named Ray Cote bought the original Shoestring aircraft and with the help of Carl Ast and Paul Jones, he started an extensive modification program for the race plane. The Shoestring was Ray’s first racer and in his 16 years of ownership, he won 41 races including nine national championships before he retired the plane to the San Diego Air Museum in 1981. Though it went through several design changes and paint schemes, the colors of the original Shoestring were Cadillac Chartreuse and Chinese Red.