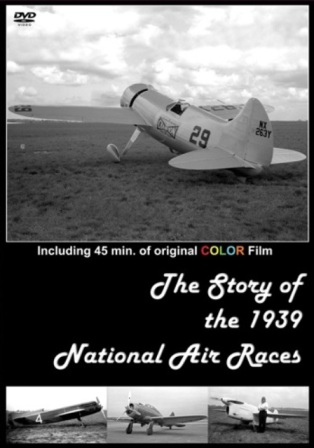 Joe Stamm, co-founder of the film production company, stated, “Our second documentary film on DVD is an in-depth look at the 1939 National Air Races. The 1939 races were significant in that they were the last of the National Air Races to be held before World War II. The 1939 races signaled the end of an exciting and significant “Golden Age” of aviation which saw new speed records set and numerous aeronautical advancements achieved by private citizens through air racing rather than by governmental-funded military aviation.  Our DVD uses hundreds of archival pictures and original film set to a narrated story that positions the 1939 National Air Races within the context of aviation and world events of the time. The DVD recounts all the drama and the inside stories of the races, and presents, in great detail, all of the thrills, triumphs, and tragedies of the 3-day, action-packed event!”

The 90 minute DVD contains over 45 minutes of extremely rare, very high-quality, COLOR, 16-mm film from 1939! “In all of my years of researching air racing, this is the most outstanding footage that I have come across…and to have been filmed in full, true color in 1939 makes it truly remarkable”, added National Air Race Project LLC co-founder, Joe Keenan.

Among the famous aviators and planes competing in 1939 were Roscoe Turner and the LTR-14, Steve Wittman with “Bonzo,” Tony LeVier and the Schoenfeldt “Firecracker,” Art Chester with “Goon,” Jackie Cochran, Paul Mantz, Earl Ortman, Frank Fuller, Harry Crosby, Art Bussy and the other talented men and women pilots of the “Golden Age” of aviation.

The DVD not only provides detailed coverage of all the races and the pilots, but also captures the military maneuvers and displays…Air Corps P-36 Curtiss Hawks from the 27th Pursuit Squadron at Selfridge Field in unusual camouflage paint schemes; the Navy “Red Rippers” in their Grumman F3F “Flying Barrels” from the aircraft carrier, USS Ranger; the huge, one-of-a-kind Boeing B-15; a Bell XFM-1 Airacuda; B-17s and many, many more.

The DVD even provides coverage “behind the scenes” with the pilots and ground crews as they fine-tune, test and qualify their planes in the days before the official races began.

As special extras, two appendices, which cover the detailed race results and the daily event schedules, are included on the DVD.