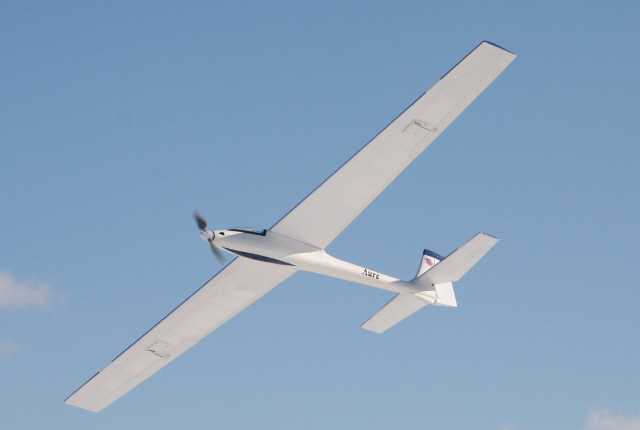 The variety of planes offered by The World Models and distributed in the U.S. by Airborne Models is notable.  I was lucky to get my hands on one of their newest powered gliders; The Aure, aptly named as Aure translates from a close Latin word variant into “Wind”.  Provided in the 2-meter class of powered gliders the Aure is designed with a streamlined and vented fiberglass body, balsa built-up wing and multi-colored Lightex high performance airfoil.  Offered as an ARF, which includes a folding prop the end user provides the radio, motor, ESC, 24 inch extensions and battery.

As an ARF, the build is very simple.  The World Models does a great job of photo illustrating and diagramming the instructions consistently with all their models.  Components and replacement parts are available through Airborne, but the motor is something that will require some measuring if you chose to use anything other than the KM0283010 motor suggested.  The fit is precise with little room for side or depth clearance.  Inside the fuselage there is plenty of room for all the other electronics.  The huge clear canopy even though glued is just itching for a video camera or pilot figure.

This is a four channel aircraft designed for soaring with dynamic wind or thermal lift.  Ailerons are out near the wing tips and in the hands of a seasoned soaring pilot the Aure can reach pretty good speeds while maintaining acceptable wing penetration. Aerobatic performance is good.  As a powered glider it climbs well, but not vertical.  It has flying qualities of much more expensive gliders, with the added comfort of some power when you need it for just over $100.

A nice high performance element of the Aure is the hidden internal elevator linkage and full deflection elevator that rotates the entire elevator around a single point making response quick and with authority.  When you consider the surface area of the elevator as it all moves you quickly realize just how little movement you need for control, but also how much you have available for extreme aerobatic configurations.

I experienced a few difficulties in the building of the Aure.  First the motor specified did not quite fit into the motor mount as the clearance from the front to the back was too tight.  I was able to grind out some of the bulkhead, but in addition to the depth the wires for the designated motor come from the front of the motor and must pass along the side of the outrunner.  Without attention to clearance the wires will rub and short out.

Because the motor mount bulkhead is molded into the fuselage, movement is impossible and the motor shaft must mate with the prop hub and spinner with about a ¼ inch of clearance between the fuselage and spinner back plate.  A tool is available to then grip the prop hub to tighten it or you can make one, but in my case the clearance was more than I wanted leaving a large gap.

The biggest difficulty I experienced was weaving the long 24” extensions through the narrowly cambered wing ribs.  One must keep the servo plug in perfect alignment with the draw string or the plug will not pass through the ribs.  The servo connections as well must follow the leads through the holes perfectly or they too will hang up.  Servo extension security clips will not fit.  I spent a great deal of time working on getting the leads through and eventually broke the draw string.  I suggest you replace the string immediately before trying to pull the servo leads.  Otherwise, you not only can get hung up pulling toward the wing root, but as well trying to pull it back to start over.

I originally intended on using a smaller 2100 mAh battery, but could not get enough weight forward to meet the CG requirements.  In the end I used a 2550 Eon Lite Flightpower battery to get as much weight forward as possible.  There is little room to add weight and even with the larger battery I stayed under the 1500 gram suggested flying weight.

The wings are not bound together with glue and use two wing spars to stabilize the movement and a thick center rib forward attachment point. The wing is straight.  Servos are mounted under servo doors.  While the wings use 9 gram servos, the rudder and elevator use standard servos.  I installed Corona’s 2.4GHz 6-channel receiver and their 2.4GHz transmitter module into my Hitec  Optic 6 and was very pleased with the system.

If for no other reason the Aure’s pricing is something of note.  This is a very well made powered glider and one that is capable of flying in all types of conditions.  The aforementioned building difficulties can be overcome with patience and with a few minor tweaks the Aure has all the characteristics of very high-end gliders.  If I had one recommendation it would be to fit up front a higher KV motor to give the Aure more vertical performance.

The Aure was previously offered as a true glider, but was discontinued in favor of this Aure version with power.  Obviously, power means no need for a starting method other than a slight toss into the wind.  This is a big plus.  There is good power available for hand launching, but the Aure is not wanting to jump out of your hand.  The climb outs are gentle.  First flights will be exciting as the elevator has so much control even a slight setup error will be noticable.  It took several bumps on the trim to push the nose down.

I typically mix in some rudder and elevator with the ailerons and had to turn that off as I had way too much of both during the initial flights.  I ended up in the mix with just a few degrees.  The rudder has the greatest amount of control over the Aure.  Even though the ailerons are near the wing tips, the big 2-meter wing needs help getting the tail to coordinate the turn.  At times, I found myself burying the rudder to maximize the quickness of the turn.

You will notice I dialed up the expo for my HiTec radio in relation to the elevator authority.  This is really a must or the Aure will react too quickly.  This is especially true into the wind.  While the penetration is good, one must keep everything behind the nose as clean as possible in the slip stream or the Aure will pitch.

In flight I thought the motor and prop made the Aure just a little lethargic.  I wanted to hit the throttle and climb to the clouds, but that was not the case.  The power curve is smooth, but not as responsive as I would have liked to see.

Stalls are quick.  The left wing tip will drop almost vertical and once the stall is initiated there is nothing one can do to stop it without adding airspeed.  With more power at the prop this could be improved.  At low altitude this is critical.  Approach speeds must be maintained with little movement of the ailerons.  I found the best approach to be setup with along gradual final letting the Aure find its way to the runway with little radio input.  One has to be cognizant of the length of the wing as a ground strike can occur three feet above the runway.

CG 75mm ahead of main spar

>Stability – The Aure handles well with a slow response rate on the ailerons and a quick elevator.  Airspeed is critical.

>Tracking –The ailerons will stand the glider completely on edge, but the rudder plays an important part in keeping the Aure aerodynamic.

>Aerobatics- The Aure loops easily with the large elevator, but rolls are large. Again the elevator helps with inverted flight and through that portion of the rolls.

>Glide and stall performance – With a low wing loading the glide is very good, but the ailerons at the tips of the tapered, thin wings will stall with low airspeeds.  On approach you must be gentle or the Aure will quickly stall.

The Aure is an economic way to get into slope or thermal soaring.  It has the benefit of power to get you out of some trouble and when flown well can give hours of flights time in the right conditions.  It is not a difficult plane to master and each flight will present new knowledge about the Aure and how it handles.  This a great plane to try for someone wanting a glider with a high performance design good flight capabilities and great looks.

·        Blue streak on the bottom of the fuselage for visual in the air.  Otherwise the bottom is all white.

·        Large area in fuselage for electronics 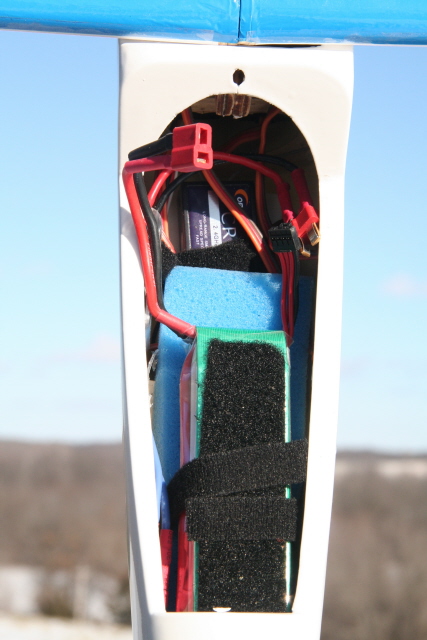 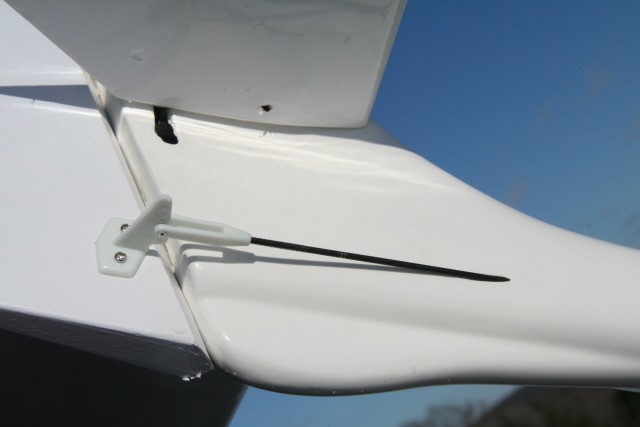 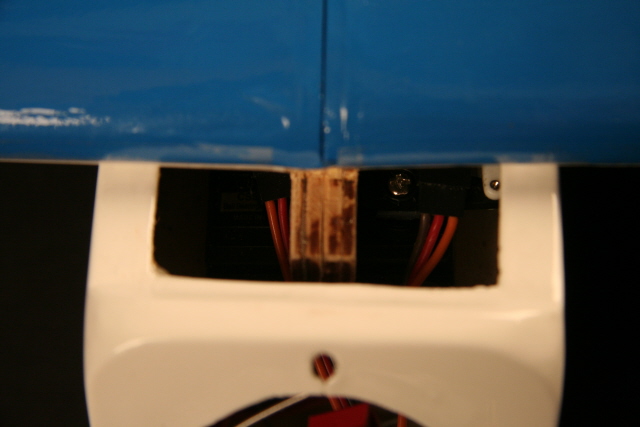 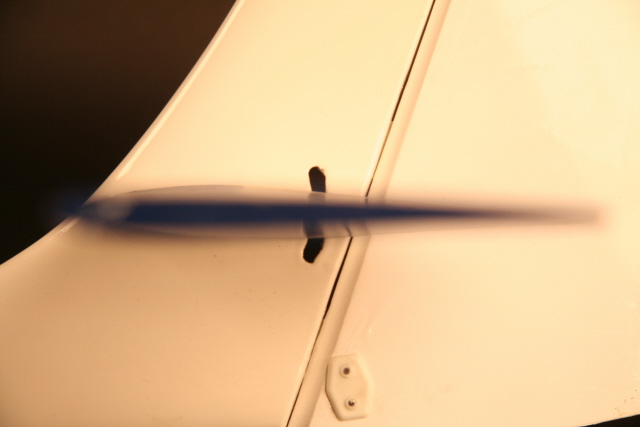 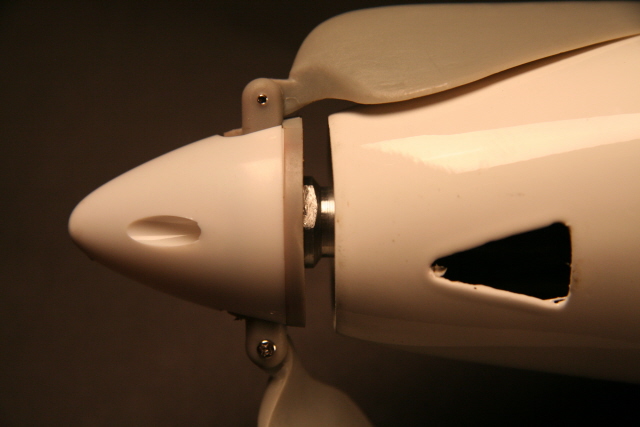