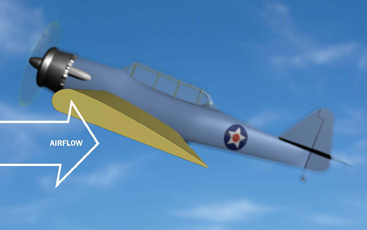 The stall, or more accurately the inadvertent stall, has probably caused more RC planes to crash than any other cause. The safety of your airplane depends on your knowledge of its slow-speed handling and stall characteristics. To minimize the number of crashes due to stalls, the pilot must understand the principles of what makes a plane fly and how to make practical use of the information.

First, we must understand how the wing supports the plane in flight. As the plane moves through the air, the amount of lift is determined by the particular airfoil and its angle of attack (AOA). The AOA is the angle formed by the wing’s chord line and the oncoming airstream. The other primary factor in the amount of lift is the speed of the airfoil through the air. A stall will occur when the AOA exceeds the wing’s critical angle of attack. At this angle, the lift suddenly decreases and the drag increases, resulting in the plane losing altitude very rapidly. The pilot has control over the AOA with the elevator. For example, if the pilot inputs up-elevator the tail drops and the nose rises, which increases the wing’s AOA. An important point to note is that the plane can be moving in any direction, including straight down, and a stall will occur if the AOA is exceeded.

The only way to recover from a stall is by decreasing the angle of attack below the critical angle by pushing forward on the elevator. By learning your plane’s slow-speed and stall behavior, you should be able to avoid getting into an unintentional stall situation in the first place. Take your plane up high; reduce the throttle while increasing the elevator deflection to maintain your altitude. As it slows, note how the plane reacts to your control inputs, and when it does stall, note if a wingtip drops or if it stalls straight ahead. Recover from the stall by lowering the nose to gain flying speed. Adding power will speed the recovery and minimize altitude loss. Practice this until you can recover with the wings level. All models stall differently, so you’ll want to learn your model’s characteristics.

Spins are an exciting aerobatic maneuver when done intentionally, but an unintentional spin close to the ground will spoil your day. A spin cannot occur unless the plane is stalled. If at the moment of stall there is a yawing moment, an autorotation will commence. The spin is caused by a complex series of events. If rudder is applied as the wing stalls then it will cause one wing to drop. For instance, if left rudder is applied with up-elevator, the left wing will move downward and rearward resulting in a left roll. The left wing will therefore have a greater angle of attack and slower speed relative to the right wing. The right wing will essentially be less stalled than the left wing resulting in autorotation about the spin axis. In the fully developed spin, the aerodynamic and inertial forces are stabilized into a predictable pattern of rotation. The rotation, airspeed and vertical speed are stabilized and the descent path is vertical. Unless something is done, the spin will continue.

Turns in the landing pattern can lead to spins if a skidding turn is attempted. A skid is when too much rudder is used for a given bank angle. Often a pilot will use rudder when overshooting the turn in order to avoid a steep bank angle. This is the recipe for a spin. If you find yourself in a spin, most planes will recover easily by letting go of the controls and letting the speed build up. Some high-performance planes require opposite rudder and/or down-elevator to recover. Use caution during the recovery as the speed can build up quickly. Also, avoid a secondary spin during the recovery by not using excessive up-elevator. Every plane has its own peculiar spin characteristics, so make sure you try spin recovery at high altitudes.