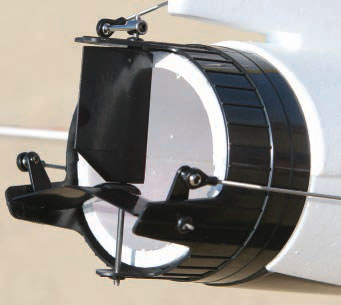 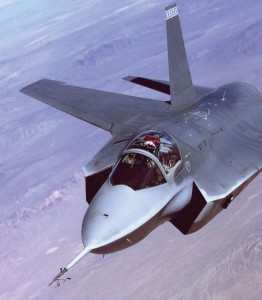 One of the most advanced jet aircraft in the world is the Lockheed Martin F-35 Lightning II. It uses thrust vectoring to maximize its performance and maneuverability.

Lately, there have been RC jet designs that perform amazing maneuvers and seem to have something extra. This new breed of agility owes its success to one thing— thrust vectoring. As with full-size aviation, model designers have been tweaking and experimenting with their planes to make them as maneuverable as possible. It’s little wonder that RC has now added the advantages of thrust vectoring to several new aircraft. But what it’s all about?
Let’s take a closer look 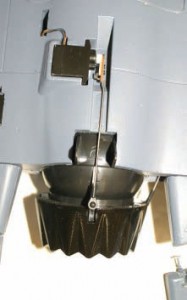 By definition, thrust vectoring (TV) is an aircraft’s ability to direct its main engine or engines’ thrust in a direction other than parallel to the aircraft’s longitudinal axis. The technique was originally envisioned as a way to provide upward vertical thrust to improve vertical takeoff (VTOL) or short takeoff (STOL) and landing performance. The best-known example of thrust vectoring is with the Rolls-Royce Pegasus engine used to power the Hawker-Siddeley Harrier jump jet. Often during flight tests, Harrier pilots would use the aircraft’s swiveling thrust deflectors to perform much tighter maneuvers than normally allowed by the aircraft’s aerodynamic design. Thrust vectoring experiments with the Harrier, also called “Vectoring in Forward Flight” or (ViFFing,) was discouraged by the Royal Air Force and Royal Navy, but  encouraged and actively practiced by the U.S. Marine Corps. This control technology quickly led to thrust vectoring
nozzles being installed on various experimental X-planes where vectored thrust was deployed in directions other than
down. 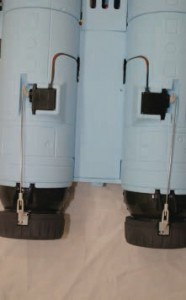 This twin motor Su-34 shows off its simple 180 degree TV control setup. With two servos, it provides both pitch and roll control.

The newest generation of twenty-first century fighter/attack aircraft uses every possible design augmentation to gain the advantage in air combat. A list of modern jet fighterbomber aircraft utilizing TV exhaust nozzles includes the Mikoyan
MiG-29, the Sukhoi Su-34 Fullback, the Lockheed Martin/Boeing F-22 Raptor and the Lockheed Martin F-35 Lightning II. What’s on the drawing boards for future fighter aircraft design has yet to be seen, but one thing is for sure—they will all have some form of exhaust thrust vectoring to maintain air-superiority. Though there are some experimental propeller-driven RC aerobatic models. using TV to improve 3D performance, for this article, we are talking specifically about jets equipped with either electric ducted fan (EDF) exhaust nozzles or with pusher-prop setups. 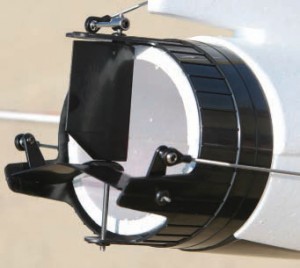 Here is the Vane control setup for the Phase 3 Squall EDF jet. Notice that all the linkage is attached to the control surfaces so no complex mixing is required.

By design When it comes to vectoring (directing) our aircraft’s thrust, there are two ways to go. One setup uses moving control vanes to deflect the airflow exiting a fixed nozzle and another way is to use a swiveling nozzle. Though deflector
vanes are an easy way to add TV to a jet, they can spoil the exhaust’s airflow making it a bit less efficient. With a free-flowing swiveling nozzle, very little thrust force is lost. With a pusher prop setup, the entire motor/propeller assembly
is mounted to a hinged or pivoting motor mount which, like the exhaust nozzle and deflector vanes, are then moved by servos and ridged pushrods.

The simplest form of TV (in the pitch of the axis) is “two dimension” vectoring, also considered 180-degree thrust vectoring. In this setup, all you need is a single, fixed rotation point and linkage to move the nozzle or motor/prop assembly up and down. Of course, you could also use 180-degree setup in the yaw axis (working with rudder) but pitch control (elevator) is much more useful for controlling your plane. Pitch vectoring allows much tighter loops and can actually make your jet do flips. In the real world, the MiG-29 became famous for performing the amazing Cobra maneuver
using pitch vectoring. A single TV nozzle or motor/prop setup combining both elevator and rudder (pitch and yaw) is called “three dimension” vectoring and is often referred to as 360-degree thrust vectoring. This setup requires two channels (elevator and rudder) and is a bit more complicated. With 360-degree thrust vectoring, your single motor
jet can perform all sorts of advanced loop and flip maneuvers including as well as incredibly flat spins and extremely high-alpha slow-speed flight.

There is, however, no way for a single thrust vectoring power system (either 180 or 360 degrees) in the roll axis. To take advantage of TV for improved rolling performance, you have to use a pair of power systems and mix them to work with the aileron channel so they move in opposite pitch directions. Programmable radios make this fairly easy to accomplish without the use of complicated linkages. 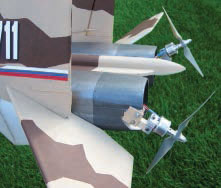 Pusher prop jet designs are also very popular, and several take advantage of TV control. For these setups, the only real difference is that the power unit is external and the thrust is totally unrestricted during changes in thrust angle. Longtime contributor Steve Shumate has been designing foam pusher jets for several years and one of his most popular designs is his Su-37 Super Flanker Park Jet that was featured in the July 2008 issue of Backyard Flyer. To keep the force of the power systems isolated from the lightweight foam fuselage structure, the TV motor mounts were made from strong 3⁄8-inch square hardwood sticks with 1⁄8-inch plywood side plates and pivot around a small bolt. Steve used two Hitec HS-85MG servos and 1/16-inch music wire pushrods to actuate the pivoting motor mounts. As you can see from the photos, his design is simple, straightforward and very easy to build. You can buy your own set of plans for Steve’s Su-37 Super Flanker (plan no. K0708A) at rcstore.com. 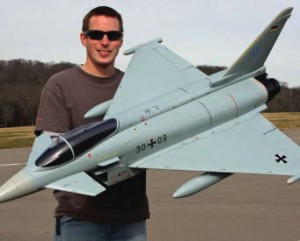 We recently spoke with our good friend and flying buddy Jason Cole of Hobby-Lobby to get the inside scoop on flying and setting up thrust vectoring jets. Here’s what he had to say.

Jason, it’s often said that good flight management begins with proper setup. When it comes to TV, what’s the  recommended degree of deflection for the exhaust nozzle? I like to set up the TV nozzles for maximum control
deflection on high rates. This gives the best push for radical maneuvering. Low rates will be right at half the deflection of full travel.

Should the mixes for each control axis be set on an active mixer or do you think a flight mode switch is better? Why?

It just comes down to personal preference. For initial test flights I like to turn on all of the TV mixes at one time with one
switch. It keeps things simple so you can concentrate more on flying the model rather than trying to remember to turn the different mixes on and off. Some models land easier without the TV units activated so it’s nice to hit one switch before making your landing approach.

With the foamie jets so popular today, what about the servo requirements for moving TV nozzles?

The design of the TV units I’ve used require very little pressure and holding power from the servo to deflect a TV nozzle fully. A regular 9-gram sub-micro servo does the job in most cases.

While flying, how should you progress? One control axis at a time, or go for it all?

I say go for it all. You should have low rates set up for takeoffs, landings and just cruising around. Get up a few mistakes high and then go to high rates. One of the first and easiest maneuvers to try is a tight flip. When flying along straight and level, go to full throttle and pull full up-elevator until the model flips and comes back to upright. Let off on elevator to exit. Another one is go high and use full throttle, full rudder, full up-elevator and a touch of aileron in the opposite direction as the rudder. This will create a nice tight flat spin. To exit, let off the aileron and elevator, and apply slight opposite rudder. Stay high and play with it until you feel comfortable. Most maneuvers require full throttle to get the maximum push from the TV units, so don’t forget to go back to low rates when setting up for a landing. Thrust vectoring is here to stay. TV completely alters the flight dynamics of an aircraft and allows previously  unimaginable maneuvers to be accomplished.