As my current workshop project continues, I thought it would be a good time to address proper installation and alignment of fuselage formers and stringers. Here are some tips that make it easier to keep everything straight and properly aligned. Just take your time.

Also, here’s a small but important correction from last time. With a little more research, I’ve discovered that the Nieuport 27 I wanted to build is actually a 24. It is the Nieuport 24 No. 4393 flown by MdL (NCO) André Loyseau Grandmaison of the Escadrille Squadron N 561, The Chimera painted on the side is what drew me to build this plane. Basically the difference between the type 24 and the 27 is the main gear axle and the tail skid arrangement. The 27 had a split axle similar to the Sopwith Camel and a internally sprung tail skid. The 24 has a solid axle like the Nieuport 17 and the fixed and faired tail skid as shown above.

Getting back to the workbench, we left off with the two side frames assembled and ready for the cross members to be added. The first thing I did was to brace the sides in a vertical position (on top of the top view of the plans), and using squares for alignment, I epoxied the firewall in place. 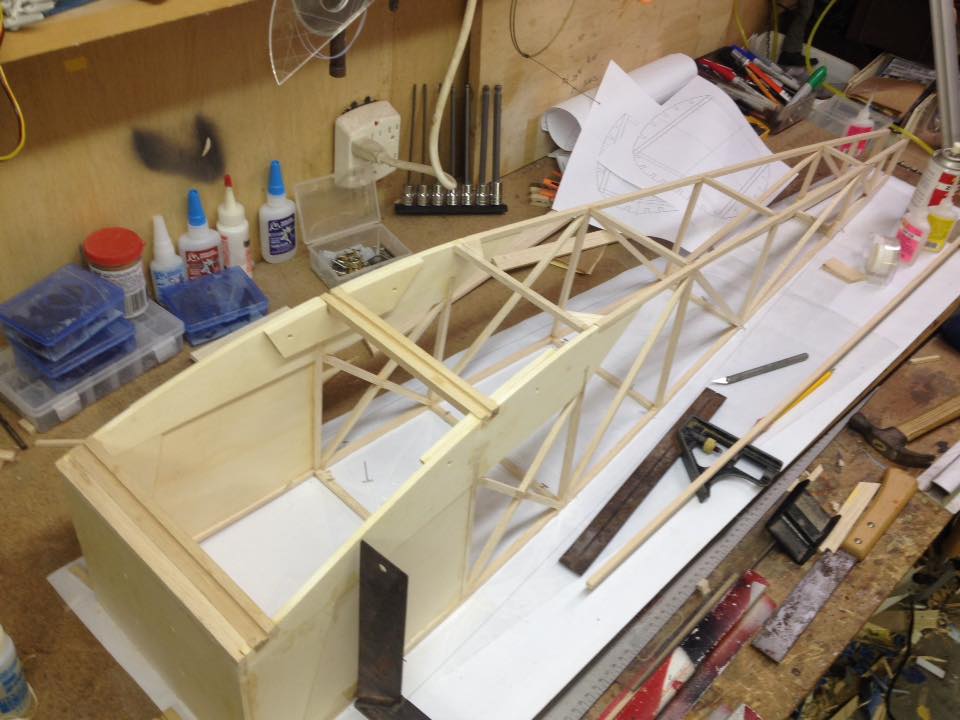 The top longerons were first pinned to the plans then the top and bottom cross-members were added from front to back, checking the framework for squareness. (The framework is inverted). The firewall then installed and once the epoxy cured, I added the hardwood landing gear channels again using epoxy. 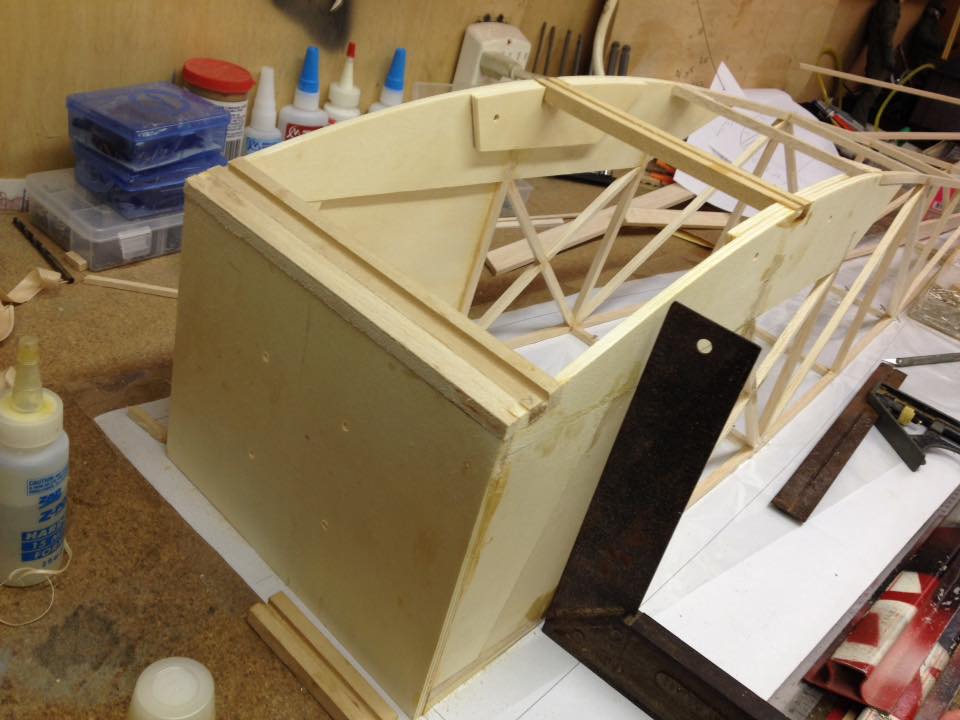 Here you see the balsa block added to the bottom of the firewall to fill the area forward of the front landing gear channel block.

After checking the framework for squareness again I then add all the bottom diagonals gluing them in place from front to back. 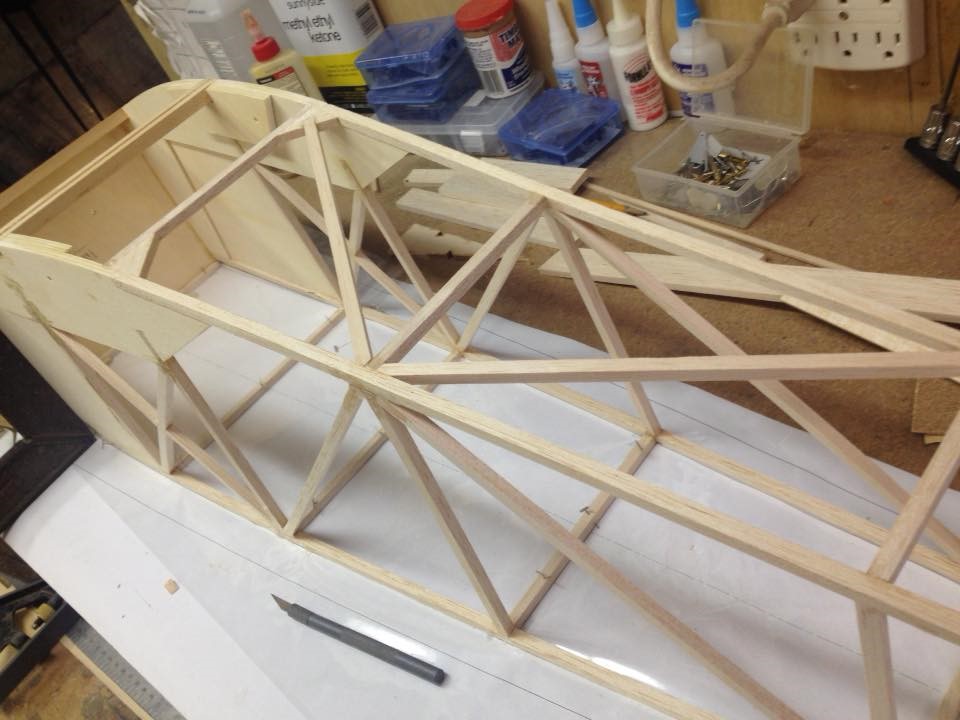 To start the former and stringer assembly, you begin at the front and work back toward the tail. There is a circular cowl ring made from 1/8 inch lite plywood and this is epoxied to the face of the firewall. But before gluing it into place, I glued the top and side formers to the backside of the former ring. This makes it easy to center the cowl ring as the epoxy cures. 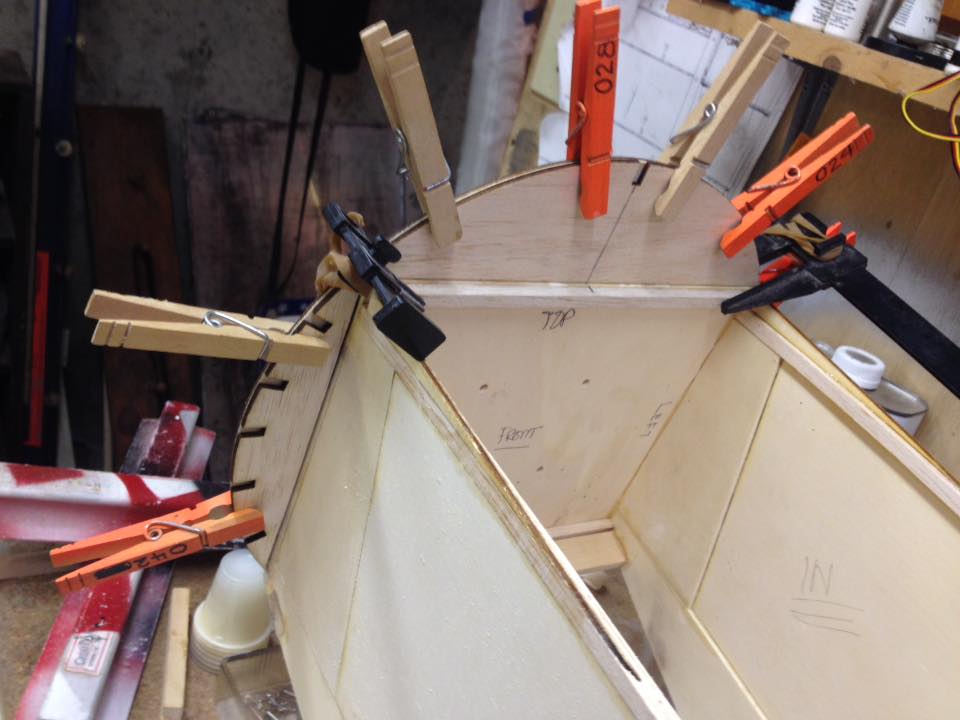 Here’s the front of the cowl ring in place I used 15 minute epoxy to glue it to the firewall. 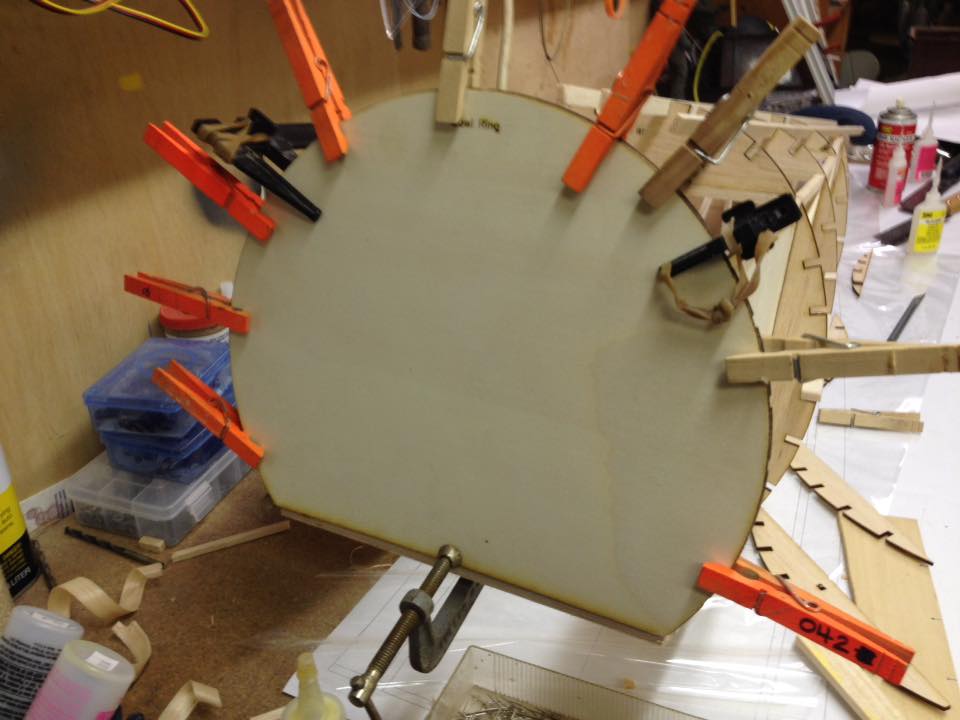 Using 1/8-inch balsa, I made all of the top and side formers with the stringer slots cut in place. Lots of time was spend on the CAD drawings to make sure everything would line up properly. 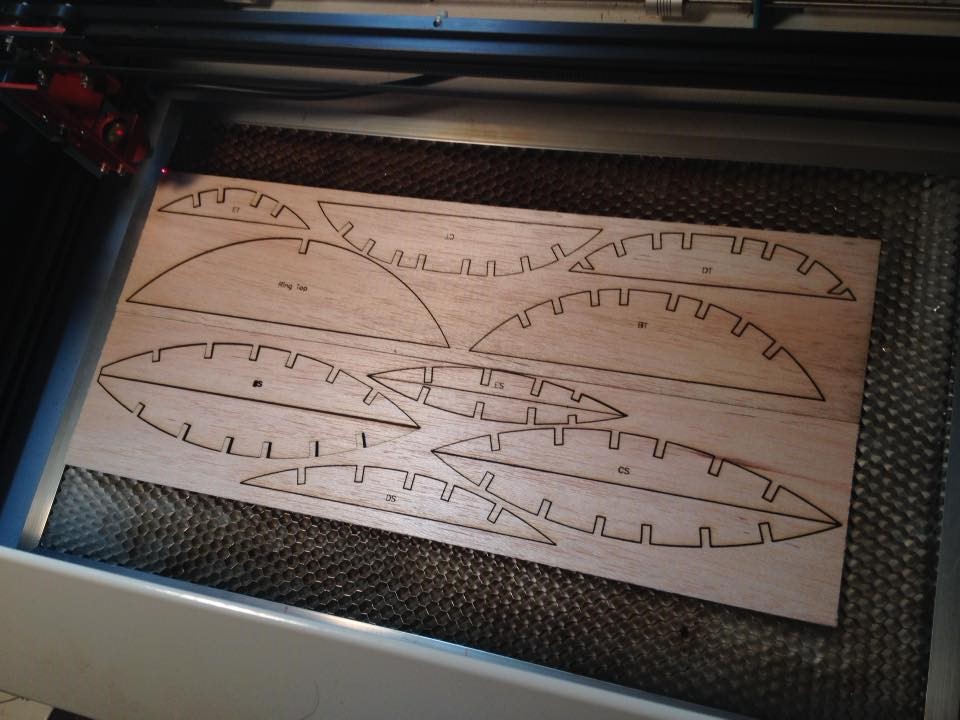 Start placing the top formers at their proper locations while using the stringers as a guide. Basically all the formers have to be centered (left to right), at their given locations. I tack glue the formers in place in case they might need to be tweaked a little during construction. The section between the firewall and the second former will be sheeted over with thin plywood so the stringers do not have to be glued in place here at this time. 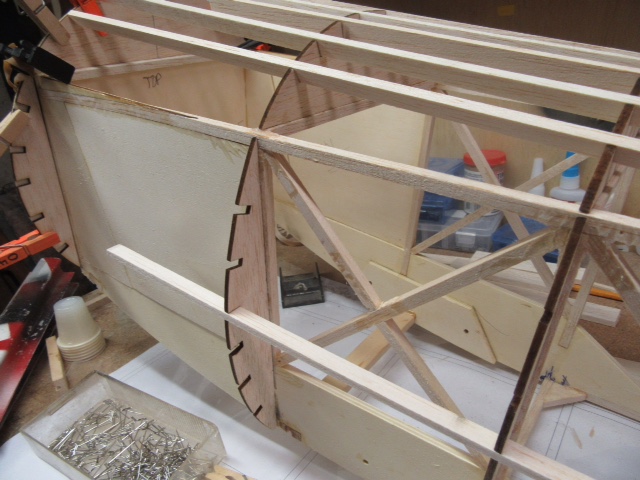 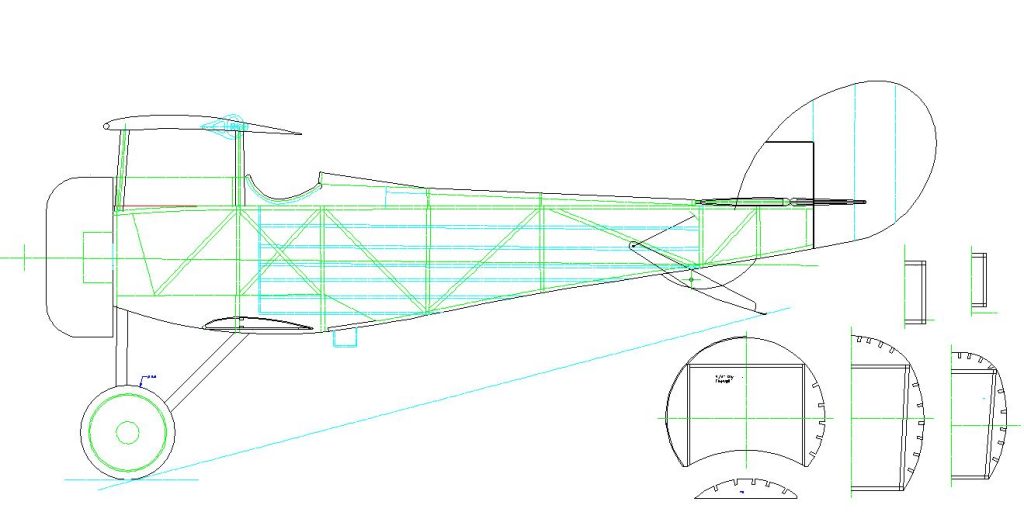 Here you see the aft formers and stringers in place. Again, I used the stringers to help properly position the formers. Use your side view plans drawings (above) as a guide. All the stringers have to be parallel to one another. Some of the side formers shown below have not yet been glued in place. 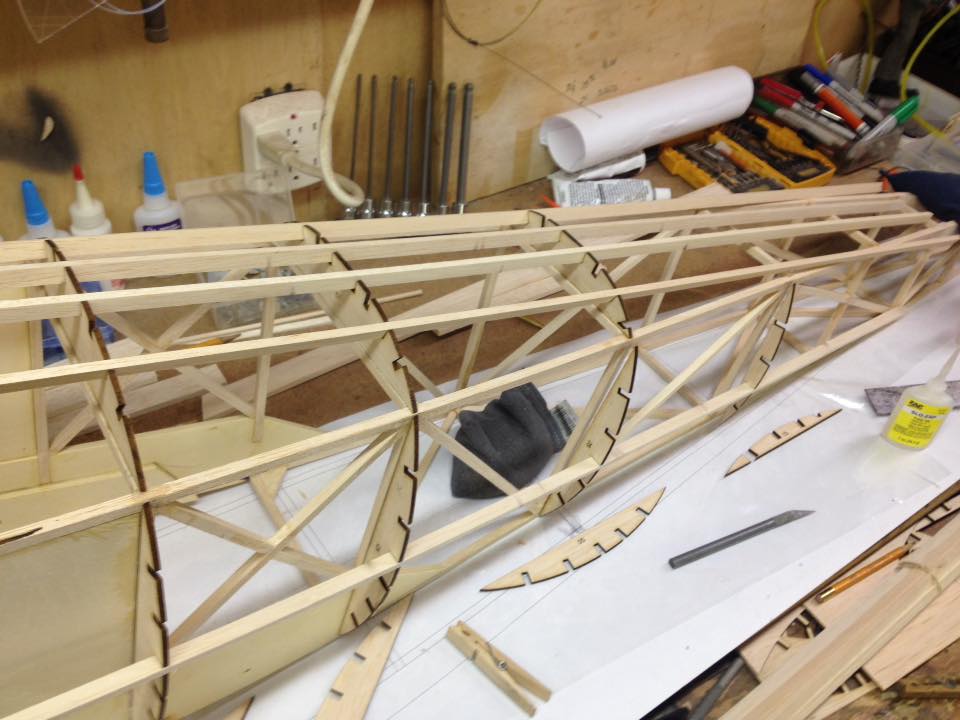 Keeping the stringers straight, continue adding the side formers in place. 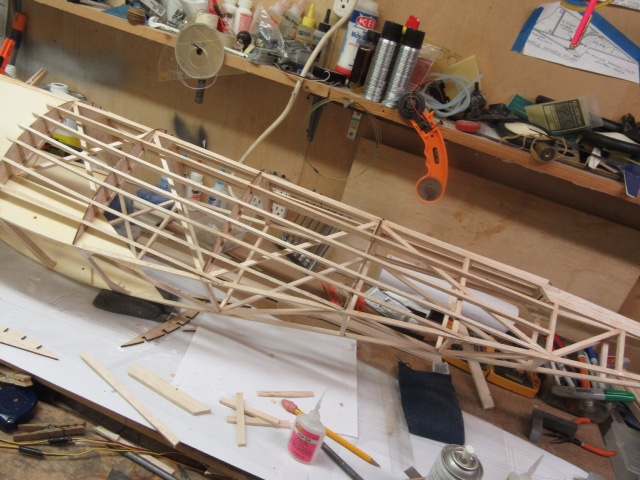 Stand back a little bit and take a look at the stringers. They should be parallel to one another and should mate with the slots in the formers without having to shift them up or down. They should slip easily into place. If not, you can adjust a trouble slot slightly by enlarging them so the stringer remains straight. Glue in place and then add a little scrap balsa to fill in the gap. 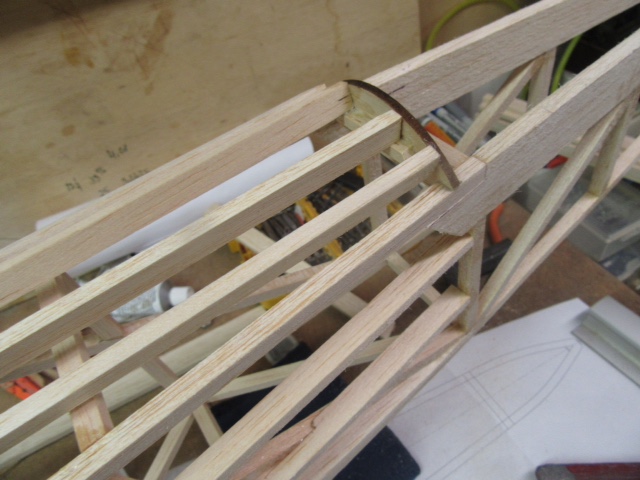 At the aft end of the top stringers, there is a  former at the front of the horizontal stabilizer saddle. The stringers should be sanded slightly so they butt up against the former to be glued into place. Some internal blocking is  added to support the ends of the stringers. Also the aft ends of the side stringers end up flush with the second to last framework vertical. 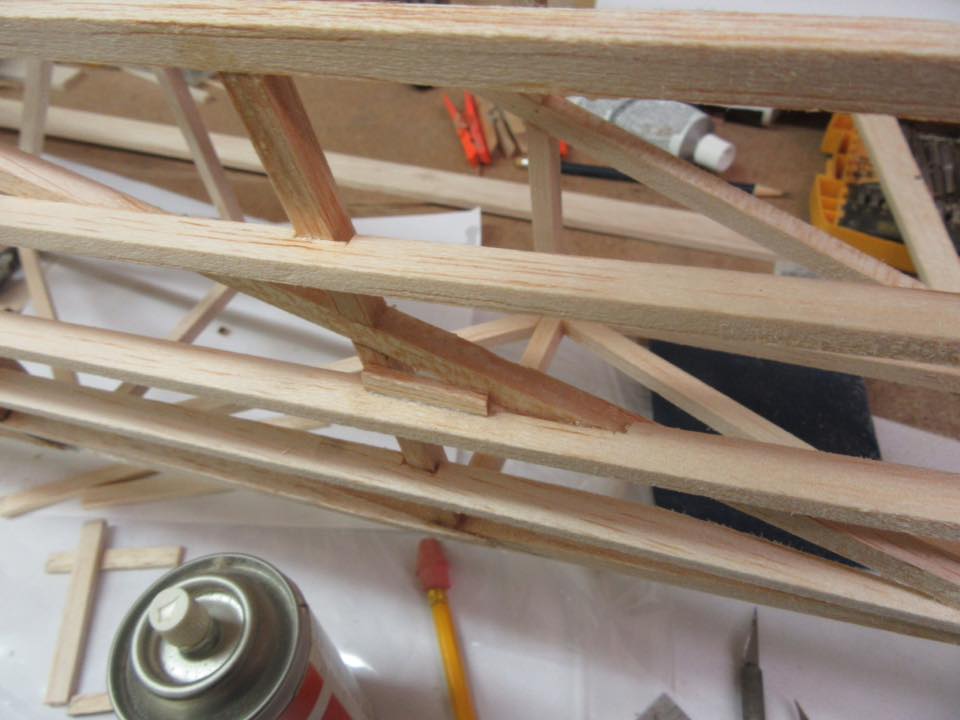 To keep the stringers running true, anywhere they interfere with a framework vertical or diagonal member, the stringer is notched. Once glued in place this adds plenty of strength to the entire fuselage assembly.

That’s it for now, so stay tuned as the Nieuport 24 project continues.