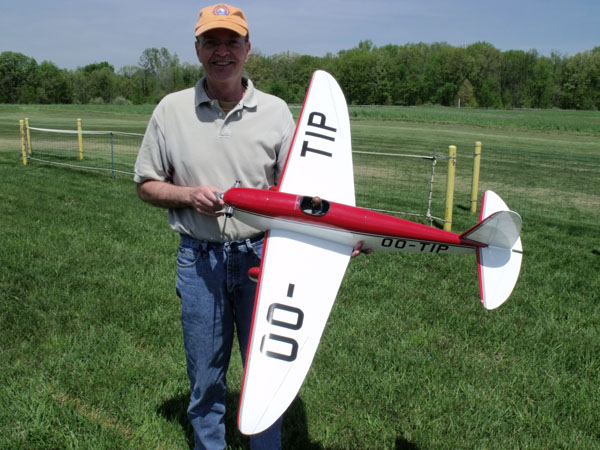 Designer Dennis Sumner has build several excellent flying model and his newest is the Tipsy S2, plans now available at the AirAgeStore website. Featured in the July 2015 issue of Electric Flight, the construction plans are at: https://www.airagestore.com/tipsy-s2.html 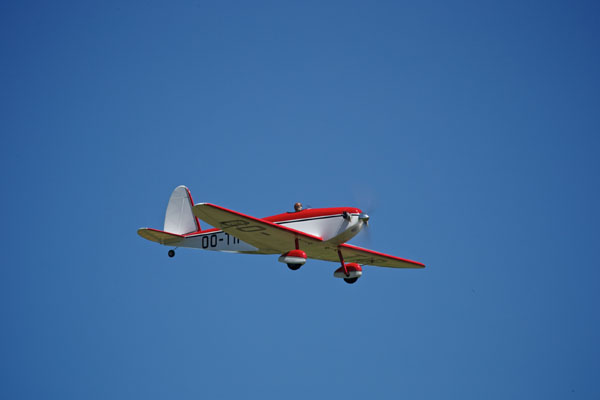 Scale and unique airplanes always appeal to me and when I first saw an article on the Tipsy S2 in (VAA) March 2009 Vintage Airplane,  (Sister Publication to EAA’s Sport Aviation), 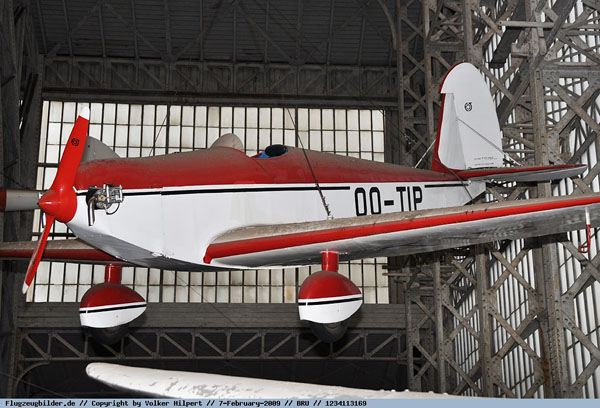 I knew I needed to model it.  I used the three view from the article to develop my 1/6th scale plans. The Tipsy line of airplanes was designed by Belgium designer Ernest Tips. The S2 was designed and built back in the mid 1930’s and powered with a variety of small 2 to 4 cylinder motors. After doing some research I found OO-TIP in a Belgium Airplane Museum and it was powered by a 2 cylinder 28 HP Douglas Sprite engine. I loved the “Spitfire” look with elliptical surfaces and also the red, white and black color scheme.  I have continued researching Ernest Tips and his airplanes and came across a great book of all his designs. Les Avions Tipsy Airplanes by Vincent Jacobs.  I ordered the book direct from the author in Belgium.

Getting Started: The construction is all balsa with a fully sheeted wing, the tail surfaces are built up and use laminated construction for the outlines of the fin, rudder, stab, and elevators. The airplane has a fairly short nose so try and keep the tail feathers built a lightly as possible. The engine and stabilizer are set to 0 degrees and the wing to +2.

Tail Group: Start by making templates for the rudder, fin, stab, and elevators to form the laminations. I used foam board. The laminations are (3) pieces of 3/16 x 1/6 balsa soaked in warm water for 20 minutes. Glue the laminations with Titebond glue and when they are dry place them over the plans and add the other 3/16 square balsa sticks and other 3/16 balsa pieces noted on the plans. Note grain direction on the S1 piece. Because of the unique design of the stabilizer and elevators you will need to use 2 separate elevator pushrods. 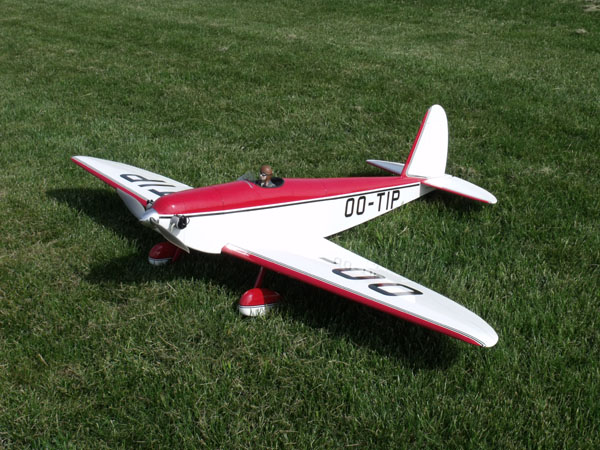 Fuselage: Build the fuselage box from F1 to the tail first, then add the firewall and nose balsa pieces. Start by cutting F1 and F2 from 1/8 plywood along with the 3/16 balsa wing saddle and the 1/8 balsa stabilizer doubler.  Build 2 fuselage sides over the plan with 3/16 balsa sticks. Glue F1 and F2 to one side of the fuselage then join the 2 sides upside down over the top view of the plans making sure everything is lined up with the fuselage centerline. Sand the inside tail post on both sides to give a 3/16 thick tail post before gluing together. Add 3/16 cross balsa sticks at the positions of F3, F4, and F5, again make use of the top view to get correct lengths for the cross pieces. This will be more important once the turtle deck formers are in place as the 1/16 turtle deck sheeting will be flush with the 3/16 square longerons.  Cut out your firewall from 3/16 plywood and the 2 pieces of ¼ balsa that will form the front of the fuselage. Shim your fuselage off your building board upside down with some scrap wood (I used ¾ plywood and ¼ balsa) this will allow you to glue the front side ¼ balsa pieces and align the firewall at 90 degrees.  Again build over the top view of the fuselage to get everything lined up. The cowl is held on with ¼ magnets keyed with 1/8 wood dowels. Add the ¼ balsa triangle to the top of your ¼ front balsa sides then add the top balsa block to form the top of the fuselage from the firewall back to F1A. Glue F2a, F3, F4 and F5 to the top of the fuselage making sure to keep them 90 degrees to the top of the fuselage. Add the ¼ square balsa stringer and sheet the turtle deck with 1/16 balsa.  Next cut your hatch parts out with floor from 1/16 balsa along with H1, H2, H3 and H4. Assemble in place on the fuselage to get good alignment. The hatch is held in place with (8) ¼ magnets. Add 3/16 balsa gussets on the inside corners of the fuse along with the inside floor of the hatch. I pinned my hatch to a piece of flat ¼ balsa and planked the hatch with 3/32 balsa.  Mount your motor and build the removable cowl. The cowl is held on with (4) ¼ magnets and 1/8 dowels. Using the plans cut balsa blocks for the sides, top, and bottom. Mount your 1 ½ spinner, snap the hatch in place and shape the front cowl and fuselage. Cut out the cockpit area. The engine cylinders are cut from 1/16 balsa assembled on 1/8 dowels. You will need 20 of the smaller discs and 12 of the larger discs. I did some simple shaping with the cylinders chucked into my cordless drill and some sanding blocks. Add rocker covers and pushrod details and glue in place after the fuselage is covered. Leave the forward 3/32 balsa sheeting off until the wing is mounted, this allows access to drill the hole in the wing for the dowel. 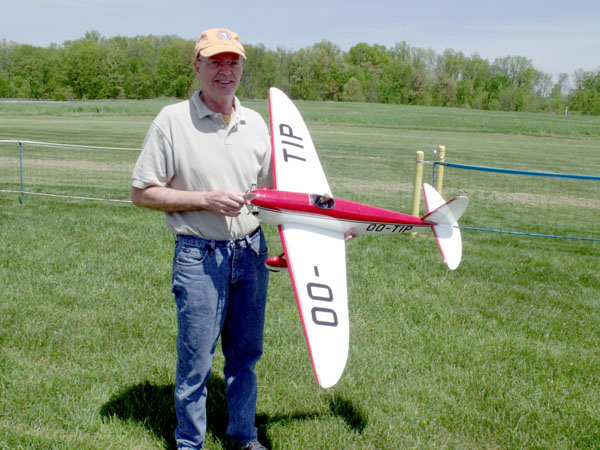 Wing: The wing is fully sheeted in 1/16 balsa, make up your 4 skins and cut out all the ribs. Also cut R2a and R3a from 1/8 plywood, these will strengthen the ribs where the hardwood landing gear blocks mount. Pin the bottom 3/16 square spar to the bottom sheeting then locate the ribs and the back 1/8 square spar. Use the R1 tool on the plans to set R1 to 88 degrees to provide total dihedral of 4 degrees.  I used a piece of tapered 1/8 balsa to build in washout in the outboard section of the wing (R7, R8, and R9) Locate the 1/8 lite plywood aileron mount between R6 and R7, trace around the mount then center the 1/16 aileron plate and cut the skin our before gluing the 1/8 mounting plate. Framing the ailerons is the only tricky part of the wing. Start by marking the location of the (2) ¼ pieces on the sheeting. They will frame the ailerons. Don’t glue these 2 pieces together as this will be the aileron hinge line. With the lines marked on the sheeting you can cut a ½ section out of the ribs for the ¼ pieces. Once the ribs are glued to the bottom skin sand the ¼ balsa pieces to match ribs R6, R7, R8, and R9. Use pins to mark the hinge line through the bottom skin and inside edge of the ailerons. This will make cutting the ailerons out of the wing after sheeting easier. Also use pins to make witness marks for the hardwood landing gear blocks. Glue the top 3/16 spar and 1/8 square spars and add shear webs to the 3/16 spars. Add pull strings for the aileron servos before gluing the top skins in place.  When dry sand the skins flush to the leading edge of the ribs, glue the ½ x ½ balsa leading edge in place.  Shape the leading edges and give the panels a good sanding then cut the ailerons free. Add the balsa tips and hinge the ailerons. Glue the panels together and glass with three pieces of ¾oz. glass 1”, 2” and 3” wide. 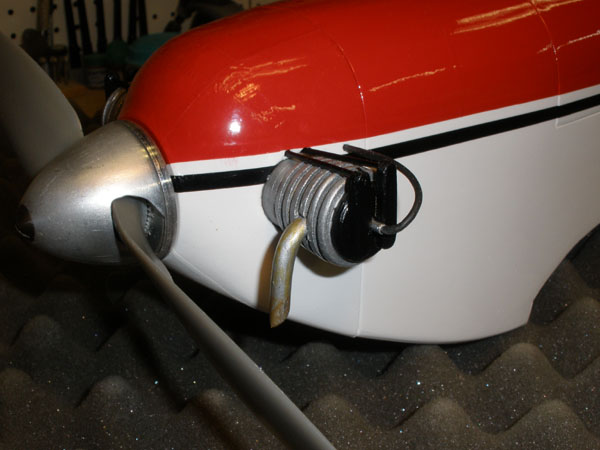 Final assembly and finishing: Before bolting on the wing make sure the stabilizer and motor are zero degrees and the wing is plus 2 degrees. Drill the hole in the wing for the dowel then add the 3/32 bottom front fuselage sheeting. Glue the stabilizer and fin in place, add steerable tail wheel or skid. Add balsa stab fillets once the stabilizer and fin are glued in place. Cut the wheel pants parts out and assemble on 1/8 music wire, then sand and shape. The rudder and elevator servos are mounted in front of F2. Fabricate and glue in a battery tray. I used white Ultracote and True Red Monokote for my prototype. Glue the cylinders in place and add a pilot and windscreen. There are templates on the plans for the 1/8 music wire landing gear and the windscreen. My 00-TIP graphics were from Callie’s Graphics 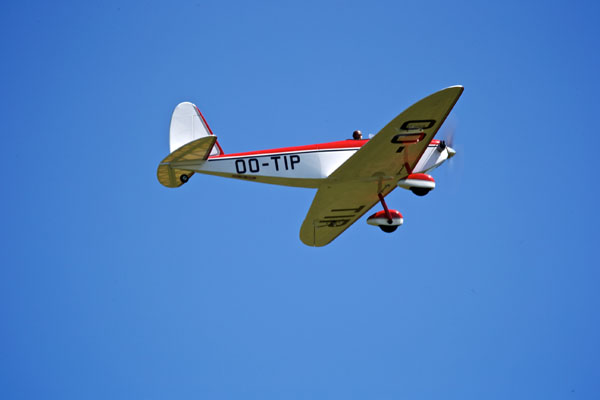 In the air:  Make sure you balance at 2 ¾” to 3” from the leading edge at the fuselage. With the Scorpion 3008-32, 3S2600 Lipoly, and an APC 10x5E prop I am getting 100 watts of input power. With the light wing loading it flies very well. It requires a touch of right rudder on the takeoff roll. Early on I was concerned about tip stalling due to the elliptical wing tips but with the built in washout and 35% Aileron differential it really doesn’t have any bad habits. Try some stalls at altitude to get a feel for it then bring it in for your landing. It does some nice aerobatics with loops, rolls, Cubin-8’s. I think you will be pleased with its looks and performance.