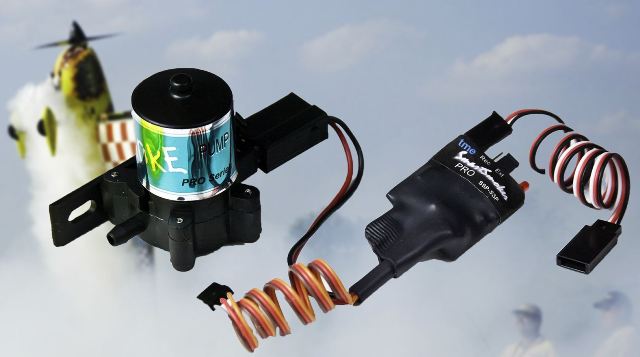 Spring is almost here, and the season of aerobatic competitions and shows is almost here! Make sure you’re ready to put on a show with this new smoke system from TME! Here’s their press release:

(model SSP-SSP ). For years TME has been the leader in easy to install Smoke Systems used by top TOC and Masters pilots

whose names read like a “who’s who” of RC aerobatic champions. TME actually created the first

Smoke” system on the market. They have kept ahead of their imitators by making the best and most

popular smoke system even better over the years.

The new SmartSmoker PRO ™ kit is based on its predecessor line of Simple Smoke Pumps. This is a

complex plumbing, mechanical valves or servos. For the new SmartSmoker PRO ™, TME has kept the

transmitter adjustable rates and Smart Prime ™ features just like the original SmartSmoker, but now users can

select the power source of the oil pump circuitry. It also has a new status LED to indicate SmartPrime ™ and

max flow for easy setup. As always 4 ft of clear tubing, a length of black heat resistant tubing, a T valve and a

special high volume check valve are included with the pump.

pack, like previous versions, or choose to draw power from the receiver connector when used in GIANT

SCALE airplanes with power distribution systems. This makes it specially suited for systems that already have

TME’s part number for the Xtrema SmartSmoker PRO ™ Simple Smoke Pump is model SSP-SSP. It will

retail for $129.99 and be available in fine Hobby Shops nationwide. They may also be ordered directly on