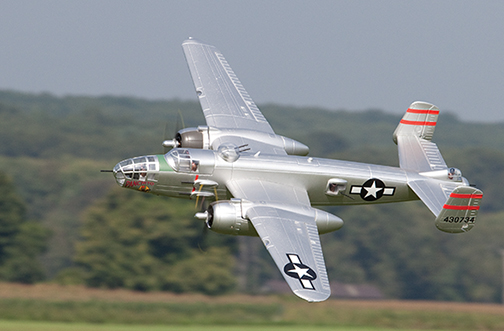 There’s something special about RC warbirds, because they remind us of a time in history when pilots risked everything to protect their homelands. We also love them because they look great on the flightline, in the air and are a blast to fly! Here at Model Airplane News we are fortunate to be able to test-fly most of the warbirds that hit store shelves, the ones we’ve compiled here represent the best of their categories. We considered looks, size, performance, quality of construction and parts and overall value to come up with this “top 10” list. If you’re a fan of scale fighters and bombers but weren’t sure which one was right for you, we guarantee that you’ll find one here that’s perfect for your hangar!

Any warbird lover has probably considered an AT-6 Texan as an RC project. When we reviewed the HobbyKing version of this classic Advanced Trainer, we knew it was a winner. First, it comes with retracts installed, flaps, lights and even an included electronic engine sound system with speaker. It also comes with a big hatch cover/canopy section that gives excellent access to the battery pack and electronics. The Texan also has plug in outer wing panels, but we thought the model was compact enough not to require removing the panels for transport. As far as performance we were surprised by how much thrust the scale two-blade propeller produced. Even operating from our grass runway, the Texan effortlessly took off with power to spare. Stability and response gave us the feeling of a larger plane while landings were undemanding with or without the flaps deployed. If you can fly a tail-dragger, you’ll love the Texan.

“FULLY FITTED OUT WITH RETRACTS, FLAPS, LIGHTS, AND OTHER DETAILS, THIS TEXAN HAS LOTS OF SCALE APPEAL.”

Of all the WW II warbirds we’ve reviewed, the Mitchell B-25 is one of our all-time favorites. Made famous in the Doolittle raid on Toyko, this twin-engine medium bomber makes a great first twin-powered model. During the test flights we felt it had more than enough power for grass runways as it took only about 20 feet to liftoff. In the air we found it to be very stable and predictable thanks to its pilot-friendly wing-loading numbers. When it came to assembly, it took less time than we thought as most of the equipment comes factory-installed. Most of the work was attaching the various servo leads and Y-harnesses. Equipped with electric retractable landing gear (with sequencing gear doors,) and two three-blade counter-rotating propellers, scale crew figures and working navigation lights, we loved the way the Mitchell looks in the air cruising along at about half power. We recommend this “Raider” for any intermediate pilot.

“WITH TWIN COUNTER-ROTATING SCALE PROPS AND WORKING GEAR DOORS, THE B-25 BOMBER IS REAL EYE-CANDY!”

If you like the airplanes that flew during the Battle of Britain, then you have to love the Bf 109. Sleek, compact and piloted by very experienced Luftwaffe pilots, these fighters were very serious combatants. We were very impressed when we first saw the 109 and could not wait to test fly our own sample. Once we assembled the model and cranked up the Power 60 brushless motor, we knew this was going to be a sweet ride. With its 64-inch span, the model fits the very successful 60/60 category so popular back in the early days. But with a lighter wing loading than the older .60-size glow planes, the Bf 109F-2 is well behaved and benefits from the functional flaps. After our test flights we thought the chosen power system is just about perfect for this Axis fighting machine. If you want to fly a real WW II warbird, we recommend this baby for any intermediate pilot with some tail-dragger experience.

“WITH ITS GEAR TUCKED UP INTO THE WING, THIS FIGHTER IS A SLEEK, SMOOTH PERFORMER”

The Messerschmitt Bf.110 Zerstörer (Destroyer) was the pre-eminent night fighter aircraft for the Luftwaffe during WW II. The Durafly version of the Bf.110 is made of molded foam and comes as a “Plug and Fly” version that only requires the addition of your receiver and motor battery. The 110 is incredibly detailed, so in only a few hours, you can have a scale twin-engine warbird that’s ready to fly. Total assembly takes about three or four hours, we found it to be extremely pilot-friendly. In fact this plane will performed anything we wanted it to do in a scale fashion and then some! Its aerobatic capabilities are very good and will fly inverted almost as nicely as it does upright. Loops are rolls are well within its repertoire.

When you see a full-size Corsair, aren’t you amazed by just how big the plane is? Of course, it has to be large to get that massive engine and prop on the front of it! The Hangar 9 F4U-1D Corsair 60cc is also large and has balsa and plywood construction with a fiberglass wing center section. This plane is designed for the scale enthusiast who has some model building experience and is at least a proficient, intermediate pilot. Overall, we have to say that this F4U-1D Corsair is one of the easiest scale warbirds we have ever flown. There is nothing hard about flying it, and it is like flying a tail-dragger sport plane. It is a great-looking plane that’s easy to assemble, easy to scale out, and fun to fly — what else could you need?

Nicknamed the “Butcher Bird” by Allied pilots during WW II, the Fw 190A was a down-and-dirty dogfighter designed to be rugged and hard-hitting. When Global first came out with this .46 size version we were very excited and wanted to get out hands on it for flight tests. Now available in a blue/green/gray paint scheme, we really like that the retracts are optional for the budget-minded pilot. We opted to install Global mechanical retracts with spring-loaded struts and the fighter taxied perfectly. You do need to have some tail-dragger time, especially if you fly off of a smooth paved surface. We also went with the 40-size brushless system from Global and were very pleased with the 4S 3600mAh LiPo pack and APC 12×8 propeller combination. During flight tests, we found that the model has solid performance all around and it is easy to do three-point landings. It’s a great warbird for intermediate pilots.

“AS SOON AS IT LIFTED OFF AND WE HIT THE RETRACT SWITCH, WE KNEW THIS BUTCHER BIRD WAS A WINNER!”

An electric twin of a British WW II aircraft that you don’t see every day at the flying field? Sign us up! The Mosquito is small enough to toss in your backseat for everyday flying, and it has enough power for all the classic warbird maneuvers. We liked the optional E-flite retracts (a bolt-in fit) and optional flaps as well as the fact that the plane comes out of the box fully detailed, with plastic cowls, canopy and hatch and detailed cockpit. With the motors and servos already installed, this is truly a one-evening assembly project. We found that the Mosquito slows down nicely on landing approach, and it’s even slower if you add the flaps. We recommend it for intermediate pilots and think it’s even a great first twin.

“THIS TWIN IS SO MUCH FUN TO FLY YOU’lL WANT TO BUY A FEW BATTERY PACKS!”

With twin tail booms and twin counter-rotating engines, the P-38 Lightning was one of the most advanced single-seat fighter designs of WW II. This small P-38 Lightning looks and performs great, and it comes fully assembled and finished. Twin, counter-rotating, three-blade props give the model spirited performance while also neutralizing the effects of motor and propeller torque. Because of its compact size, transportation to and from the club field, local park or sports complex is a breeze. A fighter should be able to loop and roll, and this one had no problems with those classic maneuvers. There’s plenty of power with a fully charged pack to loop from level flight, and roll response is very good since the ailerons are big and have good throws.

“THIS MICRO TWIN FIGHTER WILL MAKE YOU LOOK LIKE AN ACE!”

“THIS SAUCY VINTAGE WARBIRD CAN HOLD HER OWN WITH THE BIG BOYS!”

Did you know that, proportionally, more damaged P-47 fighters flew their pilots safely home than any other U.S. WW II fighter? That’s just one of the reasons we love Thunderbolts, and this EPO foam version from FMS lives up to its namesake in more ways than one: it’s durable, has plenty of power, and loads of fun to fly. Assembly, if you can call it that, is accomplished with a screwdriver and some glue for the plastic detailed parts. We found that this electric model has stable flight characteristics, even in breezy conditions, and it also has a good glide rate. And with details like factory-installed electronic retracts, flaps, a scale 4-blade prop, machine guns and even an external fuel tank, it’s no wonder we highly recommend it to any intermediate pilot who wants a lightweight, “heavy-metal” fighter.

If you ever wanted to get into giant-scale WW II warbirds powered with big gas engines, you’d be hard-pressed to find something easier to build and fly than this one. We have always thought the Gold Edition warbirds were just about a perfect starting point for getting into the real heavy-metal warbird scene, and the Spitfire did not disappoint. As soon as we pushed open the throttle and the Spitfire lifted off of the runway, we were sold on this Battle of Britain super-star. It feels like a big pattern ship and it grooves smoothly throughout all the basic maneuvers. When it was time to land, we dropped the gear, throttle back a bit and lowered the flaps for a near perfect landing. Give yourself a little more room on final as it might surprise you with how long it takes for the model to settle in for touchdown. This is a great fighter for experienced pilots.

“WITH ITS CLASSIC LINES AND ELLIPTICAL WING LAYOUT, THE SPITFIRE JUST SCREAMS DOGFIGHT!”