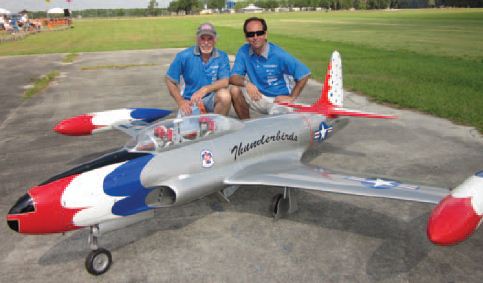 At an event as long-standing and prestigious as Top Gun, you would expect to see a field of excellently executed model aircraft, with many of them falling into the “outstanding” category. These entries go far beyond the definition of “models,” more accurately, they are scale replicas. At this year’s Top Gun, one interesting thing to note is that the static score of both the first and second place finishers in the Team category was an incredible 99.423, just over a half point from a perfect 100! If that isn’t clear evidence that fractions of points count, I don’t know what is! 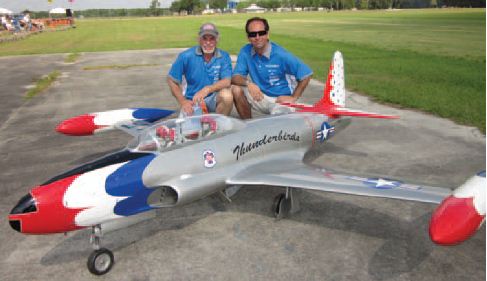 Coming out on top of the Team category, fighting for every point, was the team of Canadian Graham Mears and Brit Ali Machinchy. Their entry, a big, big T-33 “T-Bird started life as an imported Scale-Jets kit and is one of two currently flying. No stranger to scale circles, Graham is one of those rare types that is comfortable with, and expert at, virtually any type of replica making material. From the tube and fabric of his Super Cub to the “tin” of his F-16s, he produces an outstanding and convincing model. His T-33 was absolutely beautiful and got better everywhere you looked, including those often ignored “insides” like wheel wells and equipment access doors. For those of you who think that pre-molded composite airplanes have a leg up in competition or are easier to finish, especially those with all that sexy surface detail molded in, remember, that can be a double edged sword. If the prototype from which the molds are produced have errors, every one that comes out of those molds will have the same errors which the builder makes a decision to let ride or fix. Even minor issues like an incorrectly located panel line which doesn’t match the documentation requires the elimination of the original and the creation of the correction. Graham’s effort on his entry surely impressed the judges. O.K., the model was impressive enough to be almost perfect in static score. Now what? Now, friends, you hook up with Ali Machinchy, who seems to be able to expertly fly anything, form a team and sit back while he racks up a phenomenal string of superb flight to land you in first place in your class. Near perfect airplane, near perfect flying and international synergism—very tough to beat! 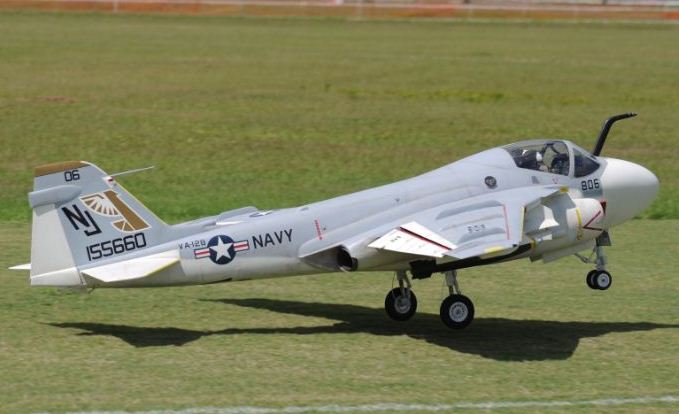 Among Vietnam war era U.S. aircraft, there are a few airplanes that stand out in the minds of nearly everyone, even those with a limited knowledge of that period of military aircraft. The Grumman A-6 Intruder may not be one of them. Less fabled and lauded over than the Thud, Rhino, SLUF and the Scooter, the Intruder nevertheless formed the backbone of the Navy interdiction/attack mission in both “A” (attack) and the “EA” Prowler electronic versions and was a key player during that time. A book and a movie were done (“Flight of the Intruder”) which introduced the type to a lot more people than would have otherwise known about it. From a proportion and planform standpoint, the A-6 makes a near perfect R/C model. With the appearance of reliable, good performing turbines, it was sure to be modeled. Mike Selby, another veteran of the Top Gun Team category with his Tigercat, Vindicator, Buffalo, A-10, F-111 behind him, jumped into the Intruder project with both feet. He fabricated the molds and built nearly everything else on the model and this 1/5-scale (10 foot), 55 pound beauty is the result. Powered by a single B300F turbine, the Intruder shows a level of realistic skin representation that you would be hard pressed to tell from the real thing. Big models mean big cockpits, which in turn, mean a lot of space to be occupied and filled, and Mike did, masterfully. From seats to consoles to instrument panels, it was all there! Being so close to the project, Mike again enlisted the flying skills of Ray Johns who drove the big machine around in a very convincing manner. Although Ray told me he hasn’t yet had a lot of practice time with the A-6, his performance was polished enough to end them in 2nd spot in the Team Category.