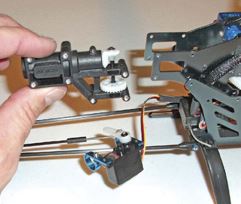 For several years, Align’s T-Rex 450 series has dominated the small helicopter market. Rather than resting on a proven design with excellent quality and fit, Align has gradually upgraded the heli to keep up with (or ahead of) their competitors, imitators, and outright copiers. With the release of the T-Rex 450 Pro, Align raised the bar higher than ever before. Rather than the incremental upgrade that had characterized the gradual evolution from the 450X up through the 450-V2, the Pro introduced a brand-new frame layout, a redesigned head, and notably, a torque tube-driven tail rotor in place of the typical belt-driven tail.

Belt-drive tails have become the de facto industry standard for a number of reasons. Belts are inexpensive, simple, and resistant to crash damage. But they also require regular adjustment, and the belts wear out more frequently than serious flyers like. The torque tube tail offers several advantages, the most notable ones being more efficient power transfer and little, if any, scheduled maintenance. That’s great news for proud T-Rex 450 Pro owners, but what about owners of older 450 models? In keeping with their reputation for faithful support of their user community, Align has released a torque tube retro-fit kit at an attractive price. With three different T-Rex variants in my collection, I wasted no time buying an upgrade to try out.

The upgrade kit is just as complete as you’d expect, and assembly could hardly be simpler. Installation is a simple matter of removing the screws that secure the tail boom assembly in the main frame, moving the tail servo from the old tail boom to the new, and installing the new boom mount/drive gear combo. There is essentially no adjustment needed, and the entire job can be accomplished in under half an hour.

How does it work? Flawlessly! Since I was installing the conversion in an existing heli, I already had the gyro programmed to suit my tastes, and I didn’t even have to adjust the settings. From the first test flight on, the torque-drive tail has been silky smooth, and it does indeed have lower friction than the original belt-drive version. With a street price of about $80, this is an affordable, quick and easy upgrade to your beloved T-Rex.