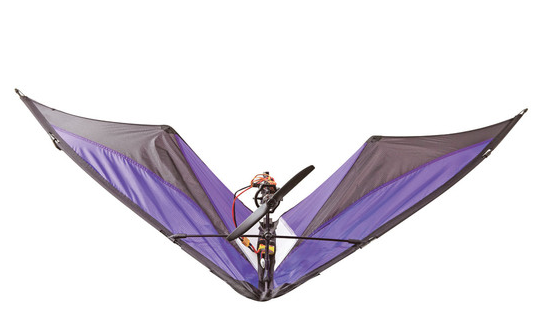 AIR SUPERIORITY MAY BE critical to military dominance—but it makes for wholesome summertime fun, too. Once you’ve flown a remote control helicopter, kite or, yes, quadrotor drone, terrestrial amusements just don’t have the same appeal—especially with all that uncharted airspace in your backyard, living room or office break room.

Before you take to the friendly skies, bear in mind that many remote control aircraft require practice to fly. Thankfully, there are technological advances that make piloting easier for the uninitiated. All of the helicopters in this roundup, for example, have a built-in gyro and electronics that help keep the copter level. (Steer clear of models without this feature; you will curse them.) The personal drone you see here uses a magnetometer, accelerometer and gyro, as well as ultrasound sensors that keep the toy stable up to 20 feet in the air. All make flying as simple as playing a videogame.

We’re assuming you don’t want to devote weekends to perfecting your RC piloting skills, so we selected a handful of especially easy-to-fly aircraft. And because you will inevitably crash, we stuck with models that are durable enough to withstand the abuse of an eager beginner. So don’t be afraid to aim high. That’s where the fun is. 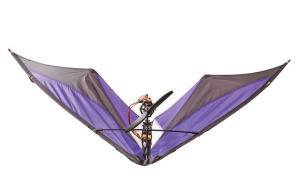 This powered kite may not exude the military chic of some of the other aircraft shown here, but the grace and ease with which it soars makes it perfect for beginners and the easily frustrated. Made primarily of ripstop nylon and fiberglass rods, it’s also surprisingly resilient. When you ram it into something, it bounces right off instead of crashing. This kite gets its agility from a single front propeller (similar to that of a Cessna) that rotates on a set of gimbals, no wind required. And despite its 5-foot wingspan, the kite packs up into a slim bag that you can sling over your shoulder.
$200, hammacher.com 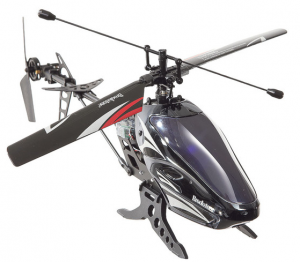 Flying a toy helicopter outdoors takes skill; wind and turbulence can be treacherous. But with this copter, if you have access to a wide open space—the manufacturer of the Cloud DSS recommends at least a 200-foot radius—you’ll be able to explore the skies with just a bit of practice. Instead of the two propellers used by many indoor fliers, this model only has one, but it maintains stability with a weighted flybar and a gyro. The range of the Cloud DSS is a formidable 200 yards, higher than the Washington Monument. Bring binoculars.
$150, brookstone.com 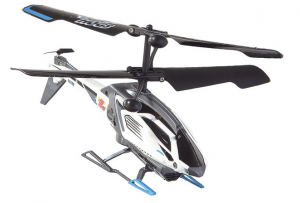 This palm-size helicopter is perfect for first-time pilots. Not only is it a snap to get the hang of, but its small stature will keep indoor destruction to a minimum. If you’re more comfortable flying videogame copters on your smartphone, you can swap out the included remote control for an iOS or Android device. Just plug the Heli Replay’s infrared transmitter into your phone or tablet’s headphone jack, and you can pilot the toy by tilting. It’s just as addictive as “Angry Birds” but way more fun. $45, airhogs.com 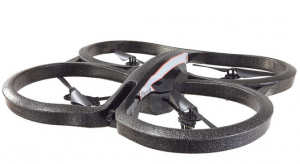 This quadrotor drone will make you feel as if you’ve somehow stumbled upon top-secret military gear. Pressing a button in the controller app for iOS or Android makes the drone whir to life, levitate a few feet off the ground, then hover there awaiting your command. Of all the aircraft in this roundup, the AR.Drone 2.0 is the most intuitive to steer by a long shot, and it has the coolest feature: an onboard high-def camera that beams video back to your smartphone. The footage can be recorded so you can add some Hollywood-style aerial shots to your home videos.
$300, ardrone2.parrot.com 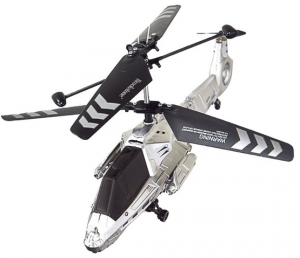 Co-workers and baby sitters, beware. The Combat RC Copter is bigger than a micro helicopter, yet small enough to fly safely indoors. It’s also slightly menacing as it rounds a corner. We recommend this chopper primarily for the ease with which it maneuvers, but it also has a combat feature: Get two of these in the air, and they can fire infrared beams at each other, complete with ’80s-style sound effects. After getting shot three times, the defeated copter will spin dejectedly to the ground. Fortunately, you can be airborne within seconds for round two.
$70, brookstone.com