The P-40 is one of the most recognizable warbirds on the planet. Until now, it has been flown by many Top Gun, Scalemaster and warbird fly-in modelers. One of the best-known designs is the reliable one produced by Nick Ziroli.

Now that the 3D aerobatic world has finally gotten its fill of Extra 300, Yaks and the look-alike designs, enter Gene Payson of Troy Built Models. Gene has revolutionized both worlds by introducing a 3D warbird! Yes, it will do the harrier maneuver by using a DA-85 for that extra edge of power for tough maneuvers, but it still retains that warbird look and feel.

Certain liberties were taken to make sure the engine would fit inside the cowl so you wouldn’t have to carve half of that beautiful cowl away just to get the engine mounted. For better tracking, the gear was spread out one more rib width. To make the plane more aerobatic, the tail was lengthened and tail surfaces increased by just a few square inches. Don’t go and buy this plane and expect to fly it in a scale contest; you’ll not score high in static points.

After all, Gene has been designing and building airplanes for over 20 years and he knows what he’s doing. A whole new line of popular warbirds are soon to come and will delight any modeler who wants a great-looking warbird that really out performs anything you have ever flown. Future designs include a 3D Hellcat, Corsair and many more popular classic warbirds. Stay tuned!

The retracts are specifically designed for each model and come in the kit; the retractable tail wheel is also included. The P-40 was also designed to use a DA 85 that fits perfectly inside the cowl with no spark plug hanging out. A specially designed muffler with exhaust comes out at the rear of the cowl, as it should. There’s no need to cut up the Yellow Tiger Head Markings on this warbird and boy, does that make it easy to take the cowl on and off. Speaking of the cowl, the mounting is done with six mount screws on the inside of the cowl with a wooden ring. I made a special tool to reach the Allen head 6-32 screws at the back of the cowl. All I did was cut a Du-Bro ball drive in half and extend it using epoxy in the two pieces in a tight-fitting piece of 12-inch brass tubing! For those of you who like to start your engine by hand and then count your fingers before you pick up your transmitter, you can use a metal spinner or you can choose to use a carbon-fiber one that is available from Troy Built Models.

The fiberglass fuselage with panel lines and rivets has a glass-covered, balsa-built wing that is color matched with flat olive drab. No non-scale shine to this classic!

The wing is mounted from the inside of the fuselage with 1/4-20 bolts so no nasty-looking bolt heads are seen as your warbird passes overhead in a slow fly-by. You can remove the cockpit using the built-in, spring-loaded hatch and access to the mounting bolts and the radio gear will now be in plain view.

For ease of transportation, after removing the two wing panels, the three-piece wing design allows the plane to be carried sitting on its landing gear. Split flaps are also featured on the model and are very effective for landings.

But the best is yet to come! The wing panels are slid on the wing spars and then held in place with a .045 wire mounted onto one of the threaded guns that goes into the wing from the front to hide the wing attachment. How cool is that?

The stab is mounted on a carbon-fiber tube that is easy to remove for further ease of transportation. Nothing has been left out from the aerobatic roots in this design!

If you’ve been waiting for a highly aerobatic warbird that you can really put through its paces, this new era of warbird design is finally captured in TBM’s P-40. Assembly requires a minimum of effort on your part and it’s also easy to assemble when you get to the field. Everything in the plane stays hooked up! Just plug in the servo cables for the aileron and flaps, install four servo plug locks, insert the wing pin/machine gun and tighten. I would recommend the DA 85 for those of you who want the maximum 3D performance, but a Zenoah G-62 will work also for scale speed. Loading this big warbird is easy—now, go fuel and fly!

The non-scale wide stance of the landing gear on the P-40 and larger rudder make takeoffs a breeze, even in crosswinds. The DA-85 gives you a lot of power to get the P-40 up and into any maneuver. We could not find a maneuver it couldn’t do, including the IMAC pattern. With the use of the very effective split flaps, landings are slowed. As with all warbirds, keep the landing speed up until the mains touch the runway. Be sure to always use some exponential in the elevator to avoid those over controlled hiccups on landing.

The TBM P-40 is steady as a rock and an ideal plane for your first tail-dragger warbird. It is predictable at slow speeds and has a straight line flight path to a smooth landing; you can use the flaps if you flare at the very last moment before touchdown.

Normally, this is not a word used to describe a warbird, but remember, this is a “3D warbird” designed to TRACK. The model stays on point until asked to move in another direction.

It won’t matter how big your flying area is, this P-40 will do it all. This aircraft will make you look good and wow your flying buddies when you stand it on its tail!

Slow speed stalls were predictable and felt straightforward. No tip stalls were detected, no matter how slow it landed.

We were lucky to catch the maiden flight on video, so you can also check it out on the Troy Built Models website (www.troybuiltmodels.com). Balance is critical to any model and this P-40 is no exception. I didn’t notice the P-40 wandering or seeking its own way, but rather, it stayed right where I left it. Using a 60% to 40% aileron throw also increased effectiveness for axial rolls. This is an exciting aerobatic warbird that is not for the beginner. However, it will also thrill those who are tired of looking at just another Yak or Extra at the field. Be the first one on your block to own one and be proud! 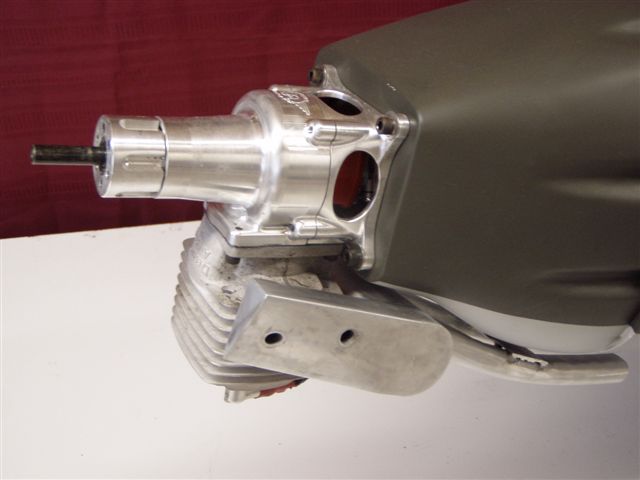 The DA 85 was designed to fit in the cowl with no cuts. This makes taking the cowl on and off to access the engine a breeze. Not even the spark plug hangs out! 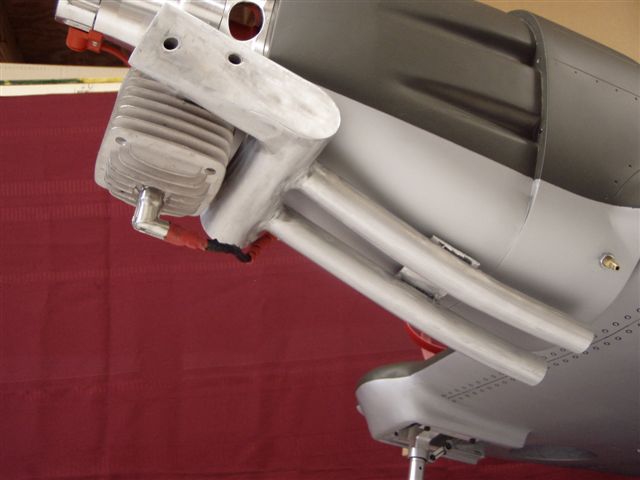 Custom Muffler and exhaust for the DA 85 is available from Troy Built Models or you could use a standard Pitts-style muffler with a Zenoah G-62. 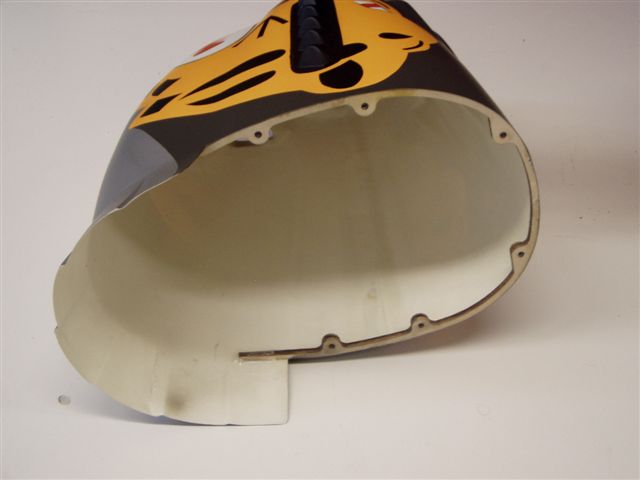 It only requires six screws to mount the cowl from the inside, so the 6-32 mounting screws will not show. A special long wrench is needed to reach the Allen heads. 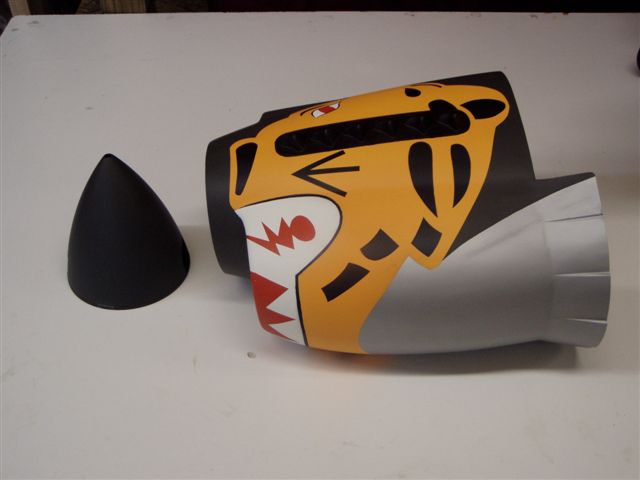 There is an optional carbon-fiber spinner for those who start their engines by hand, or you can use a metal spinner. 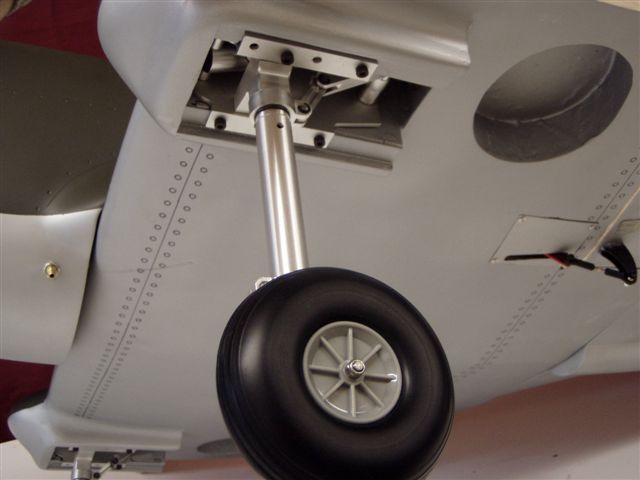 The well-built retracts are designed for the P-40 and come along with a retractable scale tailwheel. No need to search all over to find a match for your P-40! 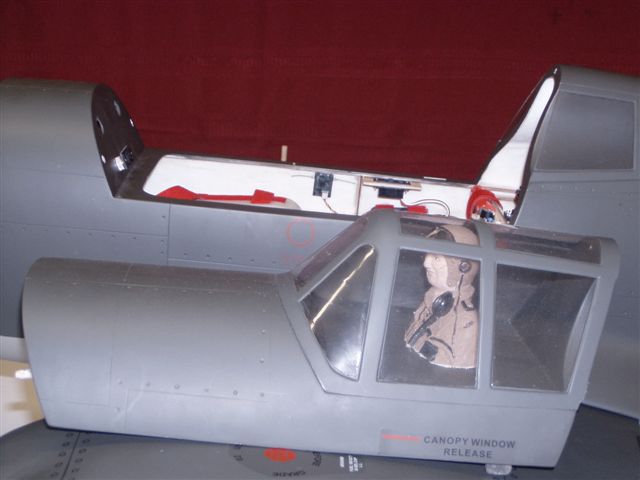 Access to the tank, radio and wing-mounting bolts are all done through this removable canopy with the pilot already installed. 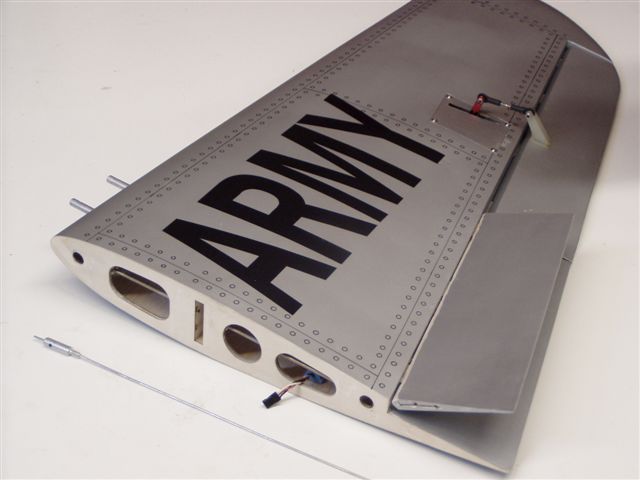 The inside machine gun is mounted to a single piece of music wire and then screwed into place to hold the outer wing panels in place.  This is a snap to install at the field and transport! 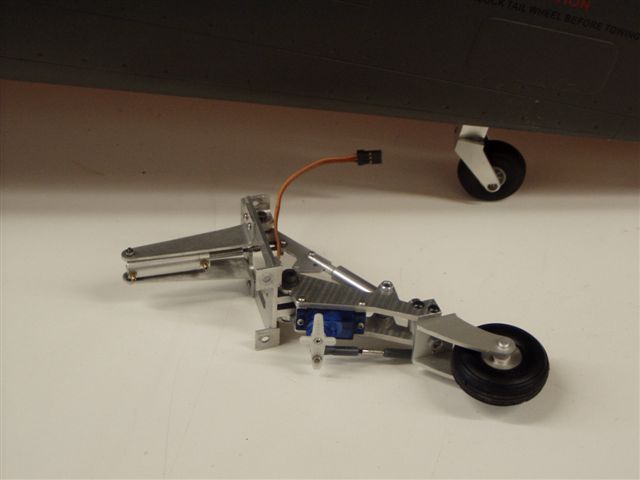 The retractable tailwheel is included in the kit; all you have to do is mount a small servo for steering and then hook up the air line for retraction. 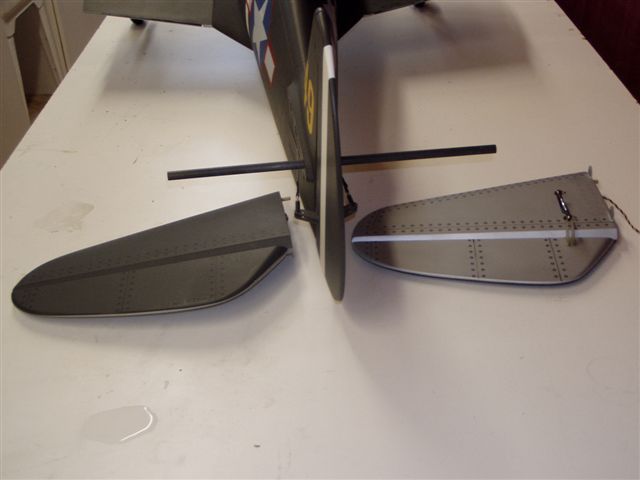 The stab is mounted on a carbon-fiber tube into the fiberglass fuse and is also removable for easy transportation.