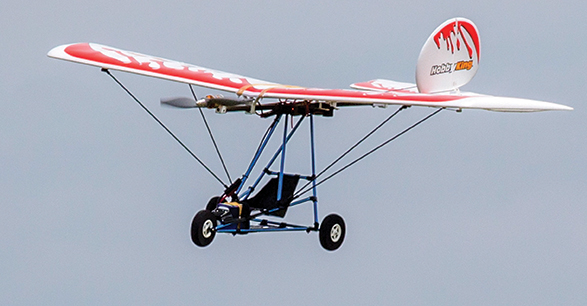 Slow Sticks are a fixture at nearly every park and flying field, but the MIA Designs Ultralight kit offers a fun way to give a different twist to this popular design. The overall look is reminiscent of the classic Quicksilver, particularly in flight, and it is a load of fun.

NOTABLE FEATURES
The Ultralight kit builds into an attractive aluminum frame suitable for mounting under a stock HobbyKing or GWS Slow Stick. The basic Stick airframe is retained, but the power system is upgraded to 2200mAh 3S LiPo with a suitable motor and prop.

Power options are wide open, and with its sturdy wing struts, the Ultralight can be built into anything from a lightweight slow flyer to a First-Person-View platform.

THE FRAME BUILD
The build begins with the tubular aluminum frame, which is assembled with nylon P-clips and nylon hardware. Assembly progresses quickly, and it’s possible to assemble the frame in an hour or two, using only basic hand tools.

Be sure to check the labeled diagrams to identify which aluminum tubes go where. There are two each Lower Base Tubes, Side Diagonal Tubes, Rear Upright Tubes and Front Upright Tubes. Labeled photos in the brief manual help to explain the correct geometry.

With the basic frame completed, the battery mounting plate, seat and forward deck are added, also using plastic P-clips and nylon hardware. The completed frame is attractive and sturdy.

THE PLANE BUILD
The next step is assembly of the Slow Stick. Since the airframe is essentially stock, the Ultralight can also be built as a retrofit for an existing Slow Stick. For my build, I used the HobbyKing Slow Stick (hobbyking.com), which differs slightly from the GWS version in having injection-molded EPO foam wings and tail surfaces. This makes for a slightly heavier and tougher machine that is not quite as slow-flying, but better able to handle breezier flight conditions.

Once the Slow Stick airframe is assembled, it’s mounted on the Ultralight’s wooden upper beam and secured with zip-ties. Finally, the 3mm carbon fiber wing struts are added. These not only give the aircraft a finished appearance, they also allow even the lightweight GWS wings to stand up to higher flight loads.

The Ultralight allows a wide range of power combinations. I settled on an E-flite (e-fliterc.com) Park 450 motor with E-flite 40-amp brushless controller and an APC 9×6E prop. This system pulls 13 amps at 7,600rpm, providing 70 watts per pound — more than adequate for a park flyer of this type. With assembly completed, it was time to head to the field.

The MIA Ultralight kit comes neatly bagged by sub-assembly. A tablet computer or laptop is handy for watching the YouTube assembly videos during assembly.

The frame tubes are assembled using plastic P-clips and nylon hardware. Assembly is quick and simple; just make sure you understand which tubes go where.

The main wheels mount to the axle tube via a bolt and press-fit anchor – simple and very effective.

The Ultralight frame can be completed in an hour or two, and you’re ready to proceed with the Slow Stick airframe. For my project I selected the HobbyKing Slow Stick, which has tough EPO foam wings and tail surfaces.

CONCLUSIONS
The MIA Designs Ultralight is a fun and quick project that turns a basic Slow Stick into an unusual model that attracts attention at any field. With the added payload capacity, it becomes a suitable FPV platform for budget aerial photography.

With the stable tricycle gear takeoffs are a breeze. Even in a mild crosswind, the Ultralight tracks straight as a string.

With its light wing loading, the Ultralight is happiest in relatively calm conditions, but it was able to handle turbulent crosswind conditions during early test flights.

The MIA Ultralight is an eye-catching airplane that is a lot of fun on calm summer evenings. Nearly every time I take it to the field someone with time in a Quicksilver or similar ultralight will take time to comment on it.