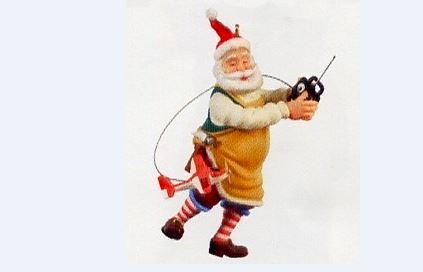 Twas the night before Christmas, when all through the workshop
Not a creature was stirring or sanding, the work had all stopped.
The airplanes were hung from the ceiling with care,
In hopes that new ARFS soon would hang there.

The R/C Modelers nestled all snug in their beds,
While visions of IMAC gold danced in their heads.
And practicing Lomcevaks & torque rolls in a cap (232),
Settled our brains with an outside snap (or two).

When out on the airfield there arose such a clatter,
I sprang from the bed to see if it was servo chatter.
Away to the window I flew like a Fieseler Storch,
Tripped and fell down, the stairs to the porch.

Dazed and confused I looked out at the snow,
The lustre from landing lights illuminated below.
When, what to my wondering eyes should appear,
But a miniature aircraft it looked like a Lancair.

With a little old driver,  so lively and quick,
a little like John, maybe Gerry, of course it’s St Nick!
More rapid than turbines his coursers they came,
And he hooted & holl’rd calling them names!

“Now Clevis! now Castor! now Pushrod and Carbon!
On, Crash! On, Spinner! on Propeller and Aileron!
To the top of the porch! to the top of the wall!
Dash-8, DASH-8 Avoid it you all!”

As scale Spitfires and Hurricanes fly,
So nimble and graceful when they mount to the sky.
So up to the house-top the coursers they flew,
A load full R/C goodies, and St Nicholas too.

And then, in a twinkling, I heard on the roof
The brakes locking up, good thing they’re rustproof.
As I shook my head in complete and total skepticism ,
Down the chimney St Nicholas came with a Speckrum DX7.

He was dressed in a flight suit, from his head to his toe,
They were covered logos for servos and nitro.
A bundle of R/C gear flung on his back,
Cool stuff like at Toledo,  I wanted his pack.

His eyes-how they twinkled! his dimples how merry!
His cheeks were like roses, his nose like a cherry!
His fingers glued together drawn up like a bow,
A little CA debonder will help them let go.

The end of an x-acto knife held tight in his teeth,
One little sneeze and it would stab something beneath.
He had a broad face and a little round belly,
That shook when he laughed, like a bowlful of jelly!

He was chubby and plump, an R/C pilot or elf,
And I laughed when I saw him, he was shaped like myself!
A wink of his eye and a Twist 3D in his hand,
He could really fly well and knew how to land.

He spoke not a word, but went straight to his work,
Filling stockings with servos and parts, how berserk!
And laying his finger aside of his nose,
And giving a nod, up the chimney he rose!

He jumped to his plane and shouted “ALL CLEAR”,
Then starting the engine he took to the air.
But I heard him exclaim, ‘ere he drove out of sight,
“Happy Christmas to all, I’m Flying JR tonight!”