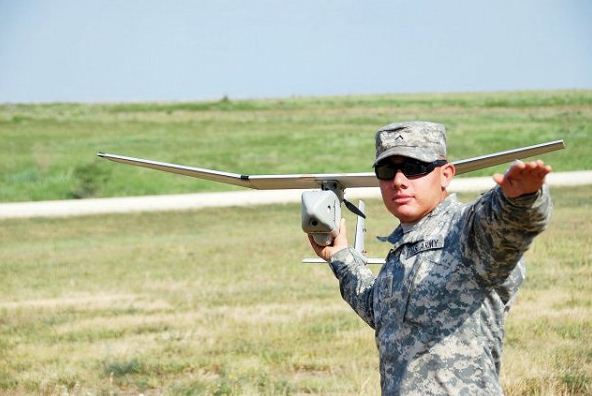 Remember learning how to fly RC? Maybe you used a buddy box or, like me, maybe you just had a very patient instructor (thanks, Gerry!). This article by Pamela Redford of the U.S. Army’s Public Affairs office in Fort Riley, Georgia, shows what it’s like for soldiers who are learning to operate and pilot Raven UAVs.

A mobile training team from Fort Benning, Ga., arrived at Fort Riley, June 7, to teach 15 Fort Riley Soldiers on how to fly one of the smallest unmanned aerial systems used by the U.S. Army — the RQ-11B Raven.

With two military instructors and two civilian contractors, the team took “Big Red One” Soldiers through a two-week operator class, followed by one week of master training.

Galusha and his team stayed at Douthit Range Complex’s barracks and used the Mock Airfield, which is equipped with a control tower, terminal and hangar; a 72-by-800-foot runway; an unmanned aerial systemm, or UAS, classroom; latrines and telephones.

But not all of the students will make it to the master training level, Galusha said.

“The challenge is to absorb the information that gets put out. There is a lot of information in a short period of time. It’s death by PowerPoint, but they have to know all of the emergency procedures in the air and be able to react. There’s so much that can go wrong,” he said.

The RQ-11B Raven is a hand-launched UAS powered by a lithium-ion battery.

Developed for the U.S. military, the Raven can fly for a duration of 60 to 90 minutes and travel anywhere from 30 to 60 miles per hour at an altitude of up to 500 feet above ground level, according to Gary Smith, range liaison, Douthit Range Complex, Directorate of Plans, Training, Mobilization and Security.

It’s rather small compared to the MQ1C Gray Eagles that belong to the Combat Aviation Brigade, known as the CAB; the Raven’s wingspan is 4.2 feet, and it weighs a little more than four pounds.

The payload consists of a high-resolution day and night camera and a thermal imager.

“There are many factors that affect how the Raven flies. It’s a really cool (UAS) — definitely some high-tech equipment here,” he said.

Teams of instructors from Fort Benning’s official Raven school typically visit Fort Riley about five times a year, Smith said, but they aren’t the only visitors who take advantage of the Douthit Range Complex facilities and amenities.

The 2nd General Support Aviation Battalion, 1st Aviation Regiment, CAB, 1st Inf. Div. partnered with the visiting unit by rating its Soldiers as they trained for seven weeks on the Mock Airfield.

As recently as May, both Kansas State University — Salina and the University of Kansas’ aviation programs received support from the Douthit Range Complex when they flew the UAVs at the Mock Airfield.

“The Mock Airfield is an outstanding training area,” Galusha said. “Fort Riley is one of the best that I’ve seen, Army wide, (and is) by far one of the easiest (installations) to work with. This area is real conducive to how we do training.”

Galusha has traveled to installations all over the world, including Germany and Hawaii. The best part of the job, he said, is seeing different installations and training Soldiers there how to take what they’ve learned back to their units and become leaders themselves.

Adding to the versatility and flexibility of the Mock Airfield is the external load training block training area, recently installed at the CAB’s request.

“The Mock Airfield is their favorite place for training because it saves time and resources,” he said. “The idea is to meet the needs of Soldiers with the best quality training we can offer.”