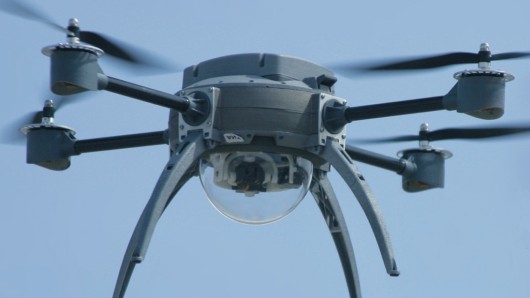 Here is a perfect example of something we take for granted in our RC world that can be useful for far more important things than just fun.  Quad copters have been somewhat common at many electric events and many of us have seen the Parrot AR Drone (we got to play with one). But here is a product that showed up at an RC trade show in California last year. Now it is being sold for something other than a fun product for the flying field. This report was submitted by Darren Quick for GizMag, check it out:

Younger owners of the Parrot AR.Drone will no doubt have discovered the advantages of such a device when gathering intelligence on siblings and parents. The Datron Scout Air Reconnaissance System shares a few similarities with the AR.Drone but, like the CyberQuad, is a quadricopter designed for slightly more critical missions. With a weatherproof design that allows it to capture and transmit high quality video in dusty and hot or cold conditions and winds of up to 50 km/h (31 mph), Datron says the scout is suited for a variety of military, law enforcement, fire and civilian applications.

First introduced at the Farnborough Air Show last year and currently on show at the Paris Air Show, the Scout is a lightweight Micro Air Vehicle featuring four small electric motors powered by a lithium polymer battery driving the unit’s four rotors. The Scout’s 20 minute flight time isn’t as long as fixed wing UAVs, such as Aerovironment’s Puma, but this is offset by the Scout’s vertical take-off and landing capabilities (VTOL) and its ability to hover over subjects. The Scout also has an operational weight of 1.3 kg (2.86 lb) and is man-packable with a snap together, tool-less assembly to allow for easy transport and rapid deployment in the field.

The tablet PC touch-screen control interface is designed with simplicity in mind with the user able to designate a point of interest or GPS waypoints and the Scout taking care of the rest. This allows the Scout to fly beyond line of sight or at night. In-built intelligent fault handling also allows the device to make automatic corrections in the event of communications link problems, excessive wind gusts or a low battery. The vehicle has an operation ceiling of 500 m (1,640 ft) and a maximum ground speed of 35 km/h (21.7 mph).

The Scout features a modular design with a quick-change payload interface to allow for the unit to be easily customized for specific missions. Datron offers the option of a 2-axis gimbaled 5-megapixel daylight camera or thermal imager, with video streamed in real time at distances of up to 3 km (1.86 miles) over a wireless modem or 802.11 b/h Wi-Fi. Video can also be fed to any other mobile device connected to the user’s IP network, such as an iPhone, iPad, BlackBerry, or laptop computer.

The Scout can also be integrated into a secure network through Datron’s ScoutNet application that will connect multiple vehicles and controllers over an ad-hoc digitally encrypted network.

To see images check out http://www.gizmag.com/datron-scout-mav/18991/