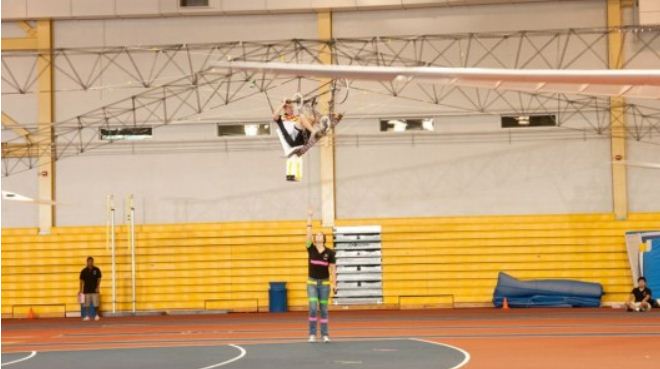 When we last reported on the University of Maryland students and their impressive Gamera II machine, they had only managed to get few feet off the ground. In this latest video, Gamera II gains 8 feet in altitude using just its pedaling passenger for power! Here’s the scoop, as reported by Claudine Zap of Yahoo’s Sideshow. After this video was posted, Gamera II reached 9 feet and stayed aloft for more than a minute!

“Students at University of Maryland are using pedal power to break a human-powered helicopter record (but hopefully to break nothing else).

As surfaced by the blog Popsci,  a video shows freshman Henry Enerson taking the vehicle up in the air—with nothing more than foot pedals keeping the thing above the ground—hovering eight feet up, and then making a smooth descent. The operation smashed previous records of human-powered flight. Think of these brave students as modern-day Wright brothers (and sisters).

As noted on the video description by the students who make up Team Gamera, “Henry smoothly pedaled Gamera up to just over 8 feet (2.5 meters) altitude and had a controlled descent for a flight time of about 25 seconds. This is not an ‘official’ record but is certainly the highest a human powered helicopter has ever reached.”

The students who call themselves Team Gamera aren’t done yet. The group’s flying contraption, the Gamera II Human Powered Helicopter, is recording test flights  at the Prince George’s County Sports and Learning Complex in Landover, Maryland.

The goal is to go as high as 10 feet, and capture the elusive Sikorsky Prize for the Human Powered Helicopter competition, worth $250,000 for a contraption that can hover at 10 feet for 65 seconds.

But mainly, the must-see video is just an amazing human feat.”