Caption: Commander Jason Geiger U.S. Navy wrote into MAN to tell us we had left out the SCAN EAGLE UAV in our feature “UAVs in Action published in the April 2010 issue. We simply did not have the space for all the great information and pictures we researched. Commander Geiger sent in this lead photo of himself out at sea with one of these UAVs. Commander Geiger wrote, “I can’t tell you how much more fun it made my recent detachment on board one of our ships as I got to hang with the operators and maintenance personnel, and get a first hands-on look at this great “RC” bird.  It sure dwarfs everything in my RC hangar!  Enjoy the pic!”

The ScanEagle entered service with the U.S. Navy in 2005. In addition to the United States military, the Australian Army also operates the ScanEagle UAV. As well the Canadian Government announced in August 2008 that they would lease the ScanEagle for use of their military operations in Afghanistan.

On 18 March 2008 Boeing, with ImSAR and Insitu successfully flight-tested a ScanEagle with a Nano-SAR radar mounted aboard. The Nano-SAR is the world’s smallest Synthetic Aperture Radar, weighs two pounds and is roughly the size of a shoe box. It is designed to provide high quality real-time ground imaging through adverse weather conditions or other battlefield obscurants. 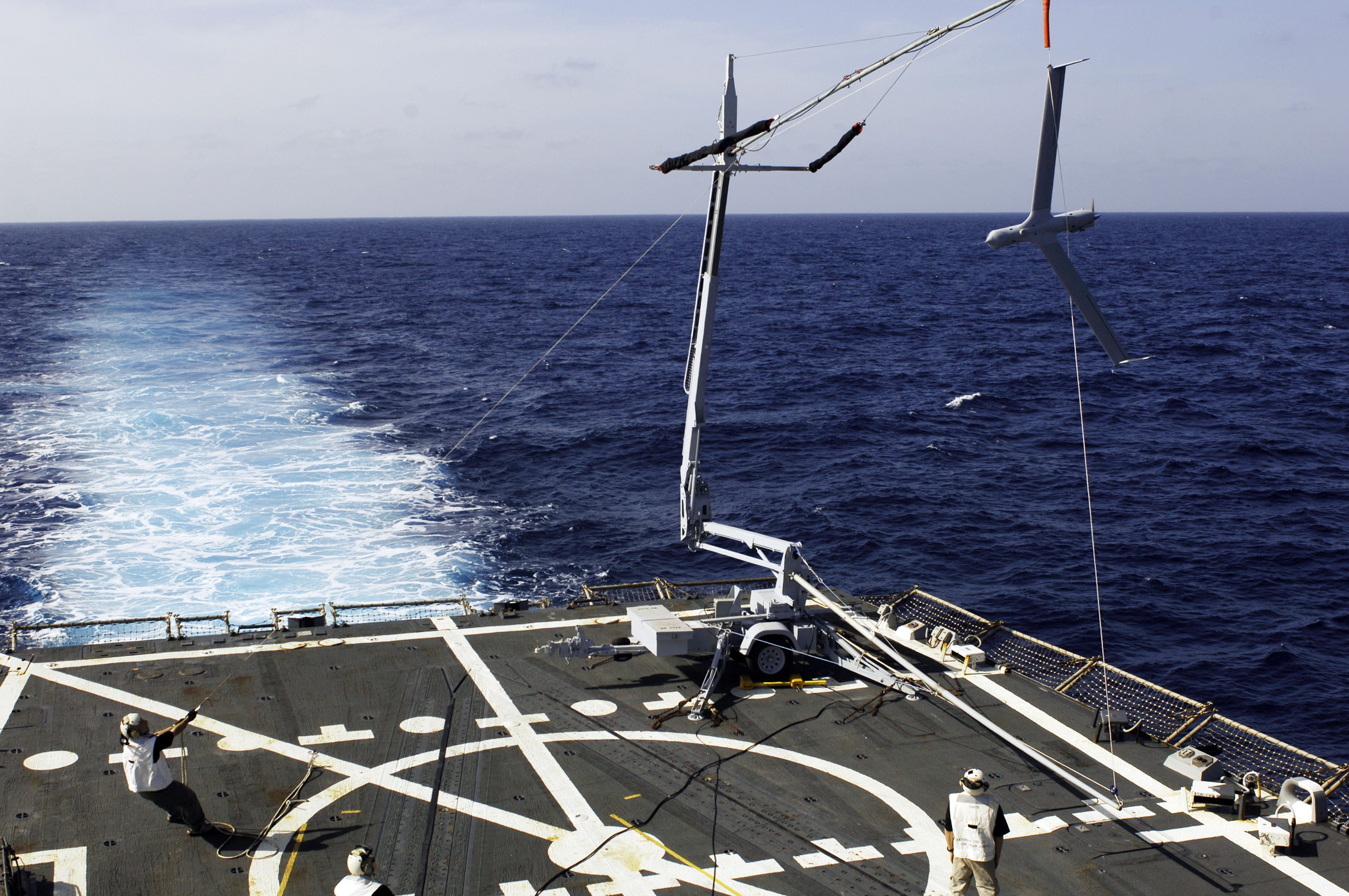 Caption: A Scan Eagle recovery onboard the U.S.S. Oscar Austin

ScanEagle needs no airfield for deployment. Instead, it is launched using a pneumatic launcher designed as part of a university engineering design project, now patented by Insitu as the “SuperWedge” launcher. It is recovered using the “SkyHook” retrieval system, which uses a hook on the end of the wingtip to catch a rope hanging from a 30 to 50-foot (15 m) pole. This is made possible by a high-quality differential GPS units mounted on the top of the pole and UAV. The rope is attached to a shock cord to reduce stress on the airframe imposed by the abrupt stop.

ScanEagle is a descendant of another Insitu UAV, SeaScan, which was conceived of as a remote sensor for collecting weather data as well as helping commercial fishermen locate and track schools of tuna. ScanEagle emerged as the result of a strategic alliance between Boeing and Insitu. The resulting technology has been successful as a portable Unmanned Aerial System (UAS) for autonomous surveillance in the battlefield, and has been deployed since August 2004 in the Iraq War. 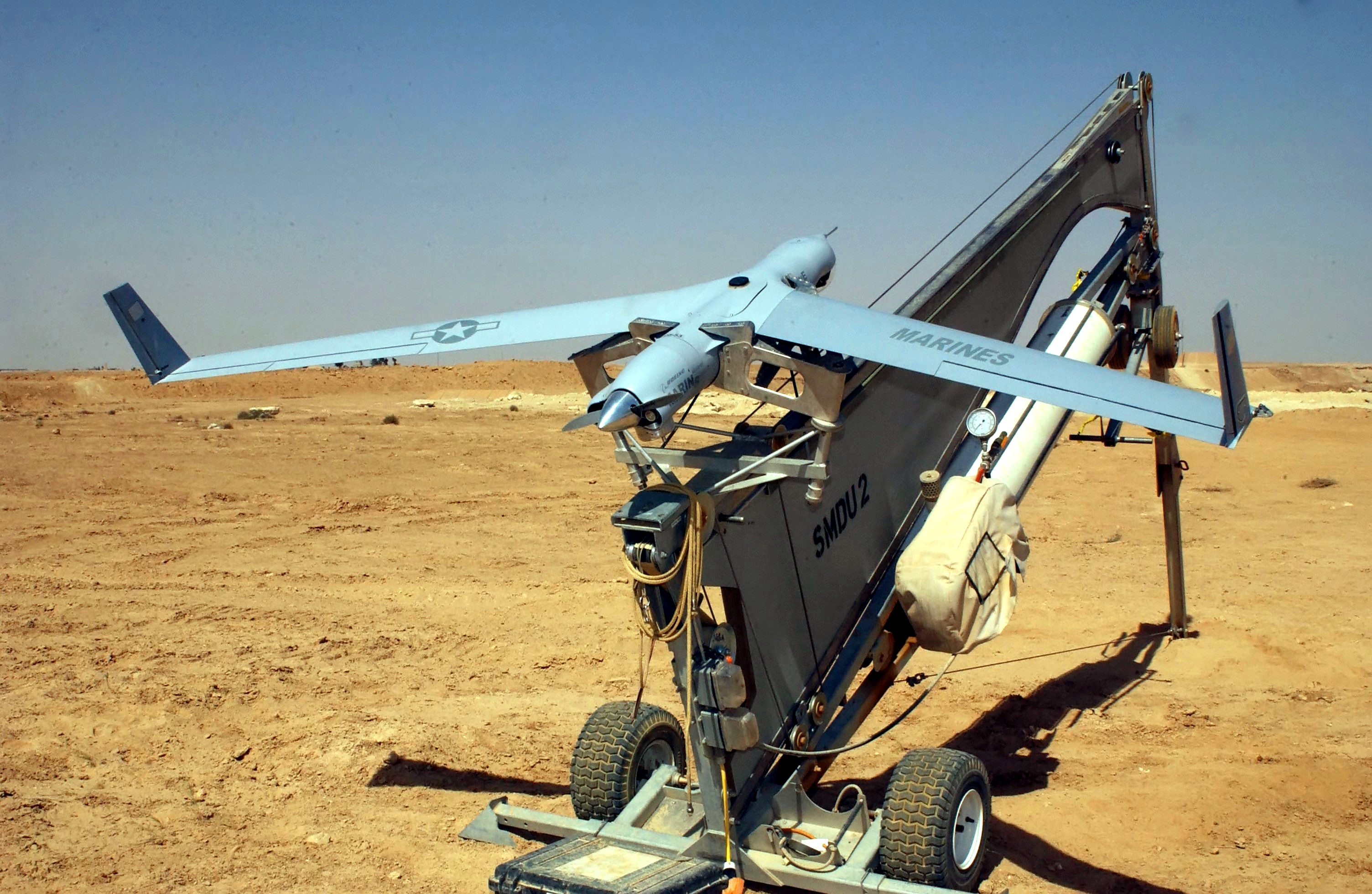 Caption: AL ASAD, Iraq–ScanEagle UAV sits on the catapult prior to launch. A small detachment of Marines and civilians is deployed here to provide intelligence, surveillance, and reconnaissance in western Iraq. The detachment is from Marine Unmanned Aerial Vehicle Squadron 2, 2nd Marine Aircraft Wing, Cherry Point, North Carolina. ScanEagle weighs approximately 40 pounds and has a 10-foot wingspan. The aircraft operates with a small engine, requiring a small amount fuel. Its 4-foot frame can remain airborne for more than 10 hours. Each drone is launched using a catapult system, which makes it runway independent and perfect for forward operating forces.

ScanEagle carries an inertially stabilized electro-optical and/or infrared camera on a light-weight inertially stabilized turret system integrated with communications range over 100 km, and flight endurance of 20+ hours. ScanEagle has a 10-foot (3 m) wingspan and can fly up to 75 knots (139 km/h), with an average cruising speed of 60 knots (111 km/h). Block D aircraft featured a higher resolution camera, a custom-designed Mode C transponder and a new video system. A Block D aircraft, flying at Boeing’s test range in Boardman, Oregon set a type endurance record of 22 hours, 8 minutes. 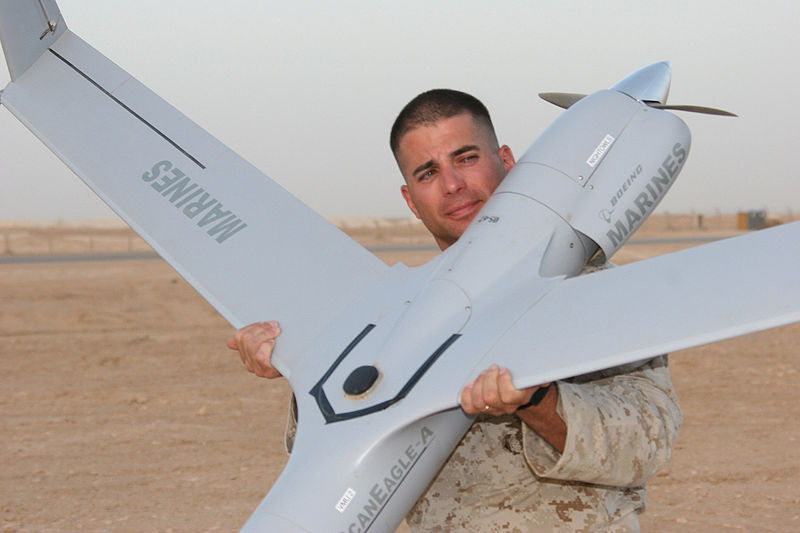 Caption: A US Marine holds a Scan Eagle in Iraq.

Of special note: On April 10 2009, a Scan Eagle UAV launched by the U.S. Navy observed an escape attempt by Capt. Richard Phillips. Phillips was the Captain of the MV Maersk Alabama, and was held captive by Somali pirates in the Indian Ocean after a failed hijack attempt.