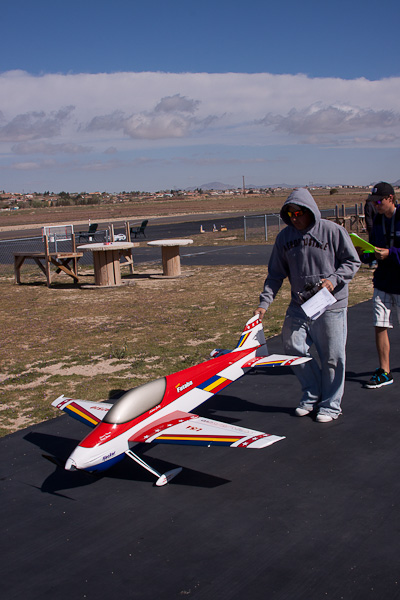 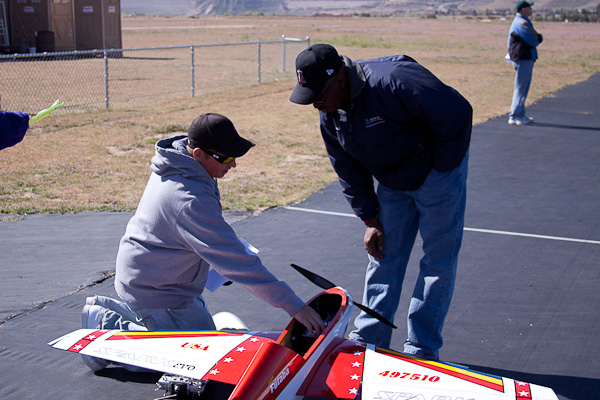 For those of you who asked, here are the results of the 1st Victorville pattern contest

The Victor Valley RC Flyers Club of Victorville Ca. hosted round 3 of the 2011 pattern season. The club did a fantastic job hosting this inaugural pattern event. A total of18 pilots from across the district braved the challenging conditions of cold temps and high winds completing 6 rounds over the 2-day event.  The FAI pilots flew 4 rounds of P-11 on Saturday and 2 rounds of F-11 on Sunday. Despite cloudy skies in the morning, 32 mph crosswinds, and 62 degree temperatures the contest was a blast. We did have one mishap. A special thanks to the pilots that drove in from out of town, some as far away as 6 hours, to support the contest. To Kris, Jon and Dale from Northern California, Greg and Debra Frohriech from Arizona, Andrew Jesky and the Taylor family from Utah, thanks.  Now on to the details of the contest.

In Sportsman we had 3 newcomers to pattern for whom this was their first contest.  Chris McMillin put in some outstanding flying to win 4 of the 6 rounds flown taking first place in this class. Chris was flying a 60 size Kaos. Way to go Chris! Richard Chrystie and Ron Scharck followed suit with 2nd and 3rd place. Next up was Intermediate with 2 pilots in attendance. Greg Meierhoff took round 1, but Mike Stroup had different plans and he won the next 5 rounds and the overall win. Congratulations Mike. In Advanced, it was the Dale Olstinke show. Jarvis won round 1 and Mike Greear won the second. With Dale on the ropes, he made his come-back winning the 4 remaining rounds. Dale placed first with Jarvis, Mike and Tak Takayama in tow. With Masters being the biggest class of the weekend (as usual) with 7 pilots, Kris Fitzsimmons laid down some outstanding flights winning the first 5 rounds.  The young 15-yr old Andrew Taylor and his e-powered bi-plane put on some heavy pressure to finish in 2nd place.  3rd place came down to a battle between Greg Frohriech and Jon (“The Sheriff”) Carter.  Greg came out on top with just 28 points over Jon followed by Bruce Brown, Lynn Burks and Bill Wallace. FAI was just a treat to watch. Andrew Jesky made flying in 20 to 25 mph winds look like a calm day. He just put on a flying clinic winning all rounds of P-11 and F-11. Following in 2nd place was Bill Sheets. In closing, a very special thanks to the Victorville crew of club members for having us at their flying site and providing a great lunch.  Thank you to Greg for CDing and to Big Mike, Jean, and Debra for the scoring duties.

“SEE YA NEXT YEAR”