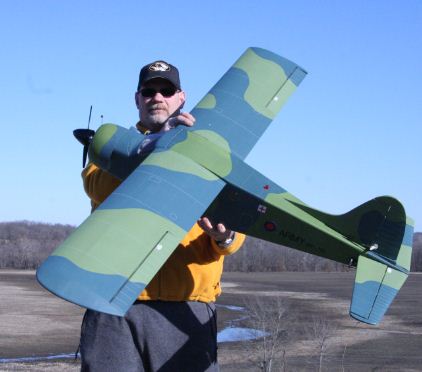 When you think of the De Havilland Beaver you are immediately drawn to a true aviation workhorse.  First offered in 1948 with production ceasing in 1967 there are still 100’s of these radial engine beauties out there in a variety of landing configurations and in multiple aviation roles.  Very much like the full-scale version, the R/C DHC-2 Beaver can also haul a load and has plenty of room for electronics, and some scale additions like a fully transmitter controlled pilot door.  Anyone that has flown in one of these aircraft, especially on floats, knows the intimate relationship between the door and the pilot in the docking process. 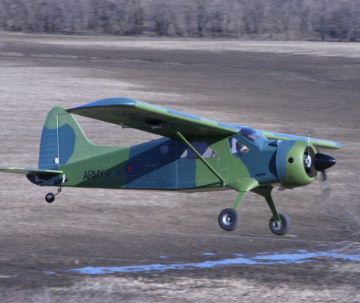 VQ Models is among the best at offering not only scale models, but offering these with incredible covering detail.  This ARF British Army version is an outstanding characterization of a wheeled tail dragger, constructed of balsa, lite-ply and a proprietary heavy-duty covering distributed by Hobby People.  The components are well designed with no unusual build procedures.  Once complete, you have a great flying scale version at only $149.99.

The DHC-2 Beaver is provided in this 63” wingspan version as an ARF designed for intermediate to advanced flyers.  Electric power instructions are included requiring an 870 watt motor, or 2-stroke engines from .46-.52 and 4-stroke engines in the .52 -.70 range.  Magnum engines are a perfect fit and are available in the suggested power ranges. 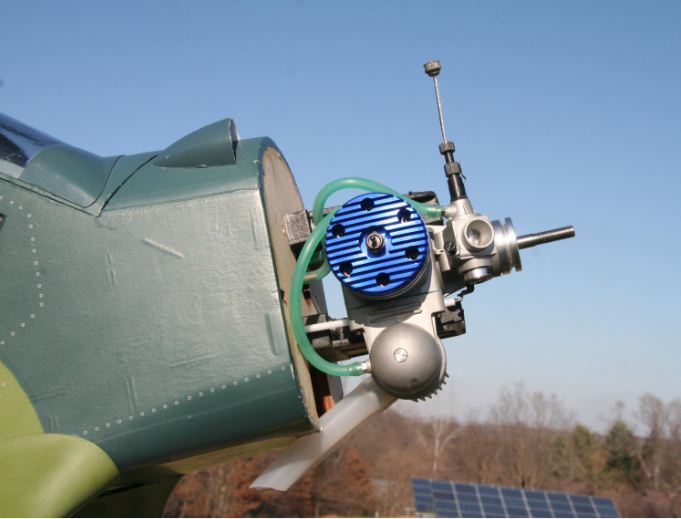 Unique features
Once you build a VQ model you become a little spoiled with the quality of the components and the ease in competing their ARF’s.  One would be remising in not immediately mentioning the covering.  The material is printed with incredible detail including fuel caps, rivets, service panels, the rear entrance door, elevator and rudder corrugation, and sheet metal seams.

The wings are two-piece and removable for transporting using an EZ link style wing strut connector that allows you to easily remove the wings.  Ailerons are across most of the trailing edge, but flaps are not included.  The wing has a flat bottom profile with an aluminum spar and wing loading of 22.39 ounces/square inch.  Access to electronics can be accomplished either under the wing, but without removing the wing you have a very nicely designed front window that is securely held in place with magnets and gives one plenty of room to get inside the fuselage.  The fully painted pilot and mount provide two features: The electronics are hidden, and as I did one can mount the MPI 6272 HD LiFe master switch inside the cabin for an even more realistic outside.  Cockpit dashboard decals complement the cabin. 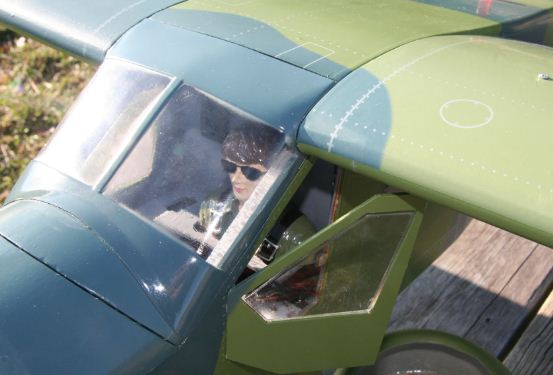 The main landing gear is aluminum with a slightly spread look using 3” main wheels and a hidden spring-loaded tail wheel steering assembly and a 1.25” tail wheel.  Main wheel fairings are plastic and require screws to secure them to the fuselage.  The look is realistic.

I mounted the Blue Head .52A XLS Magnum ABC with dual ball bearing and bushing support, with the XLP Magnum Pitts style muffler and .5” silicon exhaust extensions.  The magnum .52A is a good fit with the cylinder head completely inside the cowling and the carburetor just ahead of the cowling.  The Magnum engine comes with a rear mount needle valve, but I did not use it with this application.  A needle valve extension was needed though to get good access for tuning.  I did trim off about one inch of the tip of the motor mount to keep it inside the cowling.  A radial lite-ply cutout is provided to hide the engine, but this would typically be used with the electric motor installation.  A very handy magnetic round cowl provides absolutely complete quick access to the engine. The magnets do not come loose and wallow out like screws. 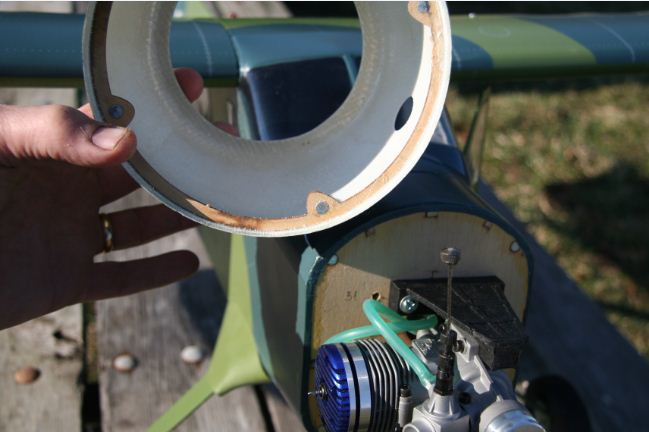 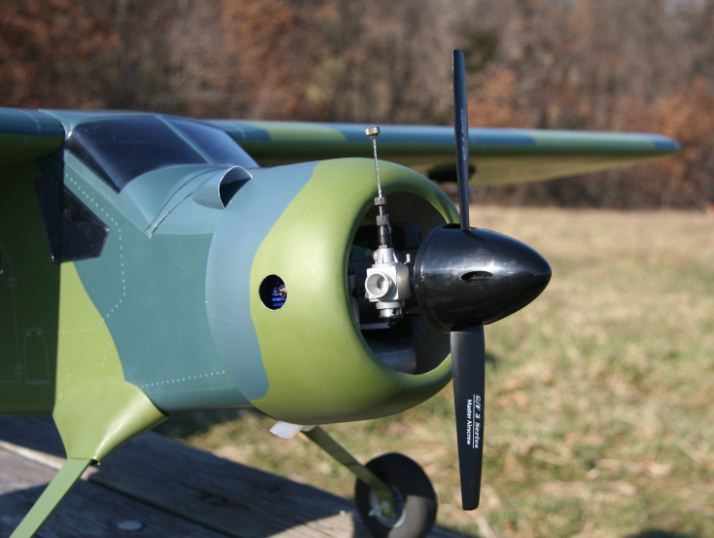 The 12-ounce tank is located just behind the firewall and is easily accessible.  This would also be the location of a 3700 mAh battery if built as an electric.  Weight forward is important and preflight required the addition of about 28 grams to the tail with the fuel tank empty.  Should you decide to use a 4-stroke Magnum .70-engine the additional weight would be a benefit.  Otherwise, CG must be between 70 and 75mm behind the leading edge.

Conclusion
Even though the model is an ARF, consider enough time to get the build correct, especially with the engine mount.  Electronics were no problem to install and I used HP-A50M high torque, metal gear, BB analog servos for the ailerons, throttle and rudder.  The elevator uses dual ailerons so you will have to have that programmability with your transmitter or perhaps a servo reverser on one of the servos.  The Airtronics RDS 8000 has this programmability and many more features necessary for complex flight setup.  Airtronic micro digital 94809 10 gram servos are located in the tail.  Larger servos could be used with some trimming of the fuselage openings. An MPI universal charging port was added just above the port wheel fairing and coupled with the master switch that is useable with the MPI Insta-Check Pro.  An onboard HP-MDL LiFe 6.6v 120 mAh 2S battery provides plenty of power for a days worth of flying. 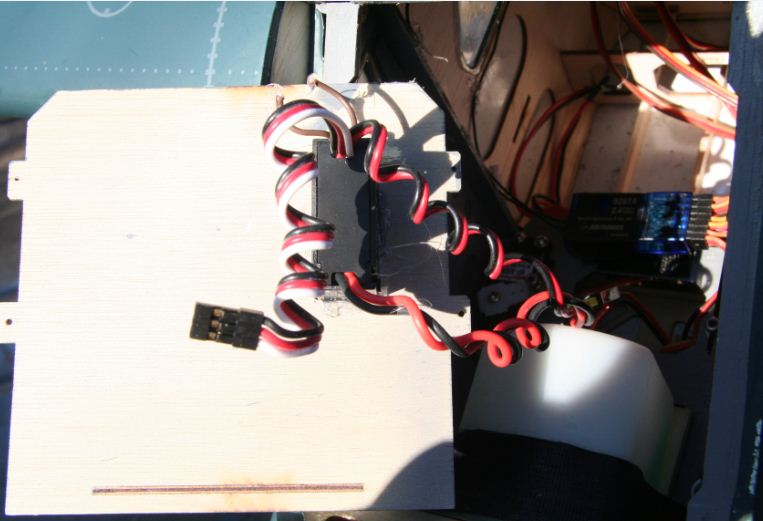 IN THE AIR
In a tail dragger configuration you can easily fly off of grass or a paved surface.  In fact, I was impressed at the fact the surface can be somewhat rough and grass does not have to be cut to golf green length to easily take off and land.  No nose-over tendencies were present through my flight tests.  Tracking on take off is very straight and only a slight amount of rudder is needed to keep the Beaver tracking right down the centerline.  Take off roll is about 75 feet, and the Magnum .52-engine is a perfect complement for not only power, but also scale performance. Lift-off is gentle and once in the air the typical trimming to establish straight and level flight is all that is needed.

Once trimmed, the flight envelope revealed no difficulties for the intermediate flyer.  The wings provide great lift and the ailerons give authority in response to the prescribed settings.  No need to exaggerate the control movements.  Aerobatics if you feel the need are there, with big loops, wide rolls and inverted flight.  Stalls are as they should be with a slight tip drop before dropping the nose and entering a spin.  None of the sequence occurred for me without forcing either a power-on of power-off stall.

Before flight I mixed the rudder with the ailerons to have well-coordinated turns, but after the first landing I reduced the mix to only about 10%.  The rudder has a lot to do with flying the Beaver.

Flybys give your local club something fun to look with more speed at full throttle then one might expect.  Even though the cowling is blunt and open, the slipstream is pretty clean. Landings are as well with some speed.  Not at all like a warbird, but getting the DHC-2 Beaver slowed down is not easy.  Flaps would be a really nice addition, as on my first landings I noticed I was using up most of the runway.  The glide slope is shallow, but not coupled with stalls, so once you get used to the flat landing slope the landing are very easy to accomplish.  Rudder control is good throughout the landing sequence and does not increase or reveal any nasty landing tendencies.

General Flight Performance
>Stability – As one would expect with a high wing tail dragger, the plane follows the motor perfectly.  No unnecessary trims were necessary.

>Tracking  -The motor coupled to the firewall was aligned and through out the throttle range the plane was easy to control and inputs were minimal to keep the Beaver straight.  Mixes enhance the turns and tracking

>Aerobatics – If you want to do aerobatics they are easy to accomplish and the Magnum .52 provides plenty of power to roll, loop and fly inverted.

>Glide and stall performance – The glide is shallow and getting the Beaver slowed down requires plenty of final approach separation from the end of the runway.  Stalls can be induced, but are not present in the normal course of flying and did not present themselves unexpectedly.

Pilot Debriefing
Take the time to be sure the CG is correct and include at a minimum a rudder to aileron mix.  As a tail dragger, this is very controllable aircraft with great looks and excellent flight character.  Scale appearance is incredible and the addition of the remotely controlled pilot door is just the beginning of possibilities.  You will enjoy the DHC-2 Beaver throughout the flight envelope.