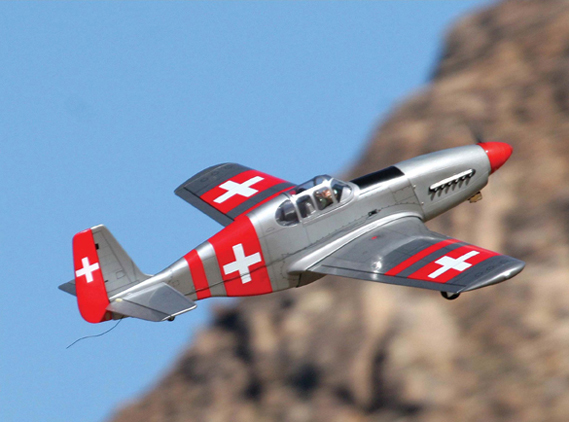 The control linkage is easy to install and gives a very positive feel for the rudder and elevator.

The Swiss markings give a different look to the P-51B than is normally seen at your flying field.

THE P-51 MUSTANG has long been recognized as a great fighter airplane and an outstanding icon during WW II. There were 15,469 Mustangs produced between 1940 and 1945. It seemed as though every country in the world wanted them and the Swiss were no different. During the war there were a number of aircraft that landed in Switzerland; some were defectors and others had just suffered damage and could not make it back to their base. Once the planes had landed, the pilots and planes were interred for the duration of the war. In 1944, a P-51B landed in Switzerland; the Swiss confiscated the plane then repainted it in their colors and conducted tests. In late 1944, they purchased 130 Mustangs from the U.S., which were to be used for only three years until there were enough jets to service their front lines. However, because they were great favorites of the men who flew them they survived for 10 years.

This P-51B is a .46-size model that is covered with fairly accurate weathered-detailed covering in Swiss colors and scale panel lines. In the box you’ll find a good quality fiberglass cowl, canopy, a hand-painted WW II pilot, fuel tank, spinner, fuselage, wings, elevator, rudder, landing gear wheels, tail wheel, and all the necessary hardware to complete the plane. Instead of a manual, an easy-to-follow, 32*24-inch plan sheet with illustrations shows all stages of construction. The P-51 has fixed landing gear, although it is set up for optional retracts.

� Very stable in the air

The tail wheel is positioned at the rear of the fuselage, the same as the full-size plane, giving a scale look.

The fuselage area is not large but still roomy enough to fit all the radio equipment.

Construction starts with the wing because once the wing is finished it is bolted to the fuselage and used as a guide to align the stab. The ailerons are already attached to the wing along with the control arms. There is a �-inch plywood joiner that fastens the wing halves together and also gives the proper dihedral. The aileron servo is installed in the center of the wing in the cutout already made there. The landing gear is next; the wing is set up for either fixed or retract gear, and I opted for the included fixed gear. There are also plastic coverings for the wheel wells. If fixed gear is used, fasten them on with silicone so you could remove them in the future, and then install retracts. Once the wings were done I bolted them to the fuselage and attached the stab, made sure it was lined up correctly, and glued it to the fuselage with epoxy. Install the fin in the slot that’s cut out in the fuselage. At this point I installed the engine mount so I could set the plane on its tail while I aligned the mount to the firewall.

After I fastened the engine mount to the firewall with the supplied bolts, I hinged the elevator to the stab with CA. Now is the time to attach the tail wheel bracket to the fuselage; this has to be done before the rudder is glued to the fin. The pushrod tubes are already installed so it is a simple matter to insert the pushrods, making it easy to line up the control horns and fasten them to the control surfaces. The fuel tank is next, and then the engine. I used a Saito .72, which fit the plane perfectly. The fiberglass cowl is of very good quality but needs to be cut out to fit over the engine; a Dremel tool works well here. Glue the supplied pilot into the cockpit and fasten the canopy to the fuselage with screws. All the hardware is metric and the wheels are of good quality hard foam. After I installed the radio I checked the balance and had to add 1.5 ounces to the tail to get the P-51 to balance at the CG. The decals are already on the airplane; the next step is to go fly.

The P-51B is a fairly easy model to build and took me about a week to finish. Even though there are no actual step-by-step instructions, the illustrated plan sheet is very well detailed and even a novice builder would have no problems. The scale covering looks very realistic and to have it in the Swiss markings is very different than the usual Mustangs that you see.

At the field, I started up the Saito .72 and taxied the P-51B out on the runway. The P-51 has a wide landing gear stance, which makes tracking straight on takeoff easy with very little right rudder. As with all tail-draggers, a little up-elevator is needed to keep the tail on the ground until flying speed is attained. The climbout was nice and smooth, and at the proper height a little trim was needed for hands-off flying. Landings are fairly easy; just line up with the runway and let the plane settle in using throttle and elevator for smooth landings.

STABILITY The P-51 is solid in the air at all levels and is a comfortable to fly; the Saito .72 is a good match for this plane.

TRACKING Ground tracking is great with the wide landing gear stance, and in the air the P-51 is smooth and goes where you point it and stays there until you change it.

AEROBATICS This is a warbird and will do all the aerobatics that the original fighter pilots trained for in combat fighting.

GLIDE & STALL PERFORMANCE In the air, I moved the throttle to idle to see if the plane would fall out of the sky. I was pleasantly surprised to find that the P-51 just floated along, and then finally dropped the nose but recovered quickly when power was applied. The glide ratio is very good for a scale plane; while not a floater, it also does not drop like a stone.

I was thoroughly impressed with the P-51 Mustang from VQ Models. The scale covering looks very realistic and to have it in the Swiss marking is different than the usual Mustangs that you see. In the air, the Mustang flies as well as and will do all the maneuvers the full-size plane was capable of. This very stable aircraft goes together quickly and looks good. Anyone who is into WW II planes would be glad to have this one in his hangar.