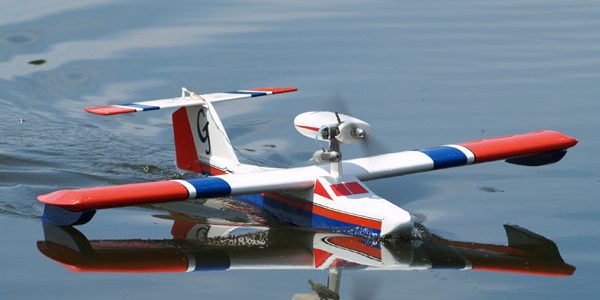 With 70% of the earth covered with water, shouldn’t we have a similar percentage of RC model float planes? Well, maybe that’s too much to ask for but if have never given it a try, you’re really missing out. And with suitable open flying sites becoming more difficult to find, flying from public waterways, is a viable and fun alternative to sod runways. 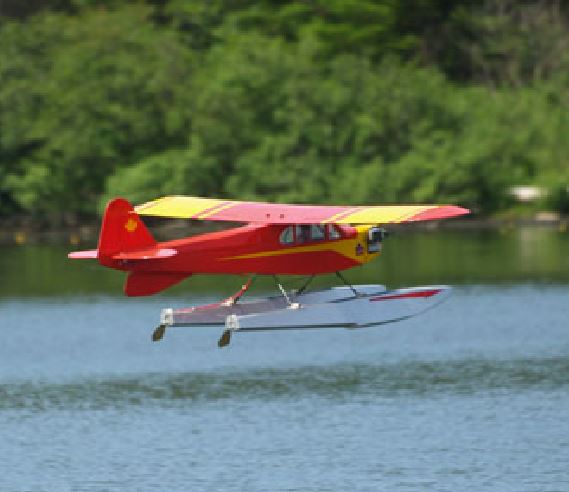 Flying off water is new to many RC pilots; however, water planes have existed since the birth of powered flight. Airlines like Pan American used large flying boats like the Yankee Clipper. Canada’s north was opened through the extensive use of bush planes on floats, de Havilland Beavers, Otters, Beech 18 and are still used today. Dick Folsom of Folsom’s Air Service based in Maine put a DC-3 on floats. 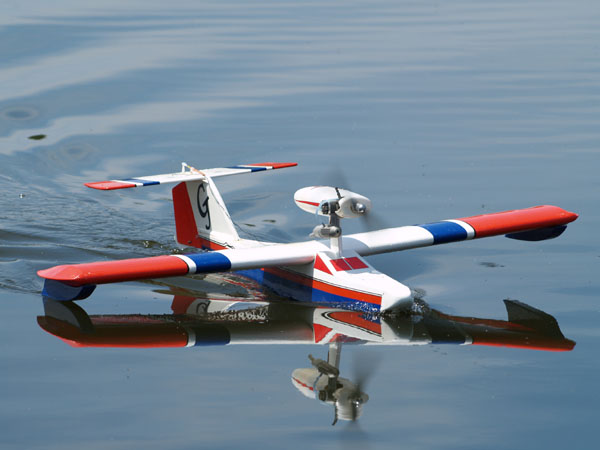 The scale modeler has no shortage of subjects. The sport modeler has options for floats too. Many of the popular ARF companies offer float aircraft like the ElectriFly G-44 Widgeon or Seawind. There are floats available for many ARFs including the Hangar 9 J-3 Cub. Regardless of what aircraft you fly, odds are you can buy floats that can be bolted on.

There’s a plethora of information available from the float manufacturers, online stores, and in many back issues of Model Airplane News regarding how to build and mount floats, where to locate the step, how to waterproof radio gear, and more (see the sidebar for some of the setup basics). Two areas that are often neglected are flying from salt water and how to retrieve a stalled aircraft without going for a swim. Flying from water in Atlantic Canada often means flying from salty or briny brackish bodies of water. It is the same as far as the flying goes but when your aircraft gets a lot wetter than planned, you need to hop into action. 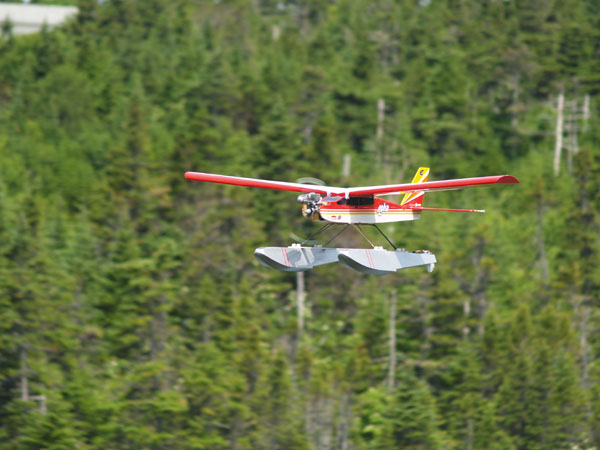 First of all, take all the usual precautions to ensure that your receiver, servos, wire connectors, wing saddles, etc., are all well sealed. Anti-corrosion sprays for electronics are available from hobby shops that deal with RC boats and they really will help protect your electronics. Saltwater is corrosive and will destroy your electronics if not cleaned properly. If your plane does get wet inside with saltwater and it gets into the electronics, it is of the upmost importance to open up the servo and receiver cases and rinse the electronic components with warm distilled water to flush out all the salt. You should also use a hair dryer and really dry them out and spray the components with the protectorant before reassembling your RC gear. 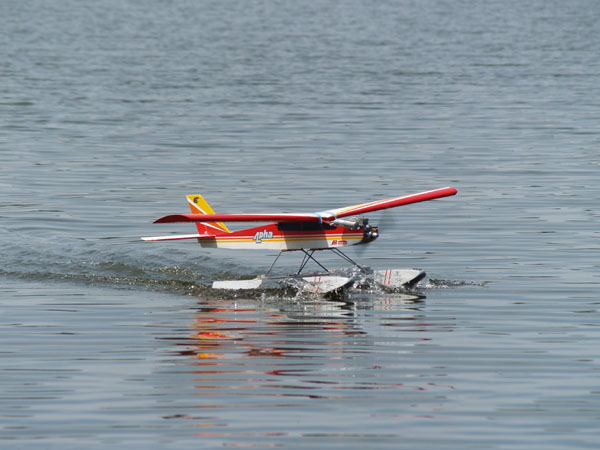 Don’t forget the airframe—metal pushrods, control horns, should all be cleaned and given a good dose of the anti-corrosion spray as well. Don’t forget the switch harnesses and servo extensions too! For glow engines, rinse the with fresh warm water, remove the glow plug, flip it over a few times to make sure all water is out, give it a good spraying of WD-40 and then add a several drops of after-run oil. Replace the glow plug, start the engine, and run a tank of fuel through it.

Occasionally, you’ll need to retrieve a aircraft stalled on the pond. If it’s a club organized event, there is usually a dinghy, canoe or a rowboat of some type available. 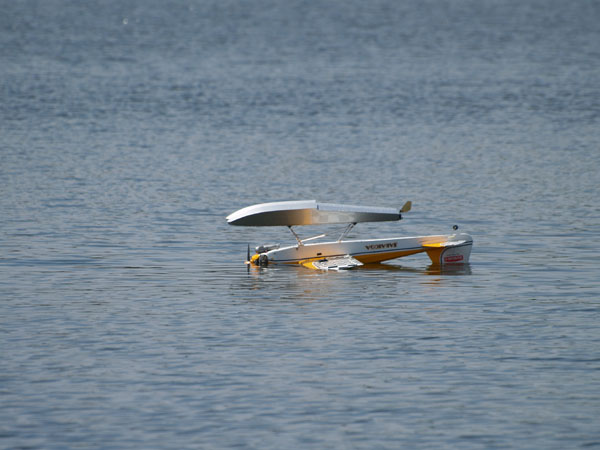 When retrieving the aircraft, follow safe boating practices by using life jackets, and carefully lift aircraft into boat. It may be heavier than expected with water inside the aircraft. Another fun option for retrieving a stalled floatplane is to use an RC boat. 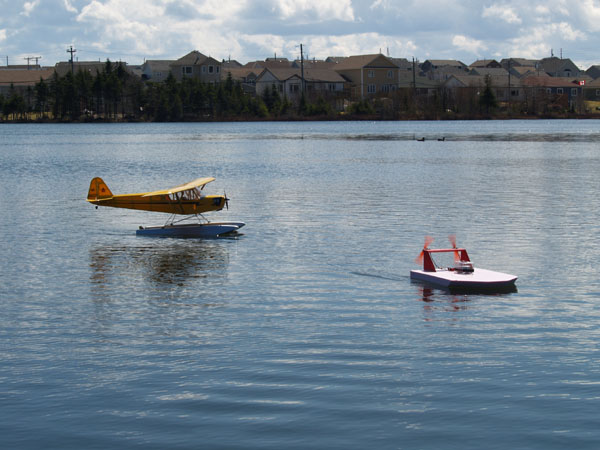 A tennis ball and 20 feet of fishing line attached to the RC boat can be used to retrieve a stalled floatplane. 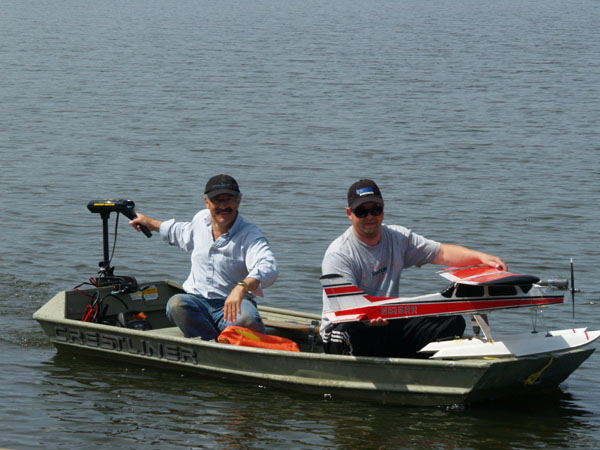 With the tennis ball in tow, make two or three circles around the aircraft. The ball will hook in the aircraft then tow it back to shore. It takes a little practice and is a lot of fun too. 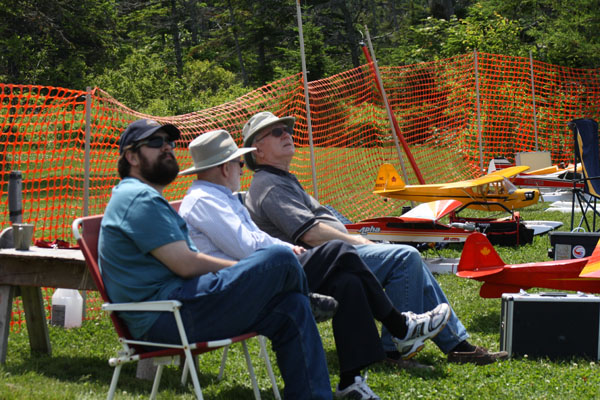 There are many RC clubs that have float fly events and some modelers fly off floats much of the year. It does require a little preparation and is a relaxing way to fly. Trainers, scale, sport planes, aerobats and any other plane you can think of can all be successfully converted and flown off of water.