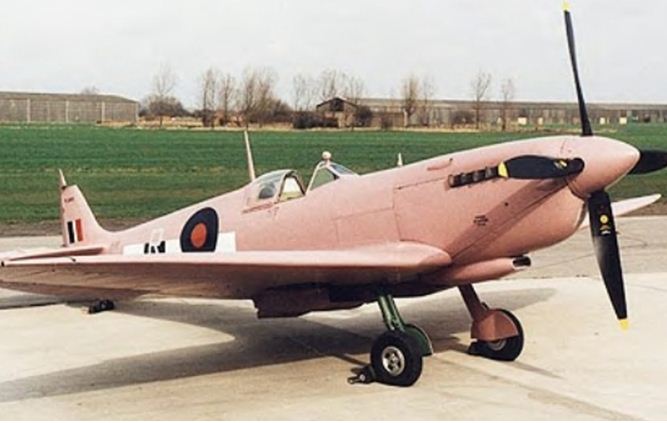 Sand and spinach, sea-foam gray, navy and duck-egg blue … we’ve seen a lot of schemes for WW II Spitfires, but a pink one? We came across this interesting article on io9.com and think it’s worth sharing. Author Esther Inglis-Arkell writes, “World War II marked a time of great innovation, which was sometimes practical and sometimes loony. Those two kinds of innovation came together when great military minds decided that to keep an airplane from being spotted, they needed to paint it pink. Find out why a pink aircraft can get lost in the sky.

The Spitfire is a much loved plane, even today. Built in the late 1930s, it has the look of a classic airplane, with an oblong, slightly rounded body, wings that look like a huge oval strapped to the plane, and a ‘blister’ of glass over the cockpit. Whenever someone steps out of a Spitfire they should have on leather flying gloves and an aviator’s scarf blowing in the wind. That scarf, however, may be very tough to match with the plane. Spitfires went through extensive rounds of camouflage paint, from dark and light brown, to a pale gray, to a baby blue. Perhaps their most unusual color, though, was a light pink.

The pink, slightly too washed-out to be an actual baby pink, still seems bright enough to signal every enemy within five miles. This is certainly true when the Spitfires were seen from above. They stand out brightly against the ground. To make sure they were rarely seen from above, these planes were painted to fly just under cloud cover. Although the planes were ideally meant to fly at sunset and sunrise, when the clouds took on a pinkish hue and made the plane completely invisible against them, they were also useful during the day. Clouds are pinker than we give them credit for. We perceive them as white against the sky because the particles in the sky scatter blue light, sending some of it down towards us and letting us see the sky as blue. Clouds scatter every kind of light, and against the intense blue sky look whitish gray. But their color depends on what kind of light gets to them, and what they are floating next to.

Although we see the sky as a radiant blue, the particles are actually filtering out a lot of the blue light that gets down to the earth’s surface. When the blue light is scattered, a good deal of it goes right back up into space, which is why the atmosphere of earth glows blue in some pictures. This filters out a good deal of the blue that gets to the clouds. The clouds scatter what they have, which is a spectrum of light with at least some of the blue filtered out, shifting the overall light ever so slightly towards red. Add to that the fact that the water droplets in clouds can diffract light at different angles, and the clouds are often rife with pastel shades of pink, orange, and green. They look white compared to a glowing blue sky, and a quick glance leaves people with the impression that they are white, but a long look should reveal this shifting, if minor, shades. A light pink plane is safer against them than anyone would expect.

It is much safer against them than even the pilots would expect. One of the troubles with the Spitfire was the fact that the pilot felt garish and exposed. Having to keep an eye on the sky above to check for enemy aircraft, fly with cloud cover, and frequently fly at dawn or at sunset, and these Spitfires were real challenges to their pilots. There’s no denying that the camouflage works in the video. About six minutes into the video, when the plane flies, you can see it’s very noticeable against the blue sky, but suddenly blends extremely well as it passes in front of small clouds. As early spy planes they allowed the Allies to collect much-needed data, while flying close to the ground. And of course, in the evenings, when the sky was pink with the sunset, they were far more invisible than a white plane shining against a pastel cloud. Pink Spitfires are lovingly maintained today, enjoyed for both their service and their relative novelty value. Let’s hear it for pink.”