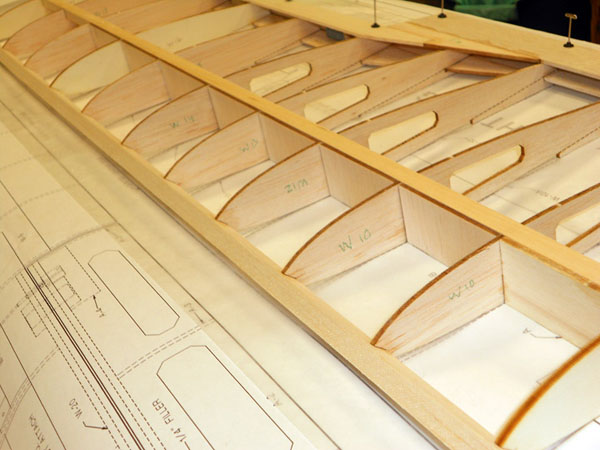 Designed by Tom Herr, the new laser-cut 72-inch-span Taylorcraft is the first glow powered airplane kit from Alien Aircraft. Following the same precise and well engineered design process, the Taylorcraft features easy to assembly parts and produces a strong yet lightweight structure. The model is being build by Mike Greenshields and the Scale Squadron of Southern California club, who were excited to be offered the chance to build a scale aircraft for a MAN review.

Mike reports: “We are excited about this new Taylorcraft kit. To us it looks like a trainer disguised as a scale model which means its going to be strong, durable, stable, and look GREAT because it looks like a real airplane. Digging into the kit, we immediately found well-cut-out laser parts with very detailed manual and plans. As you’ll see in this first sequence, it would seem ANYONE at any skill level could build this kit. Tools and a decent work area are required.”

Mike also comments: This Taylorcraft may be great not just for sport-flying, but for training to fly or even training to fly at scale competitions. It seems like a perfect plane for the new Pro-Am classes at Scale Masters!

As an online Build-along project, we will be updating the Model Airplane News website as the model comes together. For more information on this and other Alien Aircraft kits, go to www.alienaircraft.com.

The specs for this attractive sport scale classic are:

This is the first installment of the assembly for this new and beautiful Alien Aircraft 72″ wing span Taylorcraft. For you scale fanatics, this model is inspired from the BC-12D model and has the small window shape.

Initial Comments: The box is NOT fancy. In fact, its just a shipping box. You’re only going to find it on-line at the Alien Aircraft website so you’re not paying extra for packaging and frills normally needed to sell kits in a model shop. The kit arrived in perfect condition, all the parts were there and accounted for. The kit did include a molded plastic cowl and printed plans. The manual can be downloaded, for free, from the manufacturer website (which is OK since you had to go there to buy it anyway). The laser cutting is ultra-precise and very clean. Our initial impressions were good and anticipation to build this kit, as a group club-project grew the second we opened the box.

1-Assembly starts with the tail-section. Each piece of the tail section (elevators, horizontal stabilizer, rudder, vertical stabilizer) is 3 pieces of wood laminated together. The “middle” lamination is laser cut to the shape of the part and has lightened areas (as you can see on the plans). The “outer” laminations are cut by the builder from sheets of balsa. This is a quick assembly method and creates a part that is less apt to warp as cutting these parts from a single sheet of 1/4″ balsa. Parts here are glued and cut, but not yet sanded.

2. Framing the fuselage is a bit of work but not difficult. It starts by laminating and fitting several different parts to make up all of the formers and top and bottom planking. The instructions are detailed and logical in terms of build-order. You will not “build yourself into a corner” if you follow the well thought-out Alien aircraft manual. (download for free on line at www.alienaircraft.com). We found the parts fit to be PERFECT. That’s saying a lot! We highly recommend the use of clamps when pulling the tail portion of the fuselage together bring it to shape with the formers and top and bottom sheets. Note that all the parts interlock! This is going to be one STRONG fuselage! All of these parts are plywood! 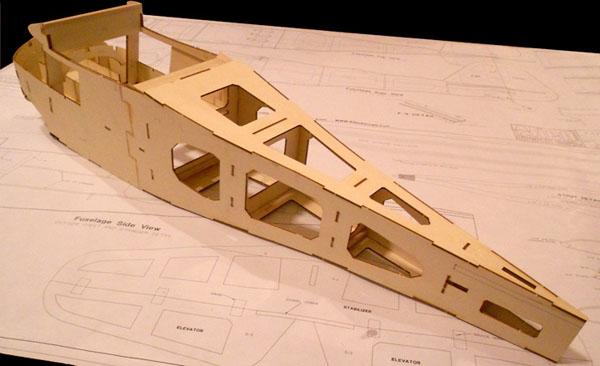 3. The fuselage as viewed from the back. Notice there are cutouts for the horizontal stabilizer but it’s not cut out yet. This was good planning by the kit maker to keep the alignment of the tail during assembly. 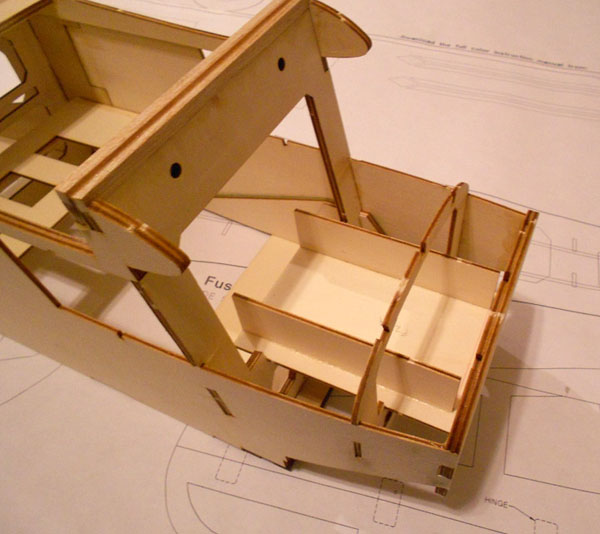 4. The fuselage nose shows the fuel-tank mounting area. This is a nice tray that will make installation of the fuel tank simple. Yes, it’s going to be a glow fuel burner. Alien Aircraft also makes this Taylorcraft with electric in mind. So, you can build it any way you want. (details on their website).

Teaser: We know this looks like a slab-sided square un-scale-like model. But it’s not true! This Taylorcraft does capture the true shape of the fuselage with stringers that are applied a little later in assembly. 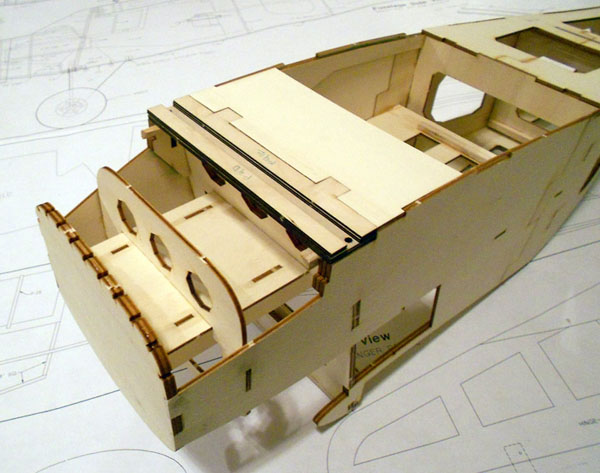 5. The landing gear mounting block is unusual. it is built from several layers of thinner plywood. This laminating system will provide a VERY STRONG gear mounting plate that is notched into the fuselage for strength.

6. This view of the wing’s center panel shows the nice building tabs on each rib. This wing self-jigs on any flat building surface. The wing is 3-piece. There is a center section that is flat and matches the shape of the fuselage. Then there are the outer wing panels set at the proper dihedral. This gives a very scale formed wing with dihedral breaks in the proper spots.

This view also shows our first modification. The plywood doubler for the mounting screw positions was originally set on top of the wing surface. We changed the lamination slightly and kept this mount flush. The original design will work fine. This was, however, an easy change that will give the plane a more realistic appearance. Building your own plane allows you the ability to make small customization changes to help make the plane your own. 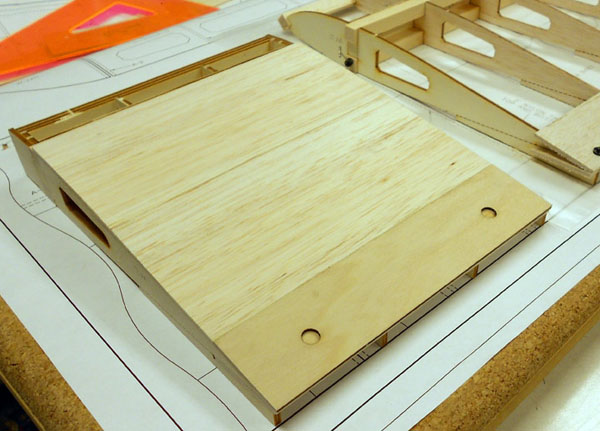 7. Here is another view of the very strong wing center section.

8. One wing panel is assembled ready for sheeting and other details. This is a d-tube wing structure with bass-wood spars, shear webbing, top and bottom trailing edge sheet, and the typical d-tube sheeting structure with rib cap-strips. We’re fairly certain that when done, this will will be VERY strong.

Note that so far we’ve found NOTHING WRONG with this plane. The parts fit, the plane builds easy, and we already know she’s going to be a beauty!