While I was sheeting the fuselage, I also was working out the installation of my scale Tail wheel unit (custom made by Earl Aune). This included installing the new plywood former and reinforcement side doublers while still having access to the parts in between the pieces of sheeting. The sheeting also helps keep the fuselage structure rigid during the work as I remove it from the supports.

I start by simply laying the tailwheel unit over the plans and then I take measurements to zero in on the exact location for the new plywood former. 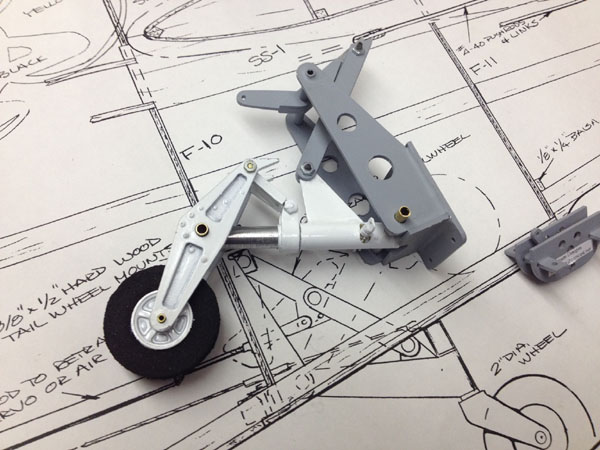 I also check the retracted position of the gear to see if there is any modifications needed. In this case with the wheel retracting in the scale “forward” direction, I do have to trim away some of the F-10 former. Much easier now than when the gear is installed. The Ziroli plans shows the standard Robart tailwheel unit which retracts aft similar to a P-51 Mustang.
The first step is to rough cut the former from 1/8-inch A/C birch plywood and to draw a centerline to keep the tail wheel centered when the unit is finally installed. I did much of the design work with my CAD program and used it to locate the attachment holes for the mounting bolts and blind nuts. 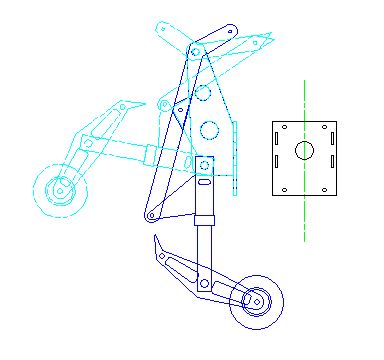 The drawing also shows the basic layout and parts of the scale tail wheel unit along with the mounting plate and the bolt hole locations.

I was also able to determine measurements for various parts. I originally was going to add a scale tail wheel well, but this interfered with the steering cables so I did away with the idea. This also saves some weight. 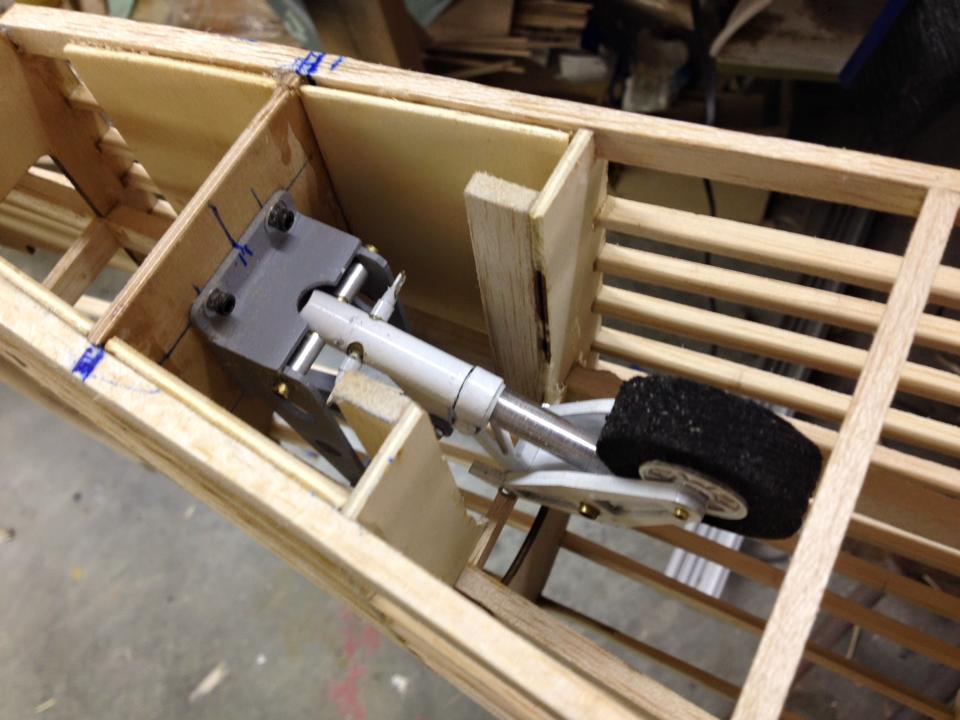 Here you see the unit bolted to the new former which has been glued in place along with lite-ply reinforcement doublers on either side of the former. Also you see that Former F-10 has been trimmed to allow the gear to swing forward when retracted. 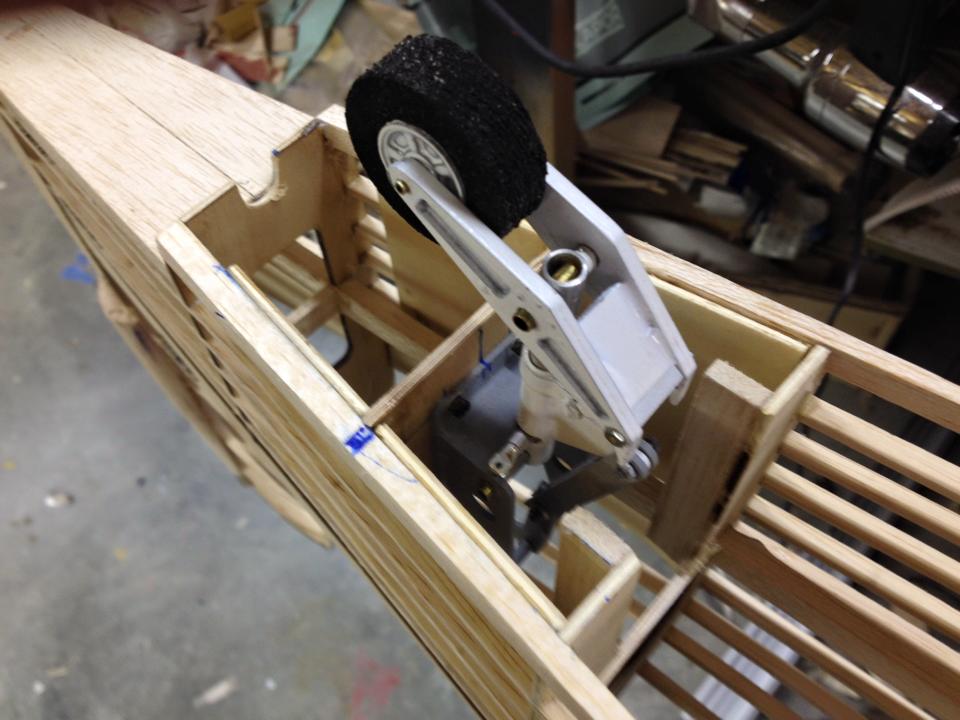 Here you see the Tail-hook mechanics are in place and the wheel-well framework has been installed along with the 1/32-inch belly sheeting to add some toughness to this section of the belly. 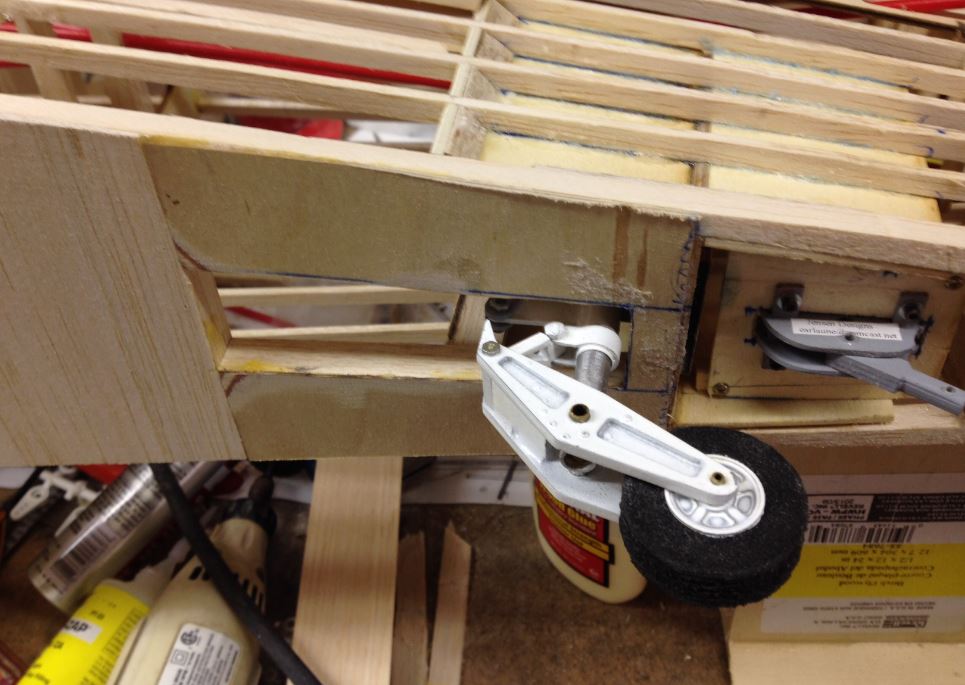 Once the mechanics are in place, you can install your servos in the area above the wing saddle and then run your pushrod and control linkages for the tail wheel driver lever. For the tail wheel steering, I used Sullivan Products Kevlar pull-pull cord and clevises. 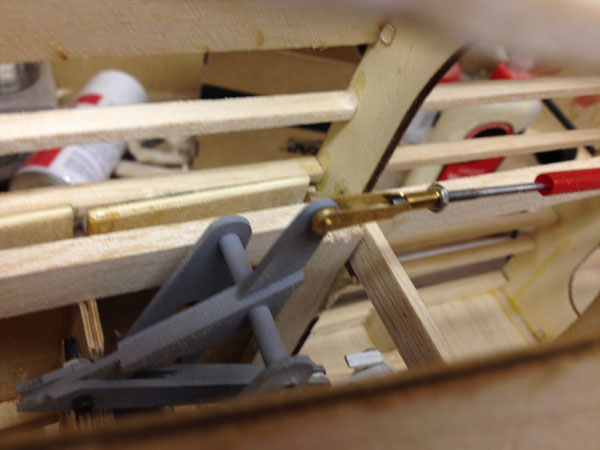 This is a view of the retraction arm linkage. To eliminate slop in the setup, supports will be added to the red pushrod guide tube. 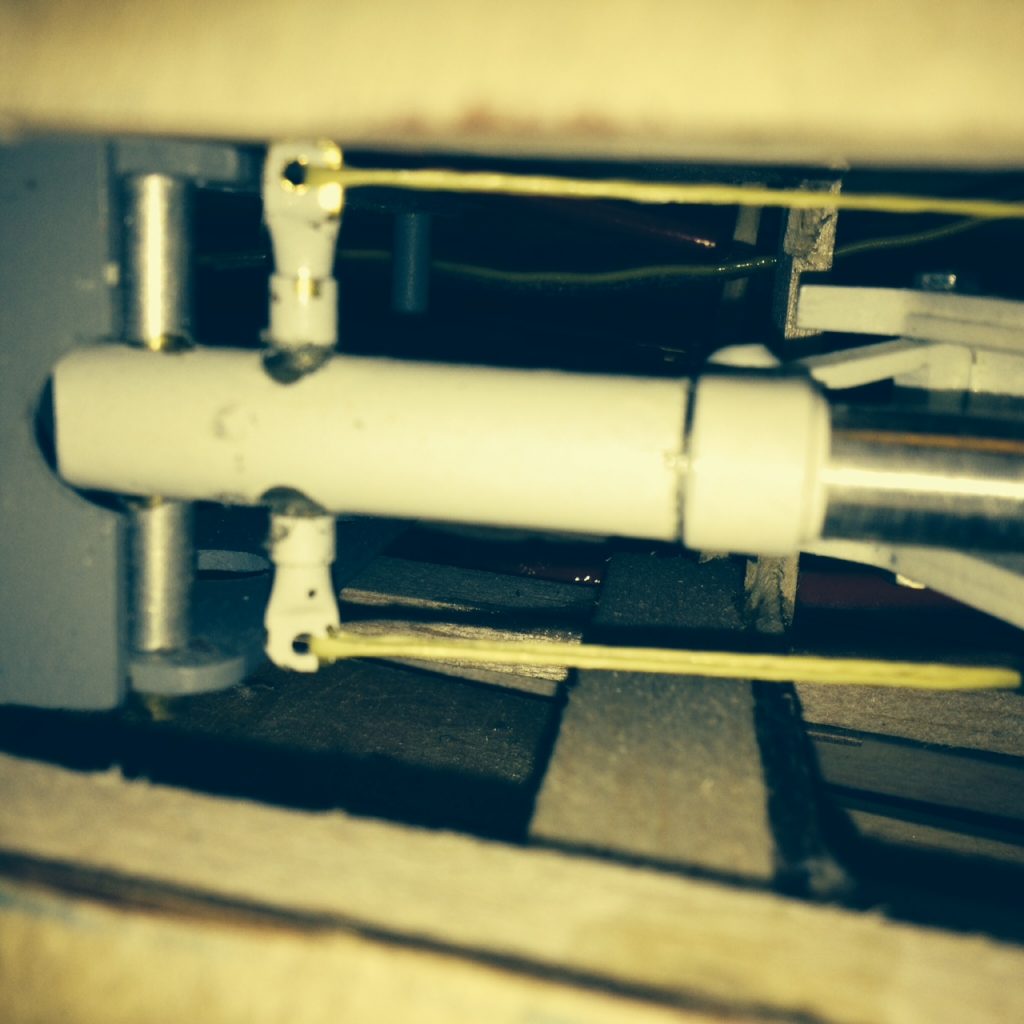 You can see here that I used large loops to connect the Sullivan Kevlar cords to the tiller arm ends. This places the knots away from any hardware items where they might be chaffed and worn because of vibration. 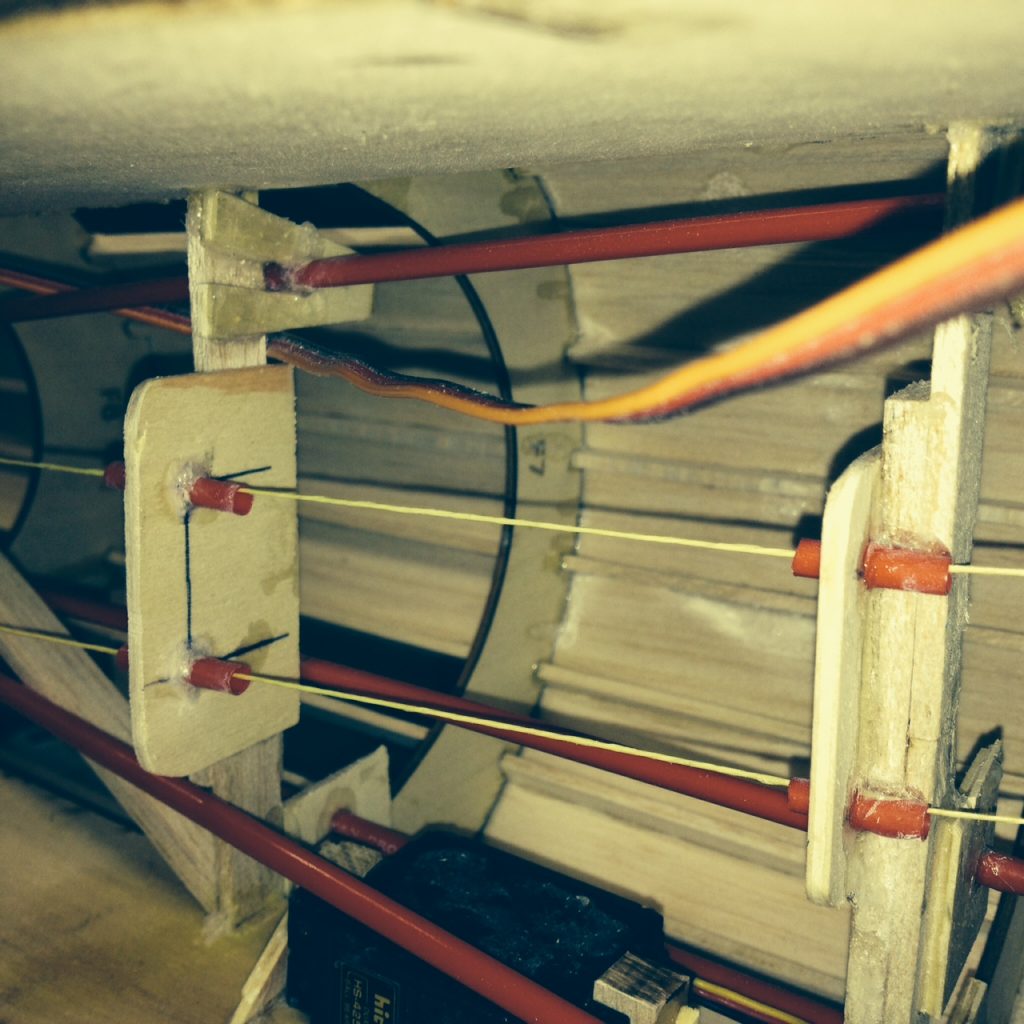 The cords travel through the center of the fuselage and to clear and chaffing areas in the structure I used a couple of guides (fairleads) to isolate them. The servo you see below the cords is the tail wheel retract servo. 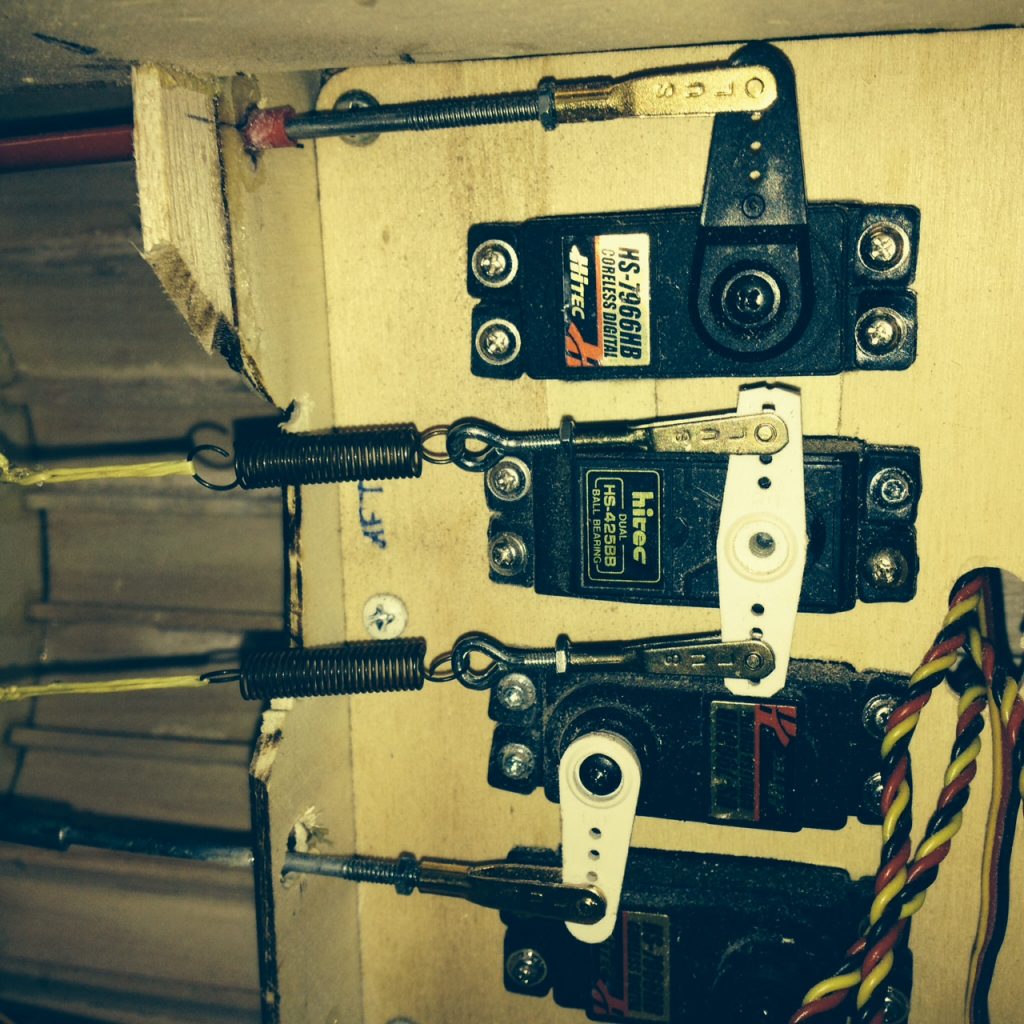 Here is my servos in their removable servo tray. The pull-pull cords are attached to a pair of tension springs that I attached between the cords and the pull-pull hardware connected to the the dual servo arm. This maintains tension on the cords so they don’t snag on the tail wheel while the gear is retracted. This does soften the steering a bit but helps prevent taxiing shock from being transmitted to the servo. As you can see, I am using heavy duty servos from HitecRCD.

Now that the servos and control linkages are in place, the rest of the fuselage sheeting can be applied.