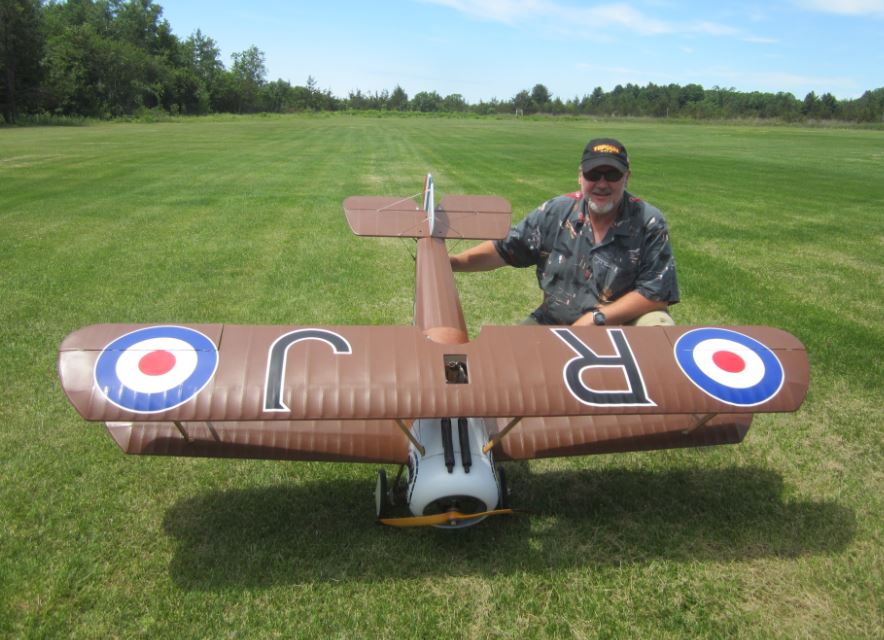 Well after a long and enjoyable build-along series, I finally got the Sopwith Camel test flown at the recent 40th Annual Father’s Day Fun Fly in Kingston, Ontario, Canada. We went early and test flew the plane before the competition started. I should have been less anxious to commit aviation and I think it was a good example of the Murphy’s Law principal. I had run the engine several times with the same throttle linkage and fuel tank on my test rig before installing the engine in the Camel. Well, after assembling the model, I cranked up the engine and the idle was way off. I could get the throttle down to about 2,500 rpm but no where near the 1,900 I got on the test stand. So all my friends help with a thousand suggestions and we get the needle valves readjusted and get the idle down a little bit more. But instead of just sitting there in a happy idle when the throttle trim lever is all the way back, it starves of fuel and dies. More fiddling and now looking back at it, the engine idle was sketchy at best…. Good enough I say and off we go. Balance is way nose heavy, a good thing I guess but the Camel tracks nice and straight and off it goes. It climbs nicely and not overly sensitive on any of the controls. My good friend and Ace test pilot is Dave Baron is at the controls and he says all things feel great. Maybe 10 to 15 % aileron to rudder mix, if I wanted too, but aileron differential and Expo are all more or less spot on. Then after a circuit of the field, Dave announces there no throttle control and the engine is wide open… So… for the next 25 minutes or so the Camel stays upwind and does about 800 figure-8s. No vibration issues, no flutter, nothing falls off, so in all, it was a good shakedown flight. The engine goes silent and the Camel comes down like an elevator. (Very nose heavy) and right at the end of the landing Dave says he’s out of up elevator, but as  you can see from the last image above, it lands without incident. Phewww! So, I am going to remove 6 or 7 ounces of lead from the firewall and work on the carburetor. I am going to check the fuel line for pin holes and open up the carb to see if we sucked in something to clog the fuel filter screen. If I have too, I will simply replace the carb, with a new one.

The cause of the 20 minute full power test flight was that the metal throttle arm fell off the carb’s throttle shaft. The screw was the only one I did not Locktite! All good in the end! So, through careful scientific testing, we have also figured out that a full tank of gas equals only 35% of the radio battery’s capacity! A good ratio I think.

I’ll be making test flight no. 2 shortly after removing some of the nose ballast and getting the engine adjustments taken care of.