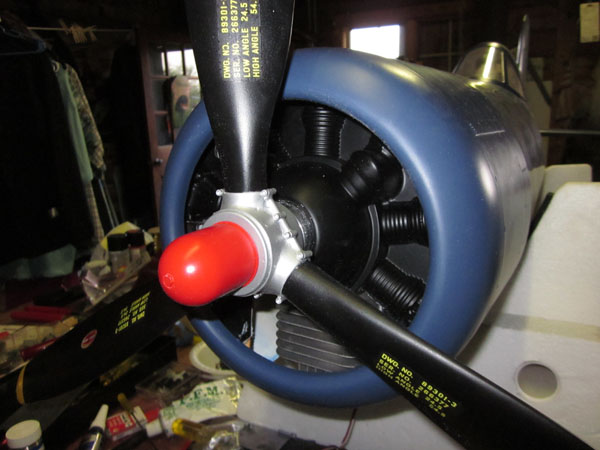 Now that the engine is all set, it is time to install the engine cowling. This takes a little more effort to get it right and there is a lot of assemble and removal, and repeat involved. But following the directions is definately a good thing here. 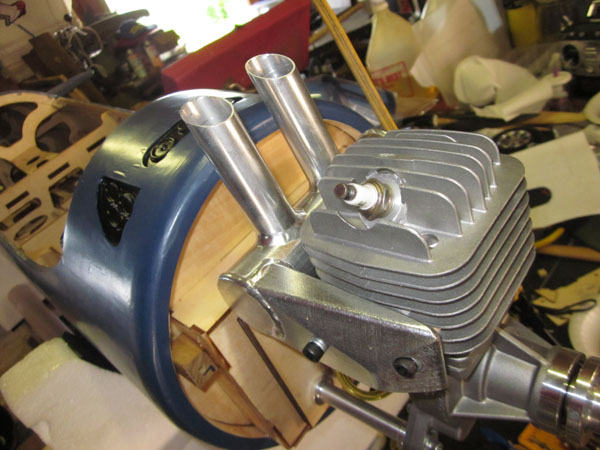 (Above) First thing, install the muffler. Instructions say to use this J-Tec Pitts Style silencer as it fits nicely and does not require modifying the firewall or fuselage in any way. 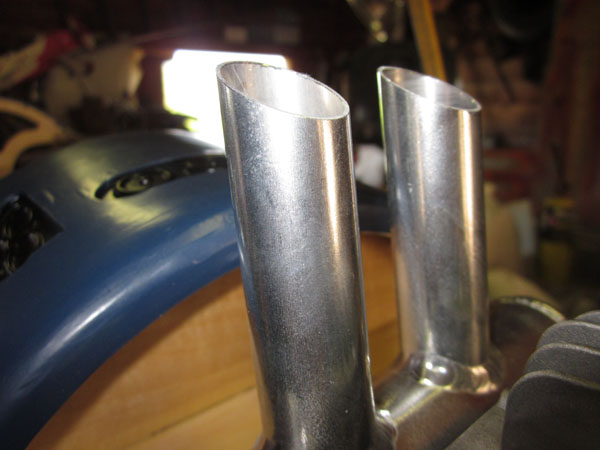 (Above) Now mark the exhaust pipes so they are about 1 inch below the bottom of the fuselage and cut them as shown here with a slight angle on the end. Sand and file smooth. 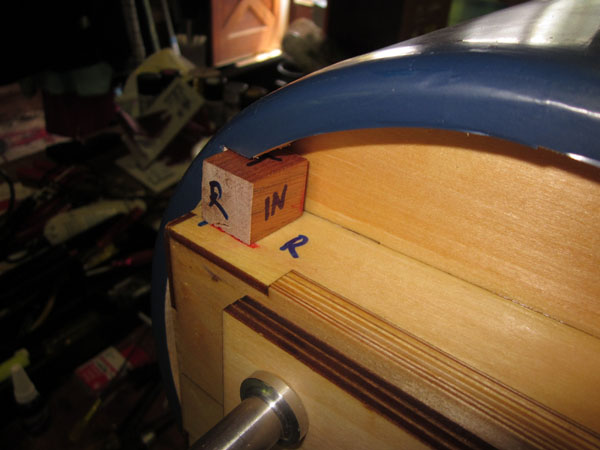 (Above) Flip the fuselage right-side up and position the top two cowl attachment blocks on top of the engine box structure. Mark them for left / right and top /front. This is so you don’t mix them up after drilling the bolt holes and blind nuts. 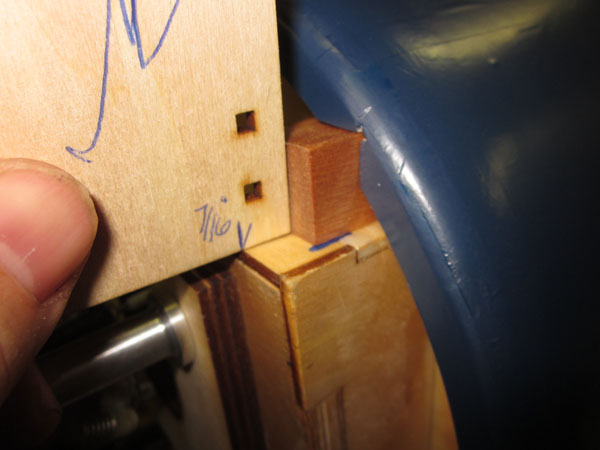 (Above) After cutting the fuselage ring to fit the blocks, I found it helpful to make a gauge to set the setback for the block’s location relative the the face of the firewall. But do not glue the blocks in place just yet. Place the aft cowl ring in place and center it on the fuselage. Again I found the gauge helpful to check the clearance around the fuselage. When the ring is centered, make the positions of the holes on the fronts of the blocks. 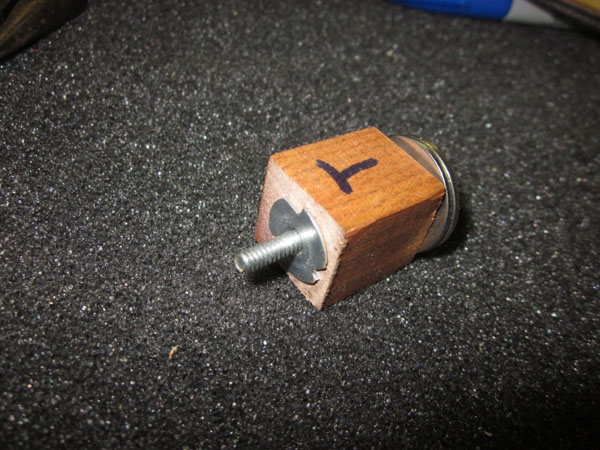 (Above) Place the blocks in a vice and use a drill press to drill the holes in the blocks. These need to be straight and square with the face of the blocks. Now use the bolts and some washers to pull the blink nuts into the block and use some Zap CA to glue them into place. 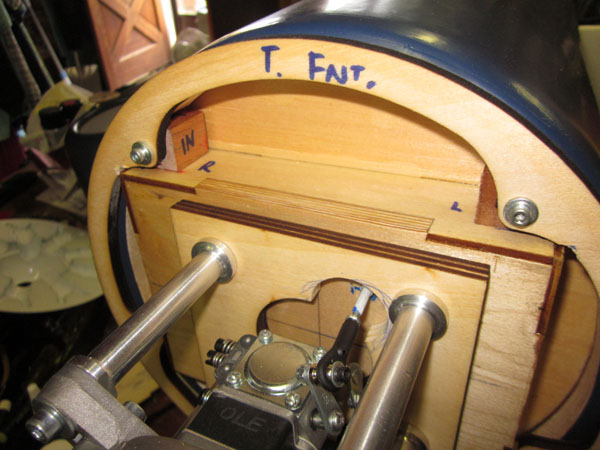 (Above) Attach the blocks to the cowl ring and set in place as shown. No, don’t glue anything into place just yet. 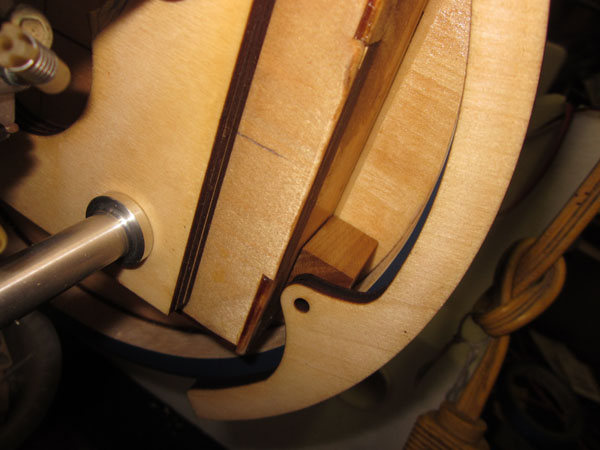 (Above) Now do the same thing for the bottom two side blocks. These rest between the fuselage ring and the engine box. No trimming of the fuselage required. 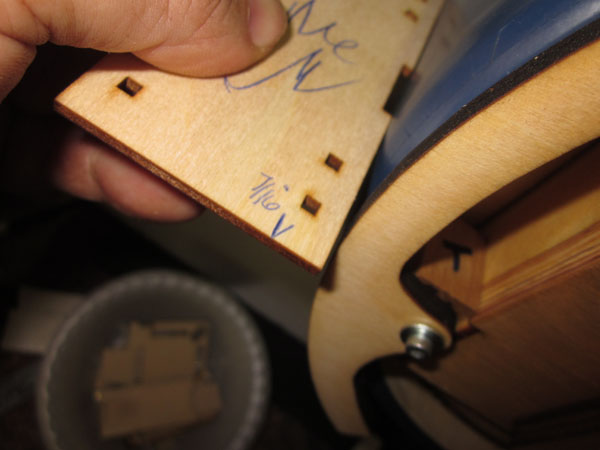 (Above) Bolt the bottom blocks to the ring and check the fit and alignment of everything again. When all is properly set, remove and use 30-minute Zap Z-Poxy to glue the blocks in place. Use a gauge again to check (and adjust if needed) the cowl ring’s position. It should be centered on the fuselage and have the same (1/16-inch) spacing all around. 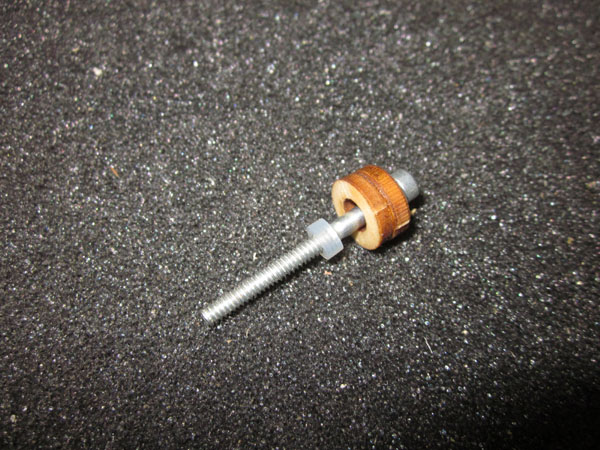 (Above) After the adhesive sets up, remove the cowl ring bolts one at a time and install the plywood retainer rings and the small section of fuel tubing and reinstall the bolt while gluing the rings in place around the cowl ring.

You are now ready to install the engine cowl and glue it to the cowl ring. 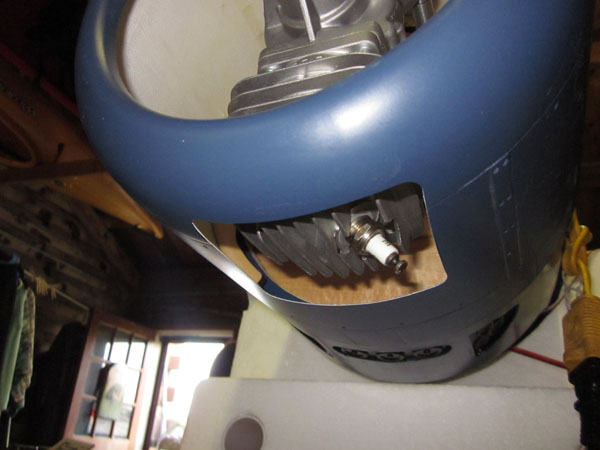 (Above) Remove the muffler and slip the cowl over the engine as far as you can so you can make the position of the cylinder head inside the cowl. Make sure you position the cowl properly before marking where to cut the opening. Use a Dremel Moto-Tool and a grinding bit to open up the corners of the opening, then switch to a straight cut-off disc to make the side cuts of the square opening. Sand smooth and clean away the dust. 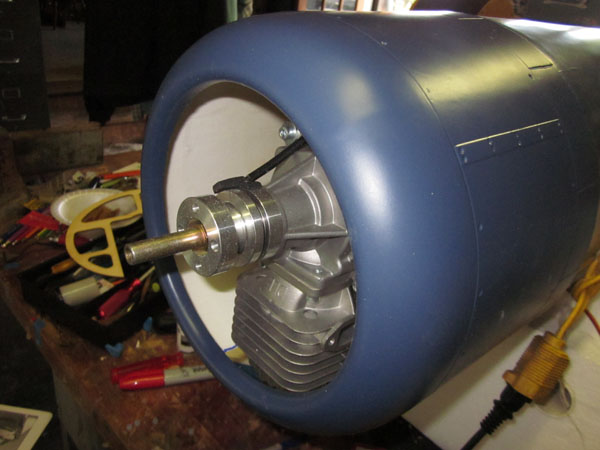 (Above) Slip the cowl back into position and when the engine shaft is centered in the cowl opening,  tack glue the cowl ring to the inside of the engine cowl. Important note: Be sure to clean the inner surface of the cowling before gluing the ring into place. Also, be sure to set the cowl position to maintain about A 3/8-inch spacing aft of the cowl ring so you provide exit area for airflow through the cowl. This takes some time so check and recheck the cowl before gluing. Look at it from the side to maintain an even exit space all around the fuselage and the aft edge of the engine cowl.

Once the glue has dried, remove the cowl and reapply glue to the whole cowl ring and the cowling. After it has dried again, apply a thick bead of RTV adhesive and form a big fillet with your fingertip around the inside joint. Do not get glue on the back side of the ring where it mates up against the four attachment blocks. 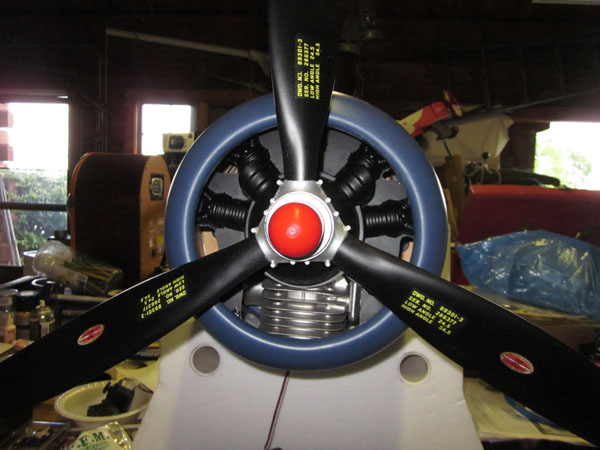 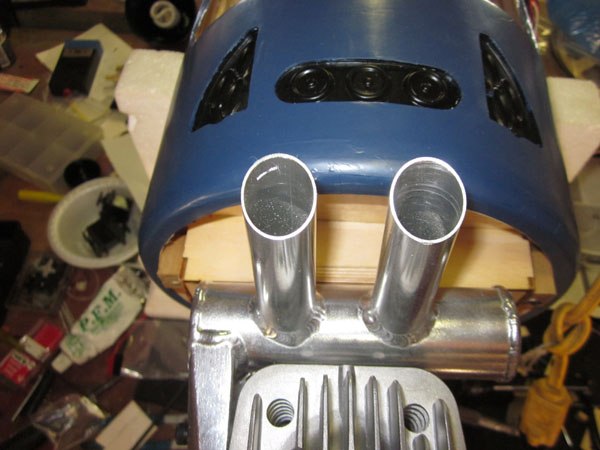 (Above) Turn the fuselage up-side down and remove the engine cowl. Re-install the muffler. 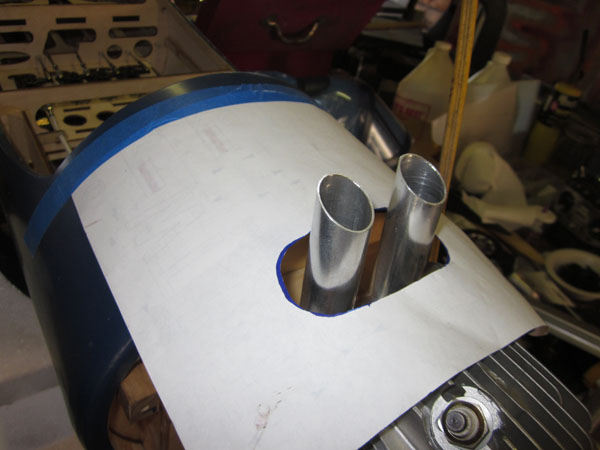 (Above) Cut an opening that will fit around the exhaust pipes in a piece of scrap paper and tape the back edge of the paper template to the bottom of the fuselage. Make sure the exhaust pipes are centered in the opening. 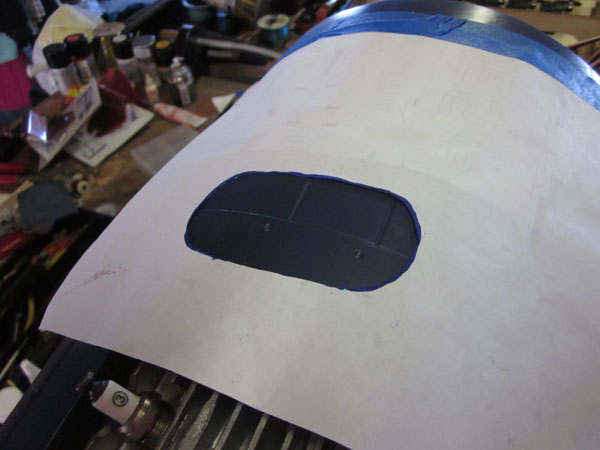 (Above) Fold the paper back enough to remove the muffler and re-install the engine cowling. With the cowl bolted in place, fold the paper back into place over the cowling to show where to cut the exhaust opening. 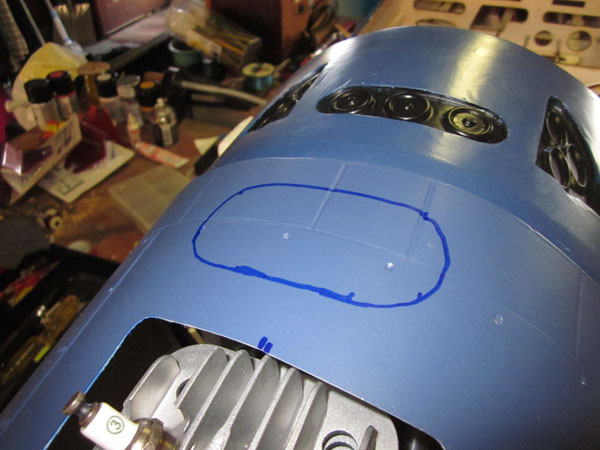 (Above) Use a marker and trace the opening and then remove the paper template. Here you see the marked area of the cowling to be removed. 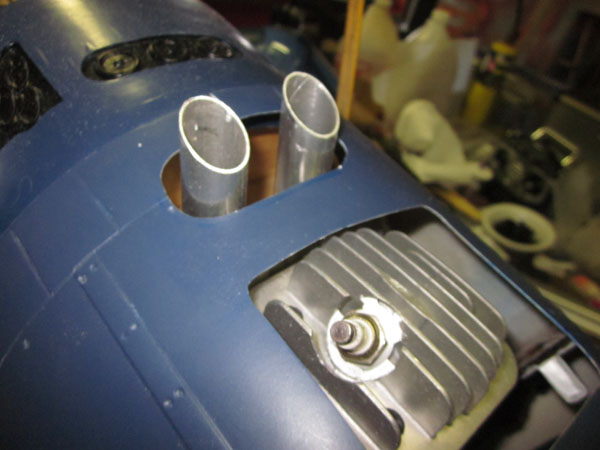 (Above) Remove the engine cowl, and open up the exhaust opening like you did for the engine head and use sandpaper to smooth all the edges. Re-install the muffler and then slip the cowling over the engine and bolt it into place. Here you see the finished cowl treatment. It is nice and neat with an even spacing all around the exhaust pipes. 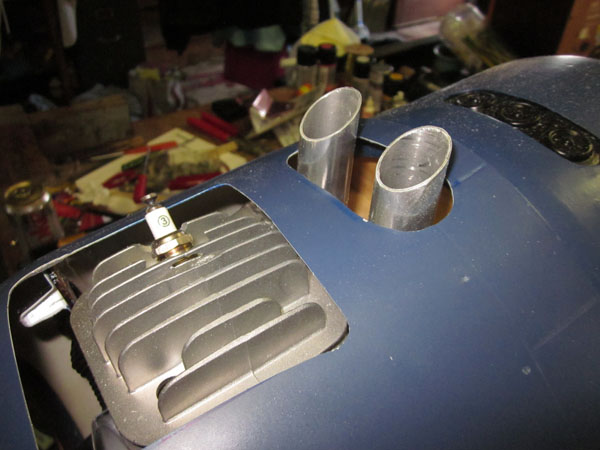 (Above) Here’s another note. If you have difficulty slipping the cowl into place over the exhaust pipes, you can either cut them shorter, or do as I did  and split the aft section of the cowling behind the pipes so you can lift then around the pipes. To secure the aft edge of the cowling, I use some heavy duty clear packing tape. 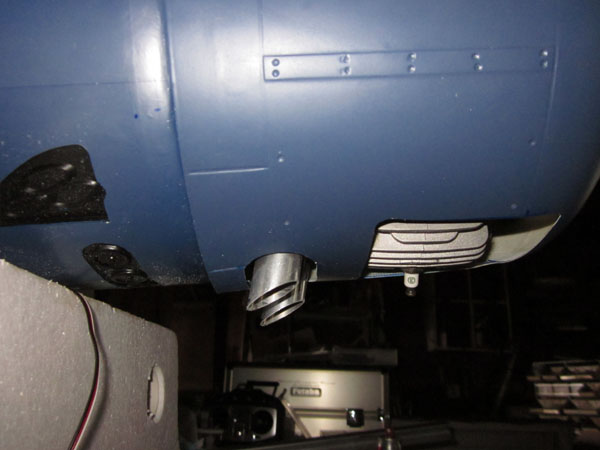 (Above) You could also simply cut away the portion of the engine cowling behind the exhaust pipes, but I left it in place for a better scale appearance. 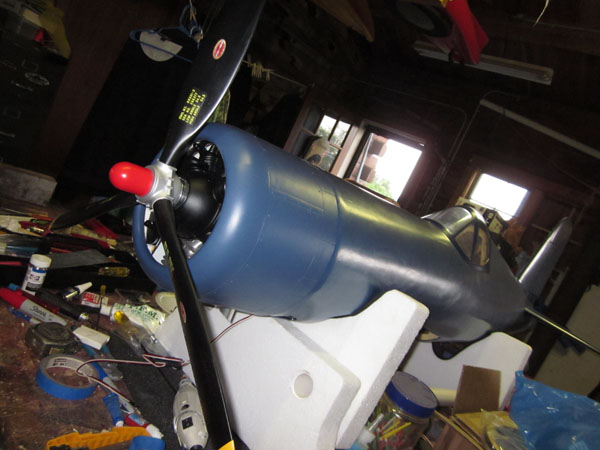 Here’s the finished engine cowling installation. Adding the static scale Hamilton Standard 3-blade propeller made from a Nick Ziroli Plans kit, really  jazzes up this ARF. I can’t wit to add all the other scale details.

That’s it for now. Stay tuned as I will be adding the Electronic Ignition system, fuel system and finalizing the radio installation soon!