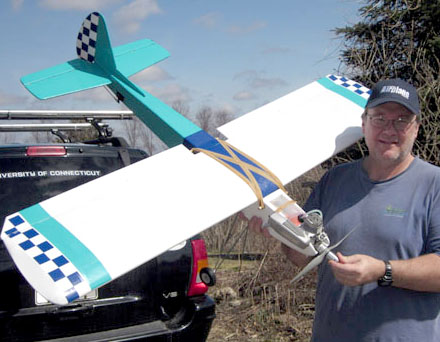 Well, we finally did it! We’ve completed the building and workshop phase of the Florio Flyer 60 Build-along. From opening the box till the final covering piece was ironed into place too from February 1, to March 10. Not too bad for a kit built airlplane! I know some flying buddies that take a month to build an ARF! I even took a weekend off to attend the WRAM Show! :^)

Each step of the build I highlighted has demonstrated some basic building and modeling tasks or techniques. We now finish up this online series with the task of covering. You’ll need the plastic iron-on covering material, MonoKote from Great Planes  and Ultracoat from Horizon Hobby are the two most popular brands and for this build, I’ve used Ultracoat. Ultracoat is also available under the brand name Oracover. You’ll also need a covering iron, a sharp hobby knife and lots of replacement blades and a long straight edge, 18- and 36 inches work best. Also needed are some acetone solvent for cleaning off smears of colored adhesive that sometime sticks to the covering iron. Paper towels and a cutting board also come in handy. 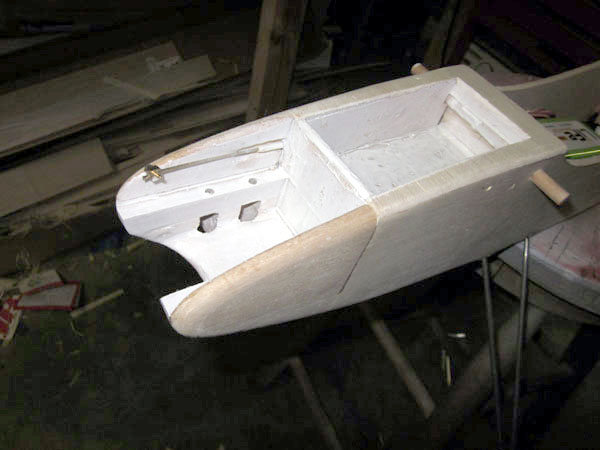 To start, I like to paint the engine- and fuel tank-compartments a matching color so the covering job looks complete. Mask off the bare wood that will be covered with the iron-on plastic. This will produce a nice professional appearance by eliminating any natural wood surfaces showing and further helps fuel-proof y0ur model. 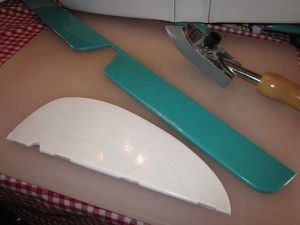 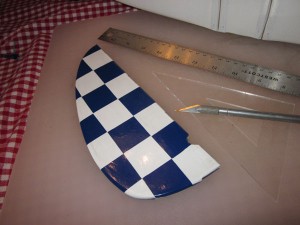 I like to get into the mood for covering a model by doing the control surfaces first. They are small and the covering job goes quickly for each surface like the rudder, elevator and ailerons. Here you see the two base colors and the dark blue trim color I used to give the rudder its checker-board finish. But to get a good covering job, there is a secret. 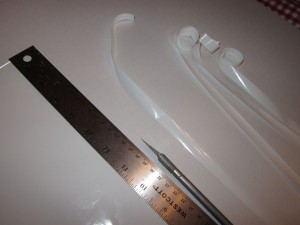 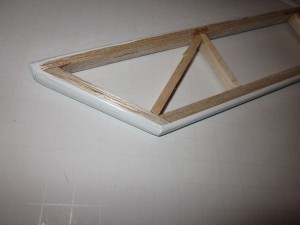 Before actually covering the control surface, cut your covering material into long stripes and iron it onto the outer edges of the structure. Wrinkles in covering jobs come from trying the shrink the material into place. This is the first mistake and once the wrinkles are there, they are all but impossible to take out. By applying the edges strips like shown about, you are stretching it into place. Iron it along its center and then work the iron down to the outer edges.Use a sharp knife and cut any buckles in the strip so it can lay cleanly over itself. 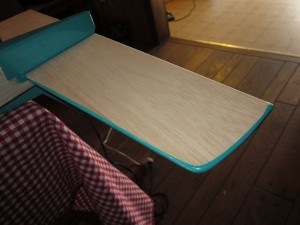 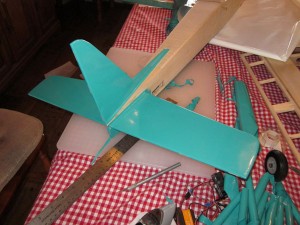 Do the same for the stabilizer and vertical fin. As you can see, there are no wrinkles and all the surfaces and nice and smooth. 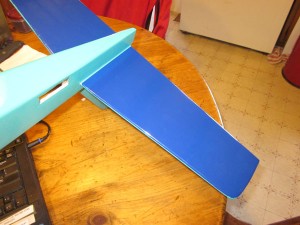 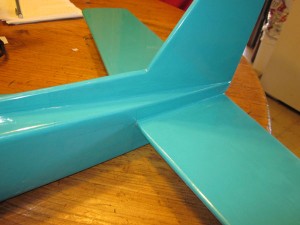 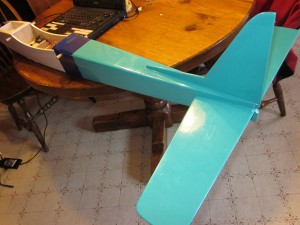 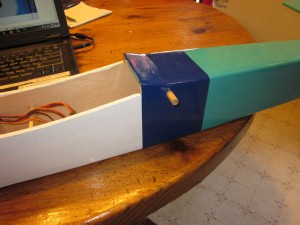 Here’s another tip. When you cover the fuselage, start at the tail and work your way forward to the nose. This way, your trim seams between colors face aft away from the airstream and the fuel residue coming from the exhaust. Also, you start covering on the bottom, then do the two sides and finally you cover the top. Again to keep the seams facing aft and down. 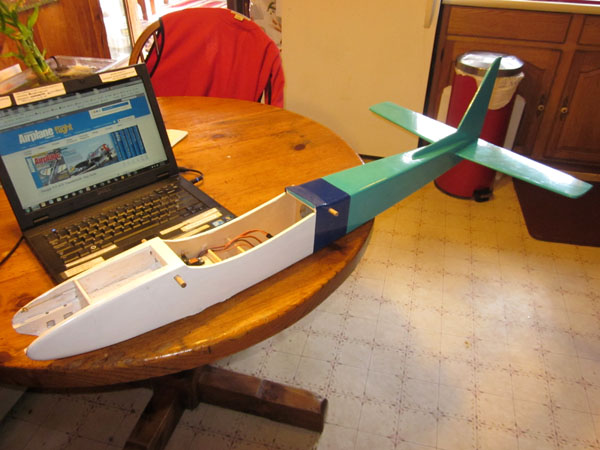 Here you see the completed fuselage. Where the wing hold-down dowels protrude from the fuselage I cut a star pattern with my hobby knife and push the covering down over the dowel for a tight fit. It takes time but taking time with the postioning of your covering material helps minimize effort and areas where wrinkles pop up. 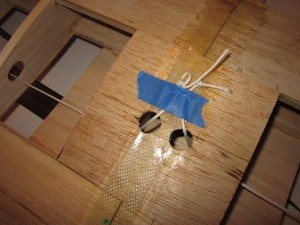 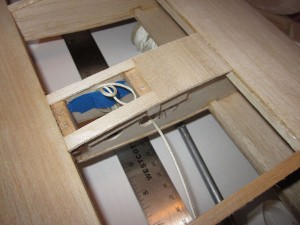 Before covering the wing, install a string as shown here and tape the ends in place so when the wing is completely sealed, you can tied the string to the aileron servo leads and pull them into place. Forgetting to do this little trick can runi your whole day. 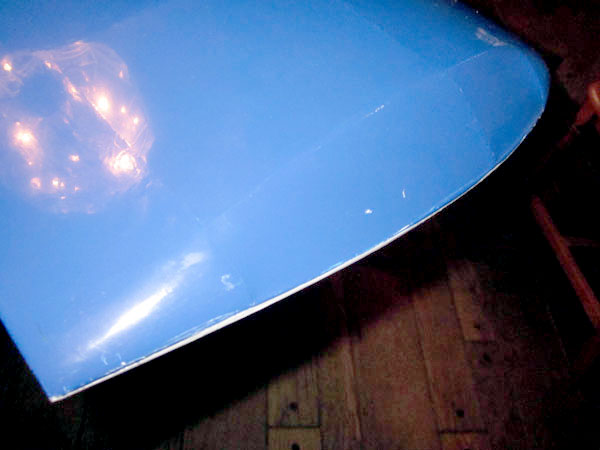 Being built up, there is a lot of weight saving and just a bit more work to produce a wrinkle free covering job around the wingtips. The trick is to start with a fair amount of extra material (2 to 3 inches) going past the end of the wing tip so you can really grab it and pull as you heat the material. Start at the center and work out to the trailing and leading edges. Pull and tack, pull and tack until all the wrinkles (or most of them) are removed. (A friend with a spare hand doesn’t hurt here either!) Don’t heat this area to remove all the slack just yet. You want to cover the other side of the wing and wing tip and really seal the seam along the outside edge of the tip. If you don’t doe this first, the heat will cause the material to come loose from the outer edge and it will be impossible to remove the slack and wrinkles. 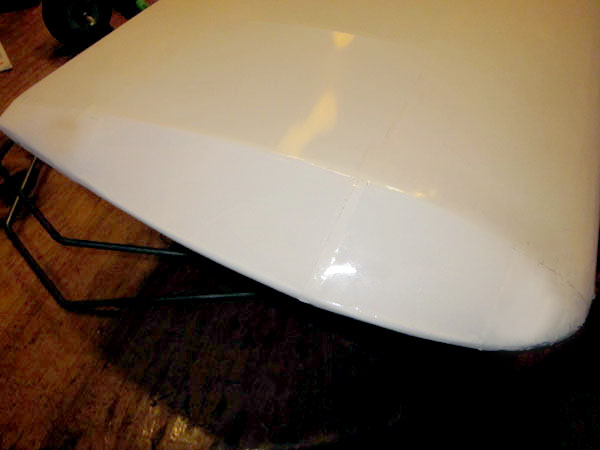 Here’s the top surface of the wing tip. Again, all the winkles have been removed and the edges are all sealed down tight against the wood. The reason for the white top surface and the dark blue bottom surface of the wing it is maximize the ability to see what theairplane is doing while it is in the air. White is bright and that means the top of the plane. The blue is dark like a shadow and it is the bottom. So from a distance you can instantly see if you are coming or going, upside-down or right side up. Orientation is key to staying in control. 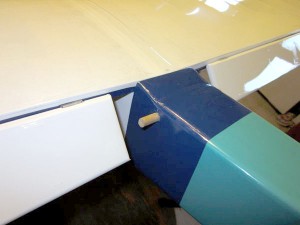 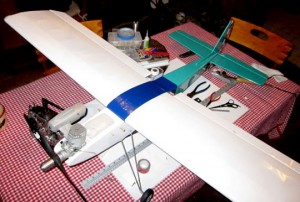 Here you see the the top of the wing center section with the two top pieces of covering over lapped above the fiberglass tape and resin reinforcing the wing’s dihedral joint. The white semi translicent and so some of the underlying wood grain and fiberglass tape can be seen through the material. To give the wing a better appearance I covered the center top with some dark blue trim. This trim also is used as a guide to center the wing over the fuselage when you attach it in place with the rubberbands. Just line up the edges of the blue section with the edges of the fuselage and the wing is centered. 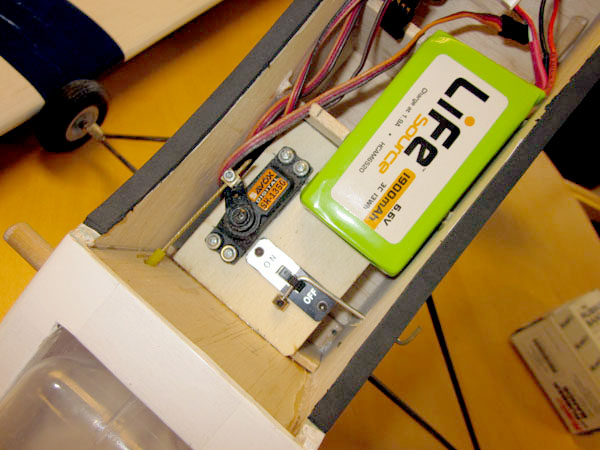 To attach the battery pack securely, I used three layers of foam double-sided tape and pressed it firmly into place on top of the plywood tray. Also the battery is placed so it does not touch the inner surface of the fuselage side. Note also the push/pull wire attached to the internally mounted on/off radio swithc. This allows you to use the switch without cutting an opening in the side which can also let engine residue get into the switch. A small lock collar secures the wire which is slide into a hole drilled into the switch toggle. 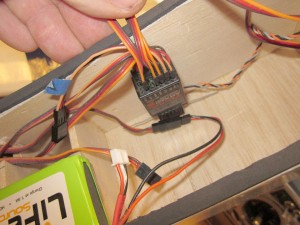 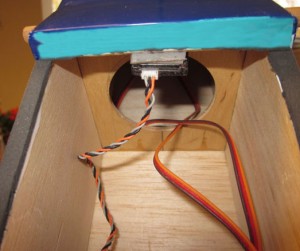 Three layers of foam double-sided tape are also used to attach the Spektrum receiver and secondary receiver into place. The smaller receiver is affixed under the aft deck just behind the wing saddle opening. It’s out of the way and positioned 90 degrees to the main receiver. 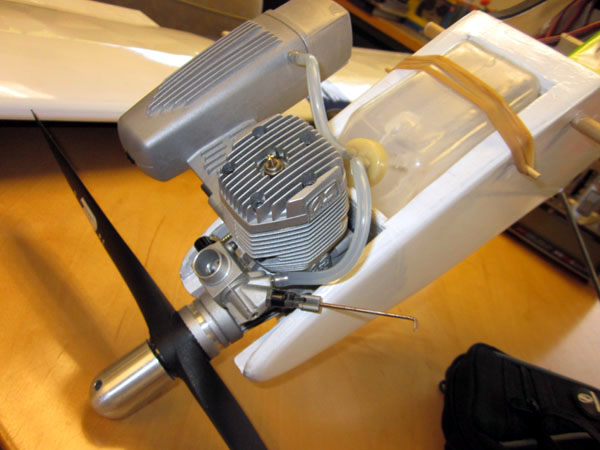 Here the engine, fuel tank and main landing gear have all been installed. You can see how clean the painted engine compartment looks. If you like you can apply a little thin CA Zap glue along the edges between the painted surfaces and the covering material. 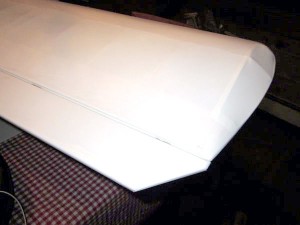 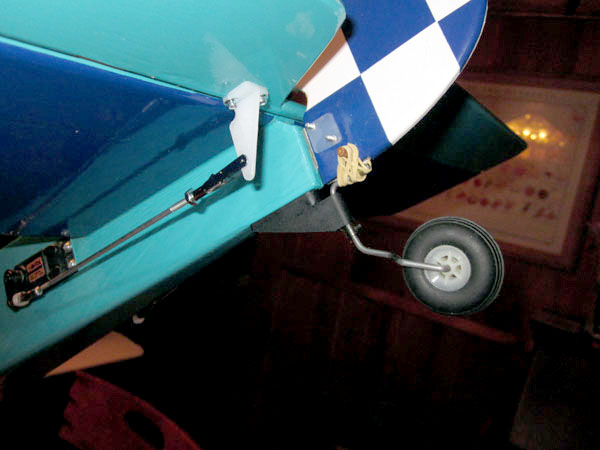 The last step s to install all the control horns and attach the various control linkages. Also here I have screwed the tailwheel assembly into place. A small dowel installed through the bottom of the rudder is used to wrap small rubberbands around the tailwheel’s tiller. This seperates the shocks and side forces and prevents it from being transfered to the rudder which over time will cause the hinges to wear out! All that’s left is adding some Decals and some personal touches.

That’s it! The Florio Flyer 60 fun fly airplane is complete and ready for radio programming and test flying! Stay tuned for more helpful hints from the pit area!

Here are the link for other MAN  Workshop Build-along pages: https://www.modelairplanenews.com/?s=build+along

You see also see my video summary as well as other exclusive online content by subscribing to our “Members Only” site. Just go to www.airagestore.com and click “Become a Member”