Following his very successful Sopwith Camel from 2016, MAN editor Gerry Yarrish has been tinkering away on his new scratch built, CAD designed Nieuport 24 French biplane fighter. With laser cut parts, the 27.5% scale project is now in its 15th month though the summer was more about flying season and less time was spent in the shop. Here are some pics to show where the Nieuport is. Gerry plans to test fly his WW I Flyboy fighter in the spring. 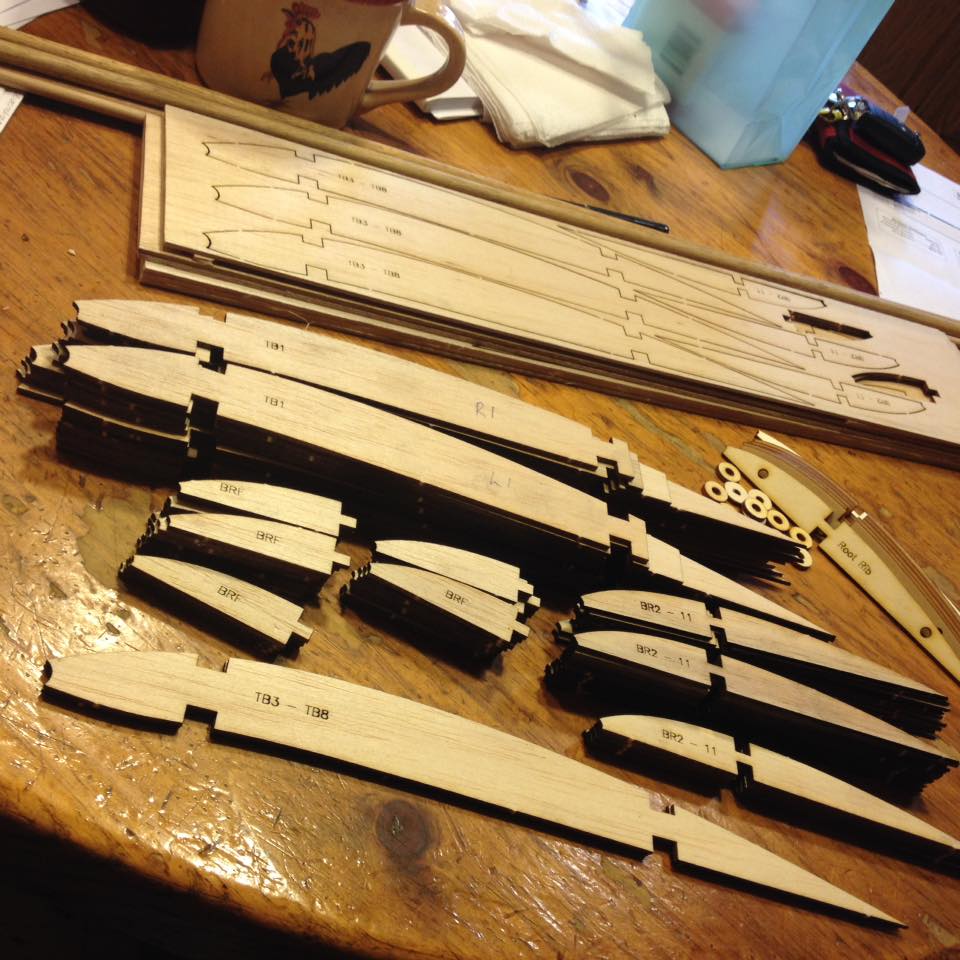 Gerry cut all the parts on his home laser cutter. He used quality balsa from Balsa USA. Here are all the wing ribs. 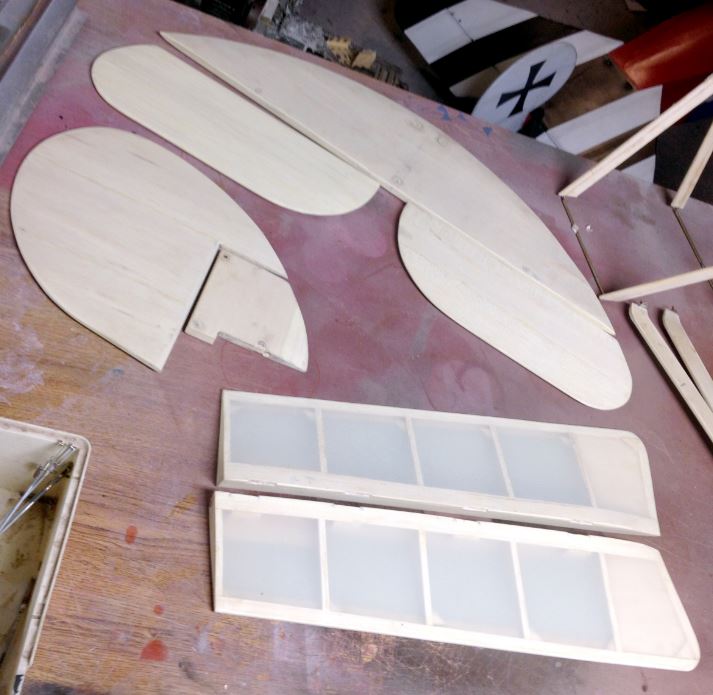 Covering started with the control surfaces. Everything is covered with Scale Stits from F&M Enterprises. 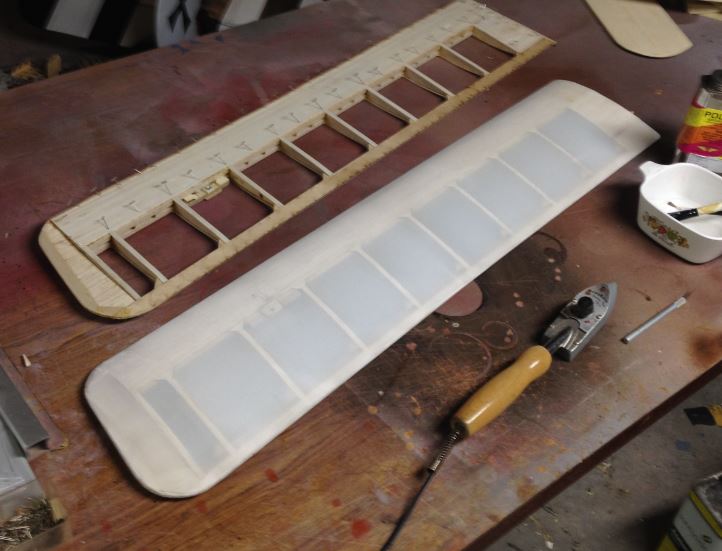 After the tail surfaces, the bottom wings were covered. 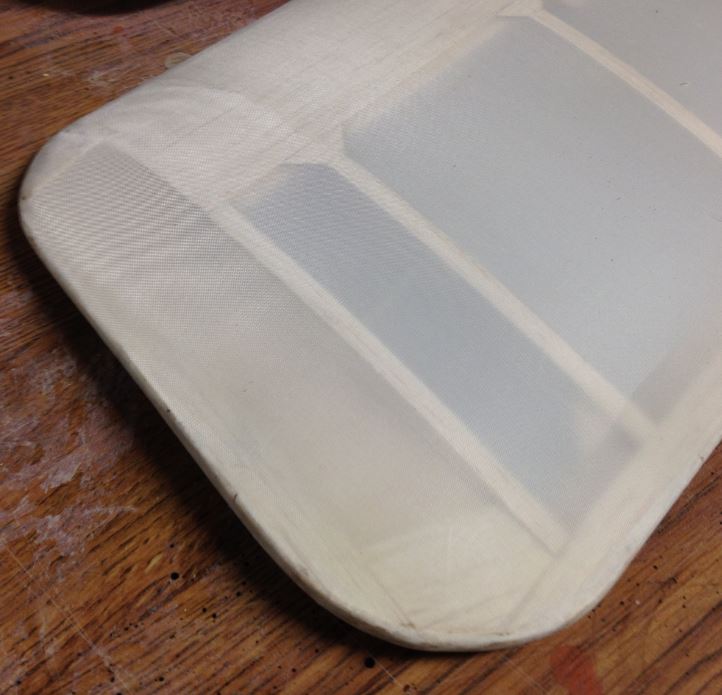 As can be seen, the wing tips were built with a center core sheet with filler strips added top and bottom. The tip structure is laminated and has a curved undercamber. 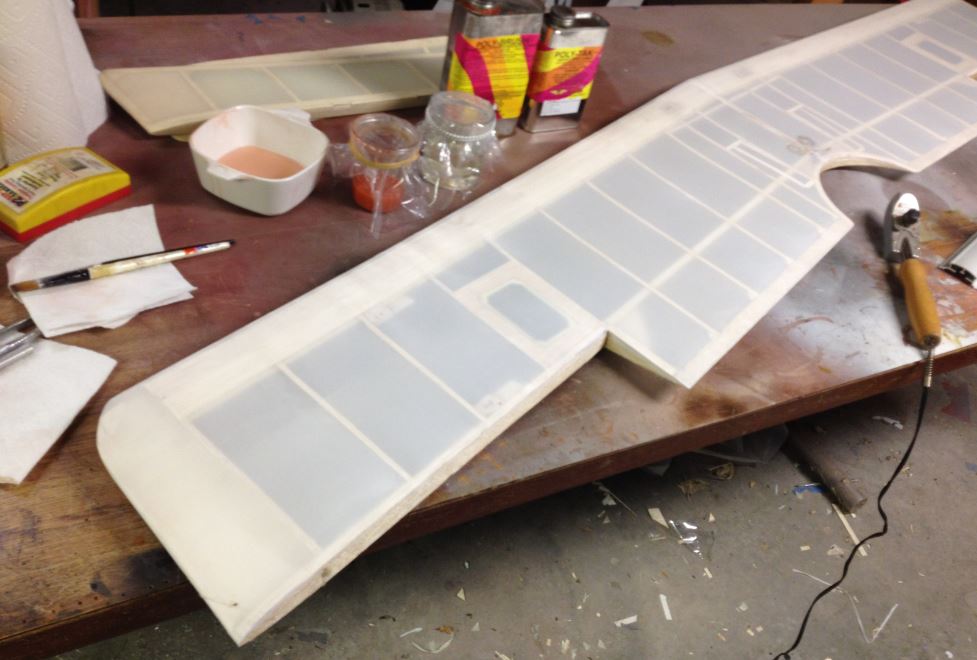 Next comes the one-piece top wing. The bottom was covered first. Because of the undercamber, the covering is glued to each rib with the PolyTak adhesive. 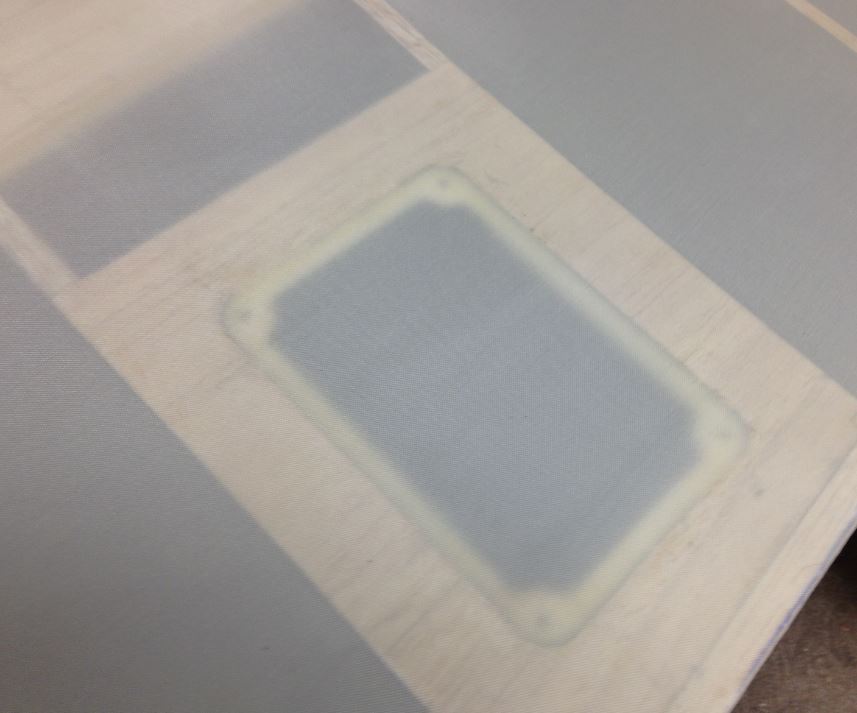 For the aileron hatch, additional glue was added around the edges so the fabric would stay put when cut open. 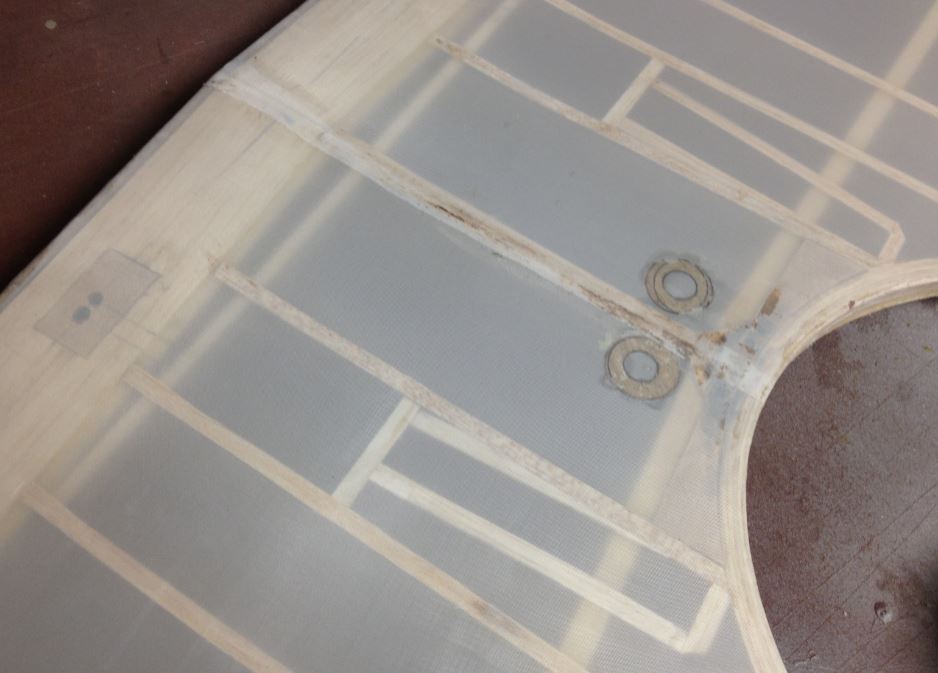 At the center of the wing, two round hard-point plywood discs were glued to the inside of the fabric with thin Zap. These will be cut open for the aileron servo leads to exit from. 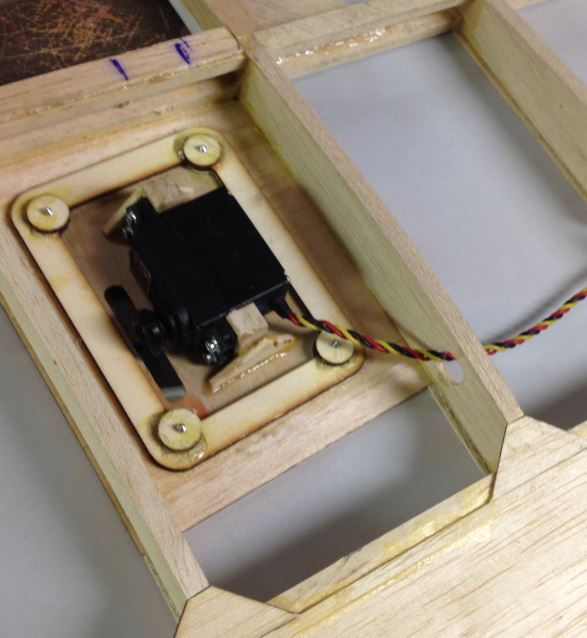 Here is the aileron servo is in place and the hatch cover screwed into place. 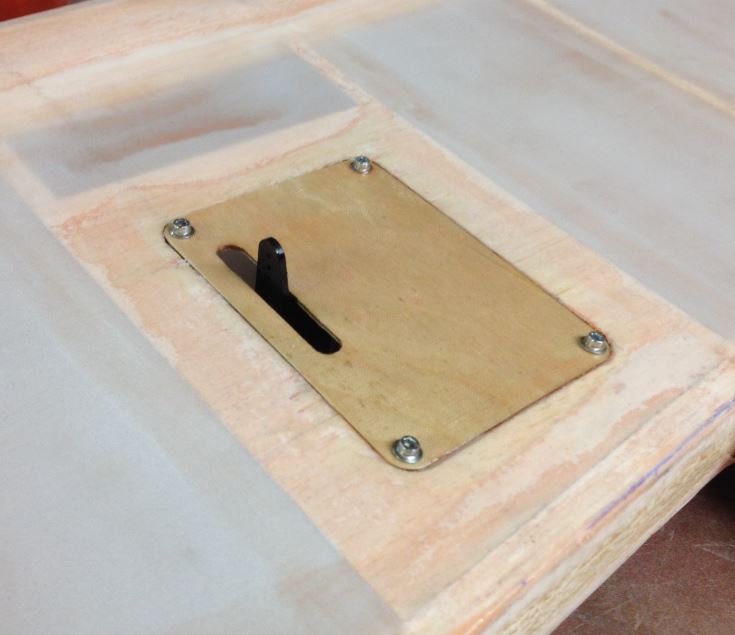 Here’s the outer side of the hatch installation. Hitec Servos are used through out. 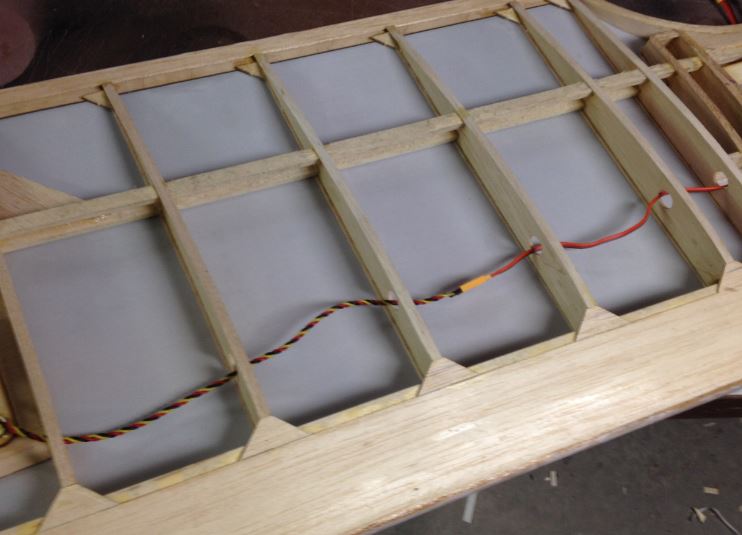 Before the top of the wing is covered, the servo leads are inserted through each rib. The connectors are also taped together for security. 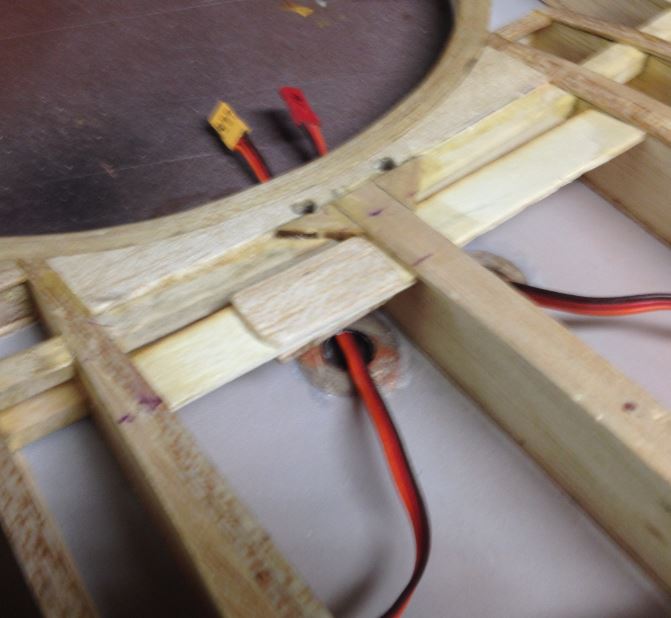 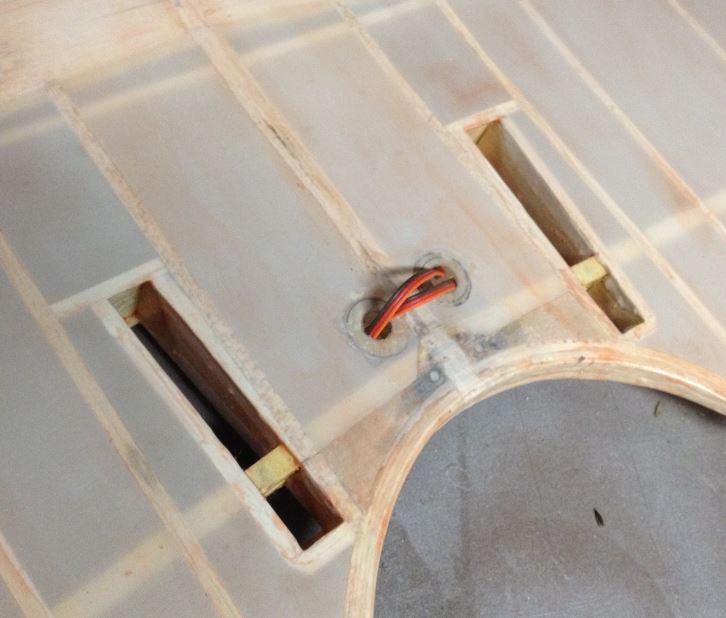 Here the bottom of the wing has been covered and the aileron servo leads are inserted as shown until the wing is painted. 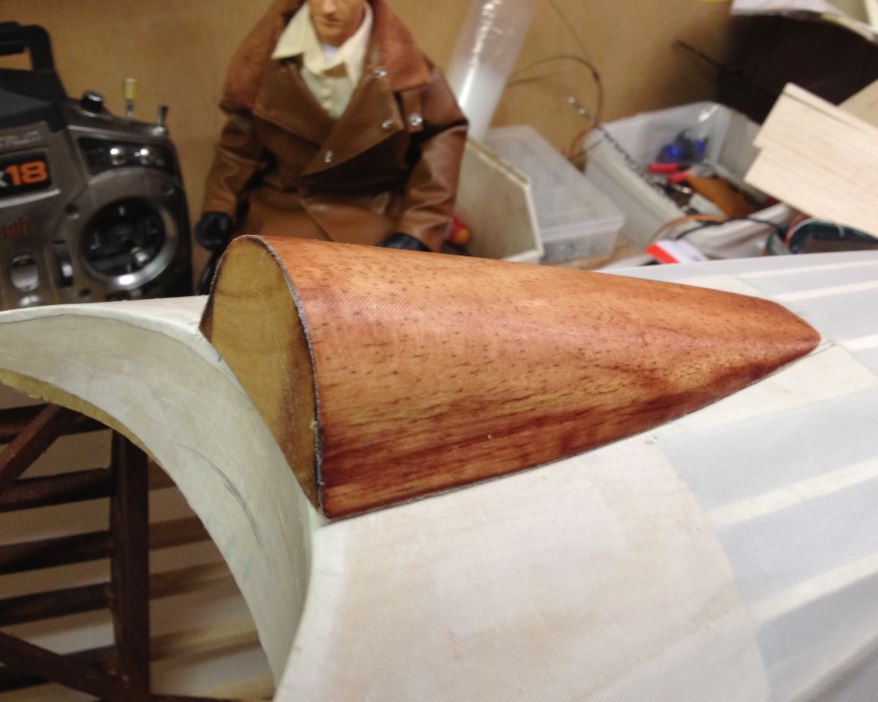 The fuselage is covered next. Shown here is the scale headrest. Made from a block of balsa, it is covered with fiberglass cloth and Pacer Finishing Resin. 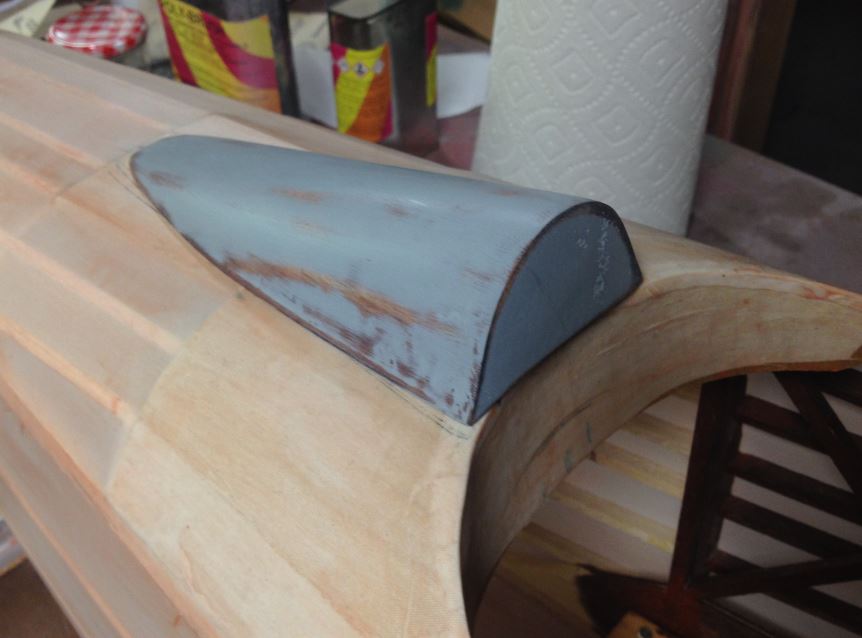 Two coats of resin and sanding, make it ready for two coats of spray on primers. 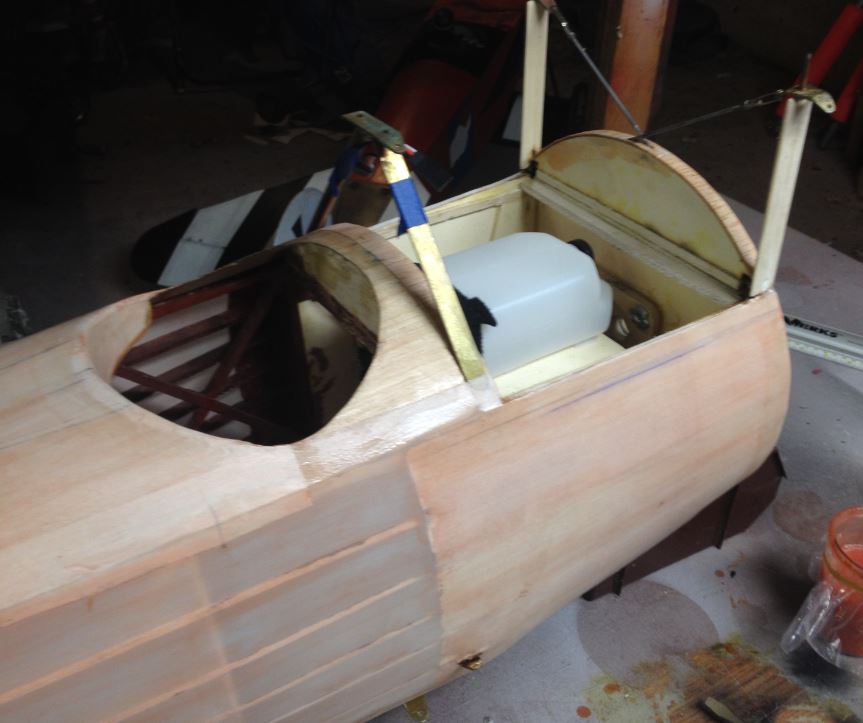 Here you see the main hatch opening between the cabane struts. 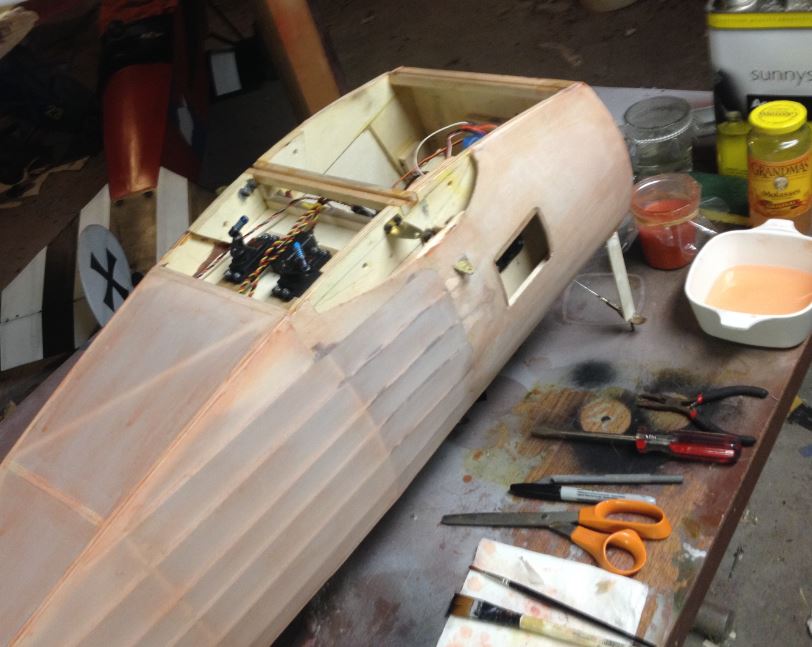 On the underside, there will be two fiberglass sheet panels to cover up the radio gear The hatch opening on the side is for the radio and engine ignition switches. A hinged plywood cover panel will be installed later. This is a scale panel on the full size aircraft. 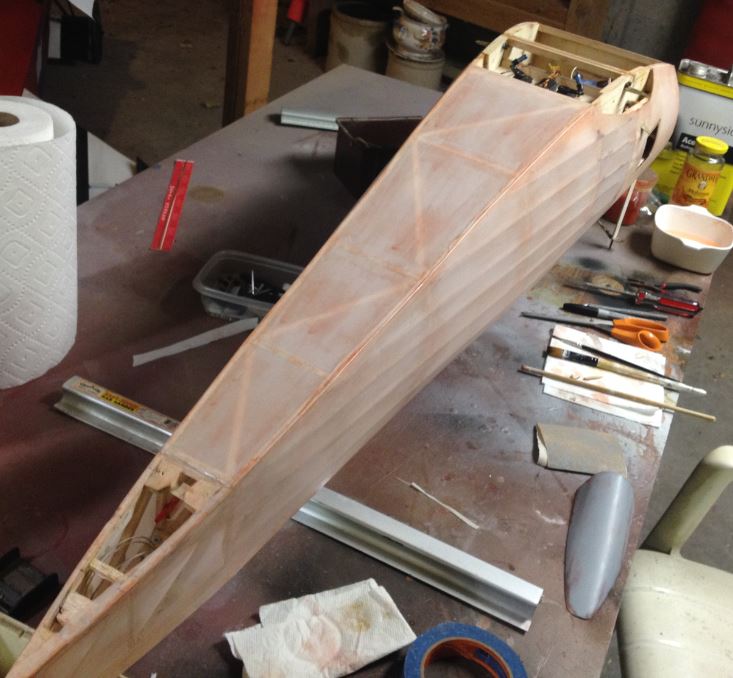 There is also a hatch at the tail of the fuselage. This allows access to the control runs and the rudder, pull-pull cables which will all remain covered until after the fuselage is painted. The hatch cover is also the base for the tail skid structure. 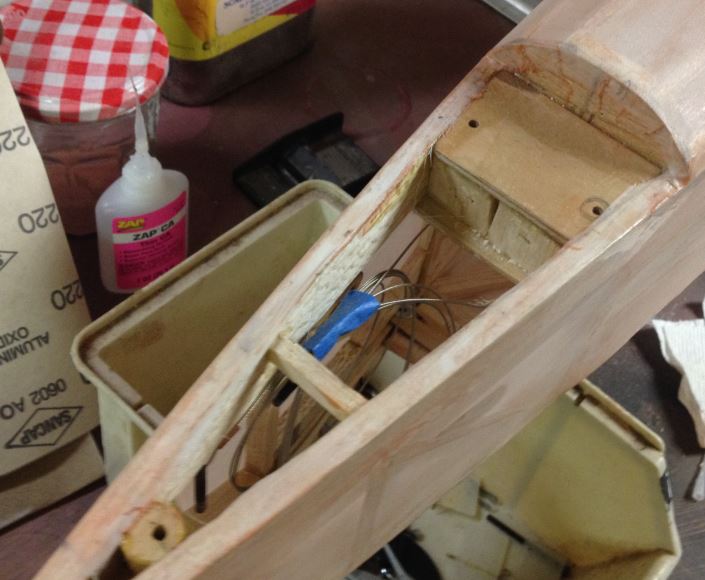 The horizontal stabilizer is removable and this also giver access to the interior of the tail section. 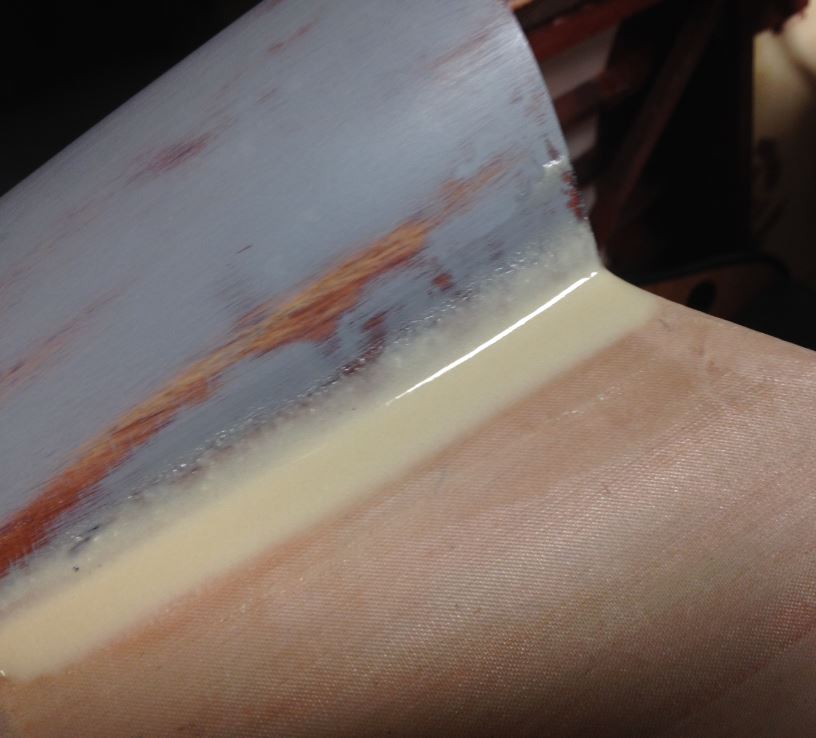 After the headrest is is glued in place, the base fillet was sculpted using microballoons and finishing resin. 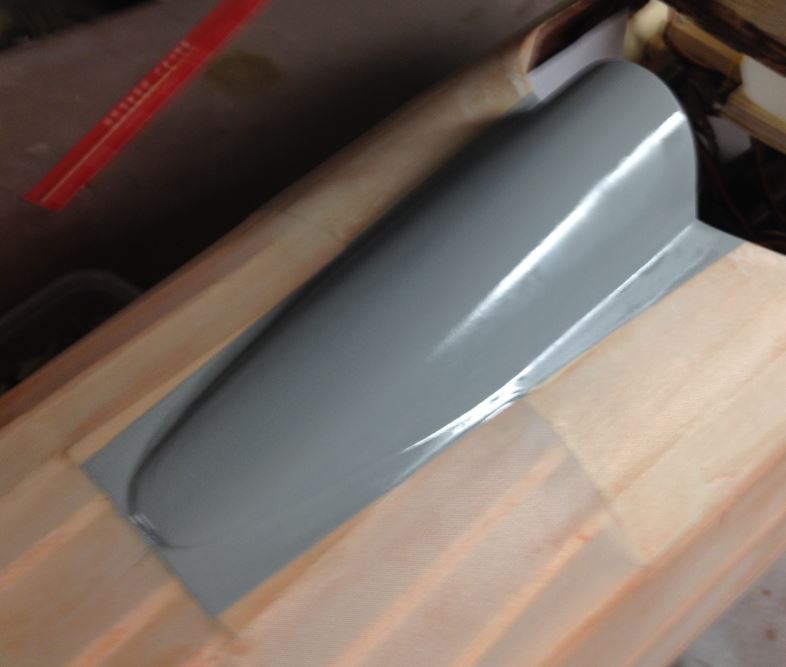 Here the final coat of primer has been applied. 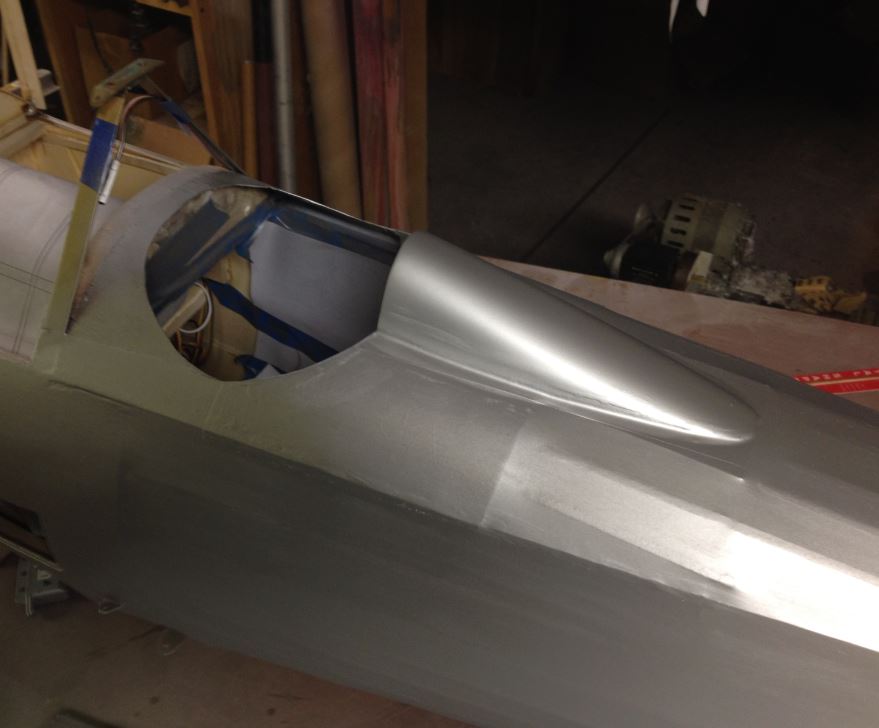 Here the fuselage has had two coats of silver added to seal the fabric. 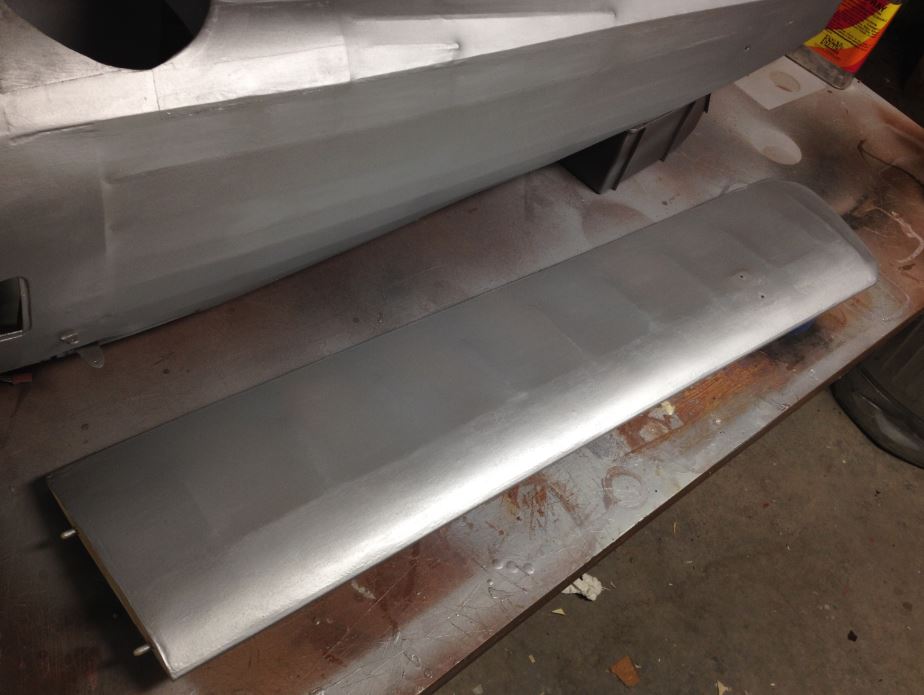 Here is one of the bottom wing panels drying alongside of the fuselage. 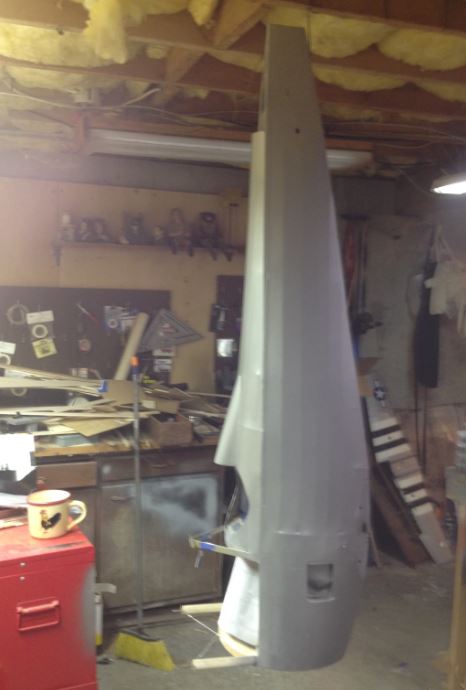 Here the fuselage is hanging in the shop to allow the silver coat to dry overnight. 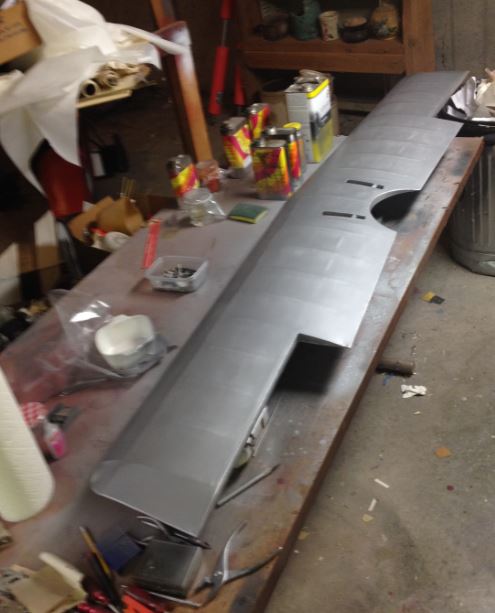 Top wing now has the first coat of silver undercoat applied. A scotch brite pad is used to smooth the first coat then a second heavier coat is applied and the wing is hung to dry. 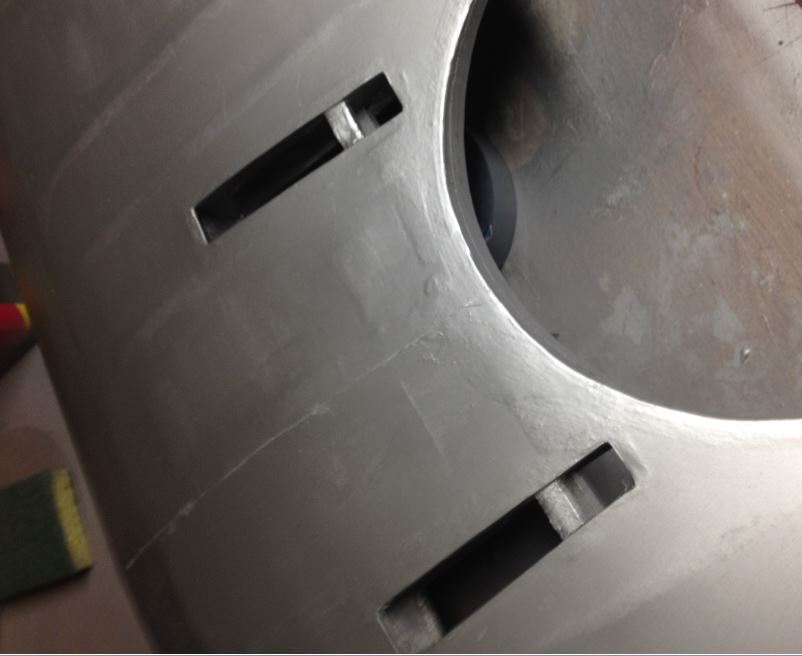 These opening in the top wing are for the scale aileron belcranks. These will be a mini project in and on themselves.