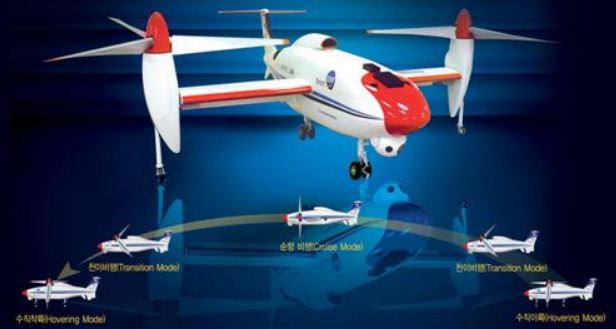 South Korea unveiled its latest unmanned aerial vehicle (UAV) that is the world’s fastest and also the world’s first remote-controlled aircraft capable of taking off and landing vertically. The aircraft has “tilt rotors,” meaning its rotary wings tilt, giving it a helicopter-like capability to vertically take off and land when its wings are facing upward, and the speed and operation range of a jet when its wings are tilted forward, according to the Ministry of Knowledge Economy. 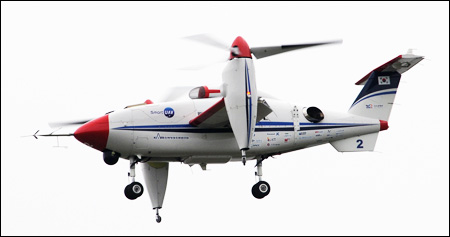 The new UAV has been in development since 2002 under the leadership of the ministry and the Korea Aerospace Research Institute, together with dozens of private businesses and research centers. It has yet to receive an official name. There is only one other aircraft with tilt-rotors in the world, which is the V-22 Osprey used by the U.S. Marine Corp. “This is the world’s second tilt-rotor aircraft but the world’s first UAV with such capabilities,” Nam Ki-man, a ministry official, said at an earlier press briefing. The official added the aircraft was also the world’s fastest UAV with a cruise speed of 400 kilometers per hour, or about “twice as fast as an helicopter.”  The world’s best-known UAV, the U.S. Air Force’s Predator, is said to have a cruise speed of 84 miles per hour or about 135 kilometers per hour, and a maximum speed of about 217 kilometers per hour.   The aircraft’s unique capability of vertical takeoff and landing also means it can have numerous applications. The developers are now working to downsize the aircraft to about 60 percent of its original form, which currently stands at 5 meters in length and 7 meters in width and weighs 1 ton. “It can also be used as the platform for a personal air vehicle that is capable of door-to-door operations without a runway,” Nam said, adding many investors and buyers were already showing interest in the new aircraft.   The price of the aircraft has yet to be set, mainly because the developers are not yet sure of their initial production volume.  Nam said mass production could begin in less than three years after the development of the aircraft is completed in March.