With the Old Rhinebeck WW1 RC Jamboree just two weeks away, we thought we’d show you a way to build your own Mission event capable airplane in the style and type familiar to the original event. This plan is from the 1960s and is a 3-channel sport flyer. 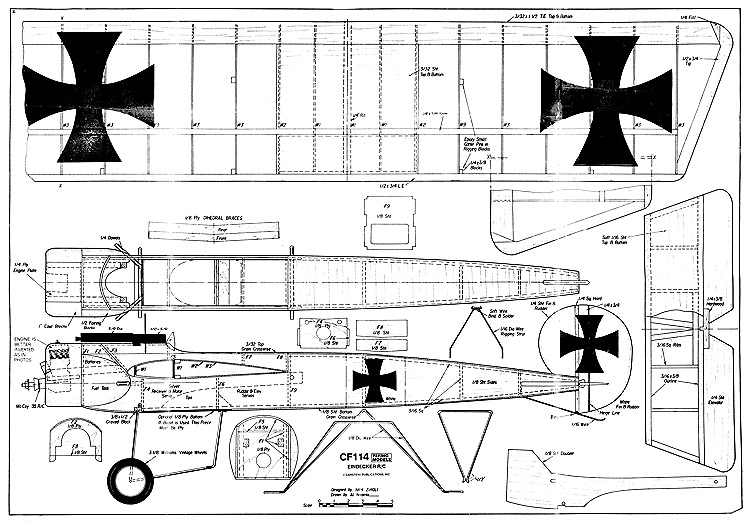 We grabbed the original 55 inch Fokker Eindecker plan designed my Nick Ziroli Sr., and we came up with a modern CAD version that you can download here below. The plans are full size and show modern details. Ailerons are also shown but they aren’t really needed. If you do decide to add them, Nick suggests taking half of the dihedral out of the wing to minimize adverse yaw.

We check with Nick and it’s OK we promise. Nick approves of the new design, and there is even a vacuum formed cowling available from Ziroligiantscaleplans.com

The plans do show a brushless motor but our prototype is powered by an O.S. .25 FX 2-stroke glow engine. All the wood to build the model was purchased locally and we used Zap adhesives throughout the build. For a radio, we used a Spektrum DX9 and JR servos. Nothing special, and there’s plenty of room for any radio and servo combination you’d care to use. 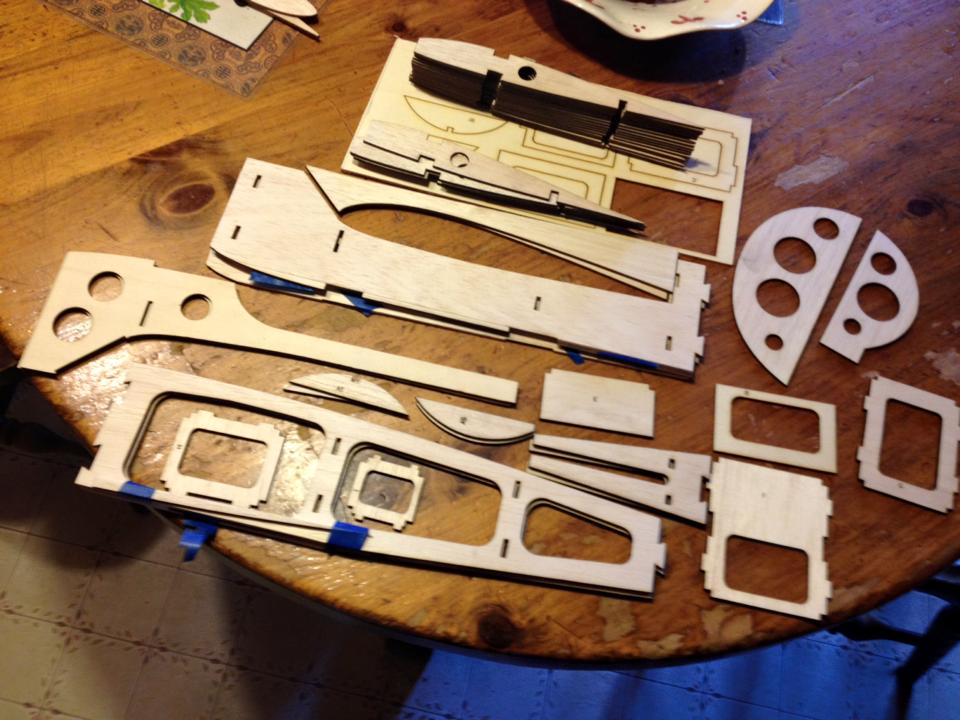 There are plenty of laser cutting services around do you can have parts cut, or you can go old-school and use your X-Acto blade.

All the parts are made with lock-tab construction so everything fits together precisely and you can assemble most of the fuselage off of the plans. 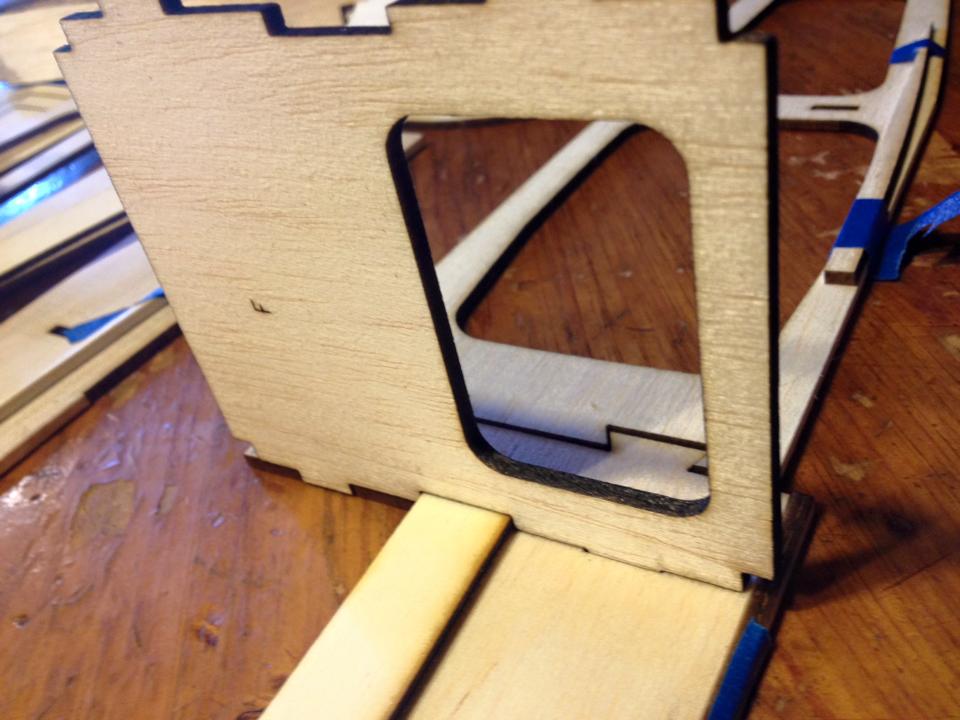 A good thing about lock-tab construction, you can really lock things into place then add the adhesive after you get the alignment correct. The firewall is made from two layers of 1/8 inch plywood and the front face layer has the tabs which lock into the fuselage sides. 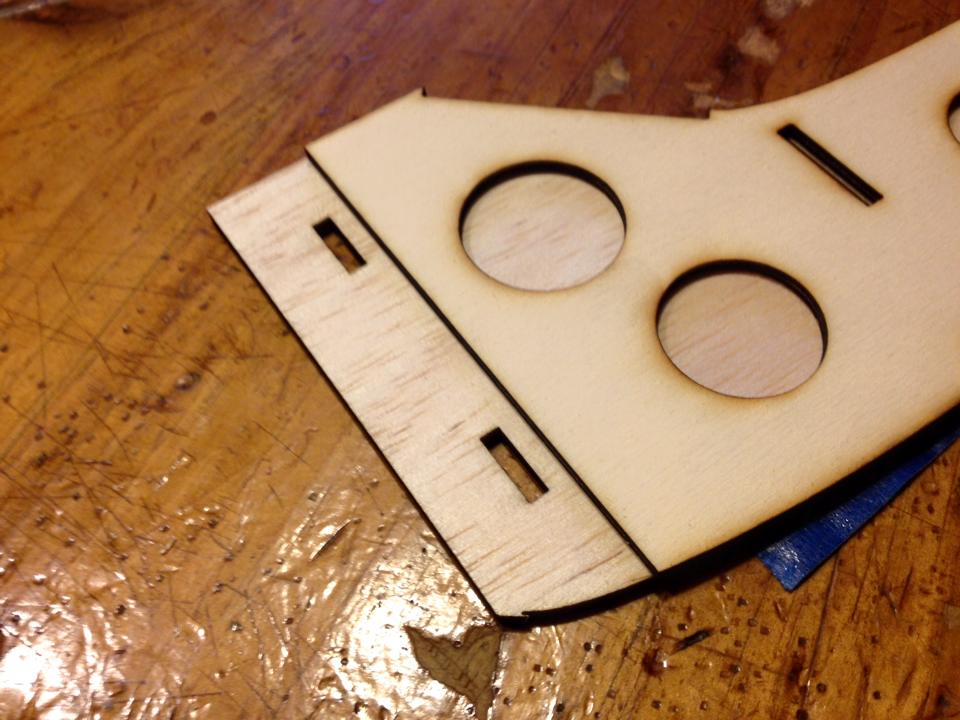 I like to start at the front of the fuselage and work my way back to the tail and with the formers all installed, the natural curve of the sides gets built in so there’s no excess stress built into the structure. It is also easier to install the engine and firewall before gluing the firewall into place. 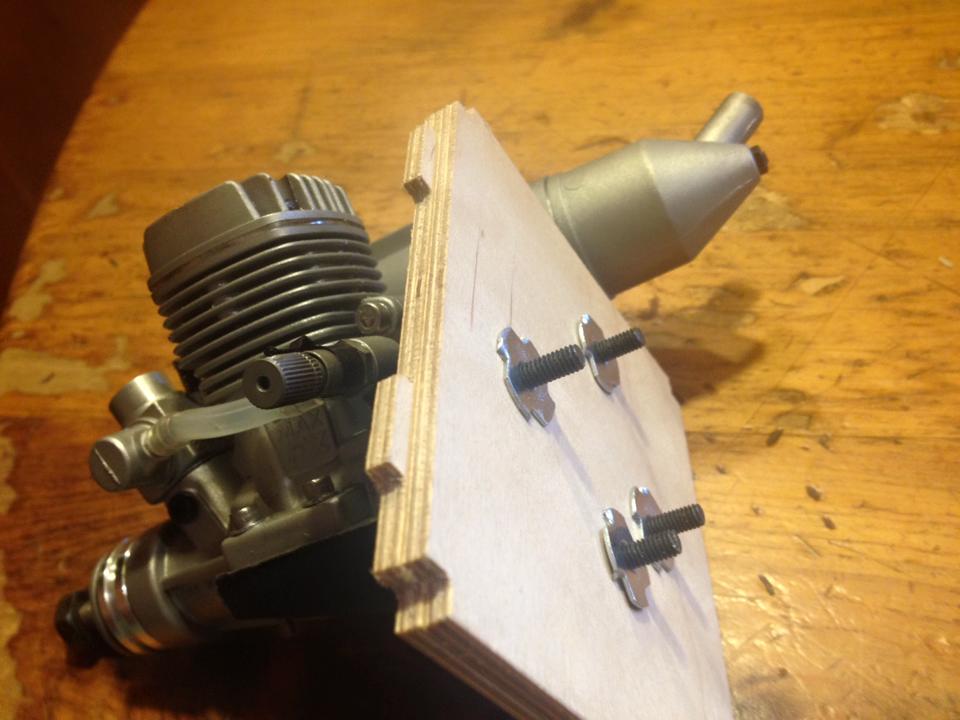 To get the engine distance correct, the fuselage is set back about 3/4 of an inch from the front of the fuselage sides. The rounded shape of the front is formed with the top and and side formers that are located at the very front of the side pieces. 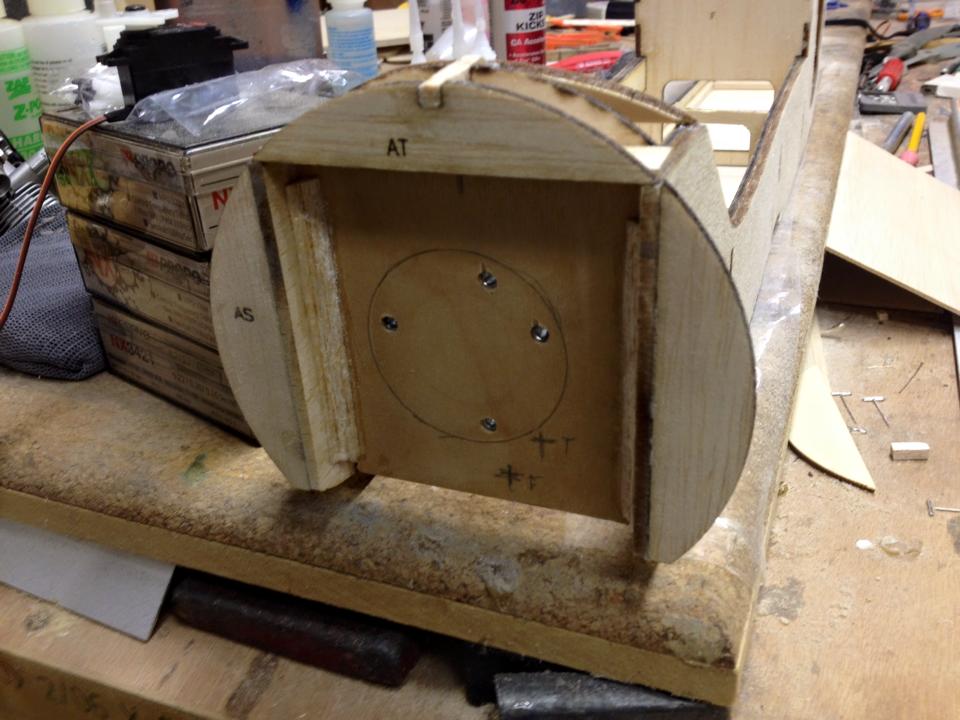 Now is a good time to add the rest of the formers. As you can see, the side pieces have large lightening openings. This also makes if easier to install the pushrods and stiffeners. 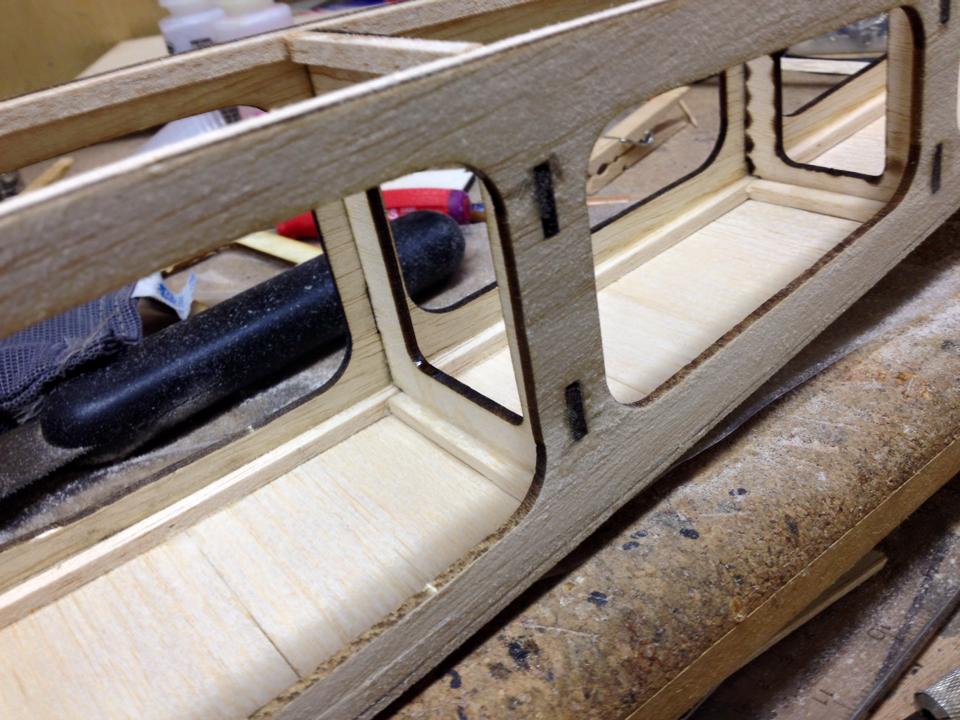 Filling in the area in front of the wing saddle, There are lite ply formers that also define the shape of the top deck that will eventually be glued to the top of the wing. 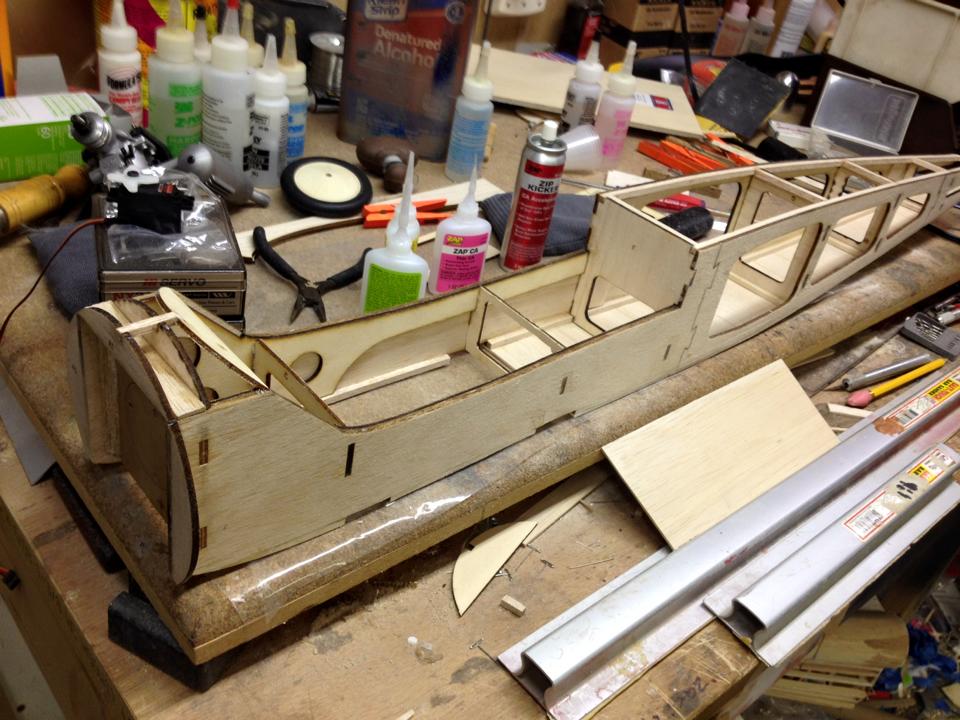 Eventually the top and bottom of the fuselage will be sheeted with 3/32 inch balsa. 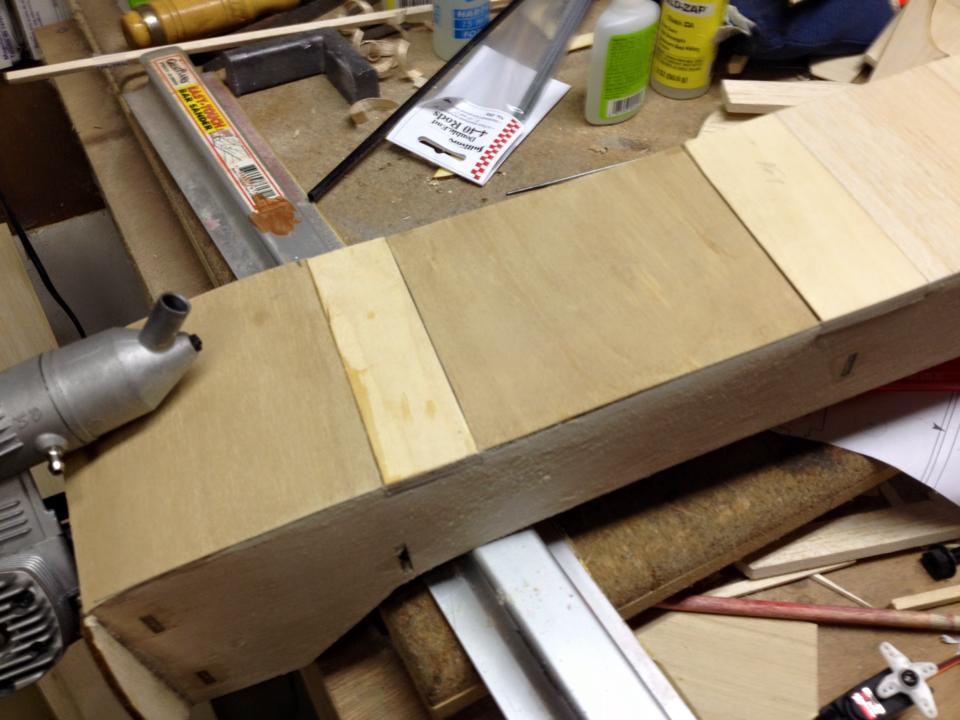 Here the bottom of the fuselage shows the 1/4 inch plywood attachment plates for the landing gear. Thin 1/32 inch plywood is used to make the forward fuselage more rugged without access weight buildup. 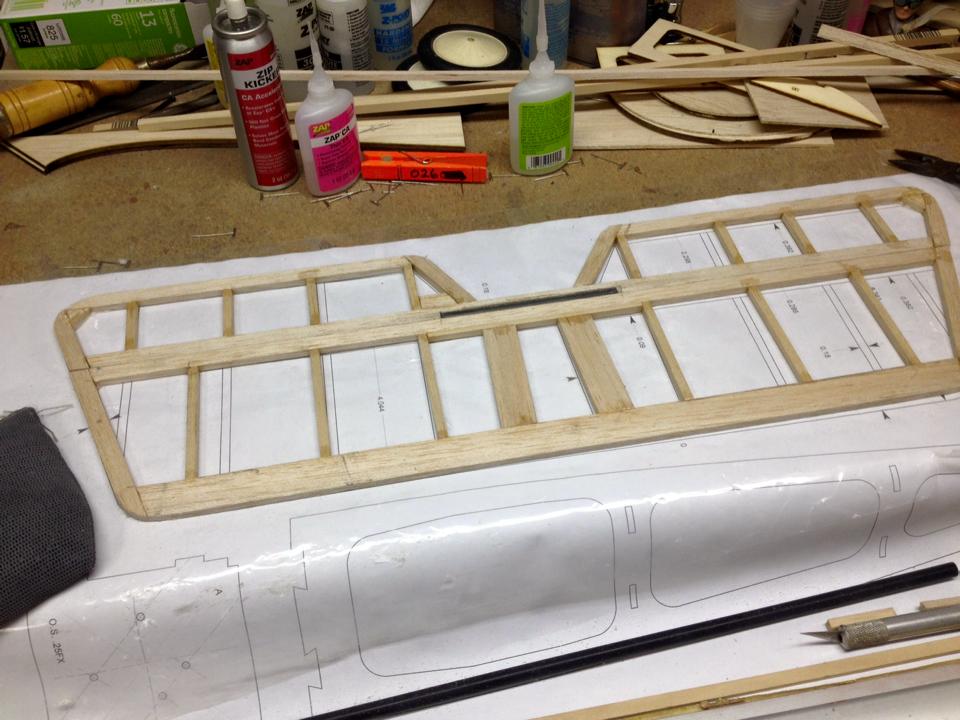 The stabilizer and the elevators are made from stick stock and then later sheeted top and bottom with 1/16-inch balsa. 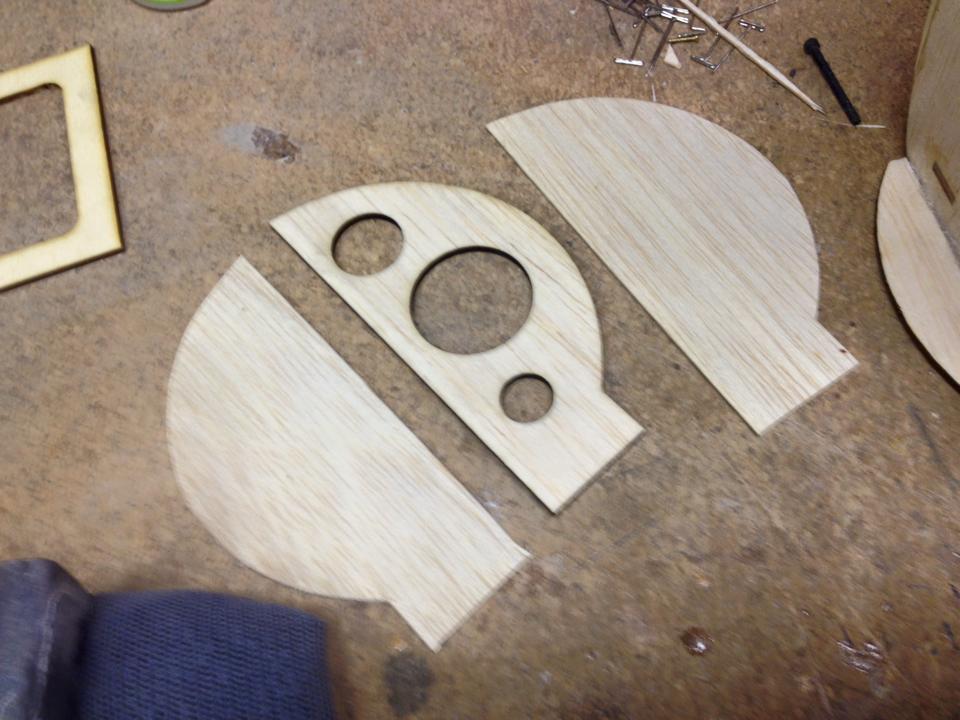 Instead of using solide 1/4 inch balsa for the vertical fin and rudder, I used a 1/8 inch core sheet (with lightening holes), and covered either side with 1/16-inch balsa. 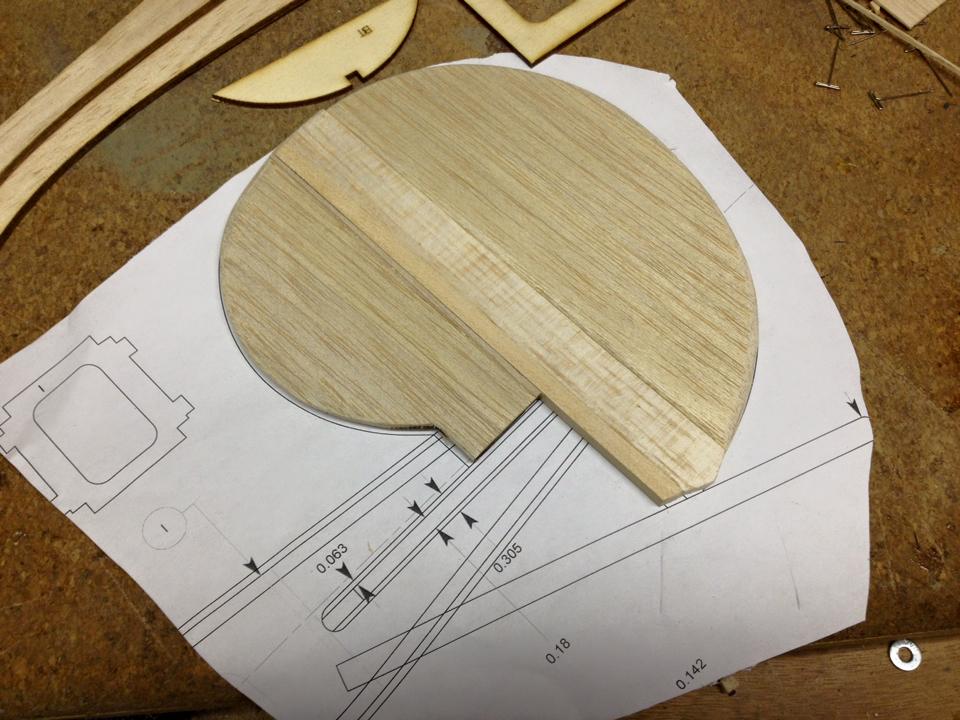 The same is done for the rudder. Shown below the horizontal stab slides easily into place. 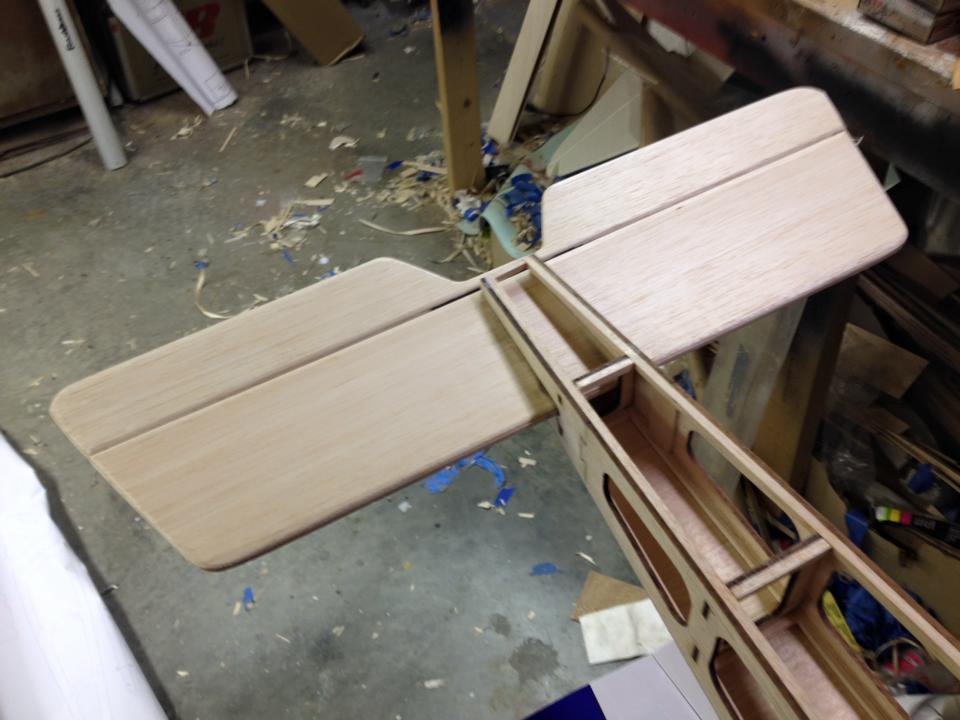 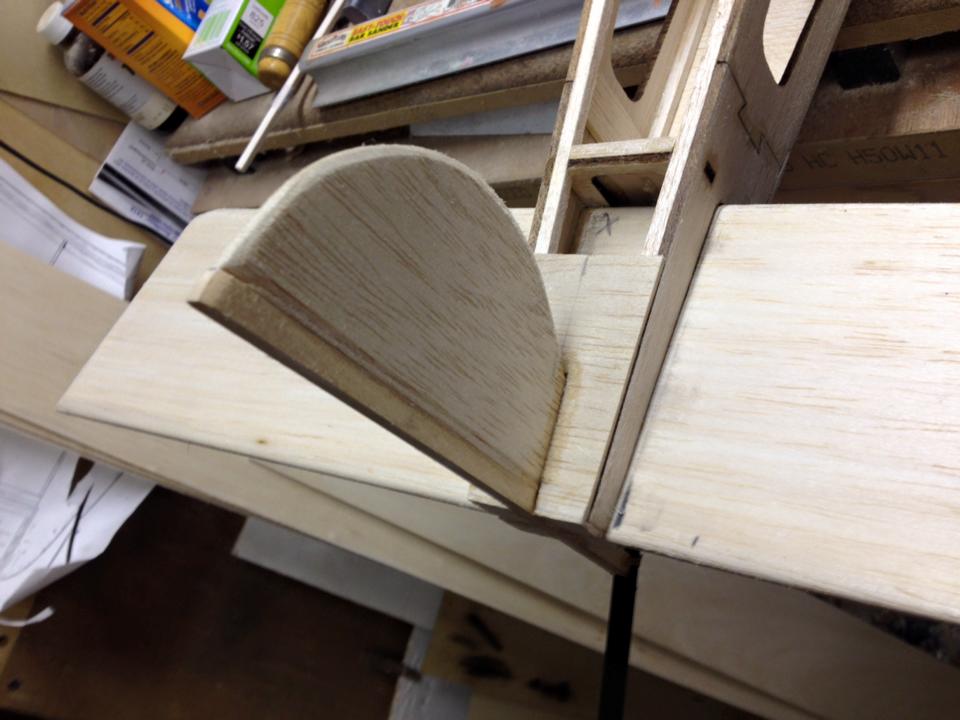 Here the vertical fin and horizontal stabilizer have been installed in the fuselage. A notch is cut in the center of the stab’s trailing edge to clear the hardwood vertical strip that strengthens the fin. 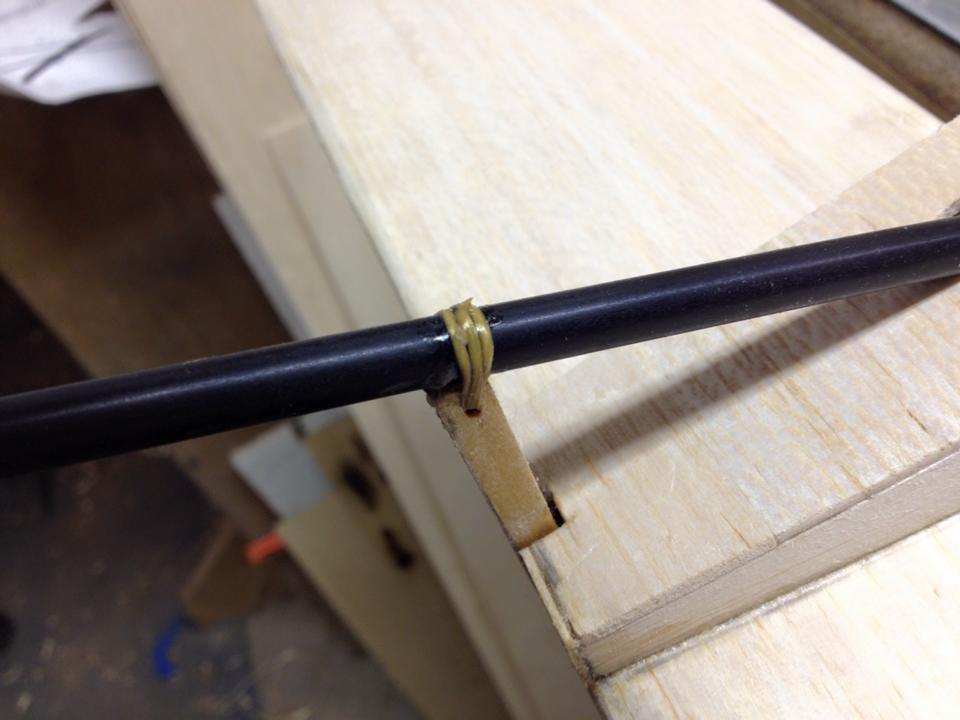 Also to save weight, I replaced the hardwood dowel with a carbon fiber tube. I used some kevlar thread to secure the tube to the bottom of the hardwood strip. The top of the tailskid is secured with a plywood plate glued to the last former/ 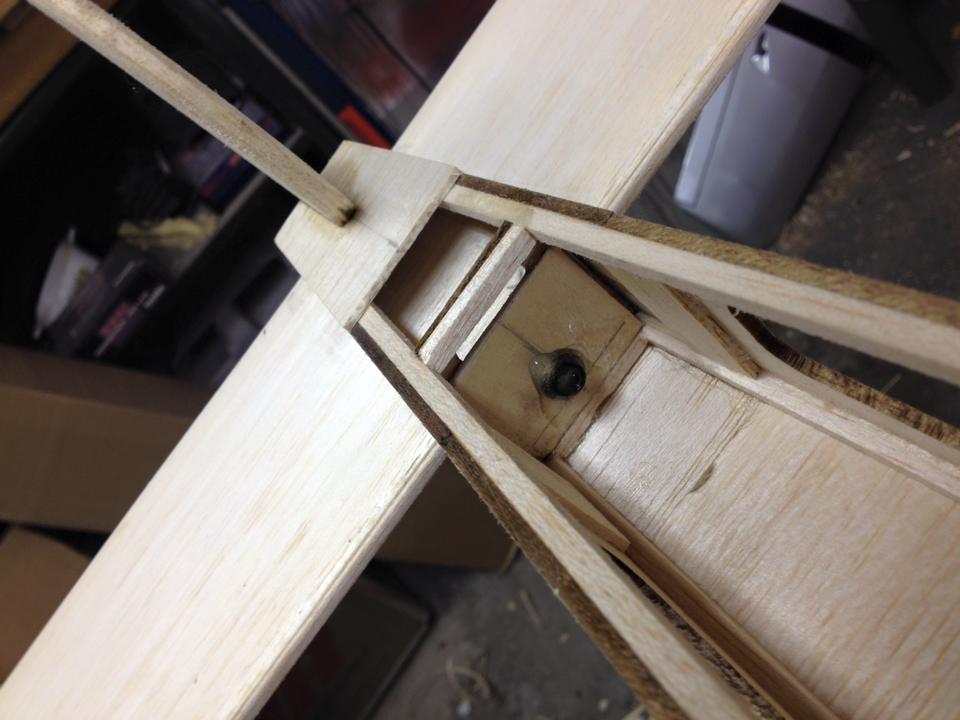 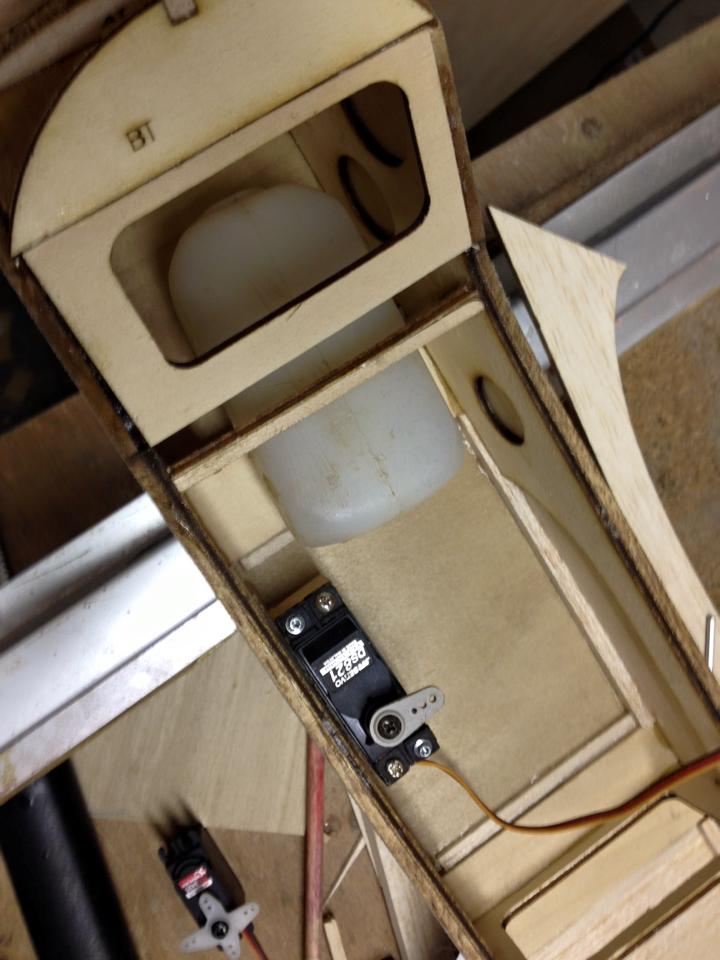 With the tail coming together, the throttle servo and fuel tank are installed next. Again, there’s lots of room. 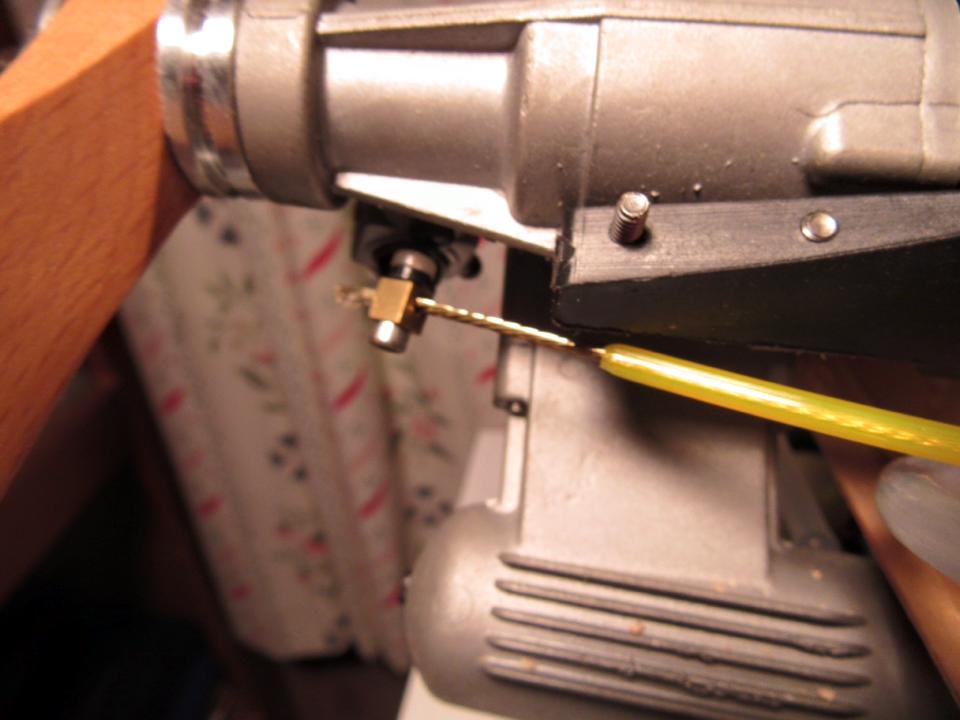 A simple braided throttle cable from Sullivan Products makes up the throttle linkage. This makes clearing the tank and engine mount very easy without any binding at the throttle arm. 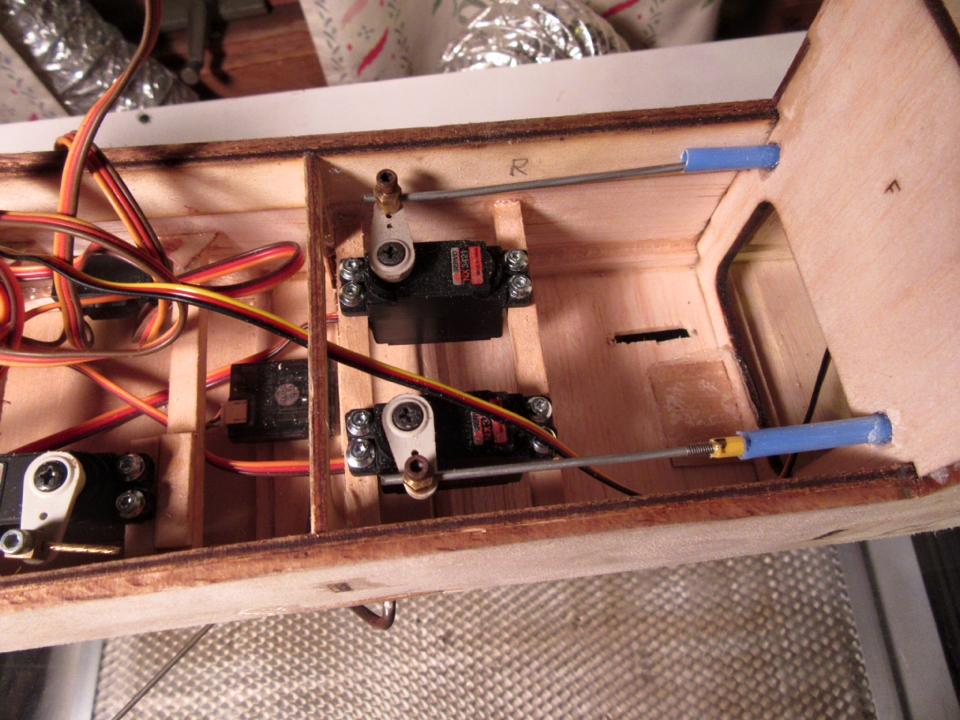 Again I used Sullivan Products for the pushrods for the elevator and the rudder. DuBro EZ Connectors are used to connect the pushrods to the servos. 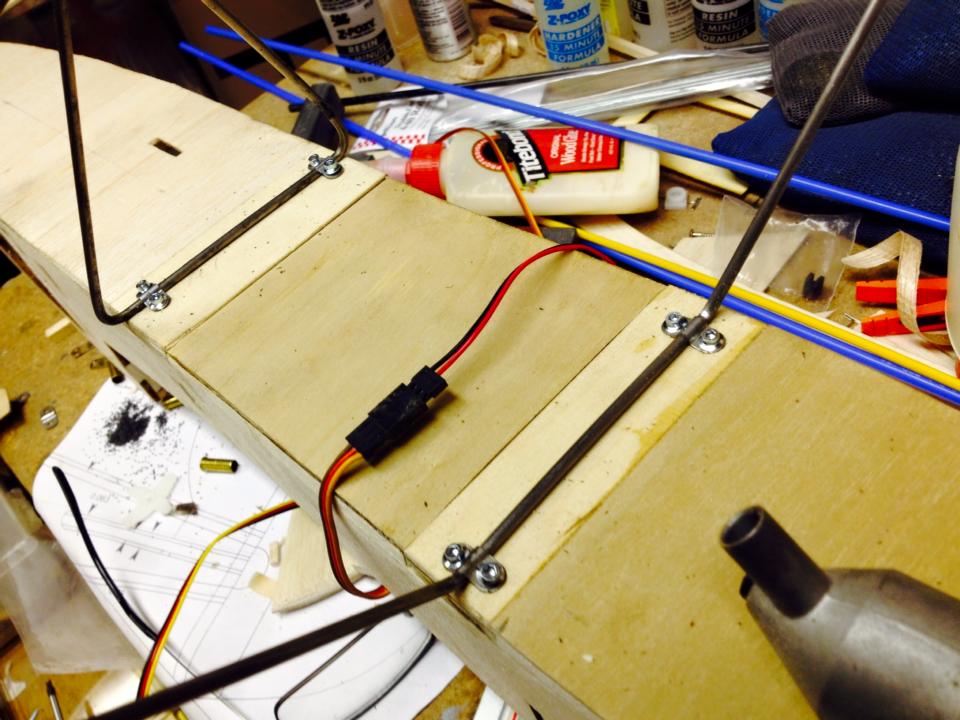 Here the landing gear wires have been attached to the plywood plates in the belly. This helps hold the gear in place for soldering. 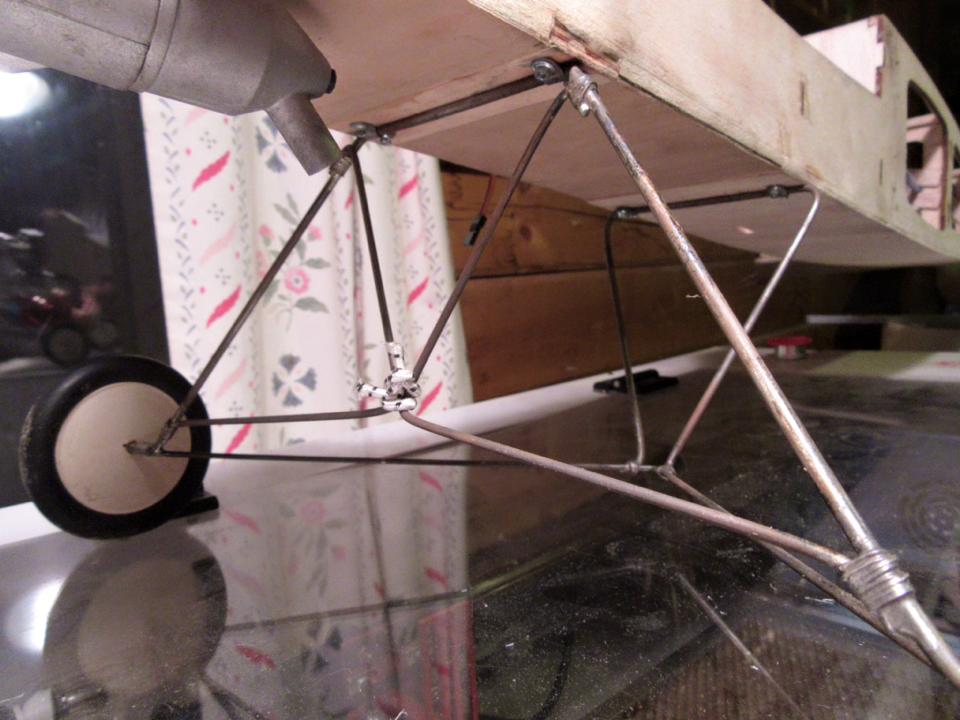 That’s it for now. Come back soon as we will start on the wing shortly. Until then, make sure to pencil in the ORA WW1 RC Jamboree on your event calendar–It coming on on September 9 and 10.