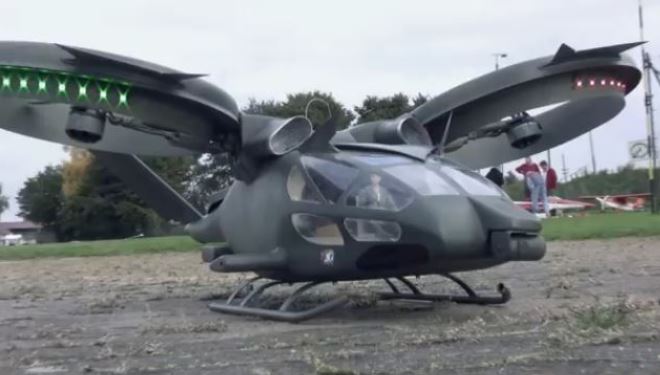 It’s time for the top posts of the year! Here, in descending order, are the top stories from 2014, according to number of views each had. Missed one? Just click on the photo or title to go to the original post.  And as we send the last newsletter of 2014, we want to thank the folks who’ve sent us emails or spoken to us in person at an event or show. Your enthusiastic feedback drives the Model Airplane News team to find and post interesting, informative and (we hope!) fun stories to send out to you every Friday. Here’s to 2015!

Number 10. Magnificent Mossie
Here’s another treat from our British friends Pete and Dean Coxford: an enormous de Havilland DH-98 Mosquito! This video is a compilation from two flights by RC airshow pilot Steve Holland during a weekend event at RAF Cosford, hosted by the Large Model Association.  Besides the fact that this is a new build, we don’t have any details on this impressive plane. If any of our UK readers have more info, we hope you’ll share with us! [Editor’s note: unfortunately we did not get any additional info on this model.]

Number 9. Drone Racing, Star Wars Style!
Inspired by the air race scene in The Phantom Menace, 24 FPV drone pilots sped through a forest in the French Alps, weaving around trees and low-hanging branches to reach speeds of 31mph! The brainchild of the Airgonay drone club, the event pitted four pilots at a time, flying three laps of the nearly 500-foot course. Club president Herve Pellarin says they hope its success can inspire like-minded drone enthusiasts around the globe to put their skills to the test. Check out this video!

Number 8. Monster OV-10 Bronco
Without a doubt, our friends across the pond take giant-scale modeling seriously … just take a look at this behemoth Bronco! With a 14-foot wingspan, this OV-10 was designed to use two Zenoah 62 gas engines and weighs in at around pounds. The giant was originally built by Tony Nijuis, and new owner Steve Holland is flying it at the recent UK Blackbushe Air Show. It only takes Steve about 20 minutes to assemble the aircraft, and if you watch the video it’s clear that he has it down to a science. This giant twin is impressive on the flightline and magnificent in the air; check it out!

Number 7. Scale Samson from the Avatar Movie
When Ralph Kayser saw the science fiction movie “Avatar,” he knew he had to try and build one of the high-tech aircraft that were featured in it. The result is this 33-inch-long Samson, which features Ralph homemade molded part and RC helicopter equipment. Ralph powers it with two Dymond AL 3530 motors on a 3S 2100mAh LiPo for 4-minute flight times. Don’t miss the video, and stay tuned for a detailed article on this fantastic flying creation! Thanks to German magazine Flugmodell und Technik for posting this great piece.

Number 6. Super Constellation Flies Again
You don’t see large prop-powered commercial aircraft anymore, so this model of the 1950s Super Constellation L-1049C is a special treat. Max Ulrich built the all-wood plane from enlarged Don Smith plans and in this video is flying it at the Oldtimer Meeting in Switzerland. It’s powered by four 4-strokes. Thanks to RCHeliJet for posting this to YouTube.

Number 5. 1/3-Scale Stormbird Flies Again
Ali Machinchy recently took his Me 262 jet out of storage to fly at the RAF Jets event at Abingdon field in the U.K., and we’re glad he did! Ali tells us, “The wing joiner is actually a steel section. The design and build of the model was done by a very experienced engineer with decades of experience in very large model designs. The fact that this model is over 8 years old and has had many hundred of flights is testimony to the design … Although I do still look in amazement how such a small looking joiner carries the loads!” Our friends and YouTube posters Dean and Pete Coxon took this great video, which includes footage from two GoPros that were onboard the 1/3-scale jet.

Number 4. 12-Engine Flying Boat
A true scratch-built project, this 1/10-scale Dornier DO X1a was designed, built and piloted by Michael Bräuer. This impressive built-up plane has a 16-foot wingspan and weighs in at 132 pounds, and it’s powered by twelve (12!) O.S. .62 4-strokes. Michael notes that he spent one year building this giant plane and that it has Futaba servos, fiberglass engine cowls and retracts and that its top speed is 59mph. The sound those 12 powerplants make is incredible, and the video shows how well the model handles in very heavy wind, even on landing. Thanks to RCScaleAirplanes for taking and posting this great video!

Number 3. Amazing first flight: 1/3-scale B-25
Just when you think you’ve seen a really giant, giant-scale plane, here comes a 1/3.3-scale B-25 Mitchell! Weighing in at 326 pounds, with a wingspan of 20 feet, this behemoth is powered by two 400cc Moki 5-cylinder radials and 35×13 carbon-fiber propellers. The big bomber has wood construction with fiberglass reinforcements and uses handmade retracts and 30 servos. Three Emcotec Power Cube SBus units, each with two Futaba R 7003 receivers and two 5300mAh batteries, means that no cable connections are needed between the fuselage and the wings. It is the handiwork of Roland Sabatschus, Michael Sabatschus and Daniel Sabatschus, who spent 5 years designing and building it. Congratulations, gentlemen, and our thanks to Rcgiantscaleairplanes for posting this unforgettable video to YouTube!

Number 2. Can two 700-class RC helis lift a woman off the ground?
This video from HeliGraphix may blow your mind. In it, a very brave (and strong!) woman is lifted off the ground by two Gaui X7 Megatron helis, each of which is powered by a Scorpion/Powercroco system running on a 4000mAh, 16S LiPo pack. According to HeliGraphix, maximum flight time at full power is just over 50 seconds, so there’s no time to waste from liftoff to touchdown. They say it’s a world first; we agree we’ve never seen anything like it. (Just don’t try this at home, kids!)

Number 1. 7-Engine Russian Bomber
If you like flying really big, unique aircraft, then this 16-foot-span Kalinin K-7 might be just what you’re looking for! With a wingspan close to that of a B-52, only one full-size K-7 was ever built, and it crashed after seven flights due to a tail boom structural failure, so it’s doubtful you’ll run into another RC version at the next giant-scale fly-in. With six 15cc ASP gas engines and an electric pusher motor, the 99-pound model has plenty of power. Built up from wood, it’s also equipped with 16 servos, brakes, and steerable nose wheels and can be disassembled into six modules for easier transport. Built by Rainer Mattle, this unusual aircraft can be yours for around $14,000 (shipping from Switzerland not included) … check it out at www.antik-dream-model.com. Thanks to Thomas Minder for taking a video of this monster model at the recent Kulmer Air Show in Switzerland and sharing it on YouTube!