All glow ignition engines require the use of some sort of battery to light the glow plug for starting.  In many cases, especially with inverted engine installations, a battery is needed to keep the glow plug lit during extended idle periods when glow fuel may puddle up in the combustion chamber and stop the engine.  Over the years, there have been a myriad of solutions to keep the glow plug lit while the aircraft is in the air, but all of them required the need for a separate battery to do this.

Zdatum Corporation has come up with a viable alternative to this need with the SwitchGlo Onboard Glow Lighter. (PHOTO 1)  It uses the power available from the receiver battery to light the glow plug, and no external battery is needed.  The SwitchGlo comes with printed instructions and a plug clip for use on the ground.  Optional plug twist lock connecters are also available at extra cost.  It can be used on battery systems ranging from 4 volts to 9 volts, meaning that it is suitable for 4 cell, 5 cell, LiPo and A123 type battery systems.

The SwitchGlo measures 1 5/8” by ¾” by 5/8” and weighs 206G (0.8 oz)  It can be set up in just about any glow engines vehicle, be it car, plane or boat.  It is completely encapsulated in epoxy, making it waterproof.  It is compatible with just about any receiver/transmitter system available today.

OK, you are all now saying that this unit will drain the receiver battery in short order and your plane will fly away or crash into the ground once the battery is drained.  Well, that is taken care of with the circuitry inside the SwitchGlo box, and it is taken care of quite well.  Pulse Width Modulation (PWM) is a method of changing a higher voltage into a lower voltage by turning it on and off at regular intervals so that the average voltage is made lower.

Let’s say you have a 6 volt battery but you need 1.5 volts to light your glow plug.  You could insert a resistor to drop the voltage but all this would do is generate a lot of heat and drain the battery quickly.  PWM technology uses much less battery power to generate and in this case the output pulse with would be on for 25% of the time and off for 75% of the time, resulting in a 1.5 volt average output, and your plug would be lit up perfectly.  The SwitchGlo unit has internal battery sensing circuitry that measures the battery voltage and adjusts the pulse width to generate the right glow plug voltage no matter what the battery voltage happens to be.

More importantly, the SwitchGlo also has a programmable timer that limits the time the plug is lit (hence the time the receiver battery is being used) to 12 seconds.  You can set the switches (PHOTO 2) so that the plug is powered for 12 seconds at a time which should be long enough to start the engine.  If the engine does not start in the 12 second time period, you can start it again for another 12 seconds, and continue to restart the 12 second time for a maximum of 60 seconds.

The SwitchGlo can also be set up with a programmable channel mixed with your throttle servo to allow the plug to be lit during periods of low throttle operation.  This is done in your transmitter and instructions are provided for many modern radio systems that have programmable mixing.

The SwitchGlo is plugged into a channel on your receiver, either the throttle channel or a dedicated on-off channel, and the signal can be reversed depending on your radio system.  There is a warning buzzer that sounds when the plug is lit, and this can be turned off if desired.  The buzzer also can be used as a “lost aircraft finder” if the need arises.

Another optional accessory is the PushGlo (PHOTO 3) a do-it-yourself kit that allows the operation of the SwitchGlo from the aircraft rather than the transmitter.  After wiring the plug-in part of the board to the push button and LED board, the user can simply push the button, the LED will light up and the glow plug will be ignited for 12 seconds.  After the engine is started, either the 12 second timer or a 2 second push of the button will extinguish the plug.  The remote ignition feature from the transmitter will still be available if selected.

I set up my SwitchGlo on the bench using a standard glow plug and a 2 cell A123 battery with my Spektrum DX7 receiver and transmitter.  I set up both the programmable mix and the optional channel to see how it worked.  I also included an ammeter in series with the receiver battery lead to measure how much current was drawn from the battery when the plug was lit.

I first measured the glow plug current using a standard glow plug igniter battery and got 2.49 amps.  This will tell me how well the Pulse Width Modulation operation on the SwitchGlo works.  The current drawn from the receiver battery when the plug was lit was only 0.81 amps, significantly less than what was drawn by the plug at first.  It is still a significant amount of current, but the 12 second timer will limit the time the plug is lit.  Also, if the receiver is turned off, the plug is extinguished, even if it is turned on at that t
ime.  PHOTO 4 shows how well the plug is lit when powered by the SwitchGlo

The SwitchGlo will cost about $65.00 plus $5.00 worldwide shipping and the optional PushGlo board costs an additional $11.00.  Check out their website for more details. 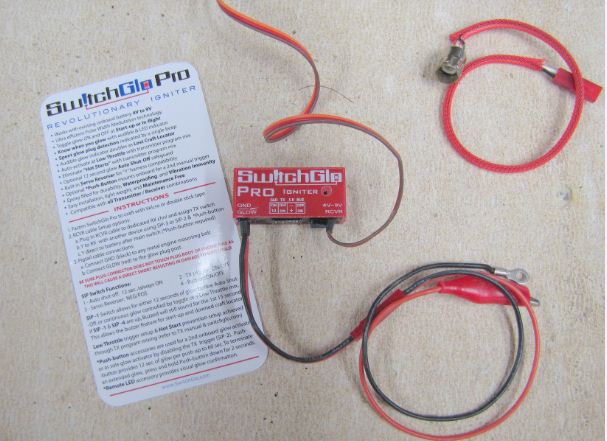 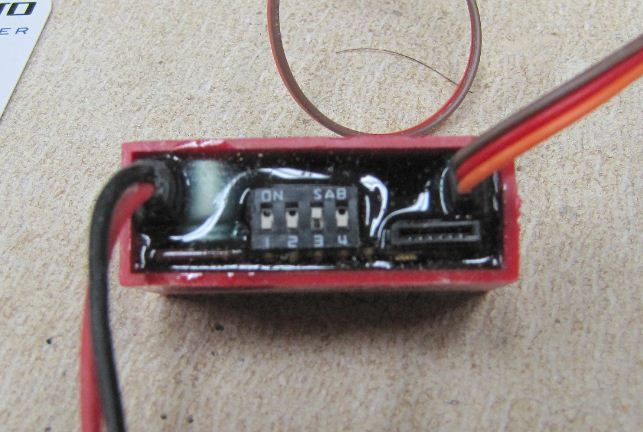 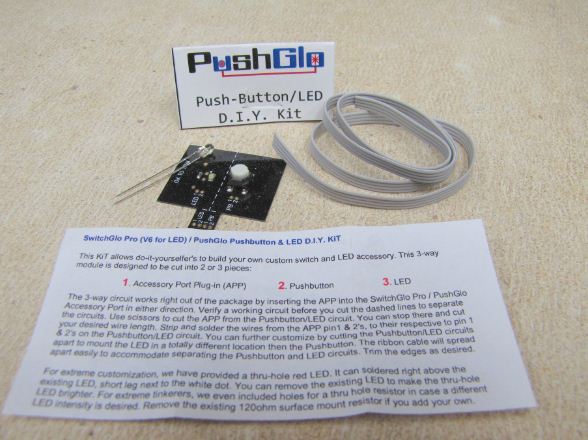 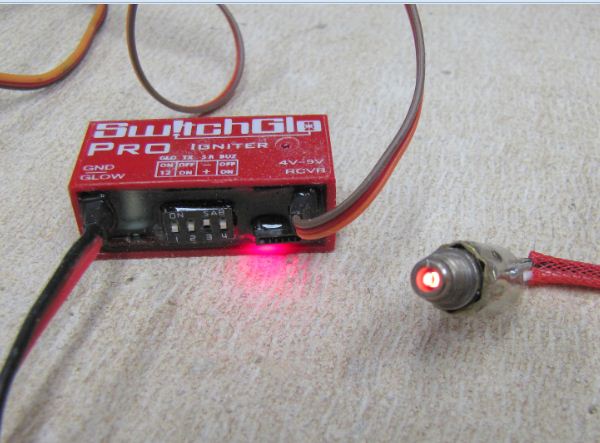