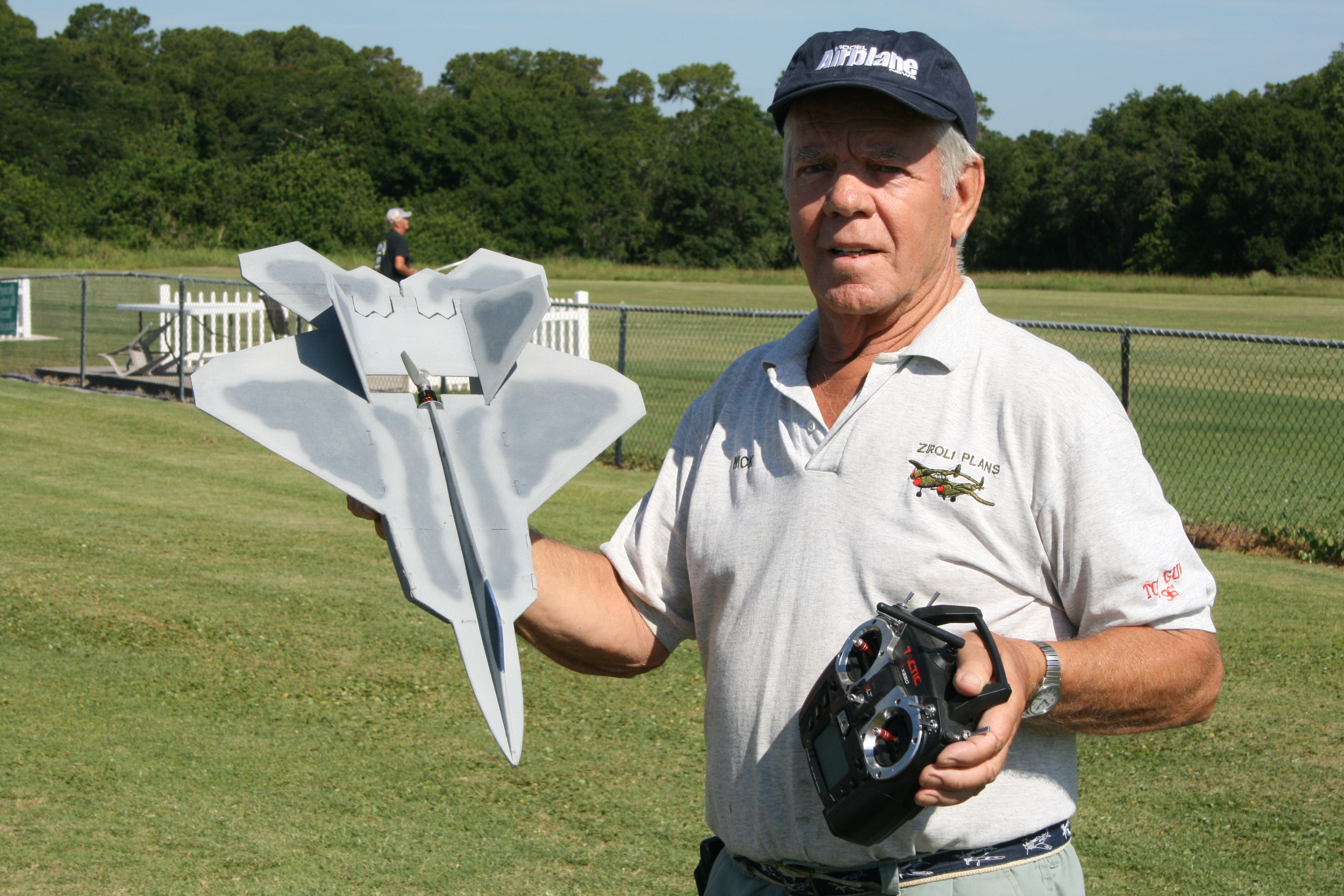 Recently, I stopped to see my old friend Joe Petro’s, Zippkits.com booth while attending the 2015 Toledo Show. He had two new offerings, both easy to assemble, semi-profile foam board jets. The F-22 has a 16.75 inch wing span and the F-18 has a 17.75 inch span. Both are 24-inches long and the motors are mounted mid wing as a pusher with the prop running through a slot in the wing. The light weight foam board material is 3/16 inch thick and has a good strength-to-flexibility ratio. 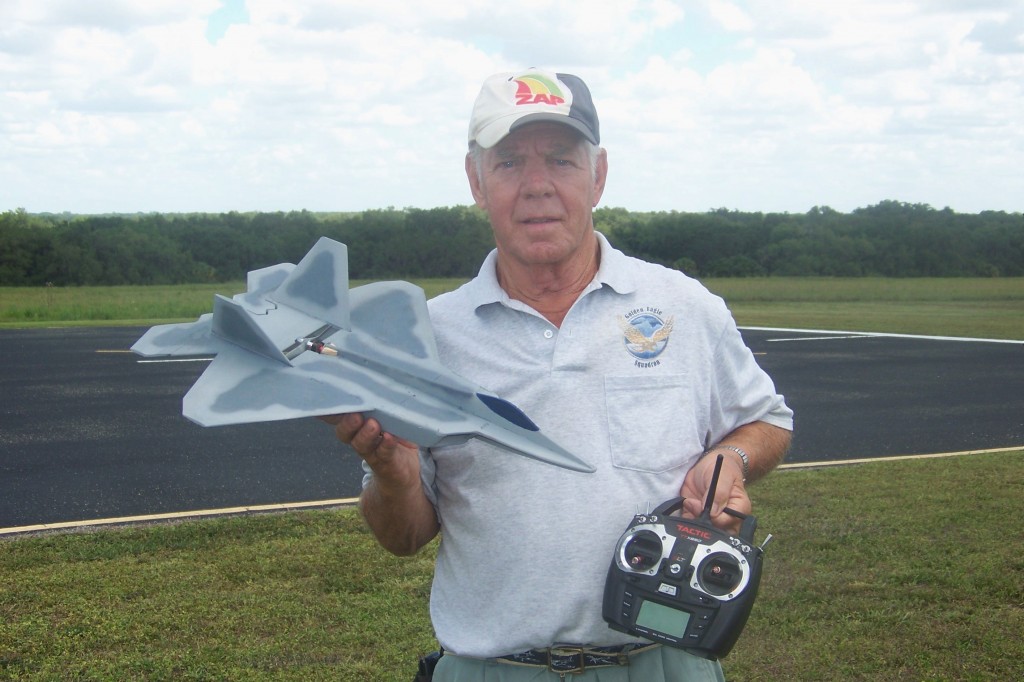 All the parts are accurately CNC routed and fit together well. The only wood included is the laser cut 1/32 inch plywood motor mount plate and control horns. Foam safe CA glue, such as Zap medium Foam Glue is recommended for assembly. I didn’t have any CA on hand so I used Zap Canopy glue. 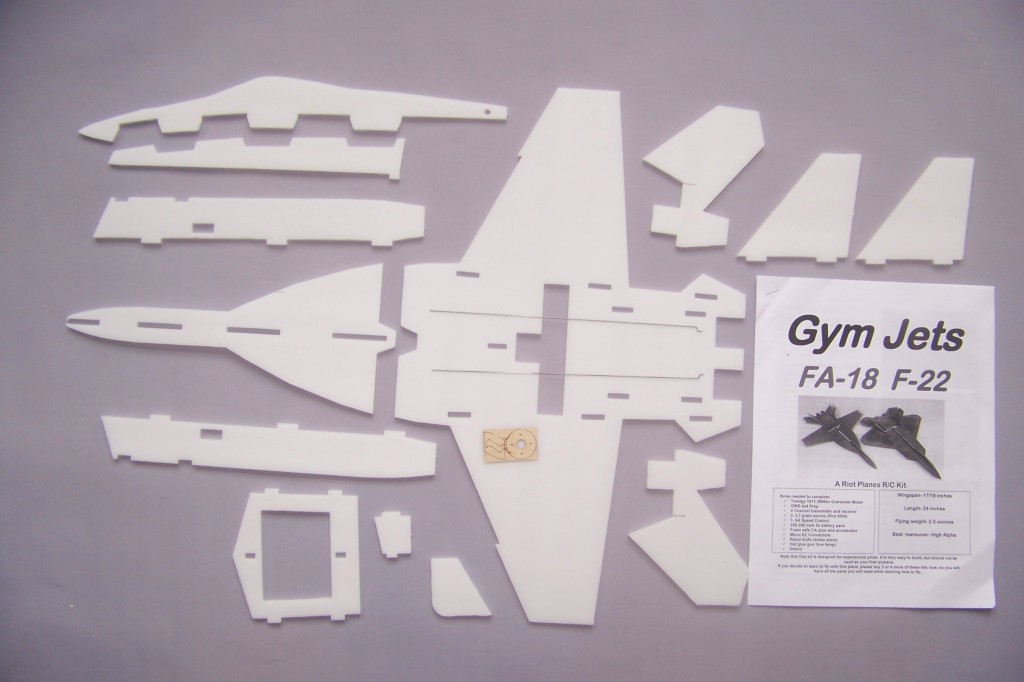 This worked very well creating a very strong, resilient joint. This of course is at the expense of taking more time. Using CA glue the airframe can be built in about an hour. 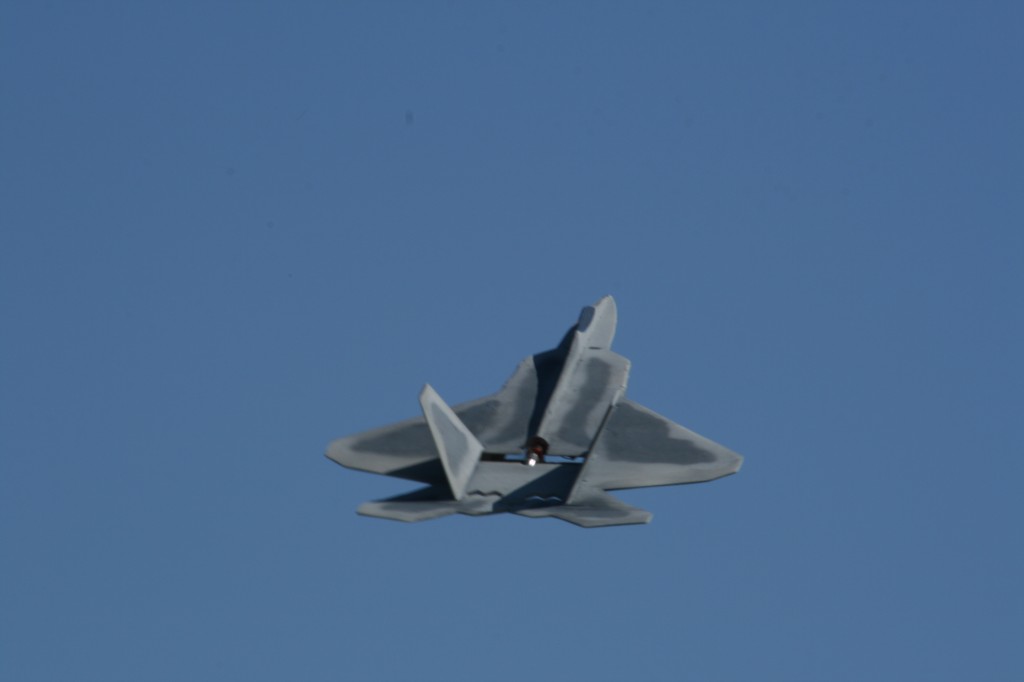 The instructions, 4 pages, with 9 photos are brief but adequate. There is no mention in the instructions to round any corners of the flying surfaces. I doubt you would ever see a difference in performance by taking the time to do this. But, I can’t put a model into the air without making it reasonably aerodynamic. The leading edges were rounded and the trailing edges tapered. A waste of time? Probably, but that’s me. I painted the F-22 with inexpensive Acrylic craft paints, light and dark grey. A Pasche airbrush was used to apply it. 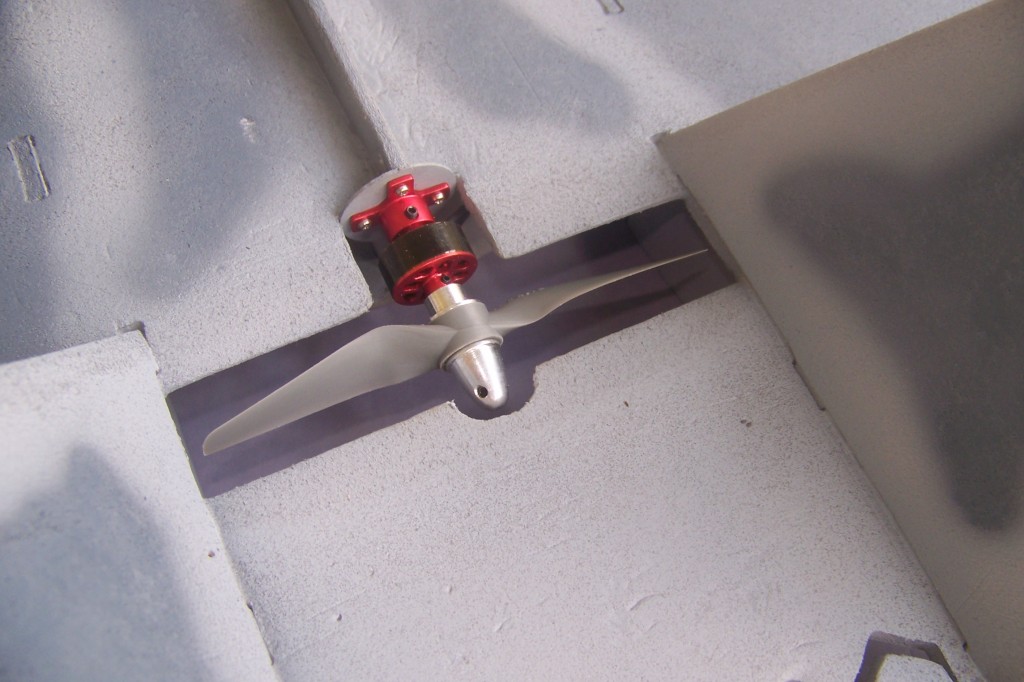 The two Riot Planes #5004 3.7 gram servos were glued in place with canopy glue. The #2 mounting screws that are included with the servos were used to mount the motor, a Turnigy 1811 (2900 Kv) outrunner. I found that after a few flights the motor mount plate was breaking loose from the foam. I added 1/4” x 3/8” 3/4″ balsa braces in the corners in front of the motor mount. Instructions suggest the motor and speed control leads be soldered together. Since bullet connectors are included with the motor I used them, more time. The Tactic 624 receiver, Turnigy 6A speed control and Nano-tech 260 mAh 2 cell battery are held in place with sticky back Velcro®. Locate the battery to balance the model. I used an APC 4.1×4.1 prop. 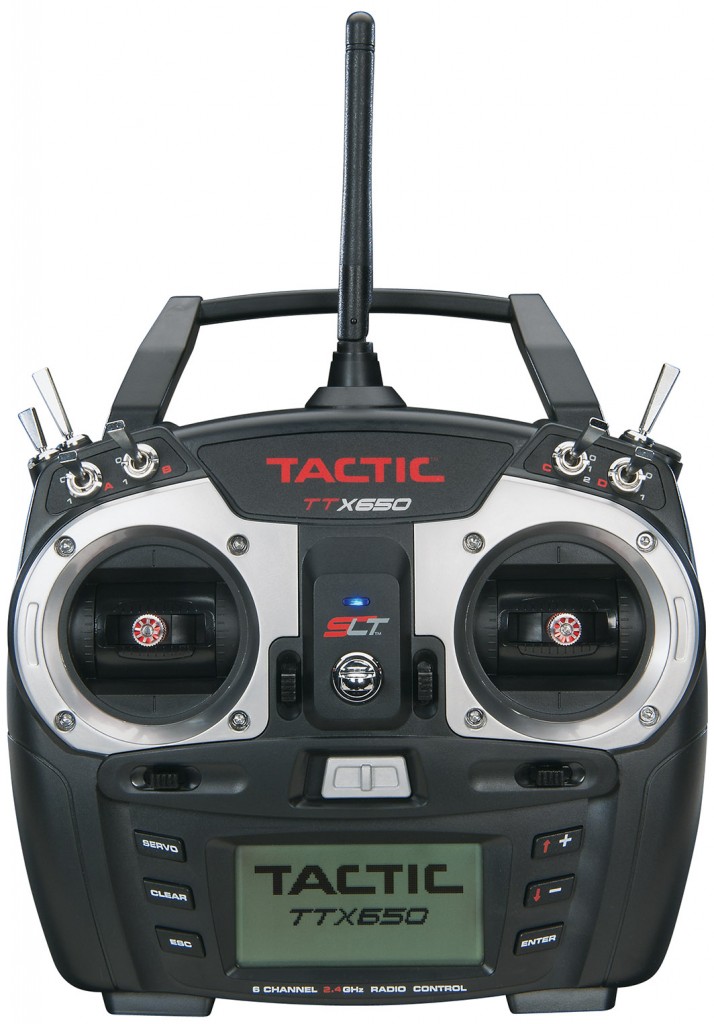 A transmitter with elevon/delta mix function is required. I used the 6 channel Tactic TTX 650 system that has this and many other features. Instructions say to connect the pushrods, included, to the end hole on the servo arm. Dubro #845 Mini E/Z Connectors, not included, were used here. The pushrods have pre-formed Z bends at one end that connect to the control horns. I felt this was going to be more throw than I desired so moved it in one hole on the servo arm. The recommended servo throw is 100% for aileron and 60% for elevator. Low rate was set for 80% and 50% with 35% expo on all settings. 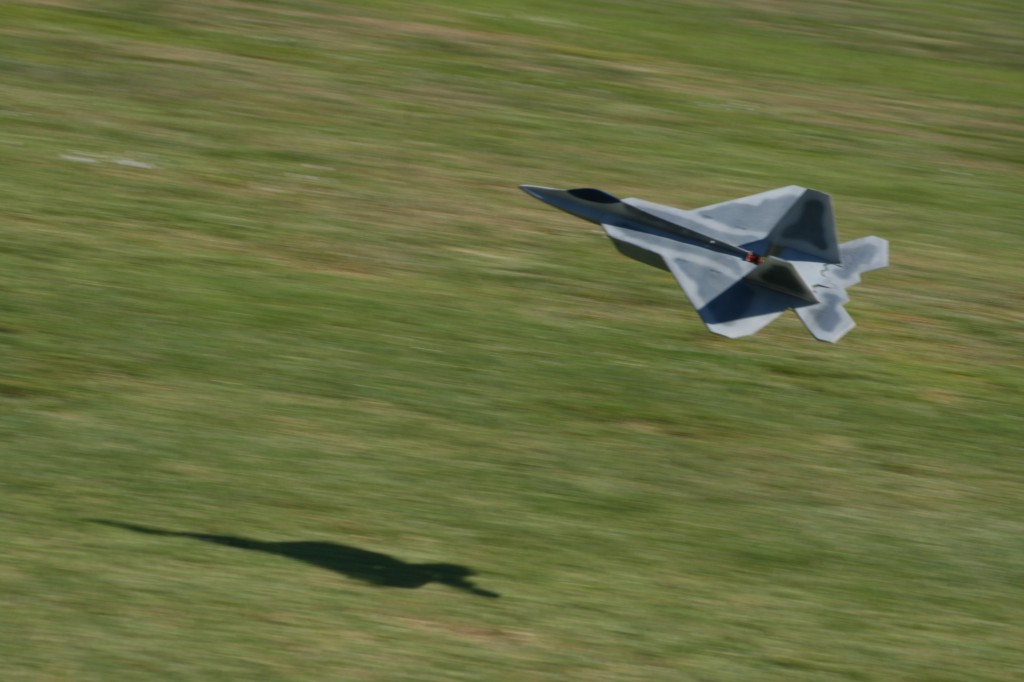 Well, the first flight was quite exciting. An underhand launch by Roger Niolet with the power off until his hand was clear of the prop worked well. It was all over the place but very entertaining for the gallery. Loops could be performed in the length of the F-22. With the control surfaces just behind the prop they perform like a vectored thrust system. I moved the pushrods in one more hole on the servo arms to 7/16”.  Controls were dialed down to a much milder high rate of 7/8” on both aileron and elevator and 5/8” each on low rate measured at the extreme aft edge of the control surface. On low rate any pilot should be able to fly either the F-22 or F-18. Dial it up or down from there to suit your desired performance. These are great little airplanes that are simple, inexpensive and perform very well, fun.

For more information, go to: http://zippkits.com/~zippkits/index.php?main_page=product_info&products_id=567