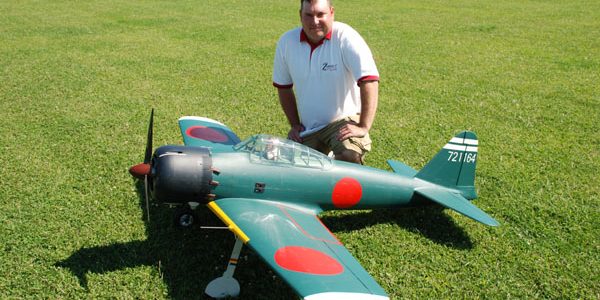 The popularity of giant scale WW2 RC warbirds is basically off the charts, and everyone views them as the top of the “Wow Factor” ladder. And when it comes to building and flying great performing giant scale warbirds, none come close to the well proven designs drawn and test flown by Nick Ziroli, (ziroligiantscaleplans.com) the godfather of RC giant scale.

Some experienced modelers however find it a little intimidating to make the step up to 100-inch-span warbirds. This article highlights exactly what’s involved in building, fitting out and flying a classic from the Ziroli hangar, the Japanese Zero Fighter. Of all the Ziroli warbirds, it is agreed by most that the Zero is an excellent choice for a first time build. It has relatively straightforward structure and construction,  has wide landing gear placement for great ground handling and landing and excellent flight performance. So let’s see what’s involved. 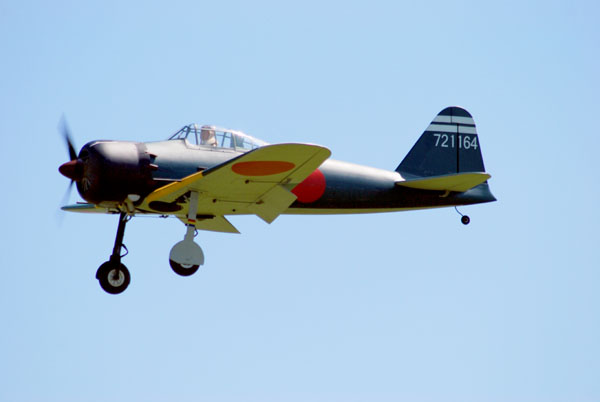 The best way to get started is with a set of plans, a fiberglass cowling and a plastic canopy from Nick Ziroli plans.  The plans have templates to cut all parts, but a wood kit is available from Precision Cut Kits (www.precisioncutkits.com) to save some time.  It is a good idea to have the landing gear you plan to use before you start the wing, and a set of Robart retracts and wheels are also available from Nick Ziroli Plans. 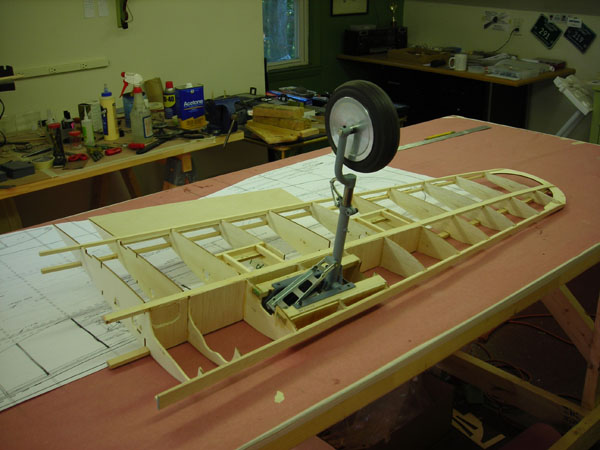 The wing is built in two halves over the plans and once the basic structure is complete, you join the two halves and start sheeting the structure. Install the gear blocks and the landing gear first so you can then establish the shape and size of the wheel-well openings.  Be sure to check the angles and the depth of the gear before you glue the blocks in. 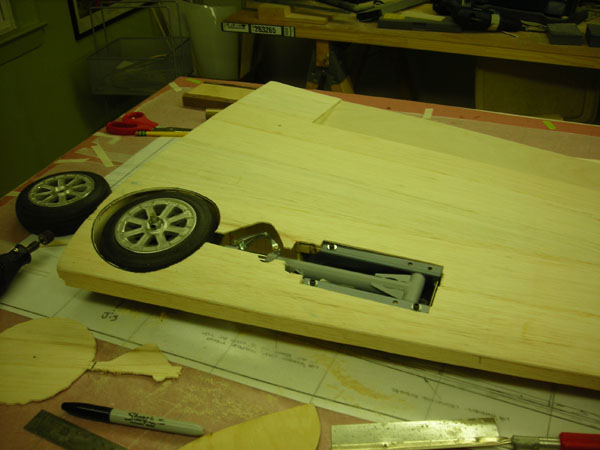 The wing skins are made by butt-gluing the balsa sheets together with pink (thin) ZAP CA glue. Glue the bottom sheets on using green (medium) ZAP and once the glue has dried, add the top skin sheets using yellow wood glue. Use what ever method you prefer but everything from pins, tape, and a stack of books can be used to hold the top sheets in place.  After the wing has been sheeted,set it aside.

The horizontal and vertical stabilizers are built over the plans and sheeted just like the wing. A hint here is to follow the sheeting direction shown on the plans. This gives you straight sheet edges along the leading and trailing edges with the angle cuts butted together over the main spars. After building all of the control surfaces set then aside also. 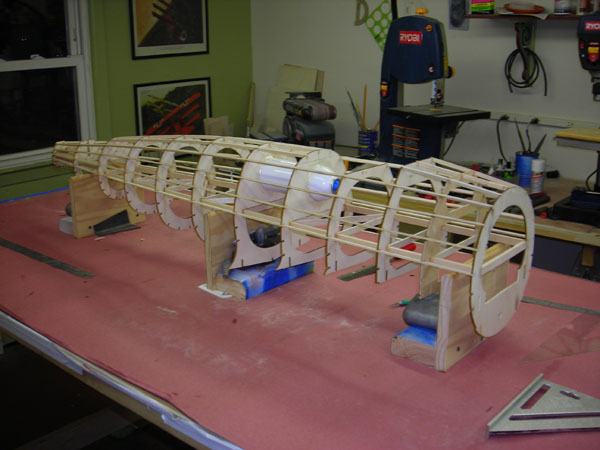 The fuselage is next, and you don’t have to worry about it being too hard to do. First you build a crutch structure over the plans and then slide the formers onto it. The crutch has to be raised up about five inches off the building board using blocks or boards.  Be sure everything is square and secure before you start gluing. Once the formers are in place, you start adding the stringers and the 1/8 balsa sheets.  Though the planking can be a little tedious, spending your time now making sure each piece fits properly, will save you effort later on using heavy filler material. 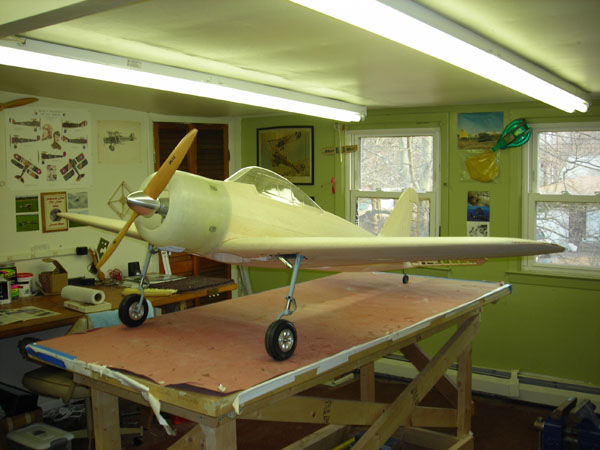 After the fuselage is almost completely sheeted, you can add the vertical and horizontal stabilizers. Sheeting is then pieced on and fitted into shape to support the tail feathers and then the sanding begins.  It’s really not as hard as it sounds, and is actually very rewarding to see  your Zero come to together and take shape. 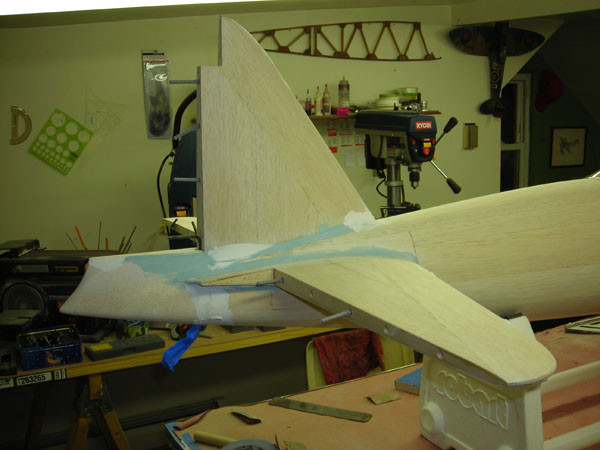 Although many engines around the 60cc size range would fly the Zero nicely, but this example is being powered by a 3W-75i with a rear induction carburetor. The engine mount box was modified and an airbox was added and integrated through the firewall and into the second former interlocking with the top and bottom formers. The airbox houses the carburetor which extends some four inches into the fuselage. 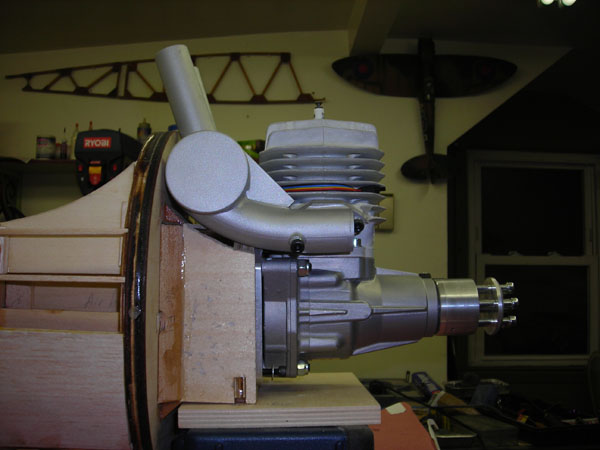 This also allows short precise linkages to operate the throttle and choke. A Pitts-style muffler fits nicely as well. The main idea here is that you can modify the model for the equipment you want and the staff at Nick Ziroli Plans are more than happy to help. 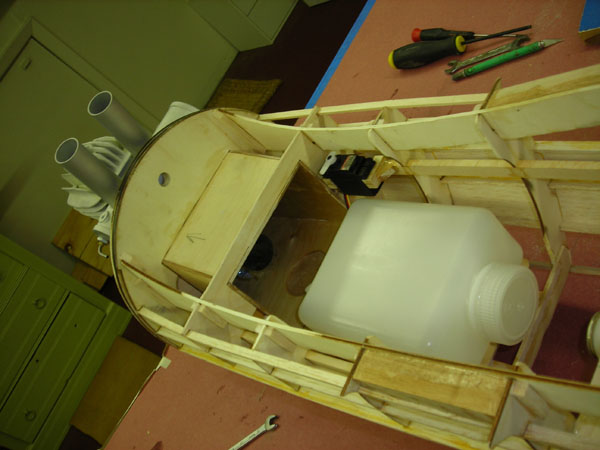 The usual 1-oz. fiberglass cloth and Pacer Z-Poxy finishing resin technique works great to finish any Ziroli warbird. Lay the cloth down doing one surface at a time, and apply the resin which should be thinned slightly with alcohol. Use a playing card or plastic squeeze to spread the resin and let dry. Then apply another coat of resin and let dry then use 150 grit sandpaper to smooth the surface. Apply more resin to any dry sports that may appear. 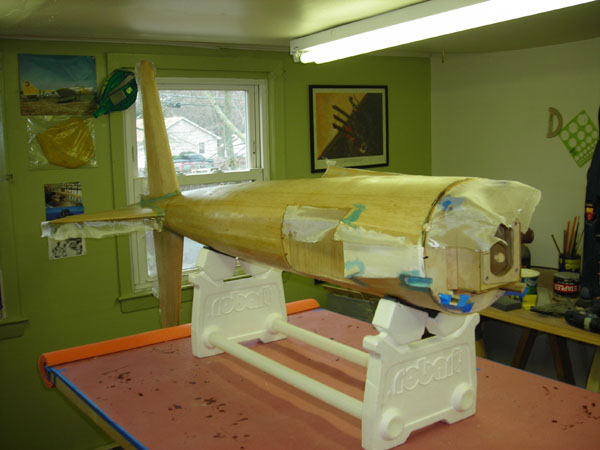 Apply two coats of filler primer with a foam brush and sanded most of it away. Spray the model with a good sandable automotive primer and when satisfied with the surfaces, it is ready to paint. If however, you want to go the extra mile, lay out the panel lines using drafting tape and spray primer over the tape.  After the prime was dry I pulled the tape away revealing your panel lines.  Be careful not to leave the tape on too long because the tape residue may be left behind.

The plans show all the detailed you need to install your equipment properly. Be sure to use good quality and servos that have at least 90 to 100 oz. torque ratings for your control surfaces. Use plywood to make solid and ridged mounting surfaces. 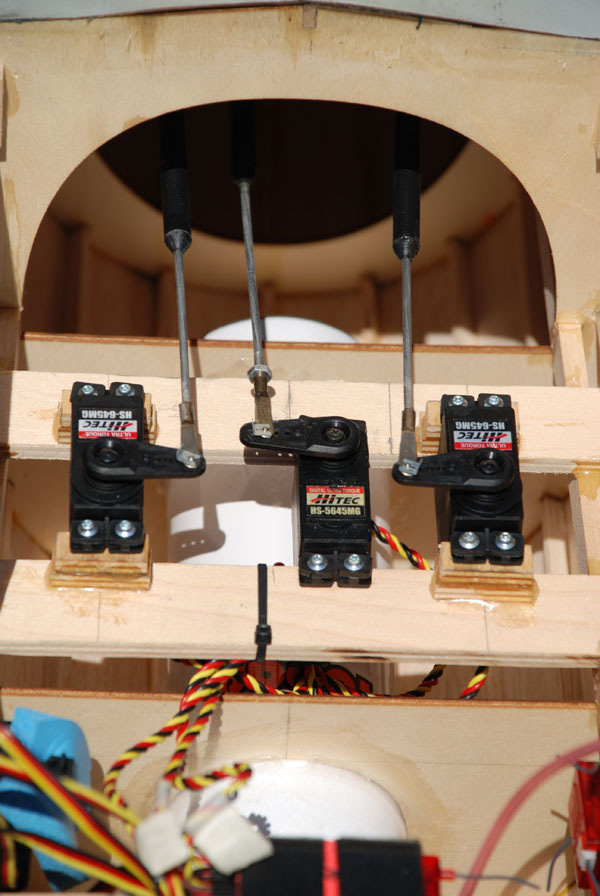 Be sure to wrap everything with foam padding so protect the receiver and other parts from engine vibration, and install the fuel tank so it can be serviced while minimizing movement. Heavy duty Velcro straps are good for this. 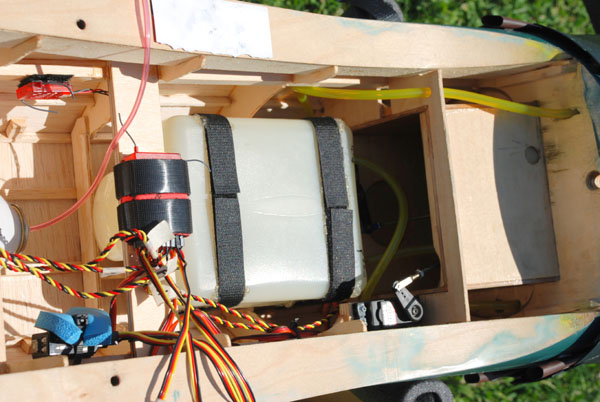 This Zero was painted custom-mixed KlassKote epoxy paints which is easy to use and produces a strong and smooth finish. All markings were painted using paint masks custom-made by Red5designs. 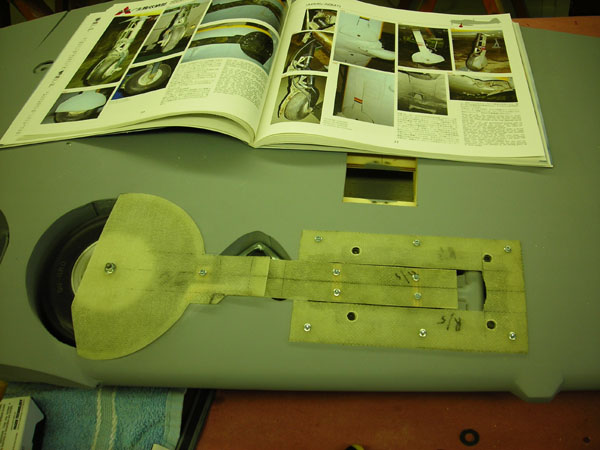 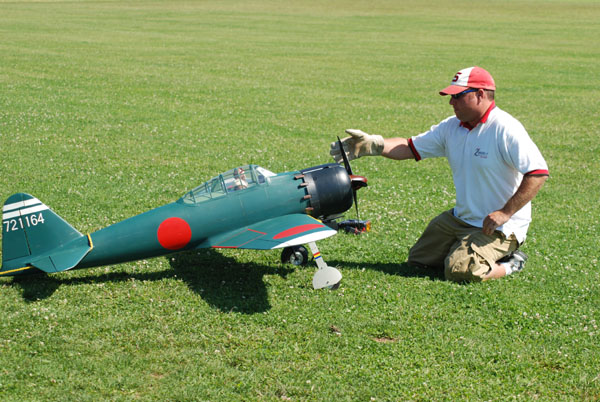 IN THE AIR (Report by Michael C. Gross)

After a year and half of building, I was ready to fly the Zero.  The first flight went well.  Takeoff requires a good amount of right rudder, and it is better to ease on the throttle to get her going straight.  Once airborne, I retracted the gear and pulled out will plenty of power from the 3W-75i.  I had to add about a ¼ inch of down elevator trim, but all the other controls were centered and the suggested throws worked well.  With the flaps fully extended, the model wanted to pitch up quite a bit.  I mixed some down elevator with the flaps and now it flies in a slight nose down attitude with full flaps.  The model performs all maneuvers well and makes impressive strafing runs over 120 mph.  The Zero lands very nice with the flaps and ground handling is excellent with the wide stance of the landing gear. 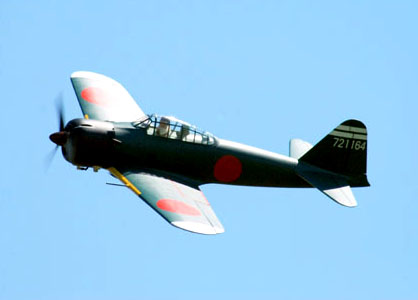 I have accumulated well over 100 flights with the Zero.  With only a few minor things to be tightened up and adjusted, it has been mostly problem free.  This project was well worth the time and effort.  It is quite exciting to fly a giant scale warbird in formation with three or four of your buddies at over 100 mph! 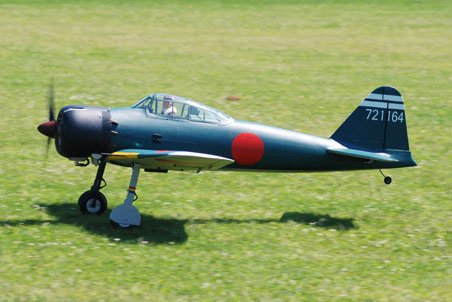