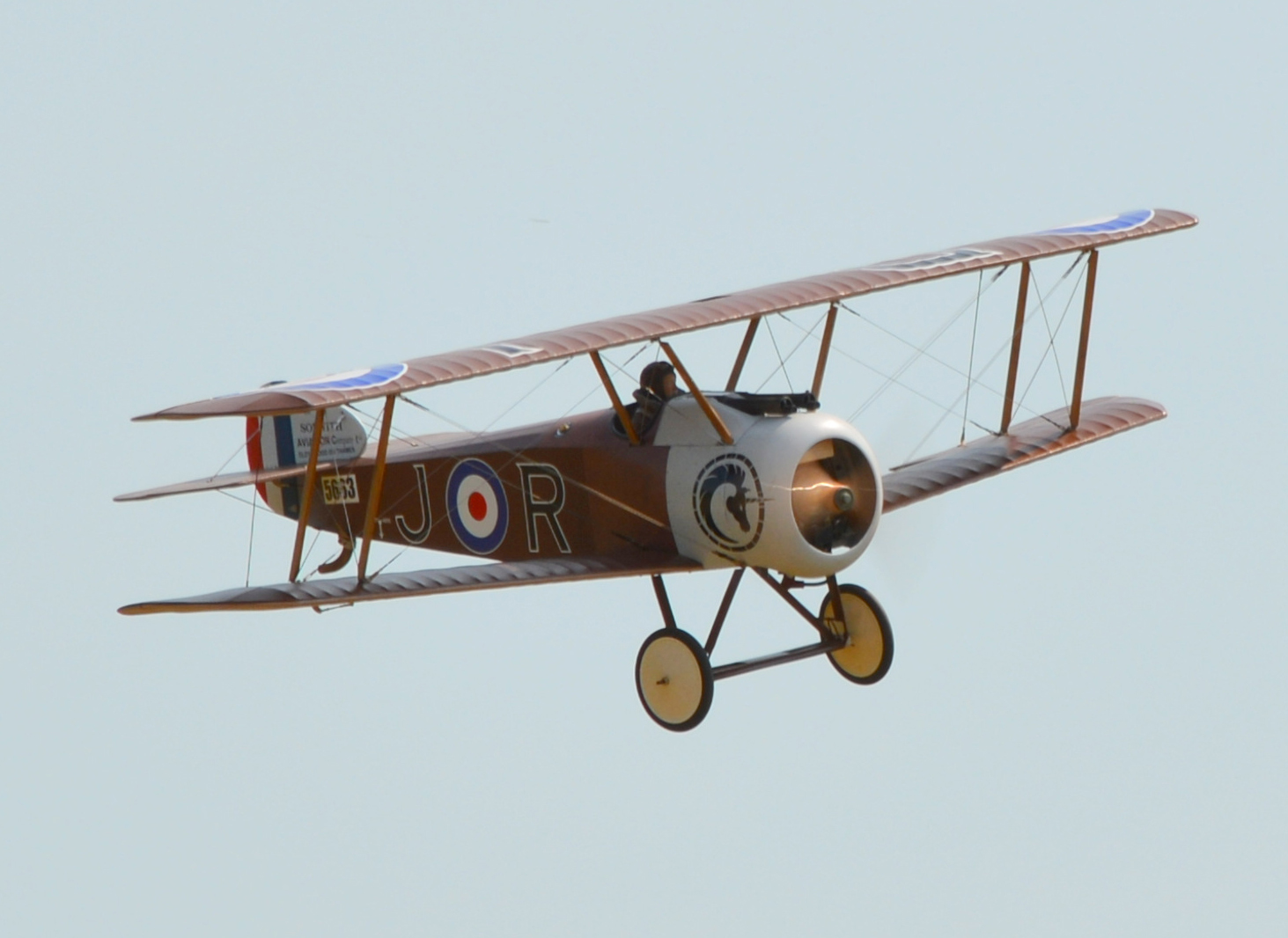 Well, it has been an active flying season so far and I have flown the Sopwith Camel several times including at the big Fun Fly on Father’s Day in Kingston, Ontario in June, at the recent Warbirds over Delaware in July, at our home field in Farmington, CT and at the Dawn Patrol event at the Long Island Sky Hawks field on Long Island in August! The last time I flew it however, the usually very reliable Zenoah G-38 gas engine started to make some weird clicking, rattling noises. I thought that it might have been just the hot weather and the engine running a little lean. I landed but could not find any obvious issues with the model. The next day I fired up the engine and right about mid throttle I heard the noise again! There was only a few weeks before the WW1 Jamboree at the Old Rhinebeck Aerodrome, (Sept. 11 – 13) so I made the decision to pull the engine and install a new G38. (You can’t have enough spare engines!) 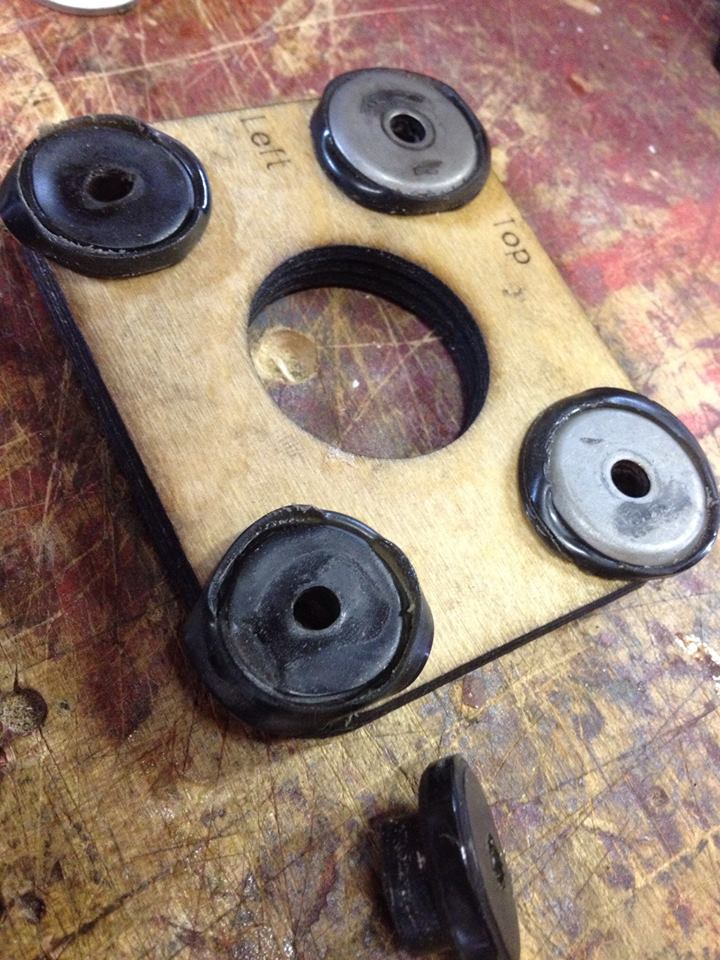 I cleaned off the model and unbolted the engine from the firewall. I found to my surprise that the lower soft mount rubber bolt isolators had actually melted (Softened) and were deformed. Actually, all four isolators were compromised. The G-38 is a rear exhaust engine and I have a large volume muffler just 3/4 inches from the lower isolators. I was amazed, not only were the isolators deformed, they were also much more soft than normal and the holes had enlarged allowing the attachment bolts to move. I could easily turn the lock nuts with little effort! So off with the old hardware and in with the new.

First, I pulled out the new replacement engine and gave it a quick run on my test rig to make sure it was in working order. Ever notice how nice a new engine out of the box smells!? 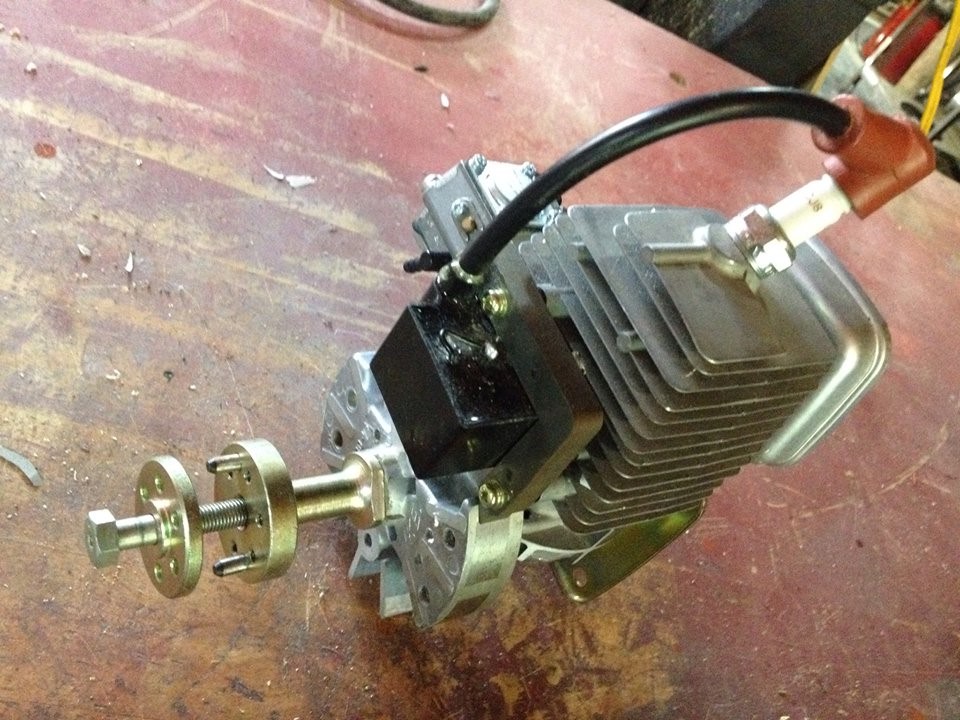 I removed the soft mounts and also made some new engine spacers to push the entire engine about 1/2 inch forward to increase the tight propeller to cowling spacing. I then swapped out the aluminum mount plate, carburetor and the muffler from the older engine. 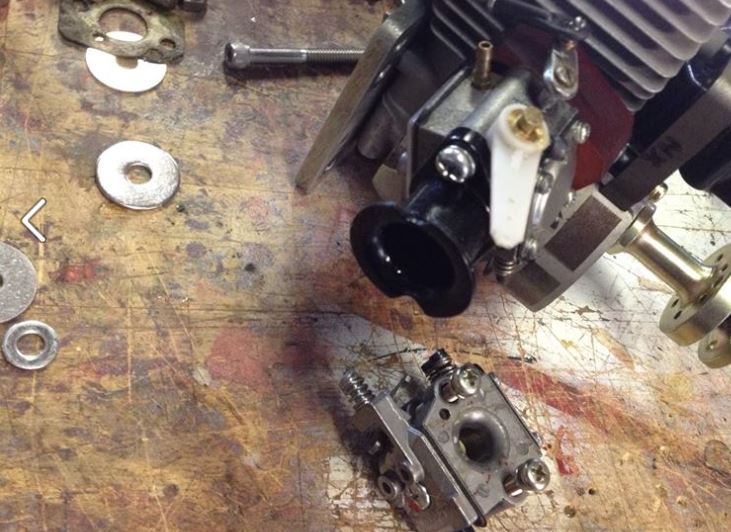 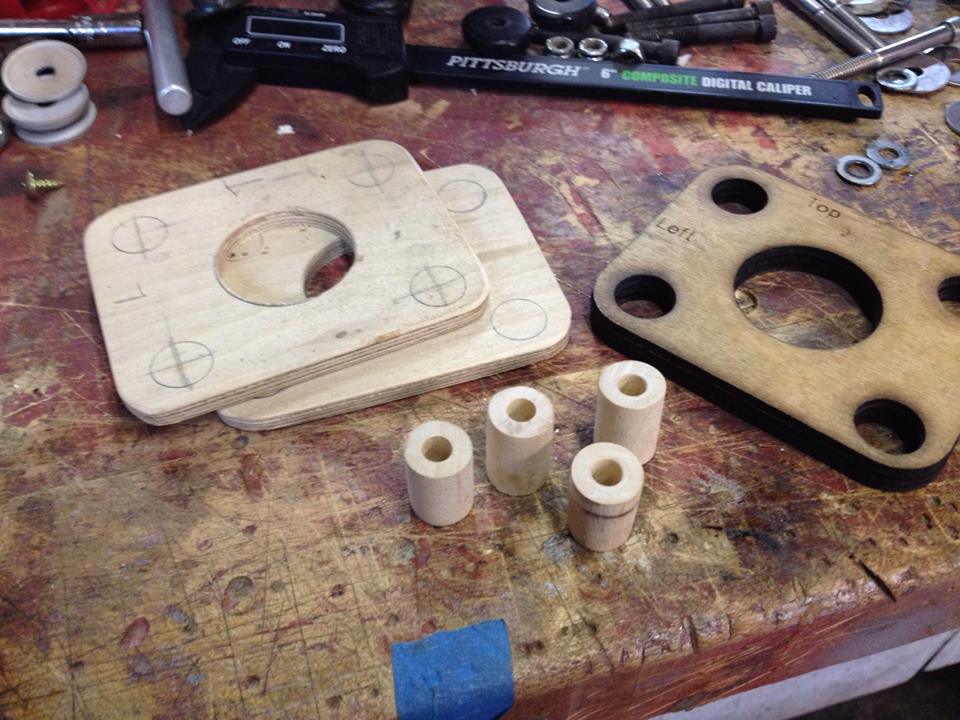 So, to replace the isolators I went back to a hard-mount setup and used 5/8-inch hardwood dowels to fill the holes in the firewall and plywood soft mount plate block. Shown here also are the two 1/4 inch spacer blocks made from plywood. I drilled the 1/4 inch holes in the dowels with them chucked in my lathe so the holes would run true through the 1-inch length of the dowels. 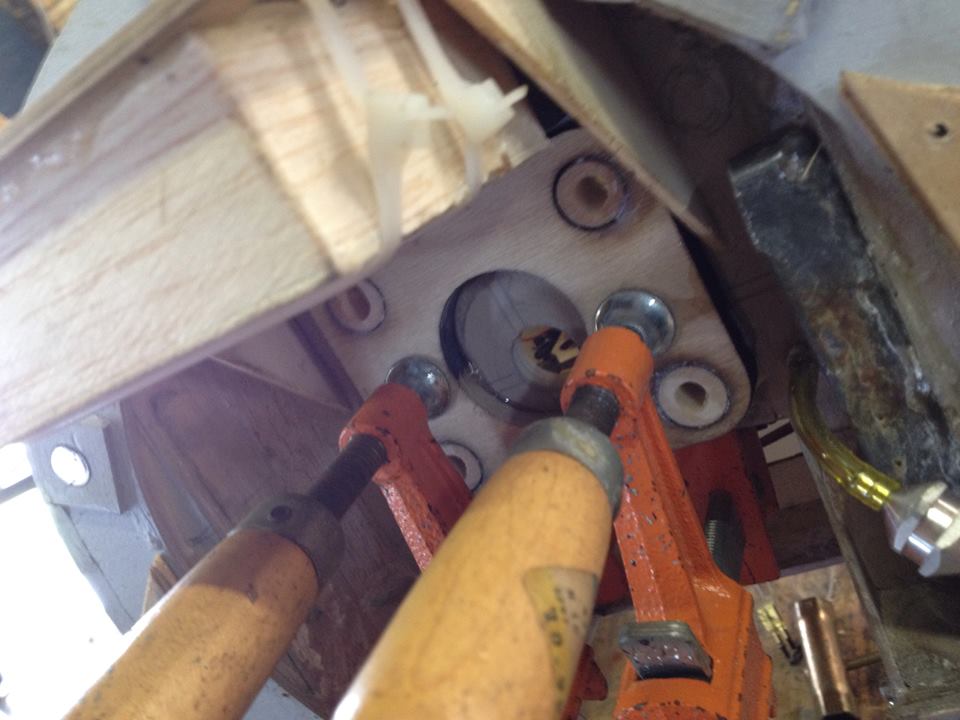 Using bar clamps and some 15 minute Z-Poxy I glued the dowels and the mount plate back into place on and through the firewall. 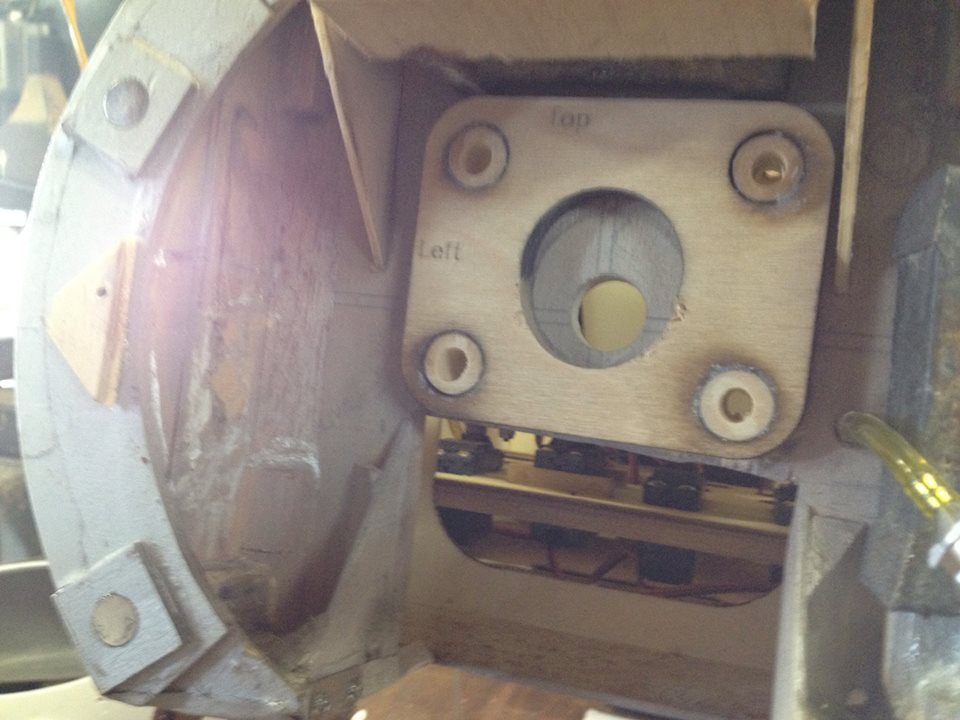 Here’s the new firewall setup. I then bolted the new G38 into place with the plywood spacers between the engine and the mount plate. With the spacer plates added I also had to make a new throttle linkage pushrod which took about 10 minutes using a threaded 4-40 pushrod wire, a brass threaded coupler and two Du-Bro ball-link clevises. 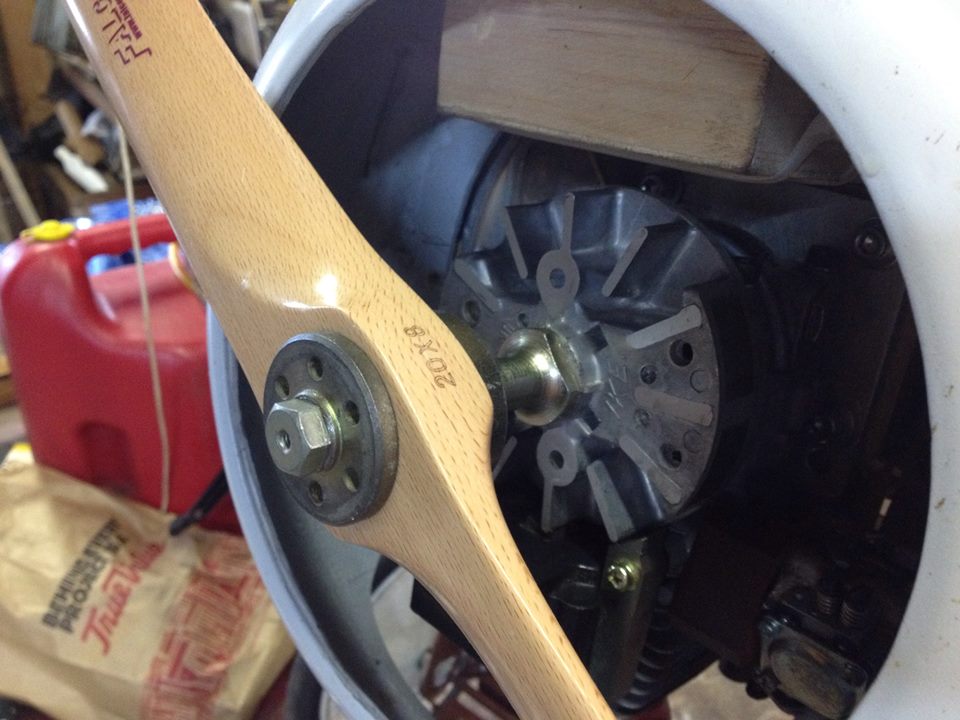 While I was at it, I also switched from the 18×8 propeller size I was running to the 20×0 Xoar prop shown here. This increases the prop disk by almost 60 square inches and helps load the engine better than before. Most of my WW1 flying buddies had recommended me switch to the next size bigger prop as the old engine was revving too high.

The bolt hole in the 20×8 propeller is larger than in the 18×8 propeller, so I used some aluminum heater duct tape to shim the attachment bolt to the correct size. My test run proved to have eliminated the alarming engine noise and I am now ready to do some dogfighting at the Old Rhinebeck Aerodrome! 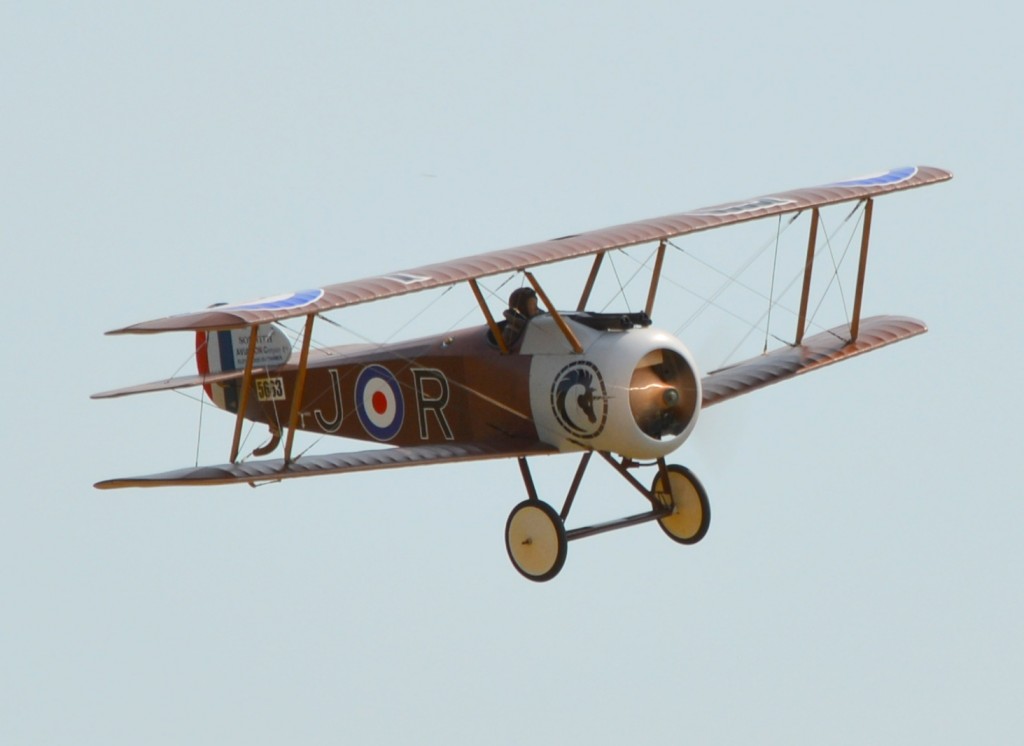 The basic numbers for the new engine installation are a nice improvement. The 18×8 propeller was indeed revving a bit too high at 7,300 rpm and the idle was about 1,900 to 2,000, very reliable. The new Xoar 20×8 propeller loads the G38 at full power to 6,900 rpm which is only a 400 rev lose from the smaller propeller. considering that the G-38 produces its max torque output at 5,040rpm, (from a Mike Billinton engine review in MAN/April 1994 issue), the new prop is a lot closer to the proper power band. And the idle is now at a solid 1,700 rpm. Also, I reworked the throttle linkage so it is very linear throughout the full throttle stick travel. Test flight was very rewarding with a better takeoff performance and a lower throttle setting for cruise. Landings seem to be about the same but there is still a need to keep in about 1/4 throttle for the final approach.

As for the old engine, I will test run it on the stand with a solid mount and see if the noise is still there. If not, then this engine will be ready for a new airframe!

Can’t wait to see you all at the Rhinebeck Jamboree!