By now most people have been exposed to some form of night flying with RC planes. But up until just recently, you had to add lights to your existing plane. With a new form to answer this call for RC night vision, ParkZone has introduced their Night Vapor. Like the original ParkZone Vapor, the Night Vapor is a slow indoor/calm outdoor flyer that you can commit aviation with almost anywhere. With awesome slow flight performance the addition of LED lights allow you to have even more fun after dark. The Night Vapor features a modular so switching out broken parts (should you manage to damage something,) is very quick and ease. For this review we flew the BNF (Bind-n-Fly) version and it takes only a minute to get it ready to fly. The BNF version is compatible with any JR and Spektrum DSM2 aircraft transmitter and I bound the test Night Vapor to the transmitter that came with my Force Micro Combat Heli. This transmitter also has a built in lipo battery charger so it is very convenient to use. 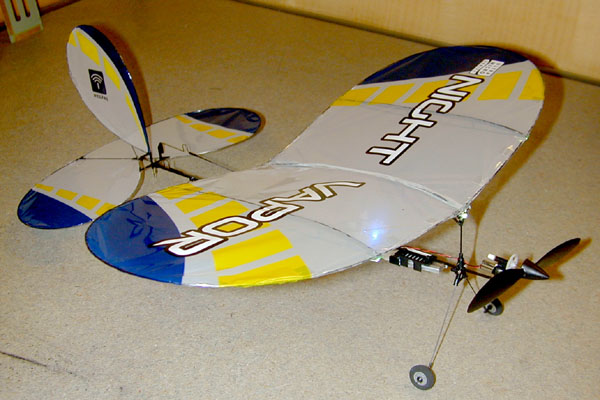 This is a true RTF and there is no gluing, painting or assembly required. Just charge the battery, bind the plane to your transmitter (with the BHF version,) and you are good to go. The Night Vapor comes with high intensity multi-colored LED lights already installed and they come on when you plug in the onboard flight pack. The removable landing gear is also handy if you want to fly outside. Nothing to snag on landing minimizes the possibility of ground damage. Just throttle it back and plop it into some tall grass. It is a true 3-channel setup with proportional control of throttle, rudder and elevator for precise flight performance and maneuverability. The BNF version comes with everything needed except for the transmitter, and the RTF comes with everything including at DSM2 2.4GHz transmitter. 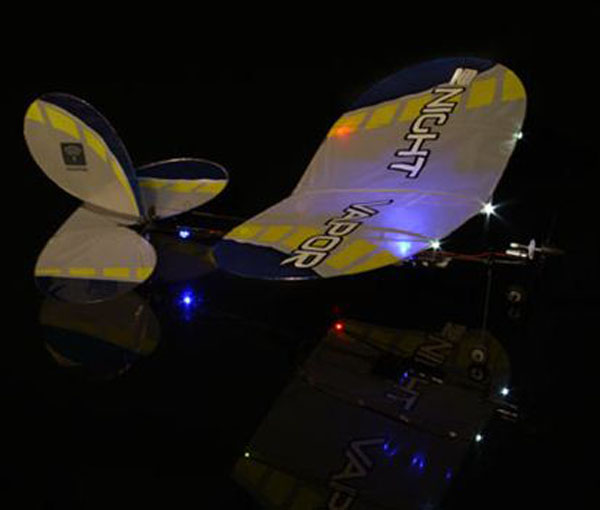 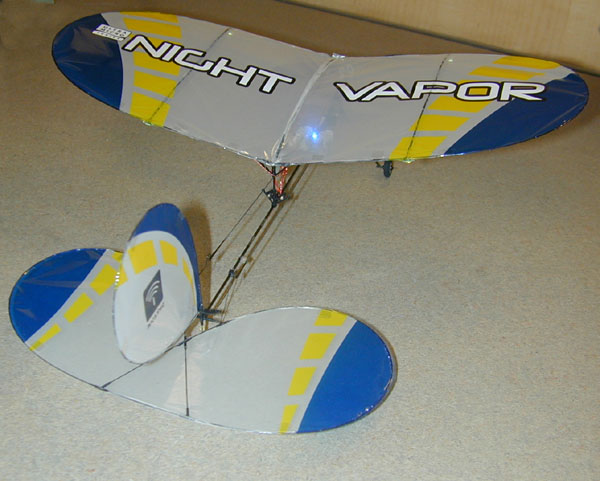 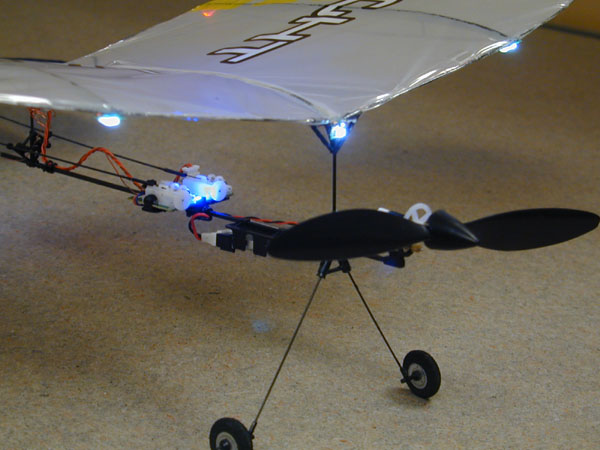 Just like the earlier Vapor, the Night Vapor’s lightweight carbon fuselage, tail and wing structures, make it surprisingly stout despite its delicate appearance. Add to this the extremely lightweight covering film that’s transparent, the Night Vapor is certainly going to be one of the lightest airplanes you’ll ever fly— it tips the gram scale at just about a half ounce ready to fly.

As for a recommended flying area, you’ll want a space about 20 x 20 feet and with a high ceiling at least 8 to 10 feet high. Any middle school’s gymnasium will be more than big enough. If it is calm with no wind conditions outside, your typical school parking lot will be great! It’s smooth paved surface will allow ROG (rise off ground) takeoffs but for a soccer field, a hand launch toss will do just fine.

The Night Vapor is an all-around fun to fly airplane and there’s a whole new experience waiting for you when the sun goes down. Inside with the lights off or outside after dusk, the included LEDs really make it easy to fly your plane.

Tracking: The rudder is very effective and turns are smooth and steady.

Aerobatics: Loops, zooms and spins can all be done without much effort. But really this is a calm weather, have-fun-watching-it-fly-by kind of plane! Its slow speed performance allows you to make tight maneuvers in the smallest spaces. You can chase your own tail above the dining room table without hitting the walls!

Stall: No issues here, Power on the plane climbs, power off, it descends. Keep a little power on especially in turns and you won’t be surprised! 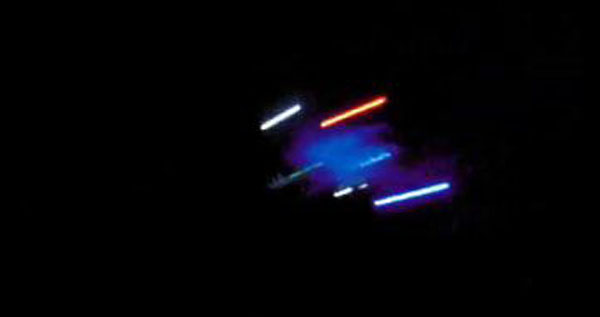 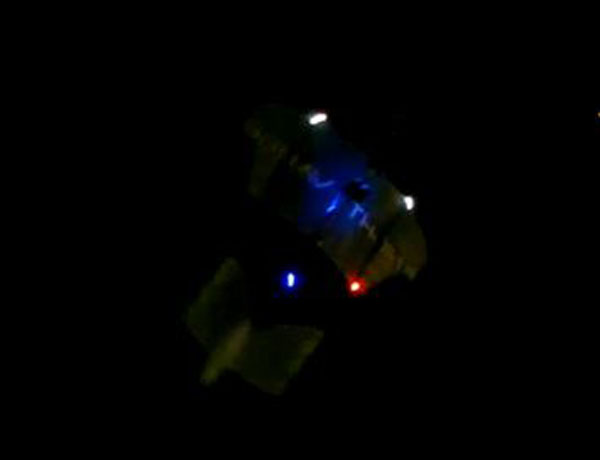 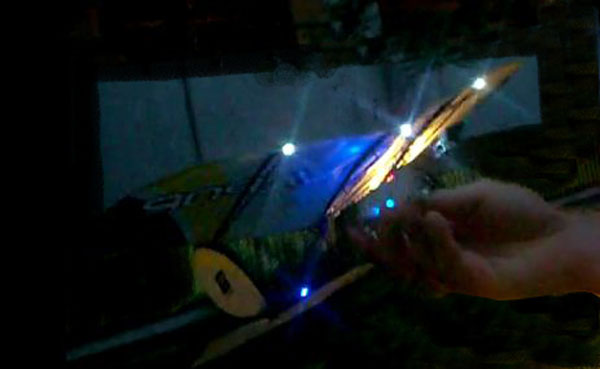 Grab a bunch of Glow Sticks and turn off the lights! You can have a lot of fun with this plane in a school Gym or even your family room. Get some glow-in-the-dark hula hoops and setup an aerial obstacle course. Outside, bring some glow sticks and a flashlight, charge up a few extra battery packs and head to a local park, ball field or even your driveway. Man flying the Night Vapor is as much fun as anyone could want! Maybe even more when the sun goes down! 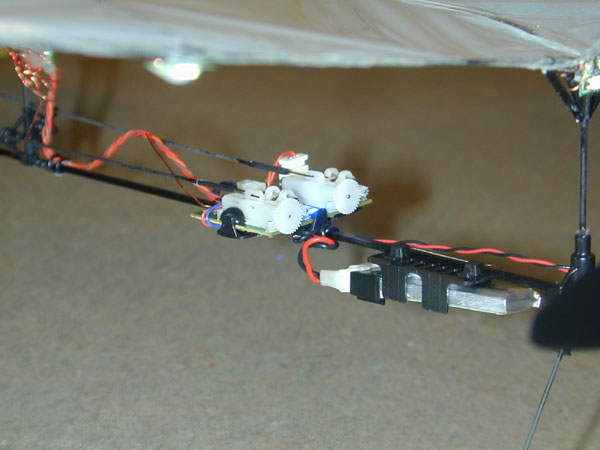 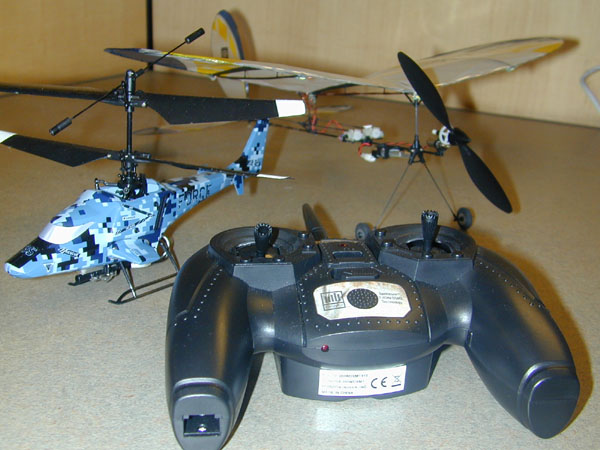 (Left) Close-up of the servos and the lipo flight pack. (Right) I bound my Night Vapor to the transmitter for my Force Micro Combat indoor heli.