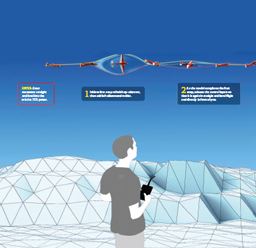 If you have an aerobat with large control surfaces and you want to perform precise figures with the utmost consistency, you must take advantage of dual, or triple, flight rates. It is difficult to fly precision maneuvers when there’s too much control surface deflection.

I prefer to use a three-position flight mode where all rates for all control surfaces are found on a single switch. One rate is for rolling figures and general precision aerobatic maneuvers, the second rate is for snap rolls and spins, and the third is typically used for 3D flight. Given the fact that the maneuver of the month is not a 3D maneuver, maximum rates are not required.

For this figure, a maximum of 35 degrees of control-surface deflection will be required for aileron, 20 degrees for elevator, and 35 degrees for rudder. On this rate, a great starting point for exponential is about 40% (this value will either be positive or negative, depending on the radio manufacturer). Adding exponential will soften how the airplane responds to certain control inputs around neutral, but you can achieve maximum travel by moving the control stick the maximum amount. While different pilots typically prefer different aircraft setups, the professional pilot will agree that time, patience, and proper flight techniques are required to find the best balance of exponential and control-surface deflection.

For the first few attempts, always perform this figure parallel to the runway, into the wind, and at a distance of about 300 feet for a 60-inch-span aircraft. A generous altitude will also help if you lose orientation, so you can always abort the maneuver by neutralizing the control sticks, seeing the orientation of the model, and applying corrective roll and pitch inputs to orient the aircraft in upright level flight. Equally important, keep a fair amount of distance between you and the aircraft; if you fly too close to yourself, you won’t be able to see the entire figure and apply corrective inputs.

IF THE MANEUVER IS PERFORMED TOO SLOWLY, THE AIRCRAFT WILL TUMBLE THROUGH THE SNAP ROLL, AND IT WILL BE DIFFICULT TO CONTROL ALTITUDE AND HEADING.

The figure of the month is centered on the pilot, which means that the halfway point for the maneuver is the brief line segment between the two snap rolls. With that said, the first snap roll will need to occur just seconds before the aircraft approaches the pilot so that the snap roll is complete and so that the second snap roll can occur right after passing the pilot.

The moment that you will need to initiate the snap roll will vary depending on the rotation rate of the aircraft. Typical snap-roll rates, however, will require you to initiate the first snap roll about three seconds before the airplane approaches you. Apply up-elevator to initiate the maneuver and stall the aircraft. Then, apply left aileron and left rudder. Release inputs as the first rotation is complete; at that point, the airplane should be directly in front of you. Once complete, it is time to perform another snap roll but in the opposite direction. Again, apply up-elevator input but, this time, followed by right aileron and right rudder input.

STEP 1. For the first attempt, begin by lining up the aircraft to the runway traveling level, upright, and into the wind at a fairly high altitude. Because the example illustration is flown from left to right, orient the model and apply 75% throttle. As the aircraft approaches you, initiate the snap roll by applying up-elevator to initiate the maneuver and stall the aircraft. Then apply left aileron and left rudder.

STEP 4. Again, control inputs should be held until the rotation is complete. Throttle use is important as it controls the airspeed of the aircraft. If the maneuver is performed too slowly, the aircraft will tumble through the snap roll, and it will be difficult to control altitude and heading. Once the rotation is complete, prepare to align the model and give this maneuver another try.

Some pilots prefer to roll only one direction. Being proficient in performing a snap roll (or a standard roll) in both directions, however, not only is mandatory for the competition aerobatic scene but also will make you a better pilot. With time, maneuvers like the positive snap roll in opposite directions will become second nature. Remember, while airframes all differ to some degree, programming concepts remain the same. Always take advantage of the various capabilities that your radio system offers so that you can tune the aircraft to your personal preferences. Above all else, though, remember to have fun!