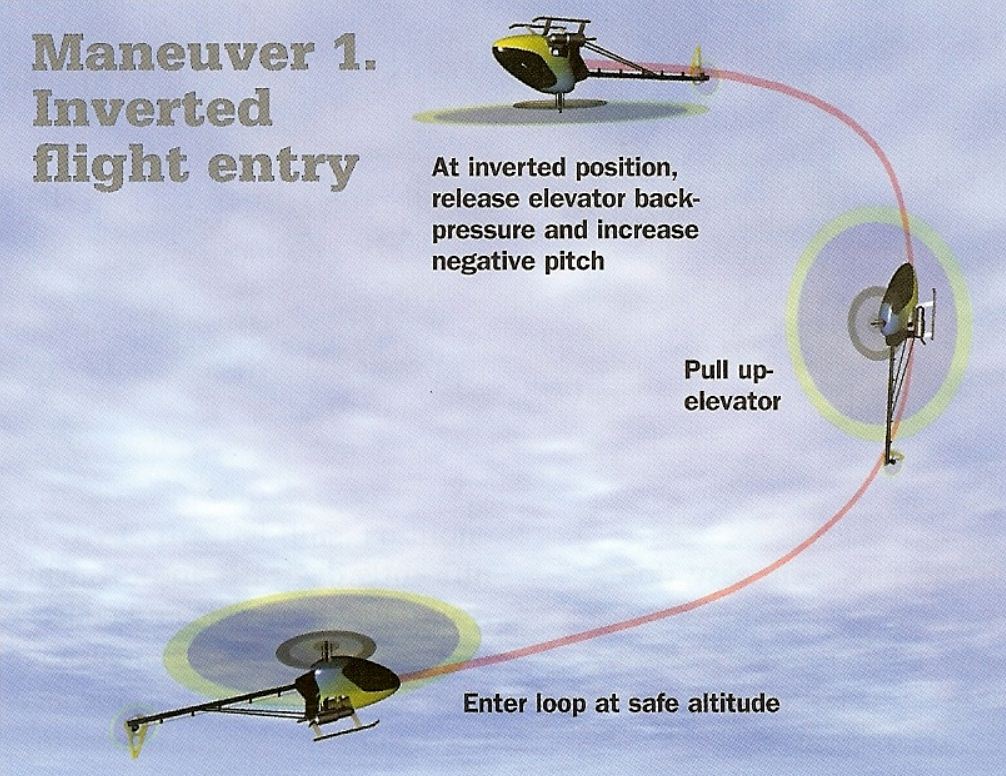 The safest way of entering your first inverted flight is by trying to stop your heli while it’s inverted at the top of a loop. Enter the loop at a nice comfortable height, and when the heli reaches the inverted stage, release the elevator back to neutral and increase negative pitch to hold it inverted. Hold it here for a few seconds until it starts to drift or you become uncomfortable; then ease back on the elevator and continue on with the loop. The aim of these first attempts is to get the hang of the cyclic controls.

Continue to try to hold it at the top of loops. Make small stick movements to understand orientation. If the heli starts moving toward you nose-in, push the elevator stick a little; if it moves sideways, correct it as you would if it was nose-in.

Check your inverted climbout ability by adding some negative pitch to try and gauge how quickly the model will climb out. This will ensure that if you get into truoble, you’ll have enough negative pitch to climb out to safety. If you’re afraid to stop the model, just release the up-elevator at the top of the loop while moving the pitch to a few degrees of negative. you will then be flying forwards while inverted. If the model starts to drop, add some negative pitch. If you aren’t sure of which way to move the stick, resort to your “bailout” move.

What’s a “bailout” move? it’s something you should plan before you try any new maneuver. For this inverted hover or flight at the top of a loop, your bailout move is up-elevator. Unless you’ve lose considerable altitude, up-elevator will quickly flip the model upright to a comfortable orientation.

When you can maintain a stable inverted hover and move from one place to the next confidently, start reducing altitude a little with each flight until you are hovering at your usual level. As you reduce your altitude, your bailout move will need to change from up-elevator and slight negative pitch to down-elevaotr and full negative pitch until it’s upright.

I suggest that you start your inverted flight by making straight “passes” from side to side in front of you. When you are comfortable with this, add inverted turns to complete a circuit.

Just as you did with the inverted hover, start inverted forward flight from the top of a slow loop. Don’t build up too much speed; take everything slowly. As the heli comes over the top inverted, slowly apply some forward elevator and some negative pitch so that it continues straight in forward flight. Don’t give too much elevator or pitch, or the heli will stop and start flying backward; too much negative pitch, and it will pick up speed faster than you’ve ever seen!

Let the model fly past you until you feel comfortable transitioning back to upright flight. Do this by pushing forward on the elevator with some negative pitch to create a forward flip. You’ll also gain altitude. If you’re uncomfortable, down-elevator and negative pitch is also the bailout move to get yourself out of inverted flight.

ADD TURNS TO CREATE A CIRCUIT

Now it’s time to start adding some turns to make a complete circuit. The issues here are timing the rudder with the aileron and elevator. When you make a right-hand turn, you add some right aileron, some left rudder and a little forward elevator to bring the nose around. The aileron and rudder work on the “together/apart” rule” if the aileron moves toward the center of the radio, so does the ruder. If the aileron moves to the outside of the transmitter, so does the rudder.

Enter inverted forward flight in the same way as you did before, and as the heli flies past you from right to left, start executing a right-hand turn by adding a little right aileron and a little left rudder. As the heli begins to turn, add a little forward elevator to stop it from diving. Continue to hold this in as the heli turns, making small movements. As the heli completes the turn and begins to head back down the path it came from, let it continue for a while and then either forward flip out of inverted or aileron roll out to upright. Complete this maneuver again and again until you’re comfortable making banking turns. Make both left- and right-hand turns as well as nose-in and tail-in turns.