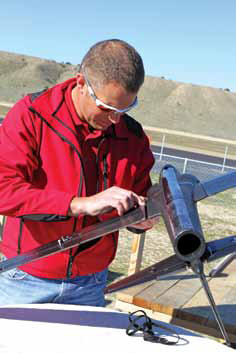 I recently had the fortune of becoming a contributing writer for Model Airplane News and Electric Flight, so I figured I’d tell you a little about myself. I was born and raised in the Swiss Alps and moved to the Houston area with my family in 1980. I’ve always had a love for aviation, and like many kids, started out building plastic models at an early age. This progressed to stick-and-tissue free flight models, which were flown in meadows or off of mountain slopes (and never to be seen again!). Once in the U.S., I built my first radio control model, a Balsa USA Nomad sailplane. I was hooked for life from that point on and over the last 30-some years have built almost every type of model imaginable, be it land, sea or air (yes, even a blimp). I still enjoy the actual building of models tremendously. My original plan after graduating high school was to attend flight school, but my other love, bicycle racing, took me to Boulder, CO, where I also met my wife. After several years of racing with plans of turning pro, an injury forced me to quit and in the early 1990s we moved to the Chicago area. There I became heavily involved in soaring and even served as president of S.O.A.R. for several years. In 2001, I returned to bicycle racing and RC took a backseat for a few years. In 2006, I finally fulfilled my childhood dream and started to fly from inside the plane by becoming an airline pilot. Currently, I’m a first officer with ExpressJet Airlines (aka Continental/United Express) and live in the mountains of Southern California with my wife.