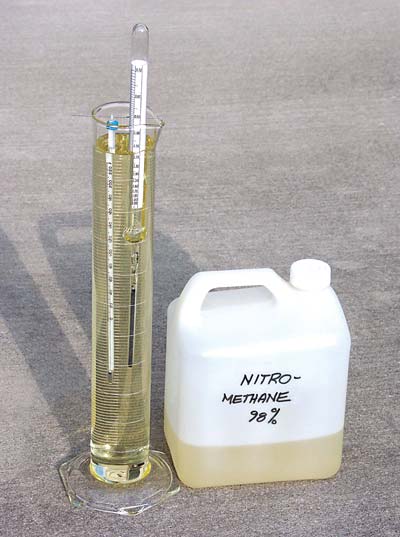 The Dooling Brothers reported a 1,500rpm increase in shaft speed when using Arden’s Formula B compared with the standard mix of methanol and castor oil. The engine, a .61ci-displacement, single cylinder unit, produced 1.5 bhp at 15,600rpm on the methanol/castor oil fuel; since the engine speeded-up to 17,100rpm with the same propeller, we can determine the new power output by using Power Factor calculations:

Internal combustion engine enthusiasts often struggle to understand why fuels such as nitromethane produce more power than other fuels, such as gasoline, which has almost four times more heating value (19,000 btu/lb. vs. 4,850 btu/lb.). The question is best approached from the perspective of specific energy (SE). A fuel’s specific energy is calculated by dividing its heating value by its air/fuel ratio (btu/lb. ÷ A/F). The result represents the fuel’s heat energy delivered per pound of air inducted into the engine. To demonstrate the value of specific energy calculations, notice that nitromethane has 217% more SE than gasoline at their peak-power air/fuel ratios (4850 – 1532) ÷ 1532 = 2.17. In Chart A, nitromethane is compared to both gasoline and methanol.

Like methanol, nitromethane is a substituted methane hydrocarbon (CH4), where a nitro group replaces one hydrogen atom (CH3NO2). Chemists refer to nitro (like methanol) as a partially oxidized fuel; the nitro molecule contains 52.2 percent oxygen by weight; methanol is 49.9 percent. At first glance, the two fuels appear to be about equal in terms of oxygen content. A closer examination reveals a different situation: the nitromethane molecule is 1.43 times denser than the methanol molecule (9.48 lb./gal ÷ 6.63 lb./gal = 1.43). When molecular densities are taken into consideration, nitromethane’s molecule is found to contain almost 50 percent more oxygen by weight than methanol; this explains why more nitro needs to be added to the engine’s inducted air at peak power air/fuel ratios than other fuels. Here are the calculations:

The balanced equation for nitromethane at its stoichiometric air/fuel ratio is: 4CH3NO2 + 3O2 → 4CO2 + 6H2O + 2N2. There are 12 moles of product and 7 moles of reactants from the above equation, forming a ratio of 12:7 (12-7) ÷7 = 0.71, or 71% more products than reactants. Compare this to methanol’s stoichiometric products/reactants ratio, which has only 20% more products than reactants, an indication of nitro’s potency.

Top-Fuel and Funny Cars never operate at (or near) stoichiometric air/fuel ratios; engine temperatures would climb beyond the melting point of its components. As the nitromethane mixture is richened toward its peak power air/fuel ratio, new combustion products are formed by dissociation, changing the products/reactants ratio for the better (e.g., at a
n air/fuel ratio of 1.13:1, nitro begins producing carbon monoxide [CO] in addition to CO2, H2O, and N2); this raises the molar ratio to 2:1 (100% more products than reactants). Further richening nitro’s mixture ratio to 0.75:1 produces another new product: hydrogen (H2); in this case, the molar products/reactants ratio improves to 18:8 (125% more products than reactants), almost four times that of methanol at its peak power air/fuel ratio (33% more products than reactants). If pure (neat) nitromethane is richened to the point where no inducted air is used on the reactants side of the molar product’s/reactant’s ratio (24:8 = 2.00 or 200% more products than reactants), it still might burn, much as it does inside the combustion chamber of a monopropellant rocket engine. This is why Top Fuel and Funny Cars shut-off the fuel as well as the ignition at the end of each pass; otherwise, the engine often refuses to stop running. Large molar product/reactant ratios, coupled with an extremely high specific energy, make nitromethane a powerful and unique fuel.

Contrary to popular belief nitromethane (theoretically) has an engine-cooling advantage over other fuels due to two factors: its fuel rich air/fuel ratio and its latent heat of vaporization. Latent heat of vaporization is defined as the amount of heat energy required for a substance to change state; in this case, from a liquid (at its boiling point temperature) to a gas. Although methanol requires more heat per pound to vaporize (472 to 258 Btu/lb.), nitro’s high fuel flow rate more than compensates. When these two factors are taken into account, nitro’s cooling effect is about twice that of methanol. See Chart B.

Unfortunately, only a small percentage of nitro’s vaporization-cooling potential is ever realized. In comparison, removing heat from a liquid without changing state is known as sensible heat, and is many times less effective than latent heat for any given liquid. In drag racing, where extremely rich, near-neat nitromethane mixtures are used to control combustion temperatures and detonation, vaporization cooling is ignored, thrown to the wolves. Only part of nitromethane’s fuel charge is atomized (a liquid that has been broken into small particles), let alone vaporized in its flood-like rush to the combustion chamber and beyond. Conduction, a sensible heat removal process, provides most of the cooling between the engine’s components and the liquid nitro.