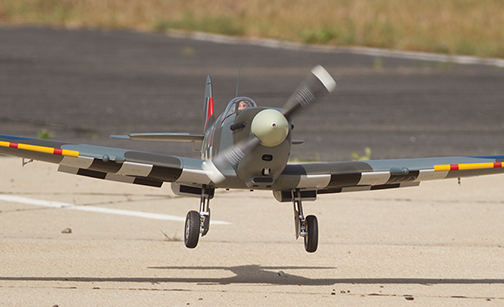 Someone told me once that landing is the only maneuver that we fly that is absolutely mandatory. If you think about it, this makes complete sense. We don’t have to take off, but once we do, the only thing that we must do is land! So, once you have takeoff down, it’s a good idea to make sure you are 100% competent in landing.

The tricky part about landing is the fact that you will be flying so close to stall. Unlike full-scale pilots, we do not have an airspeed indicator and the connection to the plane that allows us to feel the stall. However, to me, landing a model aircraft is still very much a “by feel” thing. We just feel the stall in a different sense. The way we feel it is in our thumb that is on the stick that controls the elevator. As our model flies slower, the wing will need a higher angle of attack to maintain altitude. Therefore, while you are setting up for landing, if you suddenly have a need to add more and more elevator to maintain your altitude, it is time to add throttle to avoid the impending stall.

Now, let’s talk about the hardest concept to grasp. When flying a model airplane, especially during landing, the concept is this: elevator controls speed, while throttle controls rate of descent/ascent. Most people believe the opposite to be true. This is painfully obvious when you are flying close to the ground and you run out of up-elevator and your plane comes crashing to the ground. The biggest mistake people make is using elevator alone to try to maintain their descent to landing. Instead you want to use throttle to slow your descent and avoid contact with the ground and elevator to slow the plane down, as it gets closer to touchdown. 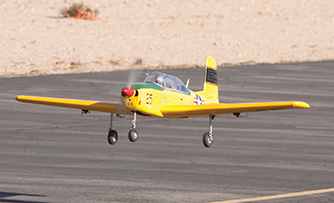 With a tricycle gear you can afford to bring the nose a little higher without worrying about losing control of the model once on the ground. We will try to cover this in a future article.

MAKING LIFE EASIER
Landing at different fields can add to the complexity of landing a “difficult” model. When you are landing a model that you need to focus on flying, you will want to lighten the load wherever you can. Here are a few things that I use to make things easier on my brain. The first things that I like to utilize are landmarks. When I first arrive at a new field I will take a few minutes to scan the area and look for visual landmarks. Some of my favorites are peaks of hills or mountains in the background, power poles, trees, or other things that stand out to the eye. Next is knowing the stall characteristics of the model that I am flying. Anytime I fly a new model I like to take her up to altitude once I know everything is working as it should and pull the throttle back. I then apply more and more elevator until I reach stall and see what the plane’s response is. This will remove any surprises when I am on final and altitude is at a premium. These two pointers can help save a number of models if you take the time to utilize them anytime you are at a new field or flying a new model.

Although it’s not a warbird, you can use the steps in this article to help increase your success rate when landing aerobatic biplanes like the Checkmate pictured here.

Notice the nose level attitude while landing this warbird. The increased airspeed helps to maintain rudder authority on touchdown.

Of the different configurations of models, the tail-dragger plane is definitely more difficult to land well. Of course, we have to count out the “floaty” 3D models and aerobatic planes such as the Extras and Edges that are so popular.

In general, our models are not difficult to land. Even most of our “heavy-metal” warbird models are so lightly wing loaded that they really don’t qualify as a “difficult” to land aircraft. However, even though they don’t have high wing loading, the fact that many of them are tail draggers makes this the “trickiest” class to land so we will focus here.

So, what qualifies as a good landing with a tail-dragging warbird? To me, it is a nice, 2-point touchdown with no bounces and a controlled rollout. The most common mistake we make, as modelers, is not carrying enough speed when landing our warbirds. Just because the wing will fly down to a walking pace does not mean that is the speed we should land these models. Landing too slow will cause the bounces and uncontrolled rollout previously mentioned.

I will first address airspeed. I like to land my models about 5 to 10mph above stall speed. This keeps enough airflow traveling over the vertical fin and rudder to control yaw on touchdown as well as over the horizontal stab and elevator to keep enough pitch authority to minimize bouncing.

The next point of conversation is the attitude of the model. Unlike the 3D aerobatic planes we want to come in with the nose fairly level. Try to avoid coming in nose high like a jet fighter. This just leads to trouble.

The third bullet point would be the flare. Since we have ample airspeed to keep the plane flying the flare is going to be more of a leveling out. I like to flare at about 6 inches above the runway. Once I level the plane off at this altitude, I will pull the throttle back to idle and allow the plane to slow. As the wheels get to the point of contact with the tarmac I will slowly release the back pressure on the elevator lessening the tendency of the tail to drop which creates a positive angle of attack of the wings, which will ultimately lead to the model taking to the skies again unintentionally.

Once the main wheels are solidly on the ground, I focus on my rudder control and be sure to keep the model tracking as close to the centerline as possible.

Finally, once my plane’s air speed is below flight speed, I will slowly add the up-elevator back in to firmly plant the tailwheel on the ground to avoid the undesirable nose over that we have all witnessed at the field.

If you take the tips above and focus on improving your skills one at a time, you definitely will see an improvement in your landing skills. All of the above points have proper timing. Additionally, every model you fly will require different timing for each of the points. Be patient and work on each step one at a time with every model you fly. Eventually, everything above will become second nature and you will not hesitate to fly any new model no matter how “scary” it is supposed to be on landing. Now get out there and shoot some landings!   By Jason Benson