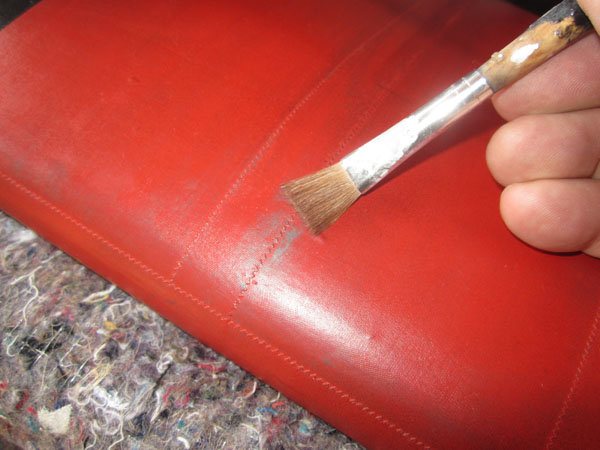 So you’ve finished painting your new scale airplane and it looks nice and shiny and brand new. You check your model one more time against your photo documents of the full-size plane and there’s something just not quite right… What is it? Well, it would be a safe guess that your full size subject airplane, even if is a nice and shiny freshly painted aircraft, when you look at it, it will seem toned down a little bit. It’s just not as shiny and crisp as your model. Why? The answer is a little surprising. 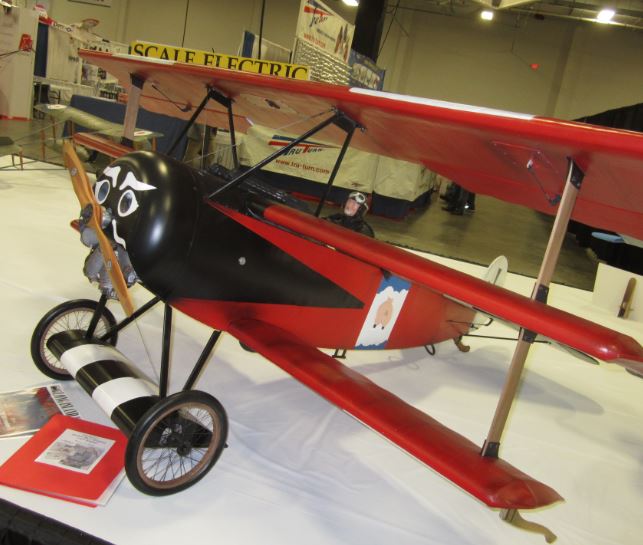 (Above) My Balsa USA 1/3-scale Fokker Triplane, with the weathering technique described in this article, was good enough to win First Place in the popular World War I class at the WRAM show.

Say your new model is 1/4-scale. So, if you look at your model and then look at your full size subject, if they are viewed so they are relatively the same length, your full size plane would have to be four times away from you to be the same relative viewing size. So what? Well, there’s four times as much air between your eyes and your subject. This really does make a difference. And, there’s other very subtle differences even close up. The world is full of dust and grime, and airports and airfields are far from sterile environments. There’s dust in the hangars and even birds that deposit their markings on the planes that has to be cleaned away. So you see, for your model to look more scale, you have to compensate for the closer distance you view your plane from and you have to “dirty” it up a little. 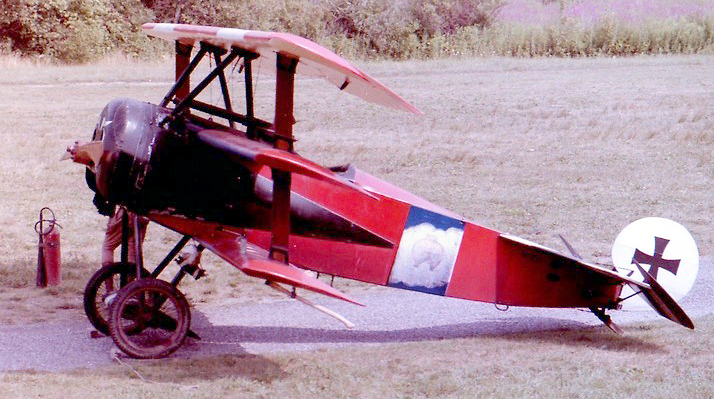 (Above) Here’s my subject aircraft. Not shiny new, but not rusting away either.

There’s an old saying that scale modelers live by. “When you think you have enough weathering added to your model, you have about three times too much!” So, I try to hold myself back and just as I can pick up the difference my bit of weathering adds to the surface, I stop. Also, I prefer to use materials that are easy to remove should I get too heavy handed. Some modelers add a dull flat clear coat to seal their weathering in place. I do it the other way around. To help kill the brightness of a freshly painted model, I will shoot a very light mist of flat clear over the surfaces. Just enough to kill that sheen. Then, I apply my weathering to specific places that the eyes are drawn too. Not the entire model. 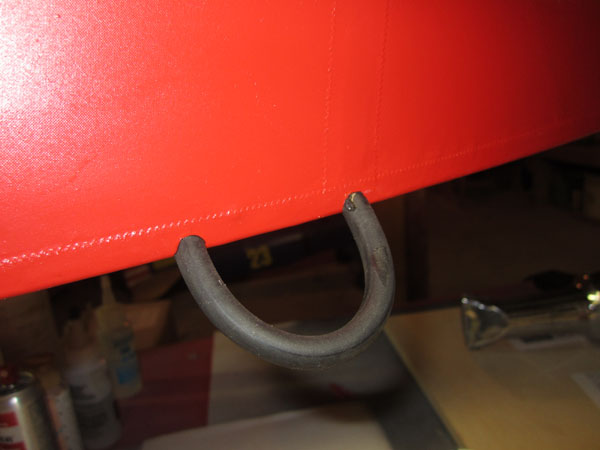 (Above) Here’s the aft fuselage hand hold on the model. It was installed before the model was weathered. Everything looks too new and unused. 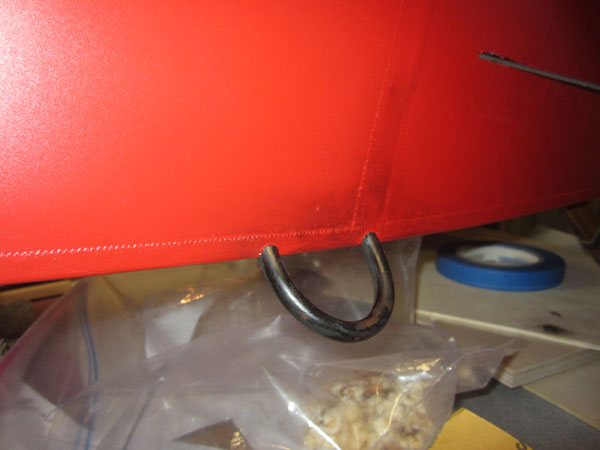 After all, our airplane is suppose to be “airworthy”, not a long forgotten derelict. I concentrate on those places where mechanics and handlers would actually be touching the plane when they worked and moved the airplane around the airport. Wingtips, hand holds, foot steps, and along panels that would be removed and replaced on a regular basis.

One thing that will help you a lot is to know that there is no true black or white used in the weathering process. You can save a lot of tone adjustment but cutting your white and black paint with a little gray. If you make a WW1 airplane, like my Balsa USA 1/3-scale Triplane, instead of painting all your white surfaces with bright insignia white, that you later need to tone done, use a very light gray instead. The tone of gray can vary depending on the overall color of your plane.

There is a color called Juneau white, that works great on scale models. Applied to a model that is a bright color, it looks to all the world as true white, but if you apply it over insignia, or bright true white, you can see it is actually a tone of gray. 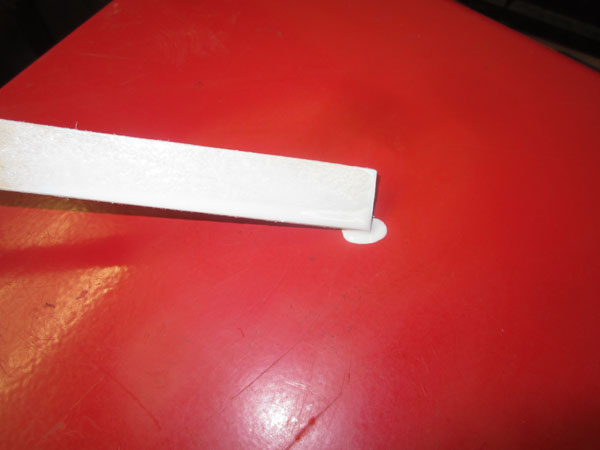 (Above) Here is a stirring stick I dipped into my can of Juneau White. I show it on top of my red tool box. Looks white to me right!? 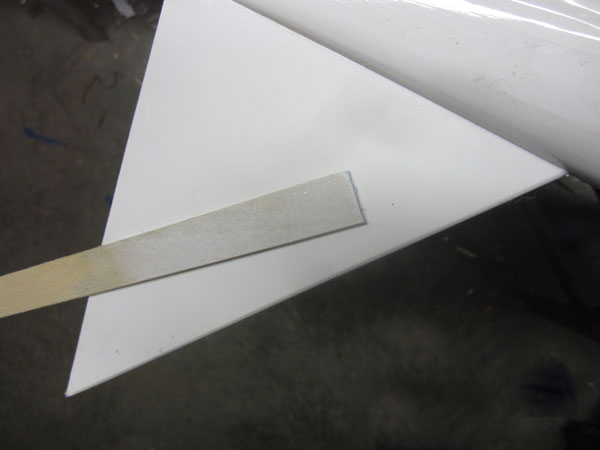 (Above) Same stick about 30 seconds later placed over a white control surface. Yep! It’s actually a light shade of gray.

The same is true for black. I like to cut my black paint with a bit of brown and some yellow to cut that empty black tone. Even adding a little dark blue will make black look better. Then, when it comes to aging parts that are painted black, I use various shades of gray.

This will also help you be more subtle with your weathering. By first spraying a model like my triplane a true base color of Tennessee red. I then make a small batch of lighter and darker toned red. I lightly mist the lighter red to the upper surfaces since the real airplane has faded a bit, and then on the lower and bottom surfaces, I add the darker tone of red. The lighter tone of red is made using the white as a base color and the red added, and the darker tone starts with the red and brown and gray is added to it. If you do this correctly, you can not see the demarcation lines of one tone over the other. Again, the secret of realism is being subtle.

If you are really a sport modeler at heart and just want to paint your model and go fly, then a lot of realism can be accomplished with just a little bit of dirt, grime and smudging. My old stand by is pencil graphite. Use a coarse grit of sandpaper and rub a pencil tip, (I like using mechanical pencil lead,) on it and collect the dark dust in a small container. 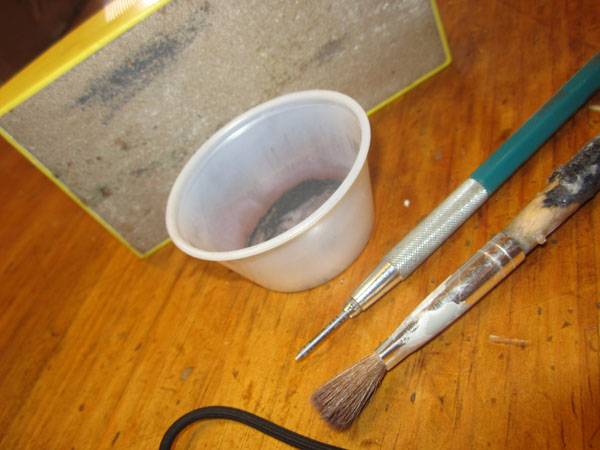 (Above) Tools of the trade.

What’s very cool about graphite dust, is that it is not solid black! It is actually a dark tone of gray. This is great because you can use it on any color. I like to use an old soft paint brush to apply the dust to the model in long stokes to create a light long smudge. 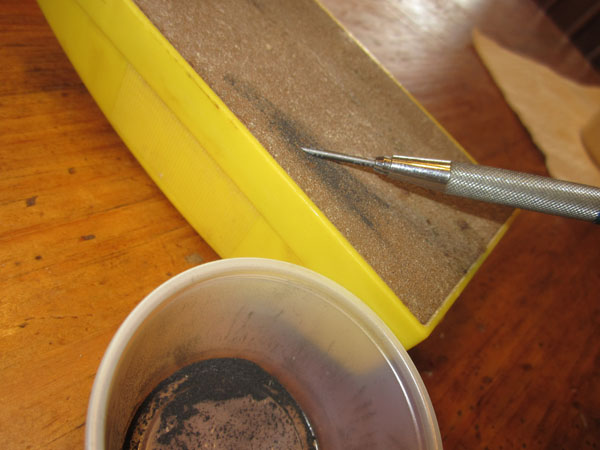 (Above) Collecting the dust in a small container is a lot cleaner than trying to use it on a piece of paper. 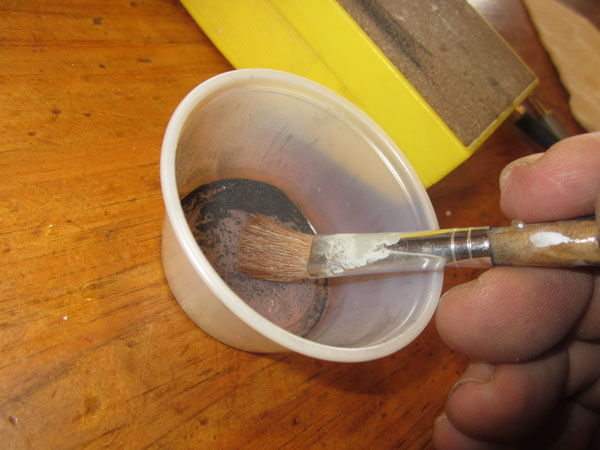 (Above) An old soft paint brush is used to apply the dust like eye shadow!

(Above) Grime and dust collects along fine edges like on rib tapes.

For areas where you want more you can scrub the area with the brush. If you want even more dark tone, you can simply use your finger tip to really work it down into the weave of the cloth. And, here’s the best part, if you add too much or you do not like the appearance you can simply wipe it away with a moist paper towel. 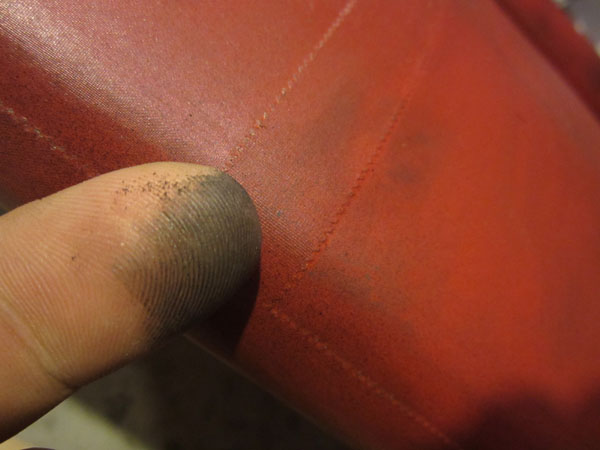 (Above) Finger smudging is quick and easy and makes a big difference. The graphite darkens lighter colors. 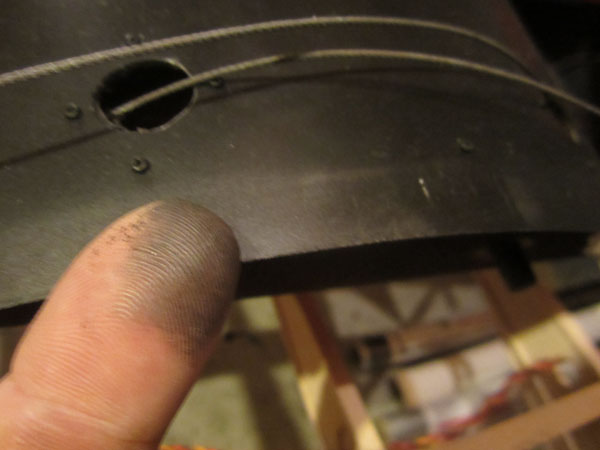 (Above) the same dust applied to a dark panel edge adds a lighter effect that looks like signs of wear.

I add the dark grime along rib stitching on the wings especially in the propeller blast areas that would see a fair share of engine oil. I also do the white areas on the tail as well to produce that used looks. Another place to add steaks of dust is behind any control surface hinges, but just a little to give the impression that a bit of oil has run back from the hinge pins. 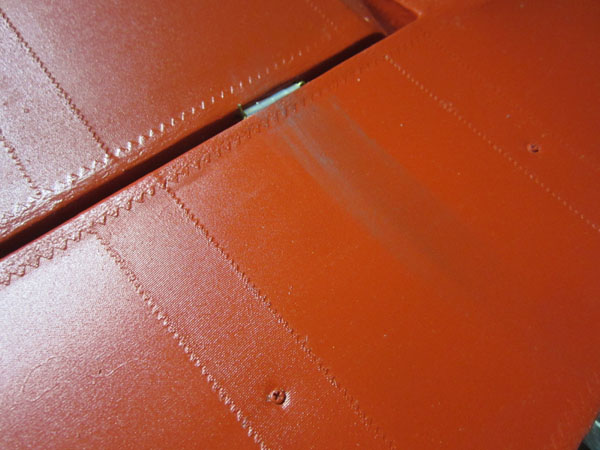 (Above) Here behind the aileron hinge, you see the graphite dust is not black, but a shade of gray. Yes the Dubro hinge has to be painted a dark brown to look scale. 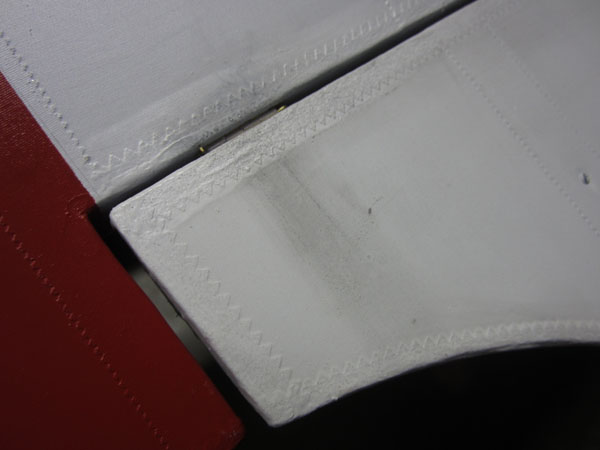 (Above) Some more hinge streaking. Subtle but definitely convincing. 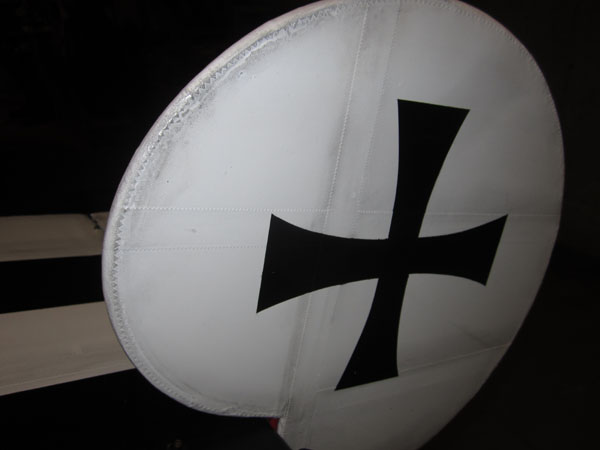 (Above) Without weathering, the Fokker’s big white rudder, just looks too bright and new. 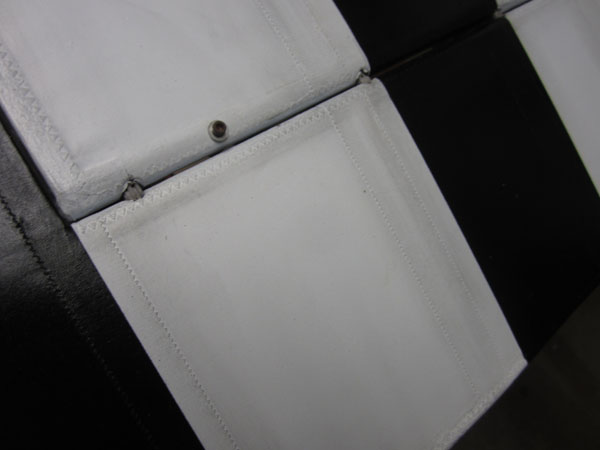 (Above) Here’s the stabilizer and elevator with the white toned way down with graphite smudging.

So that’s it. When we talk scale planes we are taking dirty! But not so dirty that it makes the airplane look like a wreck. Again, the secret is to be subtle. Viewed from far away, your model will look much more like the real thing, and up close, the details will pop! 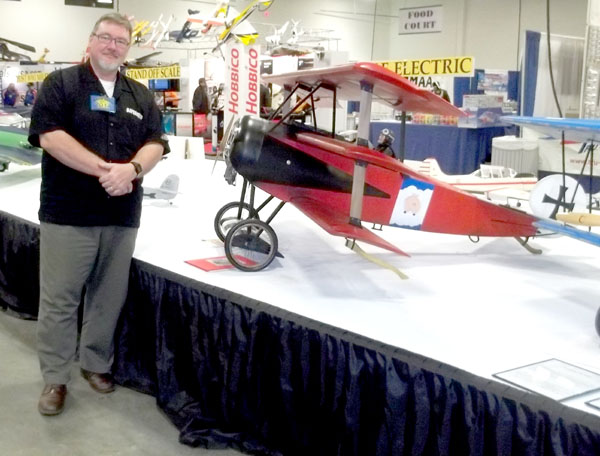