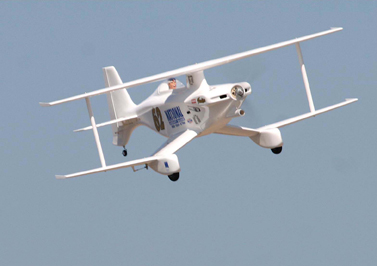 I really enjoy flying RC aircraft of all kinds, but some of my favorites are Formula One pylon racers. I wanted a race plane that I could prop for speed, but I also wanted to be able to try propellers that would produce good torque. I also wanted a plane that would allow me to do some sport aerobatics. One of my favorites is the Kyosho Phantom 70 EP. It is no 3D monster aerobat, but it will do a fair amount of maneuvers, so for my testing this was a perfect aircraft.

Let’s take a closer look at this high-quality Kyosho race aircraft. Both the GP (glow) and EP (electric) versions of this model have high-quality fiberglass parts that include the fuselage, wheel pants and cowl. The EP fuselage is one piece without a cowl but with a large battery access door on the bottom. It has the firewall epoxied to the front of the fuselage and a battery tray glued in right under the hatch opening. You can attach your battery to the plywood plate with Velcro and then bolt this plate to the tray in different locations so you can move the battery to achieve the perfect balance. The wings and stabilizers on both kits are the same using balsa and plywood construction with heat-shrink covering. The hardware package is complete and includes everything you need to finish up your aircraft. The construction manual is type specific and mine included everything on installing all the electric components. 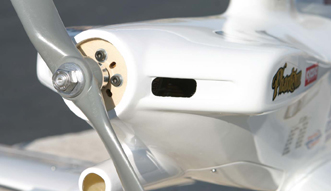 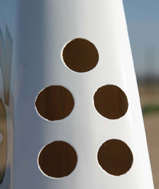 Vent holes on the bottom of the fuselage keep the power system cool.

After the stabilizer is epoxied in place and the elevators and rudder are hinged, it’s time to install the motor. Before doing that I decided to reinforce the firewall because I will be using a powerful Axi 4130/16 moto rand swapping out props for testing. I stood the fuselage on its nose and used a mixture of BSI 15-minute epoxy and micro balloons to form a bead of epoxy around the firewall. Be careful not to get any this on the firewall face because it will affect the way the motor sits again the wood. I really like BSI 15-minute epoxy because it sets up up faster than the 20-minute stuff but still has plenty of working time. After I bolted the motor to the firewall, I attached the ESC inside the fuselage with Velcro.

The equipment I used on the ground for testing included the AstroFlight Watt meter and a Cermark One Touch Tachometer.Once the plane got airborne the information was gathered through the Eagle Tree Micro-Power E-Logger (eagletreesystems.com). We clocked the first three passes with a radar gun to get the average speed. Fortunately there was no wind on the test day that would affect the speed. I used a 5000mAh 6s battery pack for each test. I fully charged each battery the day before the test. I flew the plane for 7 minutes and the packs only required 2300 to 3000mAh to recharge them, so I could easily get about 10 minutes of flight time. All of my numbers are taken from the beginning of the flight when the battery has the most power. So let’s see how the testing went.

The Xoar was the only wooden one we tested that is made especially for electrics. This prop is a nice looking blade and should hold its pitch with little or no flexing in the air. The ground numbers were 15.4 amps at 21.9 volts. This combination was producing about 335 watts at 7,650rpm. Once in the air, on average, the motor was pulling 15.3 amps at 21.75volts and producing 335 watts. The plane took up about the same length of the runway to get into the air but once in the air the Phantom performed aerobatics almost the same as the APC prop 15x8E with up-lines almost identical as the other props. This wooden prop seems to pull the plane through maneuvers without slowing down. I was really surprised at how low all of our readings were especially when our average speed on the three passes with this prop was 70mph. 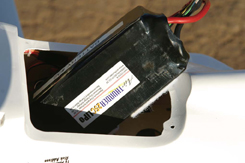 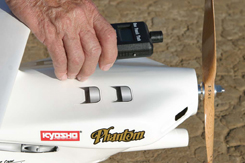