I have scratch built many twins over the years. No matter whose plans I’m working with they all shared one thing in common. Very poor detail when it comes to nacelle construction.

Below is a photo of the plans for the nacelle. You will notice the very complex retract apparatus drawn. The plans were clearly created before the availability of self-contained retract mechanisms. While I’m sure this design may have worked. I wasn’t about to go to this much trouble for retractable landing gear. To many opportunities for this system to fail or have in flight problems. 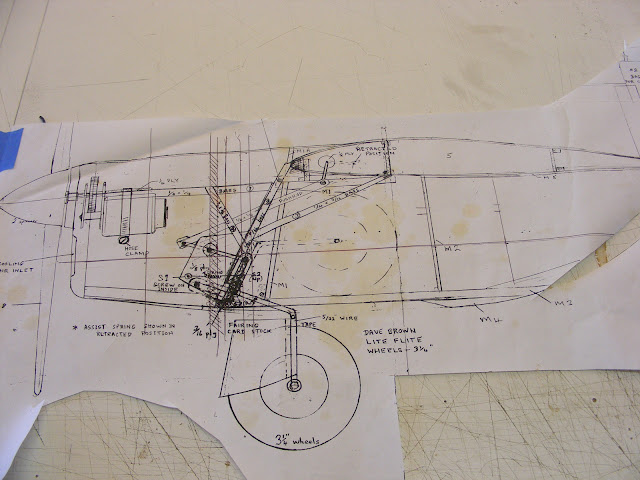 The solution was mad easy by advances in retract design. I simply founds a set of self-contained retracts with struts and used these instead. It did necessitate some redesign work on the nacelles but the retracts work great and are simple to install and remove as deeded. 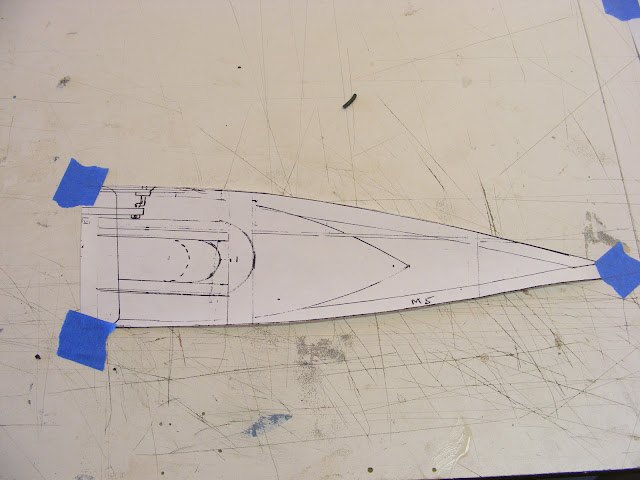 These three photos of the nacelle plans were all that I had to work with. A lot of guess-work and I had a set of nacelles with retractable gear. I’ve done may scratch build twin and none of the plans offer much help in the construction of nacelles. I guess they think we should be able to create contours with little or no detail. I’m always puzzled why so little detail is provided for building nacelles. 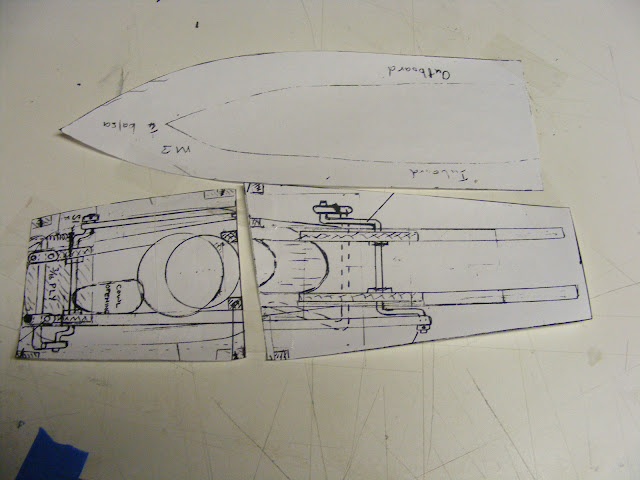 I fabricated  mounting plates from 3/32 plywood. Then added a 3/32 plywood doubler for extra strength. The large cut out toward the rear of the mounting plate is the servo mounting position. After looking at this you may be saying to yourself. I would have used thicker material for this application. You would be right. Accept for two key factors. One of course is the weight heavy materials create. The second and for me the more important factor was strength, or lack there of. When designing landing gear one should always allow for the bad landing. In other words if I’m going to do damage to my plane in the event of a poor landing Where do I want the damage to occur. You see you have a choice as to what breaks. You have no choice as to whether or not something breaks. With is in mind I chose to have the screws holding the gear in place be my weak link. Better the screws strip out of the wood  than shatter the nacelles or break the wing. That’s why I used thinner materials for the landing gear plates. 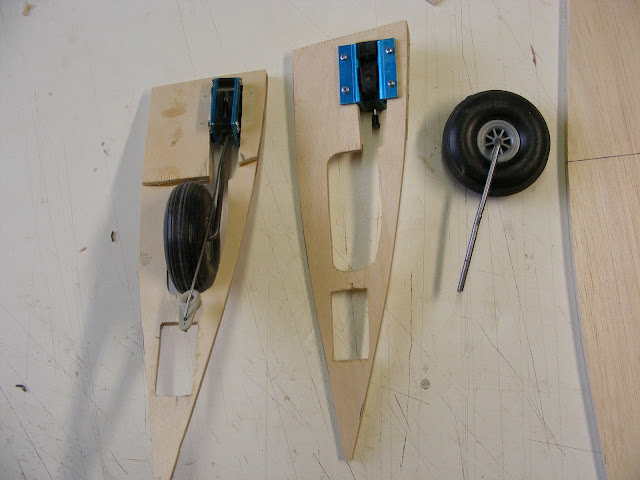 Over the years I’ve done a great deal of repairs for friends with large 3D aircraft. It seems the larger aircraft all share one  common characteristic. Week landing gear blocks. The planes come with stout enough struts but the wooden blocks they attach to always seem to tear out during  a rough landing. When this happens the are done flying for the day or longer pending the repair. My solution was simple. Change the location of the failure. I routinely install heavy plywood reinforcement to the structure to insure the blocks remain fix in the airplane. Rather than using blind nuts and bolts to attach the landing gear struts I use # 8 3/4-in wood screws. This way if they experience a rough landing the screws pull out and not the blocks. Little damage is done to the airframe. It takes a pretty rough landing to pull the screws loose so don’t be too concerned. Just insert a few tooth picks in each screw hole and remount the landing gear. Every modification like this I’ve done has proven to be very successful and the plane owners love it. Only problem is I don’t get as much repair work on their plane after this modification.

An upper former plate was created. The former plates were then laid on the plans. Spacer material was used to position and attach the upper and lower plates together. See photos below for more detail. 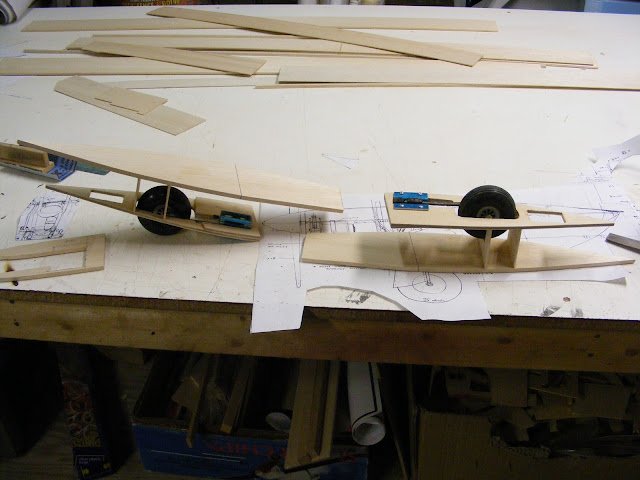 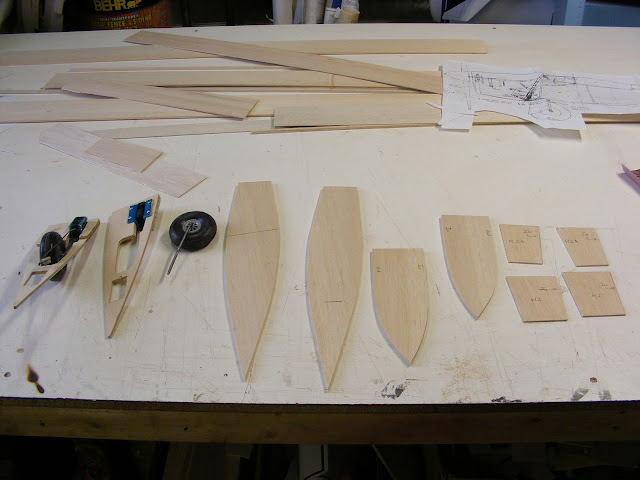 The landing gear mounts, struts and wheels were installed temporarily to insure fit and smooth operation. A bottom former plate was made to complete the sub structure. 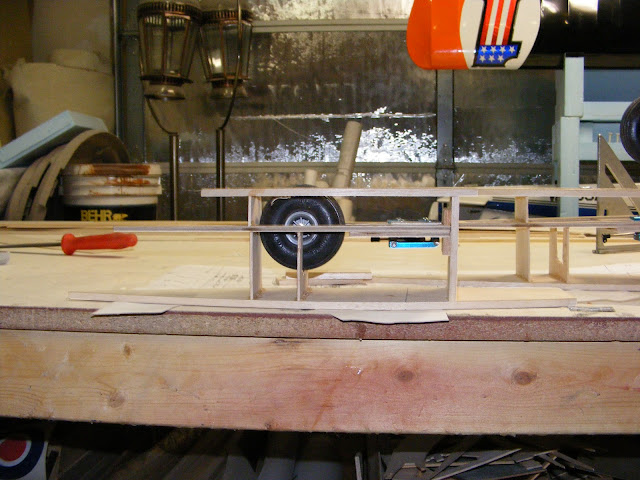 Many tests and adjustments were necessary to obtain optimal operation. Including mounting the servo and cycling numerous times. At last success! 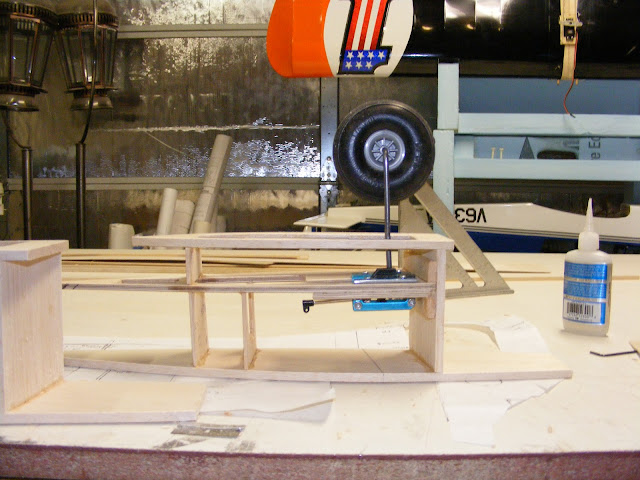 After the structure was completed,  just wrap with 3/32 balsa and sand to shape. Create removable cowls for access to your motor(s).

Sorry no other pic’s of the nacelles

Next time, the tail section