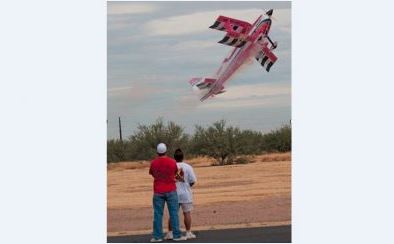 A major cornerstone of 3D flying, the harrier pass consists of flying an airplane at a very high angle of attack at a very low airspeed. In this “high alpha” or post-stall position, it can be said that the plane is flying more on the prop than on the wing. Control during a harrier is primarily maintained by the propwash over the tail surfaces. As a 3D pilot, you need to think of throttle as “control.” If you try to maximize control during a harrier by maintaining a higher throttle position, the airplane may climb or accelerate.

On the other hand, if you wait until the controls are no longer effective to start to add power, you may not recover control in time to save the maneuver. You need to smoothly pump the throttle during a harrier to maintain propwash over the tail surfaces without holding the higher throttle position long enough to cause the airplane to accelerate. The objective is to pump the throttle to maintain control and altitude. The instant you sense the controls becoming ineffective, or if the plane starts to descend, give the throttle a little extra boost. You’ll also find that you can respond more quickly when you’re continually pumping the throttle, than if the throttle is stationary. To maintain the same height during a harrier, the amplitude or range of the throttle movements is usually between quarter and half throttle, with an airplane capable of hovering at half throttle. If you lose complete control at these very low airspeeds, often the only way to regain control/recover is to go to full power.

All the maneuvers featured in this 3D flying series are flown on high rate flight mode.

The simplest way to enter a harrier is to slow down to nearly stall speed, and then smoothly pull the nose up to establish a very high angle of attack while simultaneously adding power to maintain the same height.

Continually pump the elevator to maintain an approximate 45-degree fuselage angle during the harrier pass, i.e., raise and lower the nose by increasing and decreasing the size of your elevator adjustments.

While both the left and right wings are deeply stalled during the harrier, they tend not to stall exactly the same, and consequently, the wings tend to rock from side to side. Every airplane has a certain fuse-lage angle or “sweet spot” during a harrier that results in the least amount of wing rocking. That angle is usually close to 45 degrees, and it usually takes about half elevator to achieve it. You will then find that it takes constant elevator adjustments to maintain that angle due to the fact that airplanes are not designed to fly this way. Note that if you are late with any elevator adjustments, it will take a much larger input to recover, thus increasing the potential for over-controlling. Smoothly pump the elevator throughout the harrier to keep your fingers nimble and ready to instantly respond to the needs of the moment. Inputting a series of smaller adjustments, rather than waiting to respond with larger adjustments, ultimately reduces the potential for over-controlling.

Hold in right rudder to correct for propwash and P-factor left turning tendencies. Correct deviations with small brief bumps of rudder and coordinate aileron and rudder to keep the wings level.

Rudder is used throughout the harrier to correct course deviations and to steer the airplane. Most of the time, you’ll have to hold in right rudder to correct for the left turning tendencies of propwash and P-factor (asymmetric propeller thrust) encountered at high angles of attack. Use coordinated aileron and rudder inputs to keep the wings level. Note that adverse yaw will be significant any time you apply aileron at high angles of attack, so you must coordinate rudder with the aileron in the same direction when leveling the wings to prevent adverse yaw from causing the maneuver to unravel.

Most important, because airplanes are typically very unstable during high alpha flight, it is crucial that you keep your rudder and aileron corrections small and especially brief (i.e., “bumps”) to avoid aggravating the wing rocking phenomena.

An effective technique used to reduce wing rock is to activate the elevator-flap mix so that both ailerons raise up approximately 20-30% when holding in up-elevator. While you’re at it, you might as well program both ailerons to lower 20-30% with down-elevator to compliment future inverted 3D maneuvers (inverted harriers, elevators, etc.).

Mixing both ailerons up 20-30% with up elevator helps reduce wing rocking at extreme high angles of attack.

Turning while in a harrier attitude consists of steering with the rudder, using the ailerons to keep the wings level, and pumping the elevator and throttle to maintain the same fuselage angle and altitude.

As unstable as an airplane is during a harrier, in order to turn without over-controlling, you must limit your rudder inputs to brief nudges every few moments. Be sure to gently nudge the plane around the turn with rudder while applying opposite aileron to keep the wings level. Attempting to turn with the rudder alone at this high angle of attack would lower the wing on the inside of the turn, and doing this at a low airspeed could cause the airplane to sharply fall off to the side. You’ll need to apply opposite aileron throughout the turn to keep the wings level. Remember, if the wing on the inside of the turn drops, the plane can fall abruptly toward the ground, so always be ready during a harrier to punch the throttle to full in order to help with recovery. Once the turn is finished, continue using the rudder to steer, but switch to coordinating aileron and rudder in the same direction to keep the wings level.

Control the rate of turn during a harrier with rudder, and cross-control opposite aileron throughout the turn to keep the wings level.

Note:If the plane behaves strangely, as if it is responding to alien control inputs, it is most likely that the mix percentages you’re using are far too high. This would explain why odd things are happening during other maneuvers as well.

You should, of course, practice this maneuver on a simulator before attempting it in the field. Even though you will probably find that the simulator has a different feel than real-world 3D flying, sim practice will help sharpen your reflexes and get you in the habit of manipulating all the controls simultaneously. Remember, it helps if you keep your fingers moving when flying 3D and be ready to punch the throttle to full to recover when things unravel. Good luck.
TEXT & ILLUSTRATIONS BY DAVE SCOTT